‘I tripped on someone’s leg’: Geelong’s Chris Scott slams ‘silly’ Adelaide Oval as coaches have to walk through spectators

After being tripped in the crowd, Geelong coach Chris Scott says the need for coaches to walk through spectators at Adelaide Oval is ‘silly’.

And he has labelled South Australian government restrictions on his visiting AFL side as ‘arduous’.

Scott’s Cats downed Port Adelaide by 21 points on Thursday night after being given an exemption to enter a state which has closed its border to Victoria.

After being tripped in the crowd, Geelong coach Chris Scott says the need for coaches to walk through spectators at Adelaide Oval is ‘silly’

Geelong’s travelling party was tested for COVID-19 on arrival at Adelaide Airport, then taken by bus to Adelaide Oval where they waited four hours at an indoor cricket centre for their results.

But what struck Scott most was that he and his fellow coaches still had to make their way through the Adelaide Oval crowd to access the arena at breaks in the game.

At three quarter-time, Scott was tripped while being escorted through the crowd.

‘I tripped on someone’s leg so I said to the security guard, “Did he trip me or do you need to make sure that the legs aren’t popping out?”‘ Scott said post-game.

‘It was probably an accident. I’m not sure.

‘But strange situation, given the circumstances and the meticulous way in which the South Australian government has looked after us over the last 24 hours, was that we’re still walking in that close proximity, people are actually brushing past us in the crowd.

‘You can come up with a million examples of things that don’t make much sense [with coronavirus protocols].

‘But we should just focus on trying to jump into line and provide a good example for the rest of the public.’ 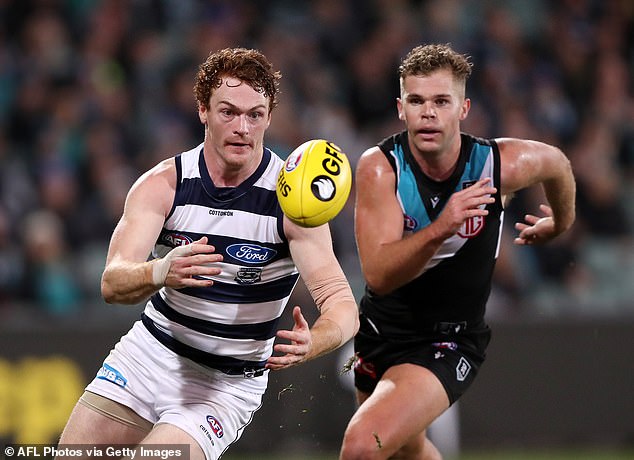 Adelaide Oval is the only AFL venue where coaching staff must walk through the crowd to enter the playing surface.

‘In the most respectful terms possible, when you have a stadium of this quality, renovated, and to overlook the fact that the coaches still have to walk through the crowd is a bit silly – especially in the circumstances we’re in at the moment,’ Scott said.

Geelong were due to fly out after the match but fog left them stranded in Adelaide and staying at a hotel for the night.

Scott described the pre-match wait at the cricket centre as ‘strange’.

‘Some of the pictures would have been quite comical; we have got guys sleeping under tablecloths trying to get some darkness,’ he said.

‘I’m trying to choose my words carefully. But if I was a little bit more of a crazy coach, looking around, I would have been a lot more worried than I was because there were some strange scenes.

‘But that is what the South Australian government chose to do.

‘The whole way through the pandemic, the rule of thumb has been not to point out the inconsistencies and the silliness of some sort of rules and just jump on board.’