AFL stars have said goodbye to their loved ones in emotional airport scenes, as they fled Victoria for quarantine hubs to minimise the risk of contracting or spreading coronavirus.

All ten Victorian clubs will spend at least 32 days interstate as their home state battles a second wave of the virus.

The embattled state recorded 127 new infections on Monday, as well as two deaths in 24 hours.

Melbourne Demons and Geelong Cats players left on Sunday night bound for Sydney, and were seen kissing and hugging loved ones.

A number of players will spend four weeks separated from their families, with Demons Alex Neal-Bullen and Sam Weideman among those spotted at Melbourne Airport in romantic farewells. 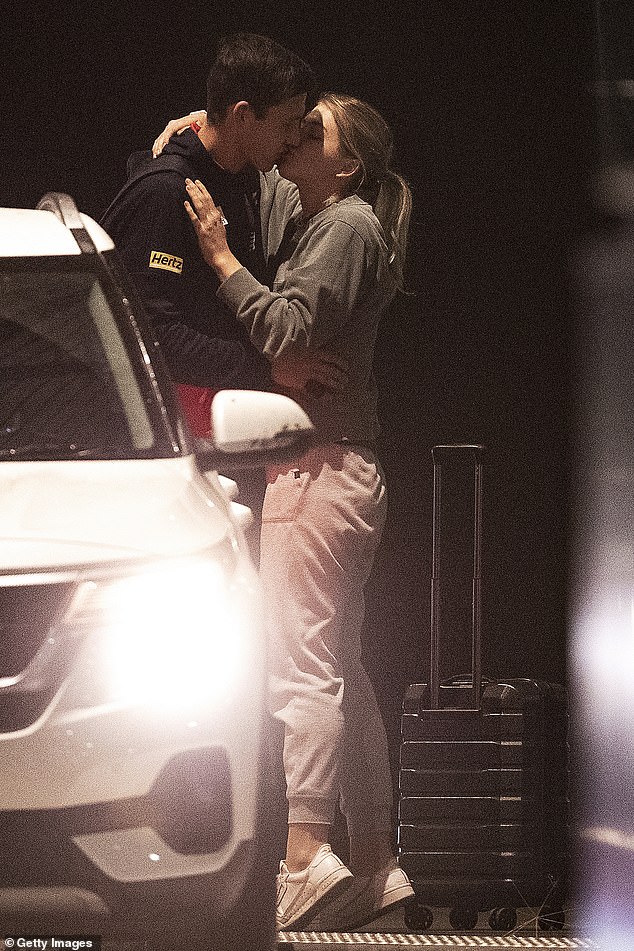 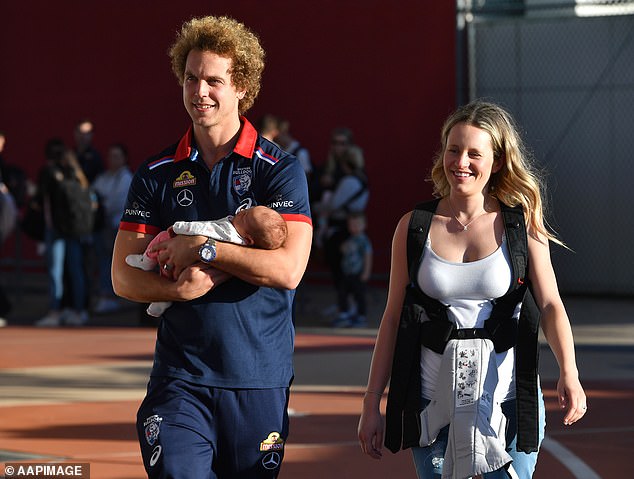 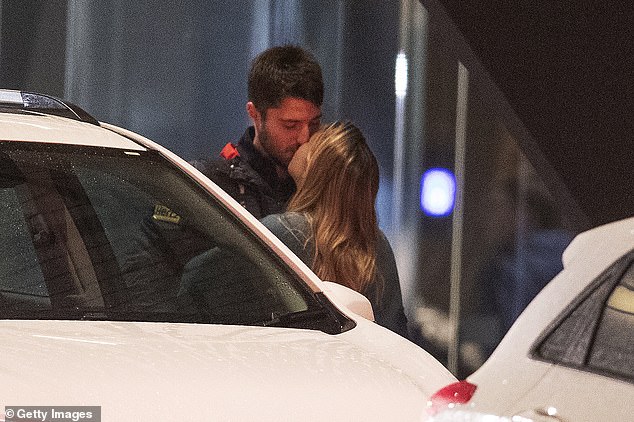 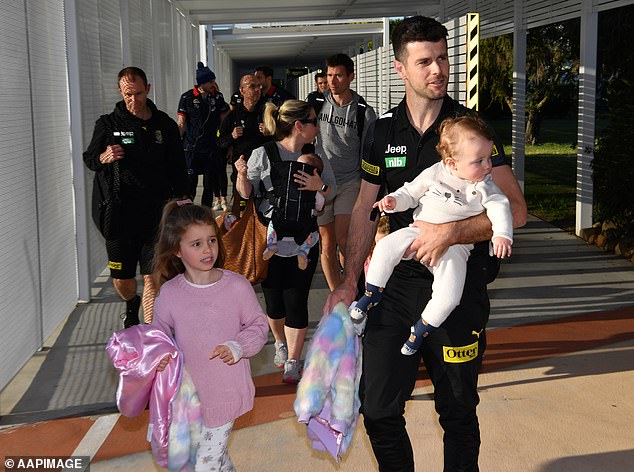 The Essendon and North Melbourne squads touched down on the Gold Coast on Monday afternoon.

A host of stars who couldn’t bear the thought of being apart from their young families for so long have been joined by their partners and children in the quarantine hubs. 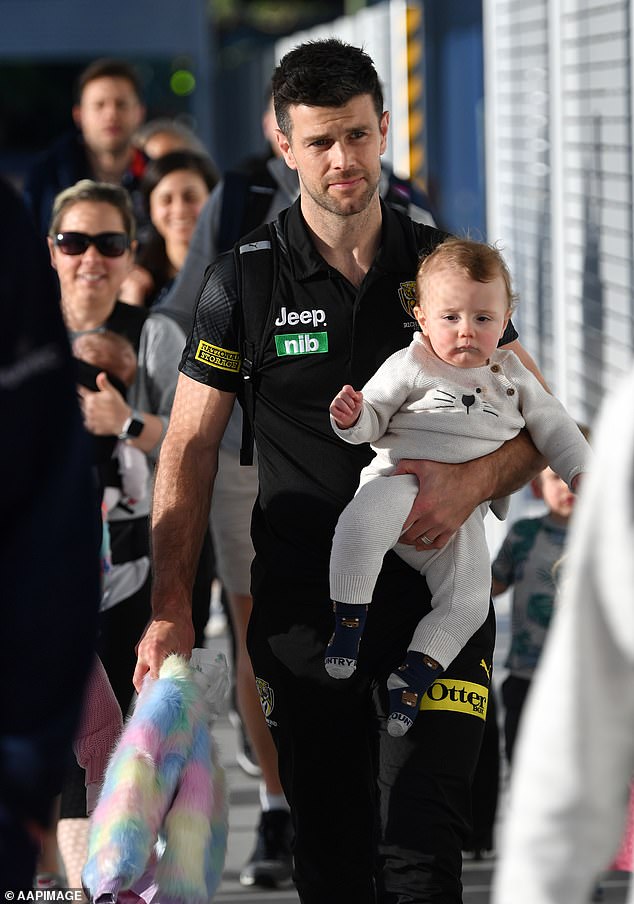 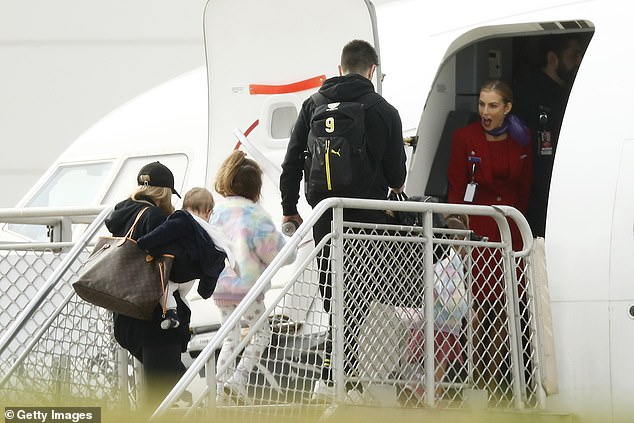 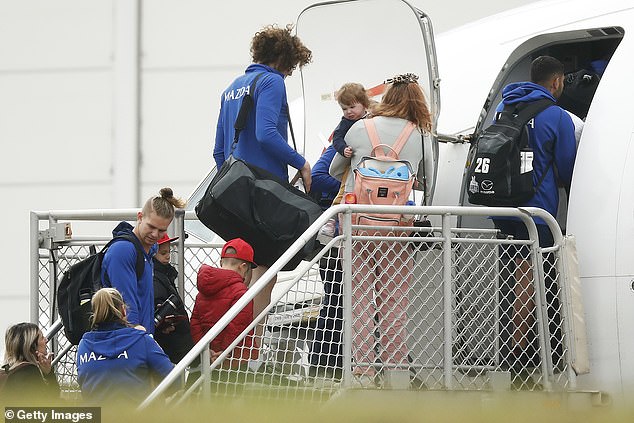 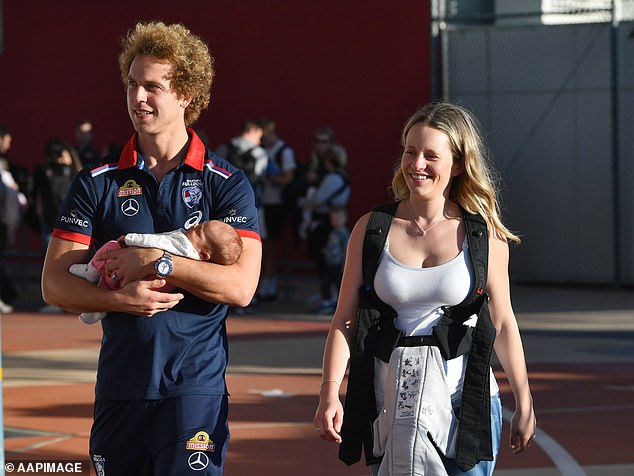 Tigers superstar Dustin Martin appeared to be in good spirits as he boarded the plane bound for Noosa on Queensland’s Sunshine Coast.

Two Richmond premiership stars elected not to join the hub and will therefore be unavailable for many weeks: Bachar Houli, whose daughter was born last week, and Shaun Edwards, whose wife is heavily pregnant.

Also seen boarding the Bombers flight was Conor McMcKenna, who tested positive after his offseason trip to his native Ireland, and will be available for selection for his first game of the season this weekend.

The Hawthorn Hawks were already in Sydney and lost to GWS Giants on Sunday. 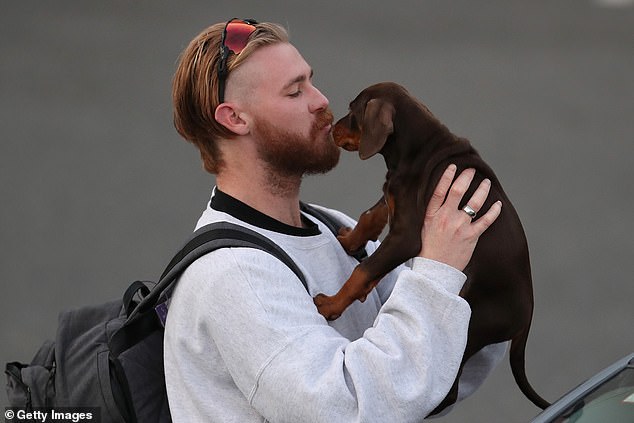 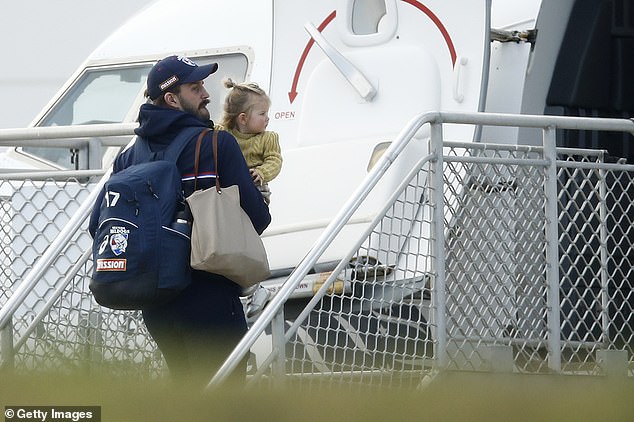 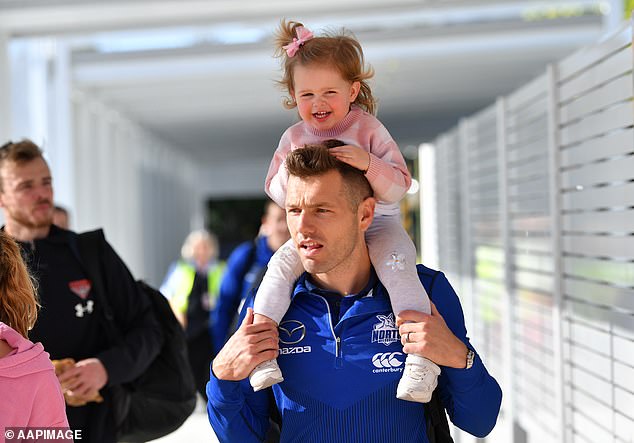 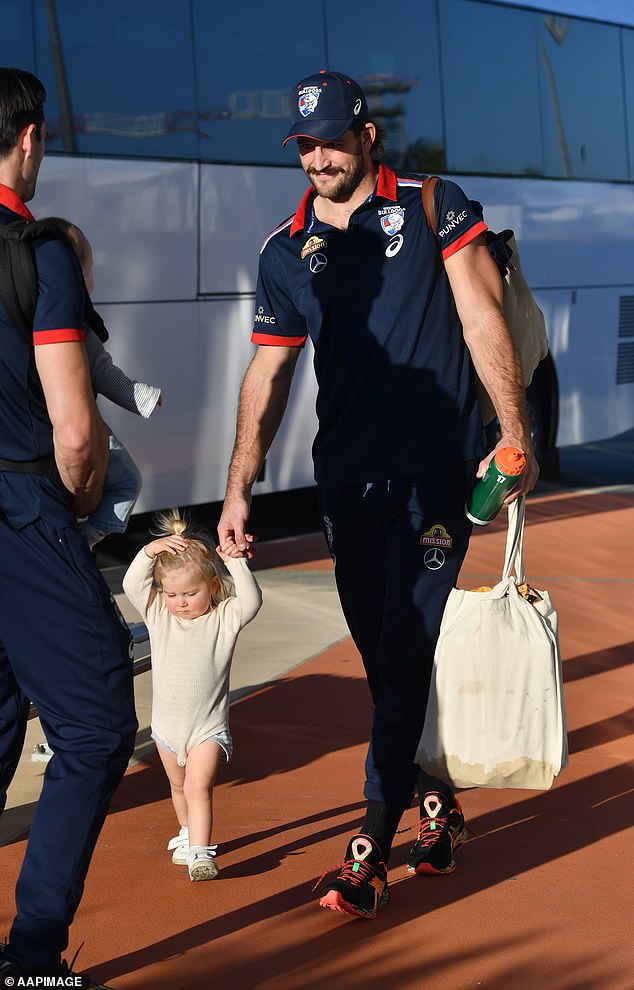 They will remain at their hub in the beachside suburb of Coogee for at least one month.

The Demons will also remain in Sydney.

St Kilda and Carlton had also headed north to Noosa and the Gold Coast respectively.

Geelong will spend a week Sydney before heading west to be part of the Perth hub along with Collingwood, who will also head to Sydney first for this weekend’s clash against the Hawks.

AFL chief executive Gillon McLachlan said the plan was for Victorian teams to return home after living away during a stretch of 45 games in 32 days, but that could change. 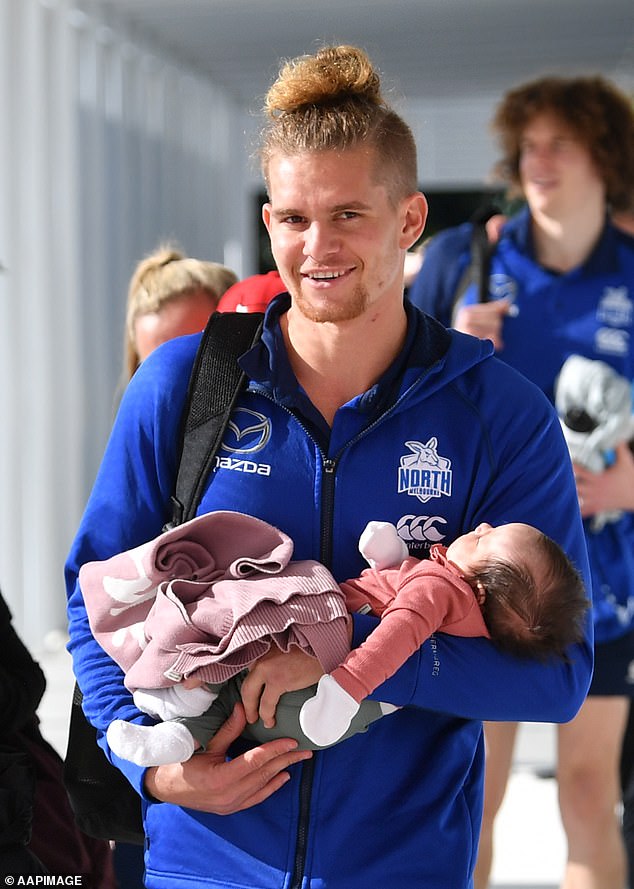 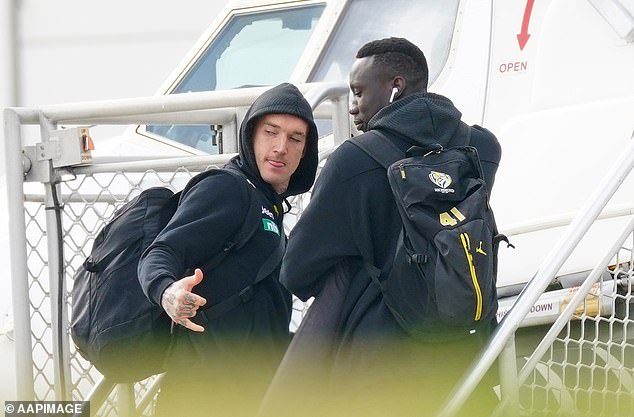 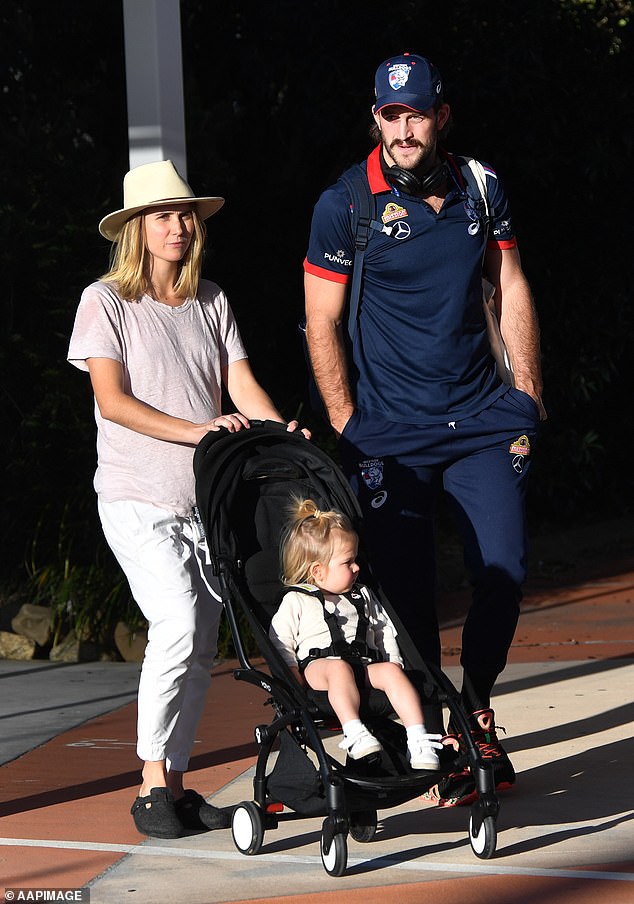 ‘The Victorian clubs now temporarily moving interstate are playing their part in ensuring our season endures in a year that will continue to challenge us all,’ McLachlan told reporters on Friday.

‘We will reassess our options depending on the COVID-19 situation across the country.

‘Everyone has to shoulder the load and bear the pain … we will work to make sure that by the end of the year it is as equitable as it can be.’ 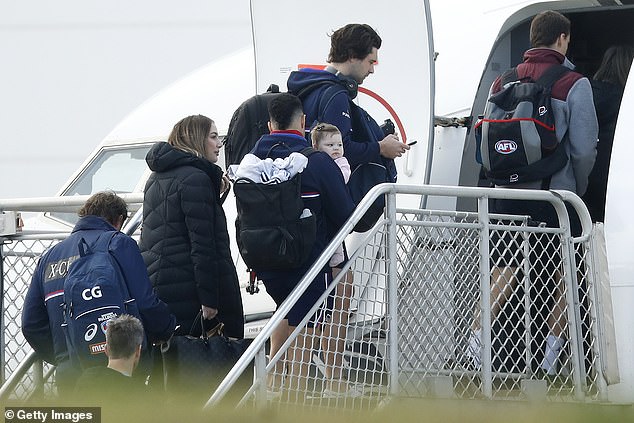 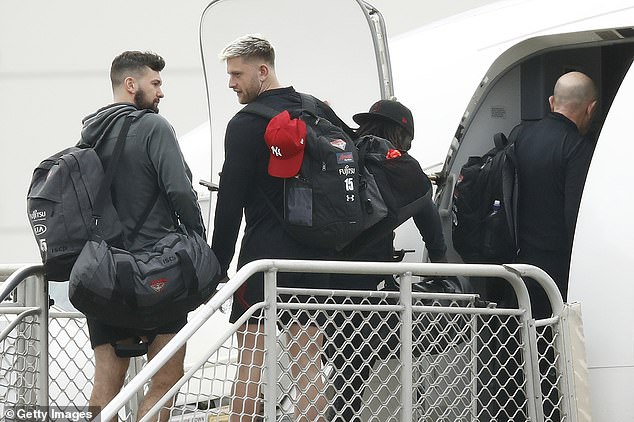 Essendon Bombers Conor McKenna (pictured, left) and Jayden Laverde (right) boarded their flight for the Gold Coast. McKenna could play his first game in 2020 after a coronavirus scare

Mum reveals how she makes 30 meals for $2.50 a serve – and how she stores them to save space

Japanese girl, three, starves to death after her mother left her alone for eight days

July 9, 2020
Comments Off on Japanese girl, three, starves to death after her mother left her alone for eight days

WA Broome helicopter crash girl Amber, 12, killed in accident that killed her friend and her father

July 9, 2020
Comments Off on WA Broome helicopter crash girl Amber, 12, killed in accident that killed her friend and her father

August 5, 2020
Comments Off on You can now buy indulgent Bubble O’Bill COCKTAILS for $18 – but you’ll have to be quick

August 5, 2020
Comments Off on Granddaughter blasts Victorians who flout lockdown – after BOTH grandparents die from COVID-19

August 5, 2020
Comments Off on Thousands of Australian workers are set for a HUGE boost in their superannuation

Kindergarten Cop is CANCELED and compared to Birth Of A Nation

August 5, 2020
Comments Off on Kindergarten Cop is CANCELED and compared to Birth Of A Nation