Yet another AFL coach has split from his long-term partner after a tumultuous 2020 season that saw teams constrained to living in Covid bubbles.

The two have three teenage children and got hitched in 2005, but the former couple have been living apart for the past three months, the Herald Sunreported.

Melbourne Football Club coach Simon Goodwin has separated from his teenage sweetheart Maggie, ending their 15 years of marriage (pictured together)

Goodwin joined the Demons in 2016 from Essendon and had a stellar playing career racking up 275 games for the Adelaide Crows, winning two premierships.

He is the third AFL coach in the 12 months to separate from his wife.

In December, Collingwood head coach Nathan Buckley and his partner Tania called it quits after 18 years of marriage.

When Goodwin was appointed to take over at the Demons he told reporters that he owed his success to his beloved wife Maggie who had stuck by his side through thick and thin. 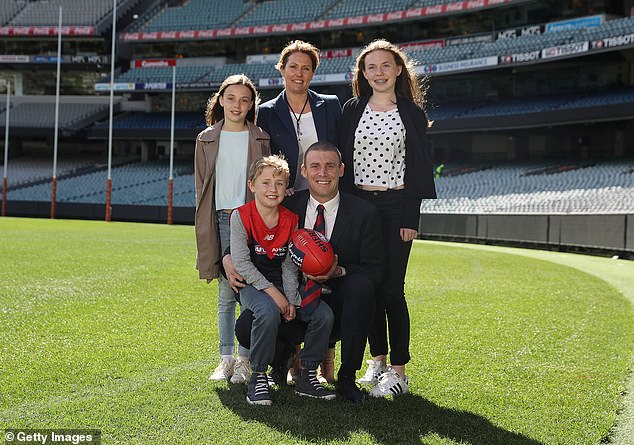 Simon Goodwin coach of the Demons, poses with his wife and children, Isabella, Maggie, Lilly and Eddie after a Melbourne Demons AFL press conference at Melbourne Cricket Ground on September 14, 2016 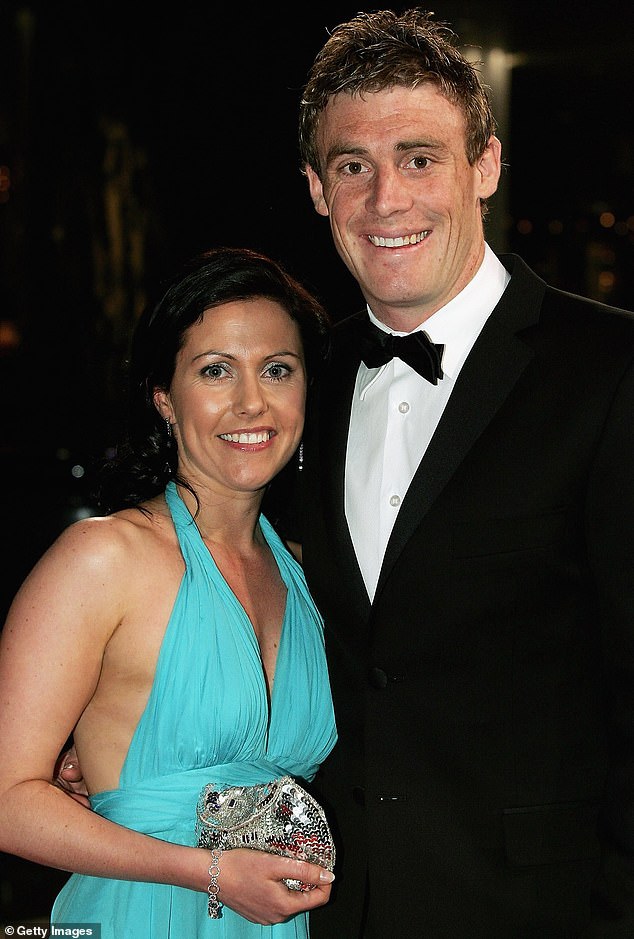 Simon Goodwin, formerly of the Adelaide Crows, poses with his then wife Maggie Goodwin at the 2006 AFL Brownlow Medal Dinner at Crown Casino September 25, 2006

‘She’s supported me through all of the challenges in my life. We live in a really selfish industry in a lot of ways, especially as a player and also now as a coach.

‘It’s such a selfish industry and she’s had to sustain a lot, and she’s pulled me into line when she’s needed to — I’ve needed that a few times that’s for sure.’

While the relationship may be over, the couple are reportedly still on good terms and recently attended a wedding together over the new year break in South Australia.

Due to border shutdown and social-distancing restrictions in 2020, players, coaching staff and many of their families were forced to live in hotel bubbles.

It is not clear whether the gruelling Covid-interrupted 2020 season added to the couple’s woes.

But another high-profile marriage breakdown in the AFL suggests the strains of living the bubble may have played a role. 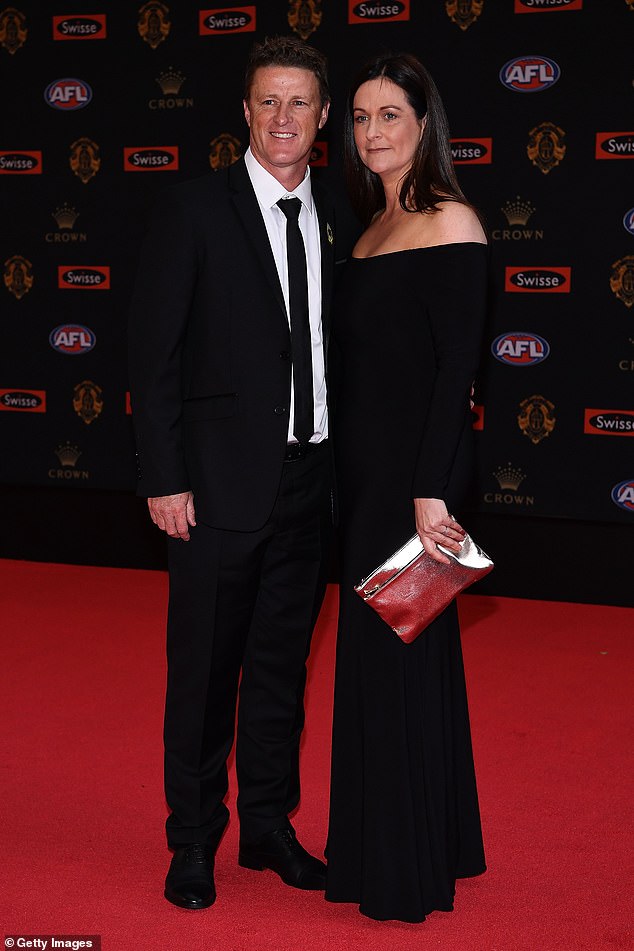 It comes after the estranged wife of premiership-winning AFL coach Damien Hardwick shared an explicit post after his relationship with a young staffer was exposed.

Danielle Hardwick shared a post to her private Instagram account which read: ‘F**k every single person that took advantage of your kindness and mistook it for weakness.’

The message, which was uploaded on Tuesday, comes as details of her husband’s new relationship became public.

Hardwick’s new lover has been revealed as his club’s own sales representative, Alexandra Crow.

Ms Crow had been spotted with Hardwick in the lead-up to Christmas, drinking openly with him at a busy Melbourne rooftop pub.

One witness told Daily Mail Australia the pair did not appear to be having a good time.

‘They seemed stressed. Unhappy. But we instantly noticed it was Hardwick with someone who wasn’t his wife,’ the source said.

Hardwick’s relationship with the young Richmond staffer allegedly developed while the pair were caged inside the Queensland hub.

The hub, introduced so the competition could continue during the pandemic, has been blamed for putting pressure on families. 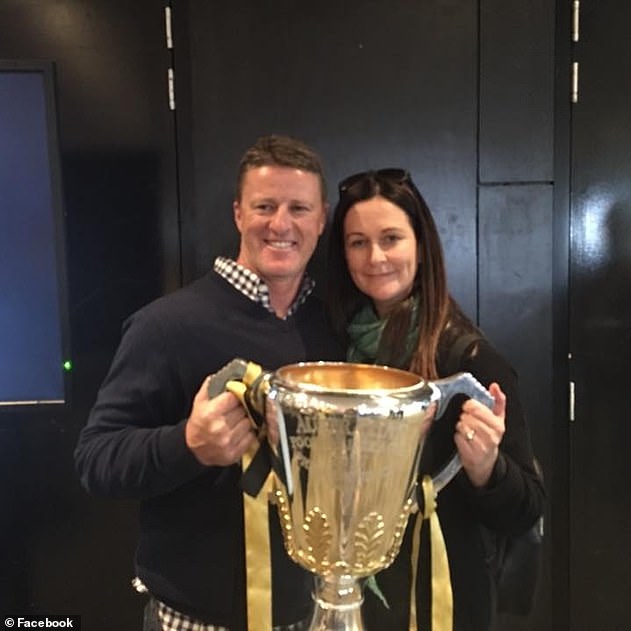 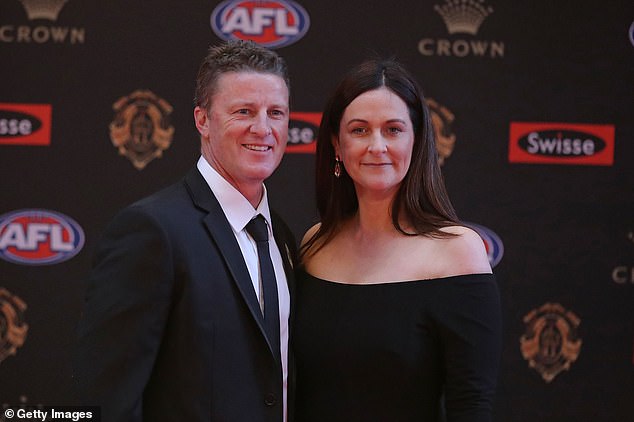 Damien Hardwick and his then wife Danielle Hardwick arrive ahead of the 2017 Brownlow Medal at Crown Entertainment Complex on September 25, 2017

At the beginning of 2020, before the bubble was brought in, Collingwood head coach Nathan Buckley and his wife Tania ended their 18-year romance.

The couple issued a statement via Tania’s Instagram page in December 2020, publicly announcing they separated 11 months ago.

They have since been co-parenting their two sons Ayce, 12, and Jett, 14, but kept the surprise breakup under wraps until today.

‘It has been a tough and challenging year for every family and for ours included,’ the statement read.

‘It is with the utmost of love and respect for each other and a true commitment to our sons, that we made a decision to separate in January.

‘We remain dedicated parents and in the interests of our boys, we ask for our family to be given the privacy that is needed. 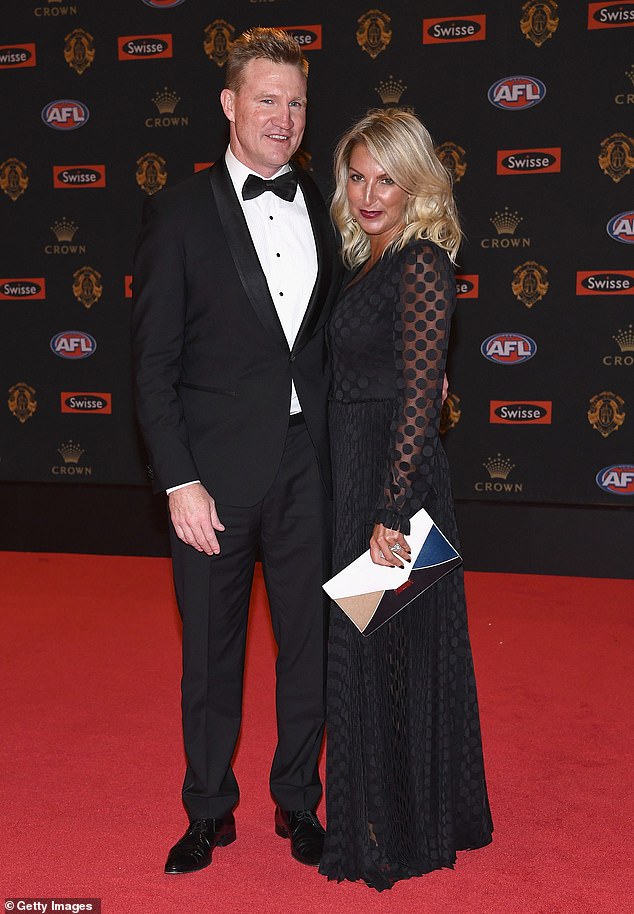 At the beginning of 2020, before the bubble was brought in, Collingwood head coach Nathan Buckley and his wife Tania ended their 18-year romance 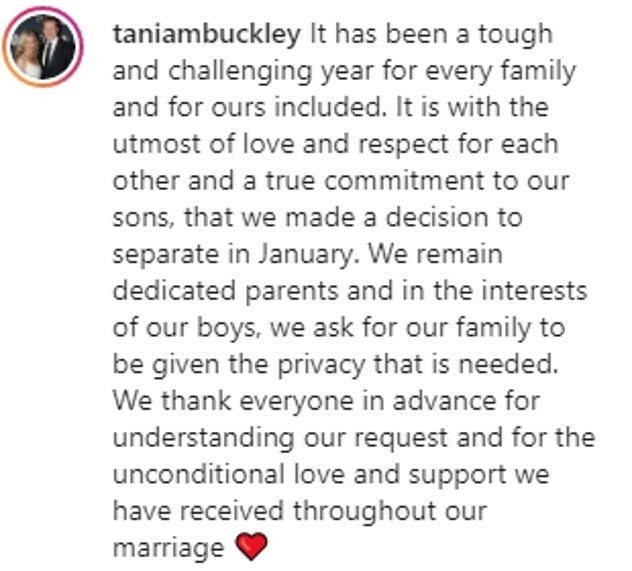 The AFL couple issued a statement via Tania’s Instagram page in December, publicly announcing they had actually split 11 months ago in January

‘We thank everyone in advance for understanding our request and for the unconditional love and support we have received throughout our marriage.’

After the Magpies lost the AFL Grand Final to Richmond in Queensland, Buckley moved out of the family home when he returned to Melbourne.

Buckley is reportedly now staying at an apartment in South Yarra, which is owned by his friend Paul Roberts – a TLA sports executive.

Geelong great Billy Brownless reportedly stayed at the same apartment amid his separation from ex-wife Nicky, also after 18 years of marriage, in 2015.

Buckley played 20 games for the Brisbane Bears before joining Collingwood in 1994.

He played 260 matches for the Magpies and booted 263 goals, becoming one of the club’s most decorated players. 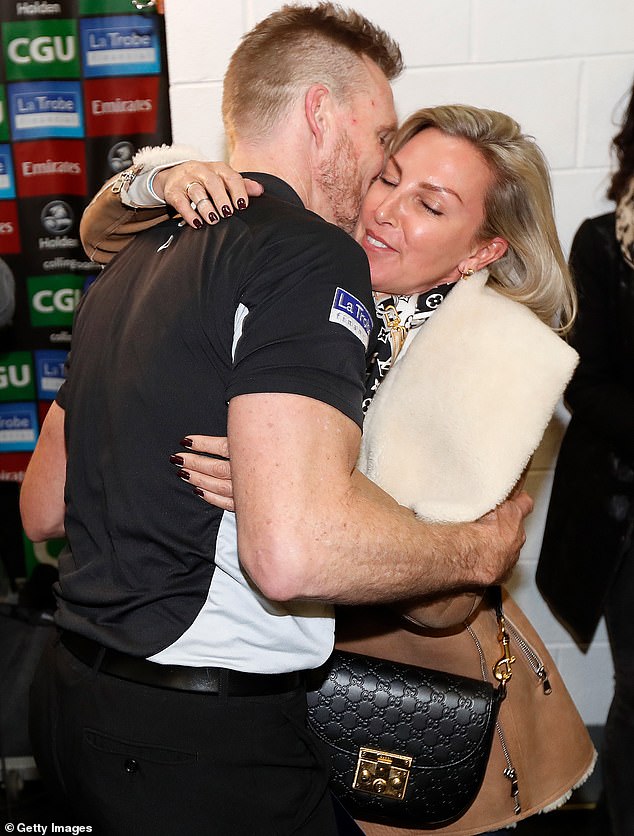 After the Magpies lost the AFL Grand Final to Richmond in Queensland, Buckley moved out of the family home when he returned to Melbourne (pictured with Tania)