Home cooks can make bakery-style biscuits in their own kitchens by following an amateur chef’s remarkably simple recipe for s’mores cookies.

Olivia Nash shared photos of the biscuits stuffed with marshmallows and white and dark chocolate in a cookery group on Facebook on Tuesday.

The baker from Dublin, Ireland, told members how to make their own by mixing 100 grams of brown sugar with 125 grams of unsalted butter, 225 grams of self-raising flour, 200 grams of chocolate, one egg and a tablespoon of vanilla extract.

Chocolate squares and marshmallow are then sandwiched between the dough which is baked for 10 minutes at 180 degrees Celsius.

Photos of the cookies have been reposted on social media pages worldwide where people are hailing them as ‘heavenly’ and marvelling at the simplicity of the recipe. 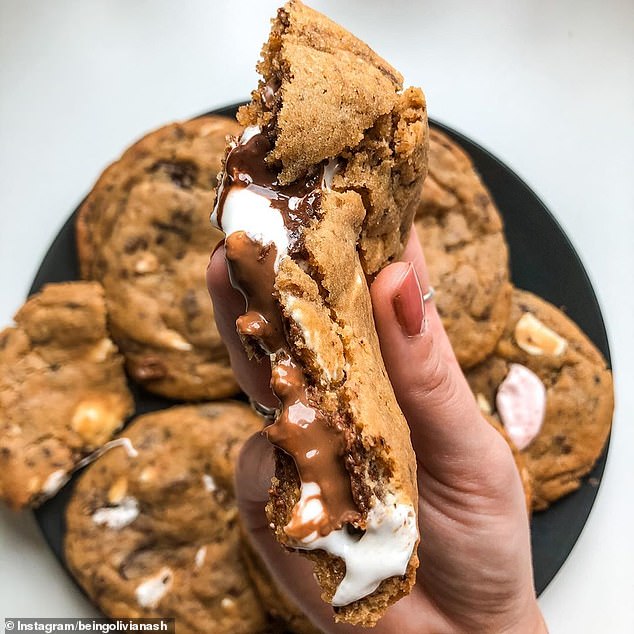 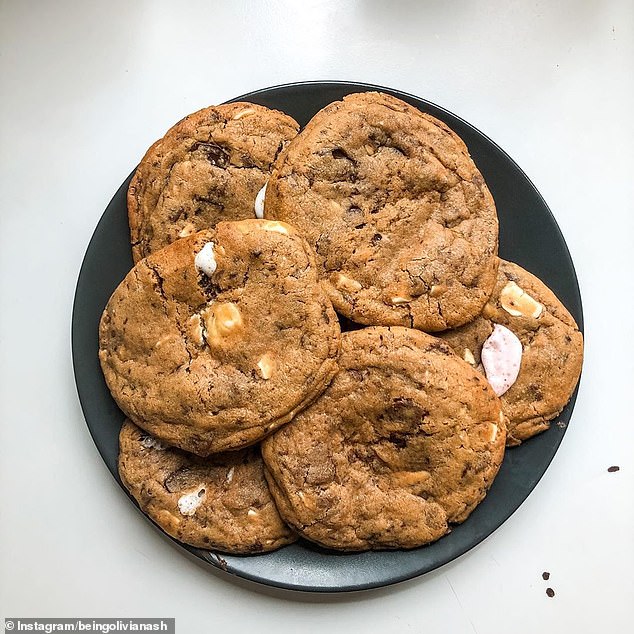 The cookies (pictured) are a new take on s’mores, a sweet treat popular in the US made from toasted marshmallow and a layer of chocolate sandwiched between two digestive biscuits

‘Are they as good as they look and as easy to bake as it reads?!’ one woman asked.

A second said she saved the recipe for the next time she can find marshmallows in the supermarket, while a third declared: ‘Oh my Jesus lord, I need these.’

Others said the cookies were the best thing posted online this year.

Ms Nash’s recipe is the latest dessert inspired by s’mores, a sweet treat popular in the US made from toasted marshmallow and a layer of chocolate sandwiched between two digestive biscuits, that’s caught attention on social media. 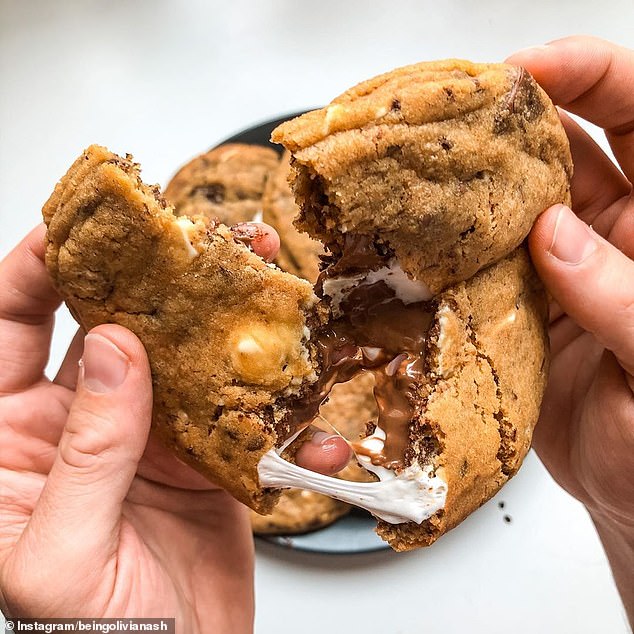 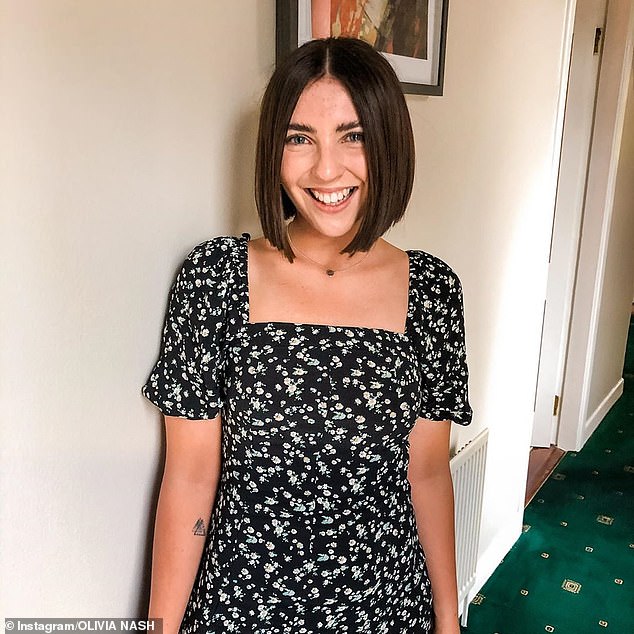 Dublin baker Olivia Nash (pictured), who created the recipe for the indulgent treats

1. Mix butter and sugar until smooth, then add eggs, vanilla and salt and beat again.

2. Add chocolate chips and flour, and mix until the batter forms a thick dough.

3. Flatten the dough and place a piece of chocolate on top, then a marshmallow and another piece of dough. Roll the stack into a ball.

4. Place the cookie balls into the fridge for 20 minutes to firm before baking.

‘Instagram famous’ baker Eloise Head in June shared a tutorial for s’mores pastry, made with ready-made shortcrust pastry ($5.50), 500g of milk chocolate ($9), 40 marshmallows ($7), two tablespoons of cinnamon and a teaspoon of sugar.

Her recipe has been by liked over 82,000 times with people branding it ‘stupidly delicious’ and their idea of ‘food heaven’.

To start, Ms Head unrolls the pastry out and folds the edges inwards, creating a lip to stop the toppings sliding off in the oven.

Then she ‘blind bakes’ the pastry at 180 degrees Celsius for 10 minutes, which involves pre-cooking a pastry or biscuit base alone without a filling to strengthen it and prevent breakages when batter is poured on top. 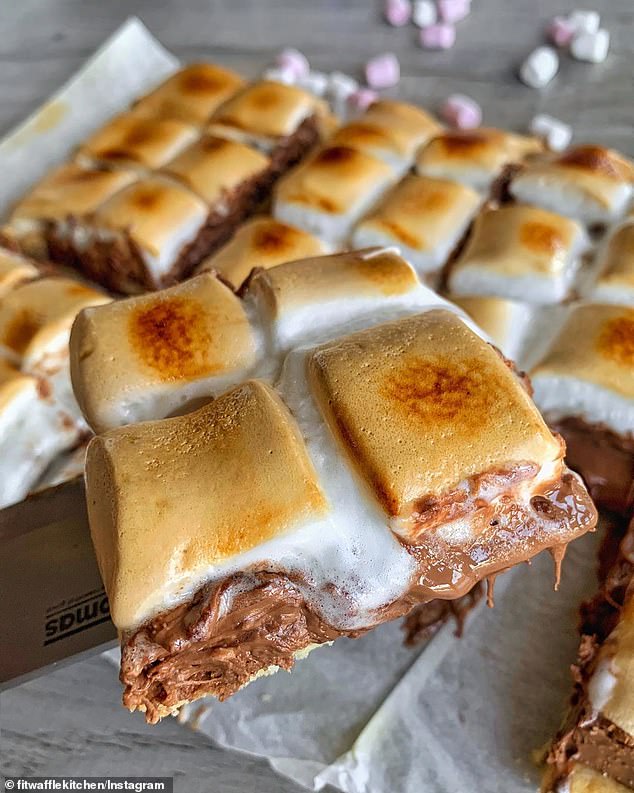 Next she sprinkles cinnamon and sugar over the top, spreading it evenly with the back of a spoon.

She lays blocks of chocolate flat on the pastry and a layer of marshmallows on top, taking care to cover every inch of the base.

Finally, she returns the finished pastry to the oven for another 10 minutes and removes once the marshmallow looks gooey and golden brown.

Followers have been raving about the quick and easy recipe, with one man calling Ms Head a ‘next level quarantine baker’.

The talented dessert maker built a following of 604,000 followers during lockdown when an extraordinary baking craze swept the world.

Ms Head told Daily Mail Australia in May that she was ‘very proud to help people keep occupied’ at a time when strict social distancing laws confined millions to their homes.

How to make s’mores pastry

1. Roll out ready-made shortcrust pastry and turn up the edges to form a lip.

3. Sprinkle cinnamon and sugar over the top, spreading with a spoon.

4. Lay blocks of chocolate on the pastry followed by rows of marshmallow.

5. Bake for another 10 minutes at 180 degrees Celsius until golden and gooey.

‘Run Mom!’ Sunbathing mother narrowly escapes being crushed when tree crashes down onto her lounger

July 17, 2020
Comments Off on ‘Run Mom!’ Sunbathing mother narrowly escapes being crushed when tree crashes down onto her lounger

July 24, 2020
Comments Off on Amber Heard ‘bled’ while Johnny Depp ‘urinated’ on furniture

July 10, 2020
Comments Off on Gold Coast driver who tested positive for meth claims his breath was contaminated by MALTESERS

July 8, 2020
Comments Off on Monica Lewinsky is dubbed ‘queen of the internet’ for playful reply to Sarah Cooper’s tweet

German Health Expert Karl Lauterbach: “The Authorities Should Focus Their Efforts on Super-Spreaders”

July 31, 2020
Comments Off on German Health Expert Karl Lauterbach: “The Authorities Should Focus Their Efforts on Super-Spreaders”

July 13, 2020
Comments Off on Huge swathes of Australia are set for days of wild weather as rain bomb drenches the country

July 8, 2020
Comments Off on Scott Morrison supports making returned travellers pay for their own quarantine

July 14, 2020
Comments Off on YouTube star Nicole Thea did not die in childbirth, reveal devastated family

July 13, 2020
Comments Off on Photographer recreates portraits of 15 historical figures with the help of their direct descendants

Indigenous Australian site was in use 22,000 years earlier than previously thought

July 14, 2020
Comments Off on Indigenous Australian site was in use 22,000 years earlier than previously thought
Victoria records worst coronavirus day on record
Bondi party girl begs judge to be allowed outside after 10pm so she can work while on bail