A teenage girl who was cleared of cancer twice has died after a two-year battle with a rare form of the disease.

Sienna Martucci’s heartbroken parents revealed back pain she suffered at the age of 13 was likely an undetected first sign of the deadly tumour.

The Perth teenager was diagnosed with Ewing’s sarcoma, a rare cancer that forms in and around bones, two weeks after her 16th birthday in 2019 when doctors found a tumour the size of a lung in her chest.

Over the next two years, Sienna had four ribs removed and underwent countless rounds of chemotherapy and radiotherapy before being given the all-clear twice, only for doctors to find worrying spots on her spine.

Then when her lung started to collapse on Easter Sunday this year, more tumours were found in her fragile body.

Sienna and her family were then given the heartbreaking news that the 18-year-old had only weeks to live. 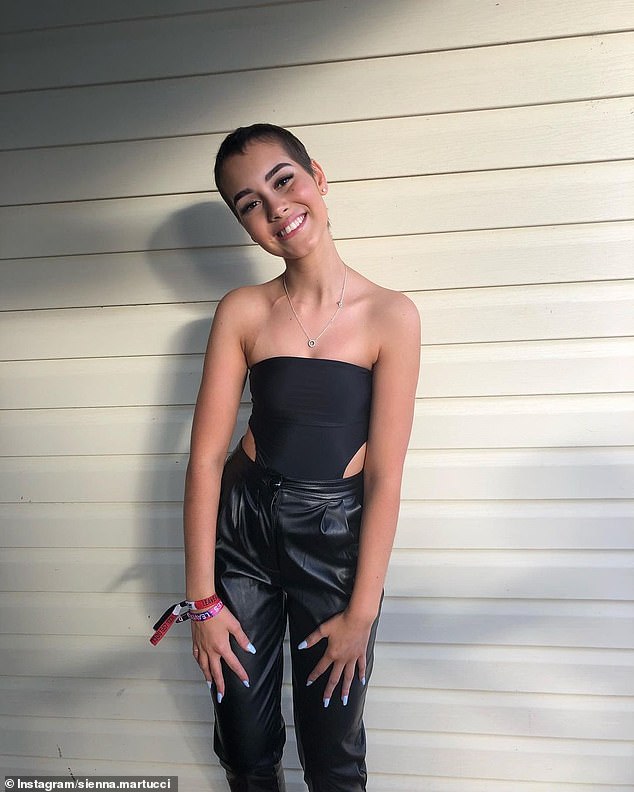 Pictured: Sienna Martucci, who died on April 21 after a two-year battle with a rare form of cancer 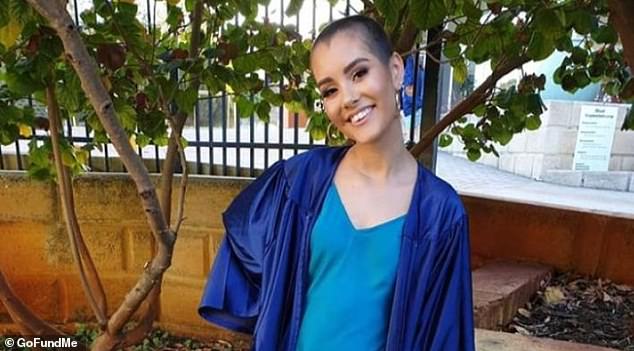 Pictured: Sienna Martucci at her Year 12 graduation in 2020. She also had a job and a drivers licence

‘We tried to get her home so that she could be comfortable,’ her father Mark Martucci told 7 News, adding that his daughter had been concerned that she would not be able to say goodbye to her dog, Pablo.

On April 19, the Make-A-Wish foundation bought her a ride in a Range Rover, which was her favourite car, and a Louis Vuitton bag with her initials embossed on the front.

Two days later, she had her mother Natalie and her father by her side when she said ‘I love you’ for the last time.

An hour later she was dead.

‘I was so happy for her because she got to do it the way she wanted to do it … with love around her,’ the father-of-four said.

While Sienna was diagnosed with cancer in 2019, her parents believe she was suffering with the illness for up to three years before it was detected. 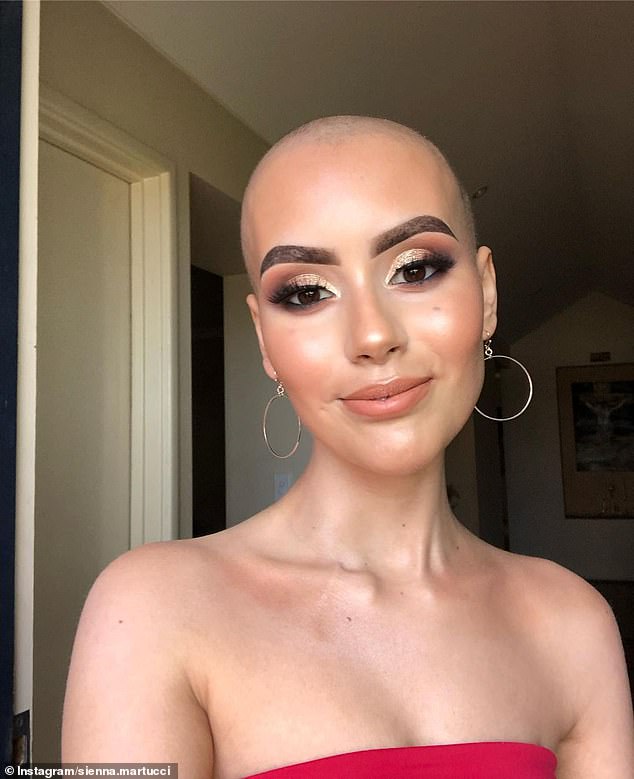 As an energetic teenager who loved basketball and dancing, she often complained about pain in her back – a likely symptom that was initially attributed to growing pains.

WHAT IS EWING’S SARCOMA?

Ewing’s Sarcoma is a cancer of the bone, which usually affects the ribs, pelvis and spine. In rare cases, it also occurs in the soft tissues.

The condition affects less than 30 children a year in the UK.

Around 225 young people are diagnosed annually in the US.

Ewing’s Sarcoma’s cause is unclear but may relate to the timing of rapid bone growth.

The most common symptom is pain, which is usually worse at night.

Treatment depends on the size and position of the tumor but usually involves chemotherapy, surgery and radiotherapy.

Amputation may be unavoidable if the cancer affects the surrounding blood vessels and nerves.

However, this may be avoidable by replacing the bone with a prosthesis or a bone from elsewhere in the body.

‘For two or three years, we were taking her to chiropractors and I’d massage her … I was massaging a tumour and I never realised it,’ Mr Martucci told the network.

Having watched countless children die in hospital while visiting their daughter, the Martucci family are urging other parents to pay close attention to their children’s health.

After her first cancer diagnosis at the age of 16 in 2019, the teenager underwent six rounds of chemotherapy to shrink the enormous tumour, had four ribs removed and radiation therapy.

She was given the all-clear in November 2019, but a checkup in May last year showed a spot on her spine.

The spot was treated with radiotherapy and she was cleared of cancer again in November 2020.

But it wasn’t until a routine checkup in May this year revealed new spots on her lungs, spine and near her spleen that her health started to decline.

With nothing left to lose, Sienna was involved in an experimental chemotherapy trial where she took 20 tablets a day for two months.

On April 4, Mrs Martucci took her daughter to hospital for a CT because she was having trouble breathing.

The scan revealed that more tumours had grown in her body, including one between her right lung and oesophagus that measures 7cm, and fluid around her right lung because it was collapsing.

Despite her death less than three weeks later, her family said the young woman lived life to the fullest.

She graduated high school in 2020, had a drivers licence and kept a casual job when she was healthy enough to do so.

Mr Martucci said his ‘amazing’ daughter likely inspired others to make the most of life because she always did exactly what she wanted to do with a ‘big smile on her face’.

A Go Fund Me campaign was set up to help pay for Sienna’s funeral service, and all remaining funds will be donated to cancer organisations Sock it to Sarcoma and the Australia and New Zealand Sarcoma Association.

‘Sienna’s story is truly inspiring and she is admired by so many for her strength, bravery and resilience over the past few years,’ the fundraiser read. 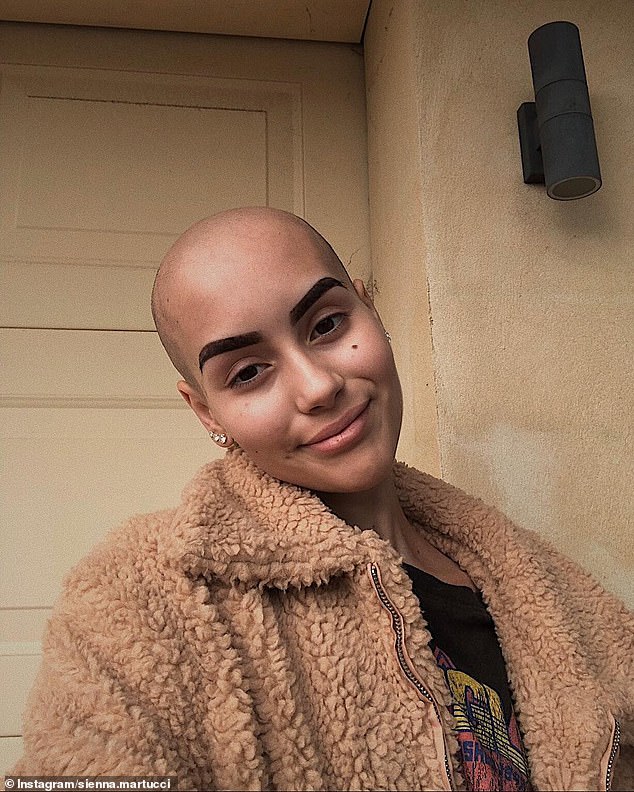 ‘She was truly a light in the lives of each person she met and reminds us all to cherish everyday and every moment we spend with our loved ones.’

The teenager has been remembered by friends and family who wrote heartbreaking tributes on social media.

‘Why must life be so damn cruel,’ one woman asked.

‘Rest easy beautiful girl. Sienna Martucci you were one of the strongest young ladies I have ever had the privilege of knowing and I’ve never seen someone make no hair look so bloody stunning.’

Another tagged wrote a message to Mrs Martucci: ‘Our family is heartbroken to hear about beautiful Sienna. We wish you and your family unending love, support and light in this difficult chapter of your lives.’