Orlando Police have defended the actions of three officers who tried to enter a home without a warrant before arresting a man and kneeling on his neck, after a traffic stop over a seatbelt violation descended into violence.

Body camera footage of the July 2019 incident shows officers John Earle, William Jimenez and Luke Austin’s confrontation with a group of residents outside a home in the city’s Parramore neighborhood.

The officers had pulled over Janet Feliciano as she approached her driveway outside the house after a man sitting in her passenger seat was not wearing a seatbelt. 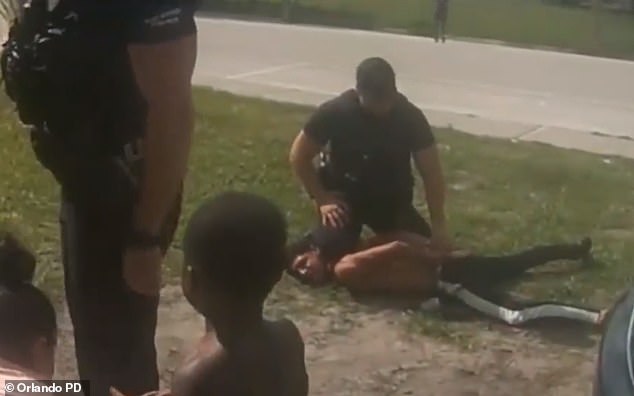 Body cam footage showed the moment a traffic stop over a seatbelt violation descended into violence in Orlando, last July 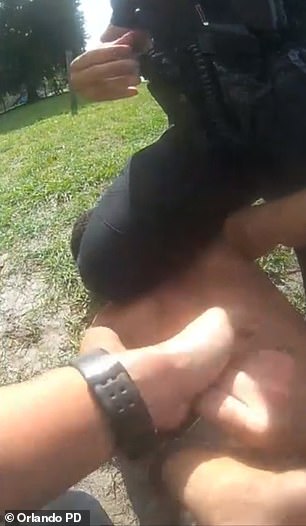 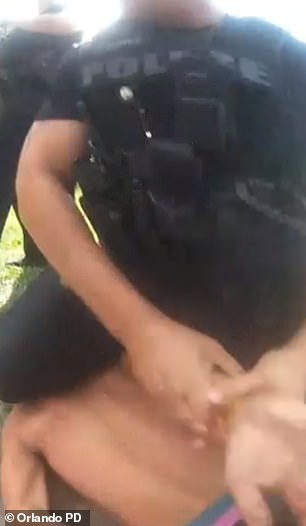 The cops said the man, who was not identified, allegedly ignored officers during the confrontation and proceeded to go inside the home after he was stopped, WFTV 9 reported.

Officer Jimenez then walked up to the home and asked Feliciano to tell the man to come outside, threatening to arrest him.

Feliciano told the news station her son then opened the door and one of the officers began to make his way into the home, and was immediately blocked by her adult children.

It was then that the incident escalated into chaos, she said, as officers began pulling the residents from the house and placing them in handcuffs.

Video footage showed one of the officers kneeling on Feliciano’s son’s neck as they struggled to arrest him.

‘Can you get off my neck? I can’t breathe! I got asthma,’ he tells cops.

The man, who was not named, said he was trying to protect his pregnant sister after police grabbed her, tossed her on the ground and arrested her. 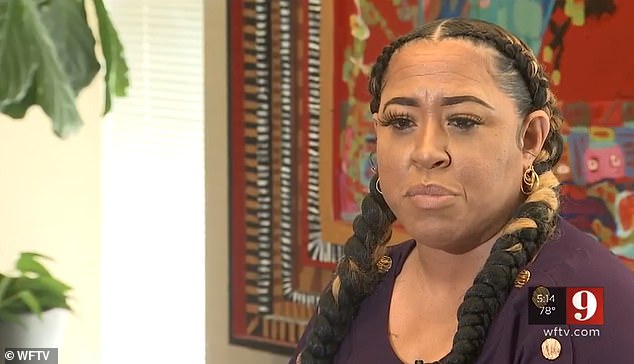 ‘All I see is (them) putting their knee on my son’s neck, body. And I’m telling them, ‘My son, he can’t breathe’,’  Feliciano told the news station.

It was later revealed police had been acting on a probable cause after they allegedly smelled marijuana coming from the inside of the home.

However, Feliciano claimed at no point did the officers say why they were arresting them.

According to the department’s use-of-force policy, which was obtained by the news station, officers are to avoid using force or pressure in the neck area.

Police Chief Orlando Rolon, however, defended the officers’ actions saying the man was able to ‘communicate the entire time’ he was restrained.

Rolon also insisted the cops were not trying to enter the home but were attempting to ‘secure’ it after smelling the drug.

‘The officers were not trying to get into the home,’ Rolon said. 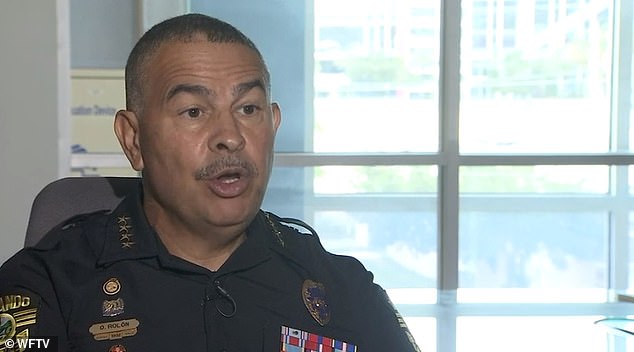 Police Chief Orlando Rolon, however, defended the officers’ actions saying the man was able to ‘communicate the entire time’ he was restrained

‘They were trying to secure the home. Unfortunately when you have a situation where, say, it’s suspected potential that there’s a drug in the home, you have to secure the premises, meaning you have to control what’s going on,’ he said.

The family’s lawyer Howard Mark, however, said the incident was a violation of their Fourth Amendment rights.

‘It’s a civil infraction, and from there, you wind up going into people’s home, pulling people out, throwing people on the ground, putting knees on people’s neck. There is nothing that the officers did correctly here, and I cannot imagine that the Orlando Police Department would condone this type of activity,’ he said.

Feliciano’s children arrested for battery on a law enforcement officer and resisting arrest, but the charges were later dropped.

Prosecutors noted the officers were ‘overzealous’ in their actions and did not have legal ground to try to enter the home.

The passenger, meanwhile, was never cited for not wearing a seat belt.

August 7, 2020
Comments Off on Wedding guests are sent flying by massive explosion which tore through Beirut during the ceremony

July 25, 2020
Comments Off on Prince Andrew takes a spin after daughter Beatrice’s wedding – as FBI continues call to quiz him

August 11, 2020
Comments Off on ‘Hammer-wielding’ man ‘smashes woman’s car window before dragging her out’

July 7, 2020
Comments Off on Serial killer named as murderer of 95-year-old grandmother inside a nursing home on New Year’s Eve

July 28, 2020
Comments Off on Western Australian yet to claim $2million lotto draw prize in TattsLotto draw 4071

July 14, 2020
Comments Off on Byron Bay search: Hunt for missing Thea Liddle who vanished in NSW eight months ago

July 31, 2020
Comments Off on Addicts flock to Midtown Manhattan to deal and use drugs in public as cops turn blind eye

July 15, 2020
Comments Off on Mum wows the internet with her ‘brilliant’ trick for reaching hard to reach areas while vacuuming

August 4, 2020
Comments Off on Prime Minister Scott Morrison reveals his culinary skills as he shares pictures of delicious curries

July 30, 2020
Comments Off on COVID-19 hotspot map shows how Sydney’s outbreak is spreading as experts say NSW is in a ‘bad place’

‘What does simp mean?’ Google reveals the top questions Aussies ask since the start of 2020

July 23, 2020
Comments Off on ‘What does simp mean?’ Google reveals the top questions Aussies ask since the start of 2020

August 10, 2020
Comments Off on How footy star became a gambling addict before trying to import a TONNE of cocaine into Australia
Mystery surrounds the ‘suspicious’ death of a Chinese student, 19, found in a Sydney unit
Queensland increases border restrictions on Victorians