Boris Johnson today warned the UK is not yet ‘out of the woods’ of the coronavirus crisis after official statistics showed England had the highest levels of excess mortality in Europe in the first half of 2020.

The Prime Minister said ‘we mourn every loss of life’ as he argued ‘we really owe it to them to continue our work in driving the virus down’.

He said now is not the time to ‘delude ourselves’ that the pandemic ‘is all over’ as he told the nation: ‘Don’t lose focus, don’t lose discipline.’

Mr Johnson’s comments came after Health Secretary Matt Hancock denied stoking up Covid-19 panic and hysteria after he warned a second wave was ‘starting to roll across Europe’.

Today BBC broadcaster Nick Robinson repeatedly asked Mr Hancock if he was being hysterical about rising cases in Europe and the UK because infection rates are nowhere near the lockdown peak and are likely to be a symptom of society returning to a new normal.

Mr Robinson also asked if he was overreacting because of a fear of repeating mistakes Number 10 made at the start of the outbreak, such as not quarantining travellers from abroad.

‘We are absolutely determined to protect this country and it saddens me we are seeing these rises elsewhere but I will be vigilant and we will move fast if we need to because that is what the virus requires and the virus moves fast and so must we.’ 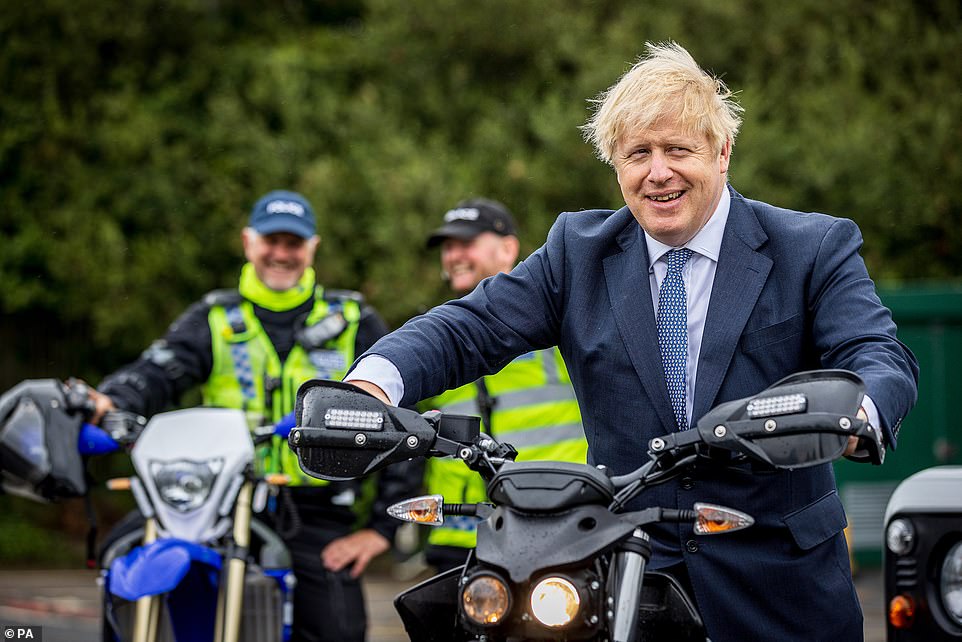 Boris Johnson, pictured on a visit to North Yorkshire today, said the UK must not ‘delude ourselves’ that the coronavirus crisis is over 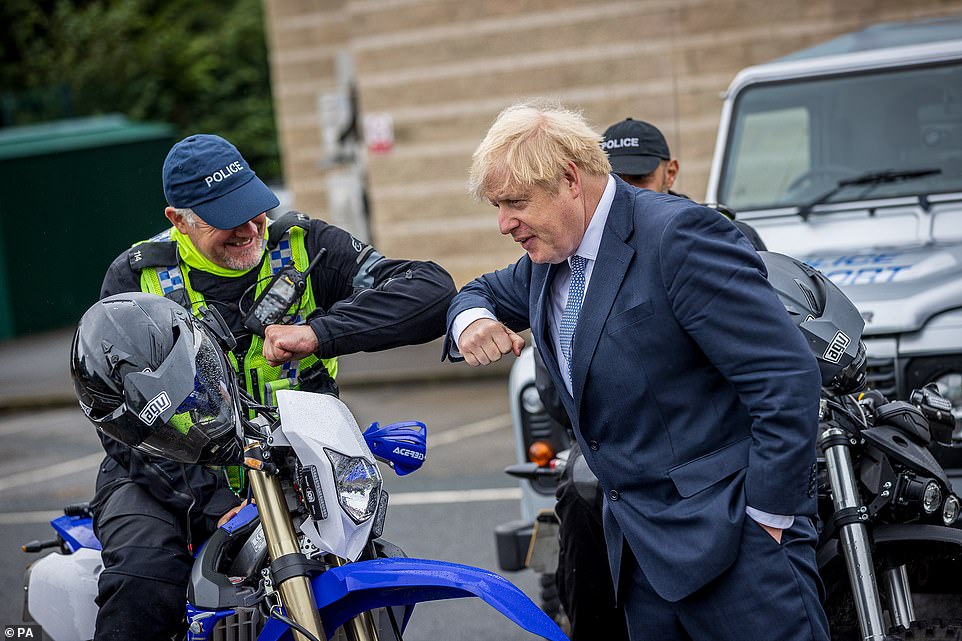 Ministers today confirmed people who now test positive for coronavirus or have tell-tale symptoms will be told to stay at home for ten days, in line with World Health Organization guidance — up from the current seven-day self-isolation period because ‘evidence has strengthened’. 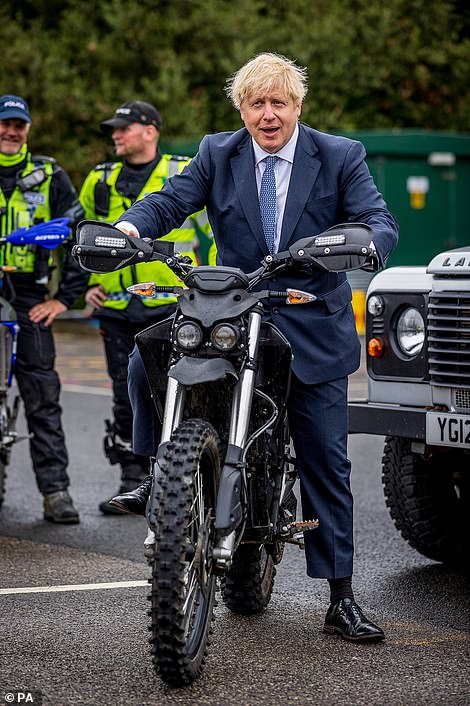 Labour MP Chris Bryant today called for ministers to calm down, saying ‘we need a stiletto not a sledgehammer’ to tackle clusters of coronavirus. He said: ‘It makes me so angry the government are so loose with their language.

‘There isn’t a second wave rolling out across Europe. There are worrying signs of individual spikes of increased infection in some areas.’

Mr Hancock also hinted more European countries could be added to the UK’s quarantine list to stop Covid-19 getting a stranglehold in Britain again, after ministers were accused of being too slow to react early on in the pandemic.

He told Sky News: ‘I am worried about a second wave. You can see a second wave starting to roll across Europe. We have to do everything we can to prevent it reaching these shores.

‘It’s not just Spain, there are other countries too where the number of cases is rising, and we are absolutely determined to do all we can to keep this country safe.’

He told the BBC later: ‘There is a real danger of an increase in cases in the UK but we will move fast if needed’.

Data released by the Office for National Statistics showed England experienced the longest continuous period of excess deaths, as well as the highest levels, in a comparison of 23 European nations.

It is the first time the ONS has compared mortality rates in different countries to measure the impact of the coronavirus pandemic. 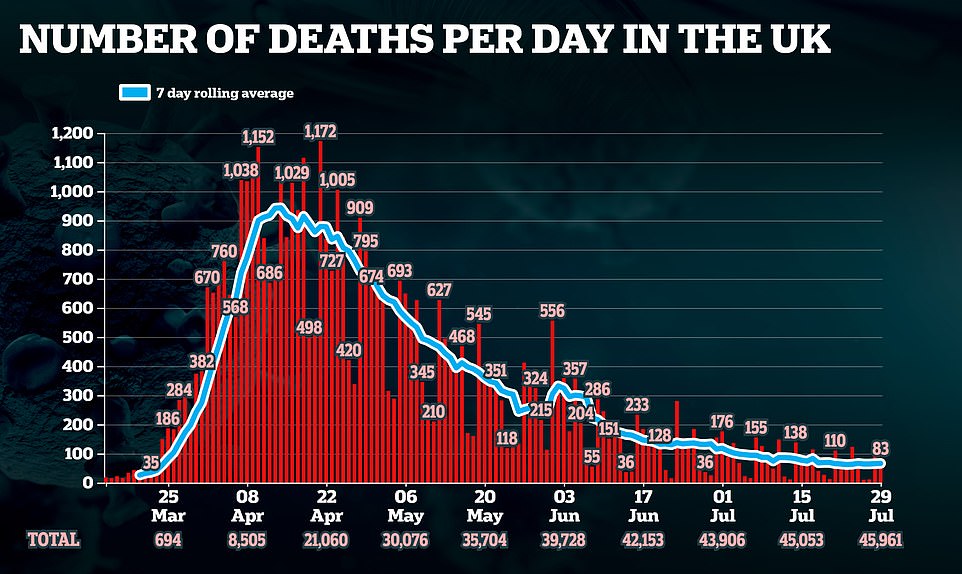 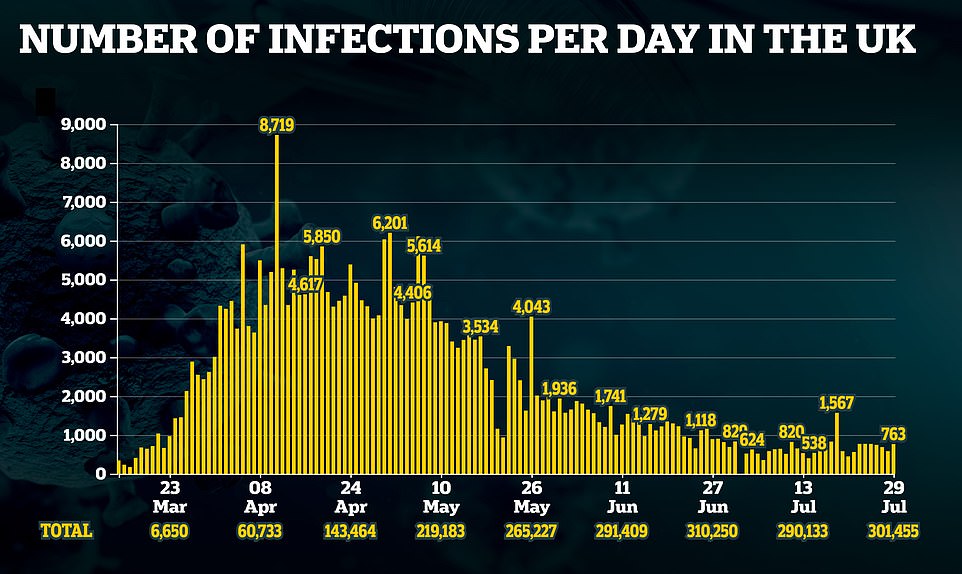 England still had the highest cumulative excess deaths rate two weeks later, by the week ending June 12, though at this point there was only data available on 17 other countries to compare it with.

Responding to the figures, Mr Johnson said the nation ‘has had a massive success’ in reducing the number of deaths.

Asked during a visit to North Yorkshire if he was ashamed over the ONS analysis, he said: ‘We mourn every loss of life that we’ve had throughout the coronavirus epidemic.

‘What I would say to them (families of the deceased) is that we really owe it to them to continue our work in driving the virus down.

‘Clearly this country has had a massive success now in reducing the numbers of those tragic deaths.

‘We’ve got it at the moment under some measure of control. The numbers of deaths are well, well down.

‘But I have to tell you that we’re looking at a resurgence of the virus in some other European countries. You can see what’s been happening in the United States.’

Mr Johnson urged people to continue to stick to social distancing and hygiene rules in order to stop the spread of the disease.

He said: ‘Broadly speaking, the only way to control coronavirus is if everybody collectively obeys the social distancing rules and works together to drive the virus down.

‘So that’s why I make this point that I do – we’ve done a huge amount. Together we’ve really reduced the incidence of the virus and we’ve got the number of deaths down.

‘But it can come up again, and we’ve seen what is happening in other European countries, so what I’m saying to people is don’t lose focus, don’t lose discipline, continue to observe those guidelines and if you have symptoms, get a test.’ 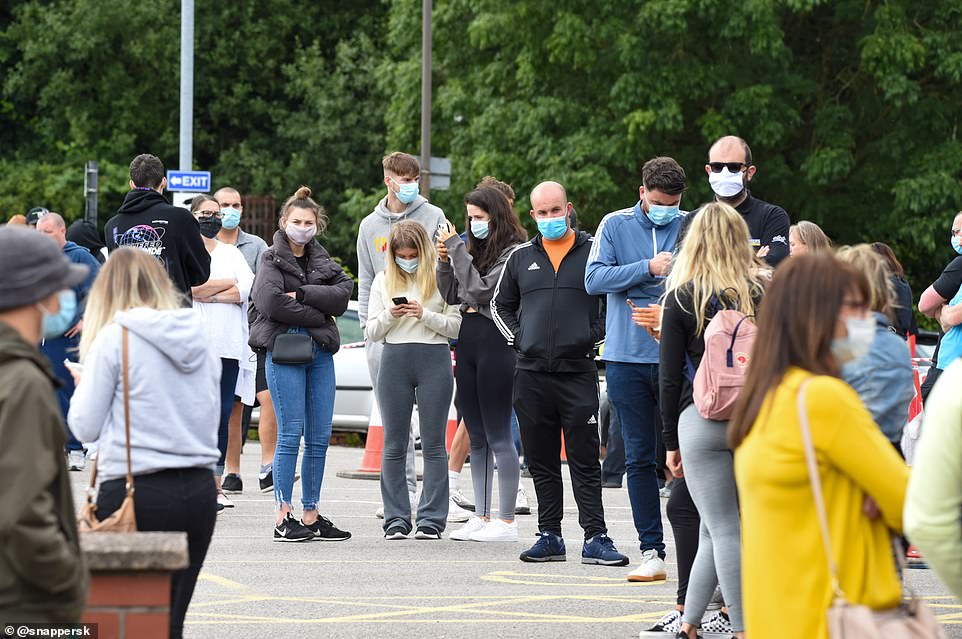 Patients who are confirmed to have Covid could be told to stay at home for 14 days under a change to the rules. Pictured: People queue up at a walk-in Covid-19 testing centre at Crown Street car park in Stone, Staffordshire after nearby Crown and Anchor pub saw outbreak of the disease

The PM said it would be a mistake for the UK to think that the coronavirus crisis is finished.

‘It’s absolutely vital as a country that we continue to keep our focus and our discipline and that we don’t delude ourselves that somehow we’re out of the woods or that this is all over, because it isn’t all over,’ he said.

The rolling average of daily cases in the UK has been rising since earlier this month, while there have been fresh restrictions in Oldham, Greater Manchester, and localised outbreaks in Stone, Staffordshire, and Wrexham, north Wales.

Figures yesterday revealed Oldham had overtaken Leicester to have the England. Blackburn with Darwen is still the worst-hit authority in the country.

Leicester’s rate currently stands at 57.7 — up slightly on Wednesday’s figure but down 15 per cent in a week.

Leicester, the first place in the UK to have a mini-lockdown imposed, will have its shutdown reviewed today — two days earlier than expected.

Fears of a resurgence of infections come as scientists found that the coronavirus R rate is above the dreaded level of one in the South West and South East of England.

Government scientists say the UK’s reproduction number — the average number of people each Covid-19 patient infects — is still between 0.7 and 0.9.

But a team from Cambridge University estimate it could be above one in two regions, and on the brink of passing the level in every part of the country except the Midlands.

It is vital this number stays below one, otherwise the coronavirus outbreak could start to rapidly spiral again as people infect others around them at a faster rate.

Academics analyse figures on deaths and cases, as well as data on how many people have antibodies and social interactions, to make their predictions that feed into SAGE.

According to their model, the R rate is the highest in the South West (1.04) — home to the stay-cation hotspots of Cornwall, Devon and Dorset. It is also estimated to be above one in the South East (1.02).

Three other regions — the North West, East and London — have seen a rise in the reproduction rate, which experts say is not an accurate way to measure an outbreak when cases are low.

Scientists blamed the the lifting of lockdown measures, the Daily Telegraph reports. Infectious disease academics warned a spike would be inevitable.

Despite the warnings, Boris Johnson was urged not to panic over fears of a summer surge.

August 4, 2020
Comments Off on Social distancing may be GOOD for the economy as it makes people more comfortable to go out

July 31, 2020
Comments Off on Alessandra Ambrosio shows off her svelte figure in athleisure as she joins her sister for lunch

July 31, 2020
Comments Off on Amazon, Apple, Facebook and Google add $250billion to their combined market value

August 5, 2020
Comments Off on Victoria records 725 cases of coronavirus

August 5, 2020
Comments Off on Two black bears are killed and another two injured after being hit by cars in Yosemite National Park

‘This thing’s going away:’ Donald Trump repeats his call to reopen schools

August 5, 2020
Comments Off on ‘This thing’s going away:’ Donald Trump repeats his call to reopen schools

The Project unloads on Nick Kyrgios for ‘brat-like’ refusal to play the U.S. Open over coronavirus

August 2, 2020
Comments Off on The Project unloads on Nick Kyrgios for ‘brat-like’ refusal to play the U.S. Open over coronavirus

August 2, 2020
Comments Off on TOWIE’s Chloe Sims puts on an eye-popping display in plunging floral gown at restaurant launch

PETER HITCHENS: The Government’National Panic Service is being used to keep us in perpetual alarm

August 2, 2020
Comments Off on PETER HITCHENS: The Government’National Panic Service is being used to keep us in perpetual alarm