A man who doused his teenage girlfriend in fuel and set her alight could be out of jail in as little as six months.

Brae Taylor Lewis was originally sentenced to 11 years in jail in 2018 after he was convicted of maiming his then-girlfriend by setting her on fire on May 27, 2016.

But that sentence was slashed to nine-and-a-half years on appeal in the Brisbane District Court on Thursday.

When factoring in time already served in custody, the now 22-year-old will be eligible for parole in just six months.

Judge Michael Burnett acknowledged the ‘horrendous and disgraceful’ nature of his offending but said the new sentence needed to reflect his youthfulness at the time of the crime, remorse and rehabilitation efforts while behind bars.

The 22-year-old was set to face a retrial this week but entered a last minute guilty plea to one count of malicious act with intent in the Brisbane District Court.

Lewis’ victim’s mother had begged the judge to keep him locked up for as long as possible on Wednesday, arguing that Judge Burnett was ‘the only person who could keep her daughter safe’.

The couple, who were both 17 at the time of the incident and living together, had a volatile relationship marked by frequent verbal abuse and ‘regular outbursts of aggression’.

But in the lead up to the 2016 attack, Lewis had grown increasingly aggressive and threatened to set his girlfriend alight on at least one other occasion.

She suffered deep dermal burns to 21 per cent of her body and has permanent scars across her arms, chest, abdomen, back and thighs following the Marsden attack, south of Brisbane.

In 2019, 20-year-old Lewis argued he was simply trying to scare her and appealed his conviction of committing a malicious act intended to cause grievous bodily harm.

The woman and her mother both read victim impact statements to the court on Wednesday. 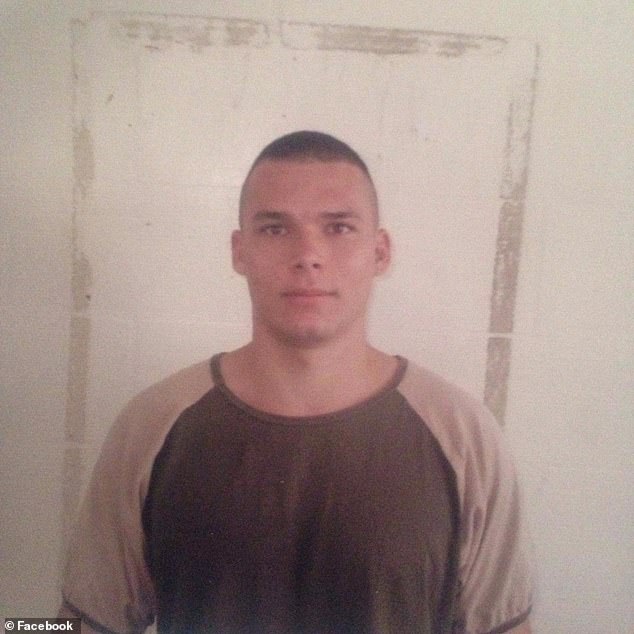 Brae Taylor Lewis was sentenced to 11 years in jail in 2018 after he was convicted of maiming his then-girlfriend by setting her on fire on May 27, 2016 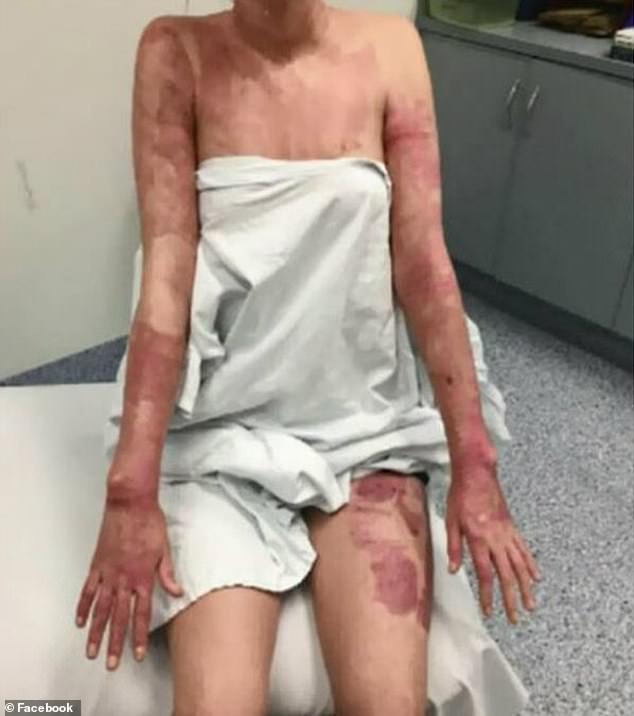 His girlfriend suffered deep dermal burns to 21 per cent of her body and has permanent scars across her arms, chest, abdomen, back and thighs following the attack

The mother told the court how she feared for her daughter’s safety during the relationship and begged her to leave him.

‘His plea is for freedom, and mine is for him to stay incarcerated,’ she tearfully told the judge.

‘I feel he is a genuine danger to society, to other unsuspecting women and again to my daughter… Your Honour, you are the only person who can protect my daughter.’

The mother said she felt Lewis’ last minute guilty plea was a last ditch bid for freedom rather than a reflection of his rehabilitation since his incarceration in 2016, and described it as a final insult to her daughter.

Prosecutors explained that the mother was made aware of a Facebook post made to Lewis’ account just days ago which read: ‘Plead guilty and get out in a few weeks… Who wouldn’t? F*ck yeah.’

Lewis’ barrister Andrew Hoare denied his client made the post, despite comments from both his mother and grandmother which ‘suggested they were under the impression the statement had come from him’.

The victim, who is now 22, told the court she still requires therapy for the ‘brutal attack’ and feels like she is ‘living a life sentence’. 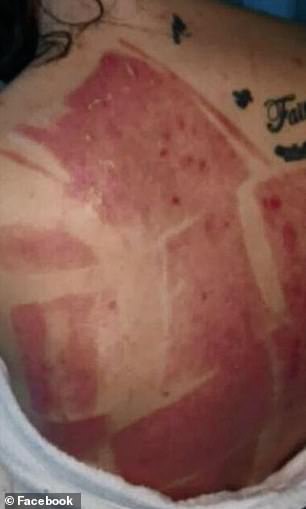 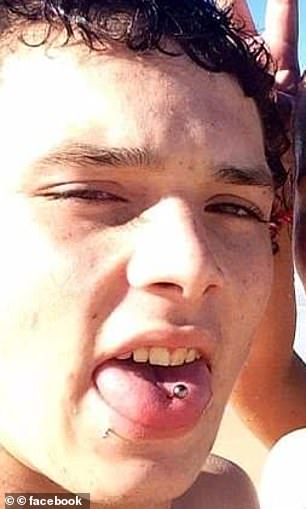 The woman, who is now 22, told the court she still requires therapy for the ‘brutal attack’ and feels like she is ‘living a life sentence’ (burns left, boyfriend right)

‘I can’t put petrol in my car, I can’t light a gas stove top, I struggle to do everyday things and I constantly feel self conscious about my scars and appearance.’

She struggles to trust people and still has nightmares about the ordeal.

‘I woke up from that coma not knowing where I was and with tubes coming out of me… And then I found out what happened and was heartbroken to know the one that I loved did that to me.’

Mr Hoare acknowledged the severe consequences for his client’s actions while also arguing for the sentence to be reduced.

‘These acts occurred four years and seven months ago, when he was a child,’ he said. ‘He’s been in custody for more than a quarter of his life.’

The court previously heard that the victim spent two days in an induced coma following the attack, and the burns were so severe they’d penetrated her skin.

She admitted that they would ‘hit each other, kick, choke and throw things at each other,’ but said that ‘at certain points, he would take it that step further’.

In the months leading up to the attack, Lewis had already doused his then-girlfriend in petrol and threatened to set her alight. 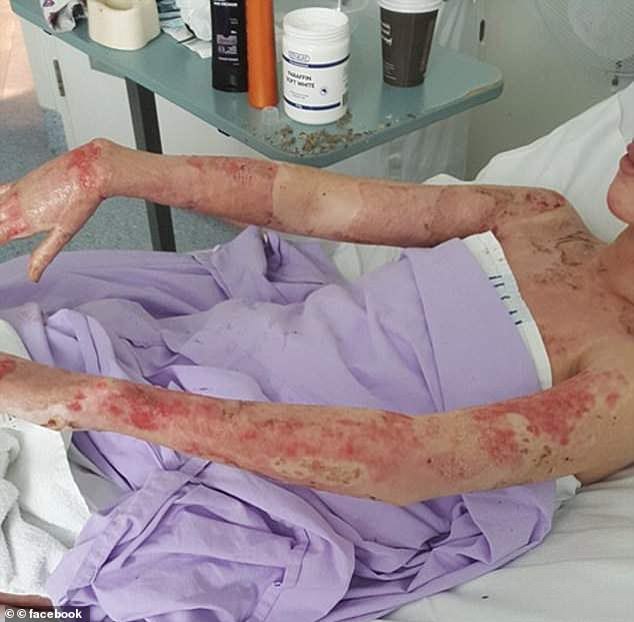 ‘I thought, yeah, he may have thrown it on me to scare me, but I never believed that he was ever going to go that extra step and actually set me on fire,’ she told the court at his initial sentencing.

A week prior to the incident, he threw a screwdriver at her and it wound up lodged in her hip. She did not seek medical treatment over the incident and still has a scar.

But his pro bono barrister Andrew Hoare, in asking for an appeal, maintained that Lewis did not intend to set her alight, and instead was trying to scare her.

Mr Hoare said Lewis lit the fumes in the air and did not directly light her.

He also argued that Lewis showed immediate remorse by attempting to put out the flames.

On that matter, the victim said: ‘After the fire was off me he started crying and screaming that he was sorry and that he would never intentionally mean to hurt me.’

After neighbours arrived at the house and called emergency services, Lewis fled the scene. He called his family and asked whether he would be in trouble, but refused to offer his location. Police found him at an undisclosed address the next day.

Two witnesses to the incident told the court they were under the influence of drugs at the time.

Lewis was a daily user at the time of the incident and had been addicted to amphetamines since he was 15 years old.

The court heard he had a difficult upbringing, was exposed to significant violence and sexually abused by an older associate. His lawyer also said his drug use increased after the death of his younger brother by suicide.

‘His conduct was that of an addict with trauma that was unresolved and untreated, which culminated in an act that led to serious consequences to the young woman. 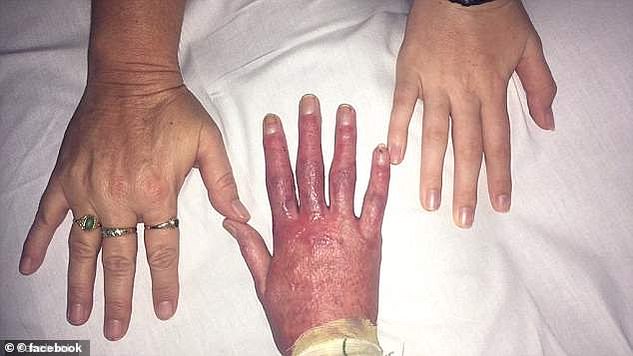 The court previously heard that the victim spent two days in an induced coma following the attack, and the burns were so severe they’d penetrated her skin

The events leading up to Lewis setting his girlfriend alight

The victim and her boyfriend, Brae Taylor Lewis, were in a relationship marked by regular verbal arguments which occasionally led to physical violence.

On the day of the attack, they had consumed methamphetamine along with two of their friends, who were witness to the incident.

Later in the day, a fight broke out between the couple when the woman asked to use the mobile phone that they shared to check in with Centrelink.

Lewis threw petrol on her and threatened to set her alight. It was the second time he’d made the same threat in months, but said this time he’d ‘really do it’.

She later told the court she did not take the threat seriously and simply asked for the phone again. She explained that she had pushed Lewis and that he later lifted the lighter toward her.

The fumes caught alight and quickly engulfed her clothing and upper body. Lewis immediately approached the then-17-year-old and tried to put of the flames, but she pulled away from him.

Neighbours rushed to the scene and emergency services were called. She was placed in a shower with cold water running over her at the request of paramedics.

A witness, who admitted to being under the influence of drugs, said the woman’s skin was peeling off her arms and chest.

A neighbour then threatened Lewis, who fled and refused to reveal his location until police located him the next day.

Lewis has remained in custody since that arrest, and has been charged with asking his new girlfriend to sneak drugs into the jail.

He was sentenced to 11 years in custody but was granted an appeal on the basis that he did not intend to cause grievous bodily harm.

On Wednesday, he changed his plea to guilty.

But the victim’s mother reported that she believed he was not remorseful and the guilty plea was instead tactical to get out of prison earlier.

The prosecution cited a Facebook post made under Lewis’ name days prior which read: ‘Plead guilty and get out in a few weeks… Who wouldn’t? F*ck yeah.’