Broome helicopter crash: Parents of Amber, 12, who died in the accident, break their silence

Broome helicopter crash: Parents of Amber, 12, who died in the accident, break their silence

The grieving parents of a 12-year-old girl who was killed in a horror helicopter crash have spoken out for the first time since her death.

School valedictorian Amber Jess was one of two people killed in the crash in Bilingurr, north of Broome in Western Australia, just after 2.30pm on Saturday.

His daughter and Amber’s friend Mia Thomas, 12, as well as family friend Maddison Down, 24, were both injured and remain in serious but stable conditions at hospital.

Amber’s parents Fiona and Clint, who wished to withhold their surnames, paid tribute to their ‘irreplaceable daughter’ and ‘beautiful friends’ on Thursday. 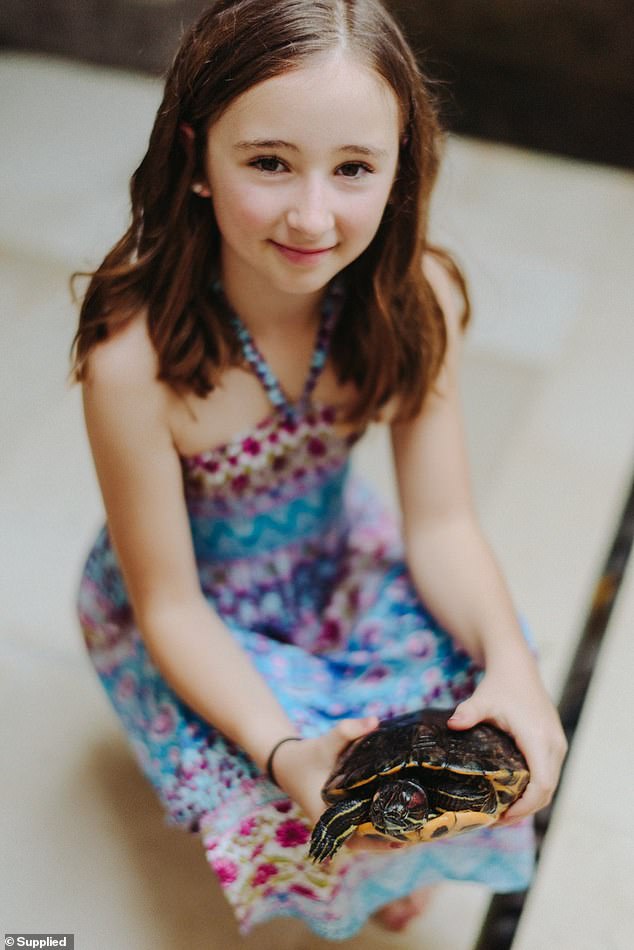 Amber holds a turtle at her cousin Emily’s wedding in 2018 (pictured). Emily said Amber ‘challenged me to live a better life’ because she lived life to the fullest and was very caring 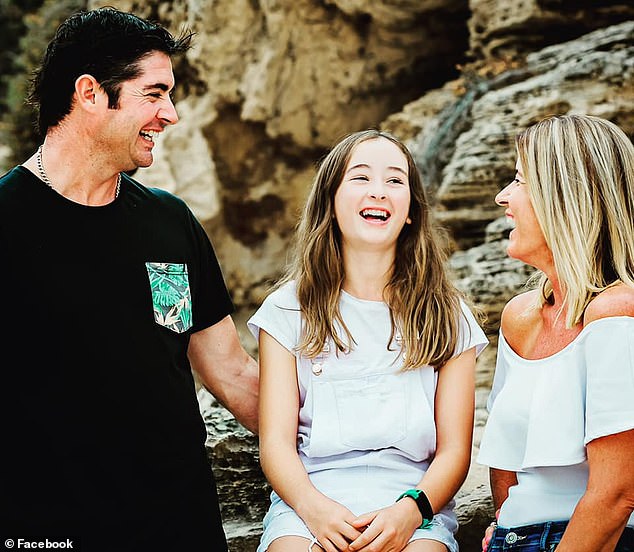 Amber (pictured, centre), 12, her father Clint (left) and her mother Fiona (right). The parents made a heartbreaking tribute to Amber on Thursday after she died in a helicopter crash in Broome on Saturday

Mother Fiona described her daughter as ‘generous, special and irreplaceable’.

‘I want to thank you, my darling angel girl, for gracing me with the best 12 years of my life,’ she said.

‘Your legacy will shine through us so brightly, Amber Jess. You were my best friend, and I will love you till the end of days.’

Her father Clint added that the time he had with his daughter was a ‘blessing’.

‘My beautiful Amber you are the most amazing and special young girl I have ever known and I feel so blessed to have called you my daughter,’ he said.

‘You have touched my heart in so many ways and I will never forget you my darling.’

In a moving family statement provided to Daily Mail Australia, relatives described Amber as an ‘all-rounder’ who excelled in academics, sports and community service. 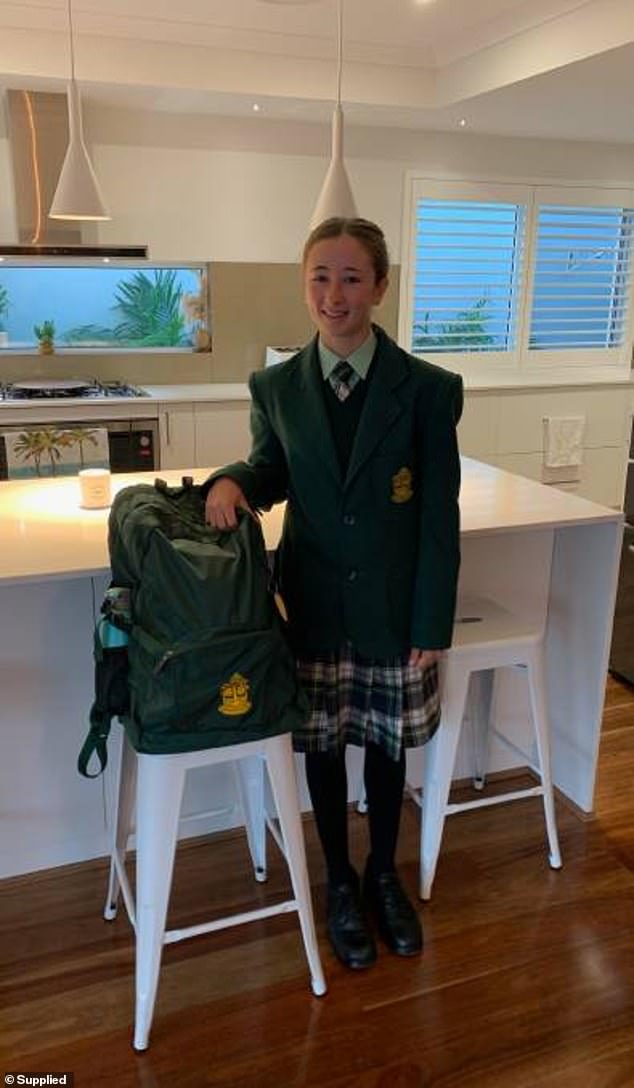 Amber in her new uniform for Fredrick Irwin Anglican School on her first day of Year 7 this year. She was named valedictorian in primary school and wanted to study medicine at university

A family friend has now started a GoFundMe page (pictured) to raise money for a memorial bench for Amber, which they plan to place in front of a Mandurah beach

‘She (Amber) really was an all-rounder. She loved sport but always got academic mentions and awards at school,’ the family said.

‘She was also a little adventurer and loved nature and animals… and a little prankster always making people laugh. She wasn’t the kind of kid that was in front of a screen.’

Having grown up in Mandurah, Amber called the beach her ‘happy place’ and loved spending time by the ocean.

A family friend has now started a GoFundMe page to raise money for a memorial bench for Amber, which they plan to place in front of a Mandurah beach.

Amber was valedictorian and an athletics champion of Falcon Primary School when she graduated last year. 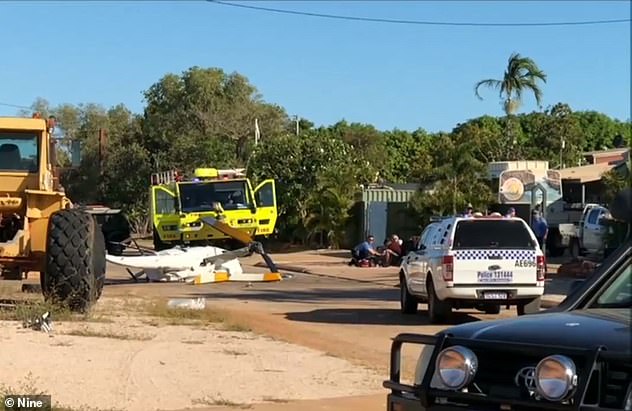 A picture of the crash site in Bilingurr, north of Broome, with police and emergency services attending the scene on Saturday 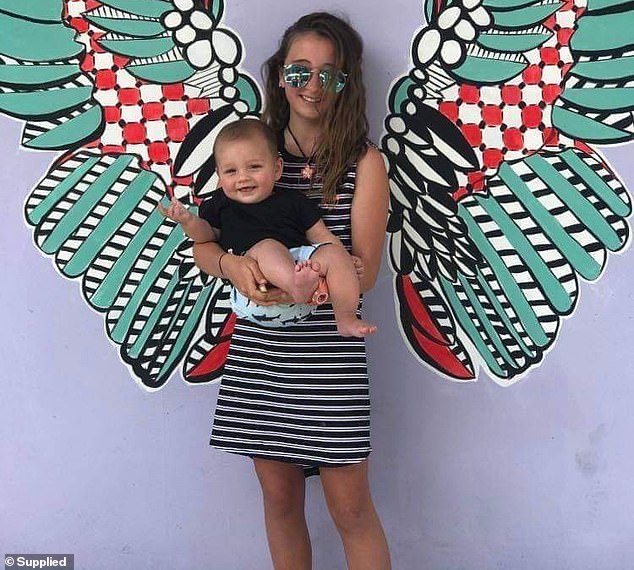 The 12-year-old started Year 7 at Fredrick Irwin Anglican School in Mandurah this year with aspirations of one day studying medicine at university.

She was also a keen sportswoman who enjoyed surfing, cross-country running and netball.

The netballer was recently selected for Mandurah’s Talent Development Squad (TDS) and was due to compete at state level after the school holidays.

Amber was a former member of the Mandurah Junior Council and helped in local events such as Crab Fest, beach clean-ups and NAIDOC celebrations.

Amber’s cousin Emily said: ‘She did junior council because she wanted to make the world a better place. She dreamed of it… and she did that.’ 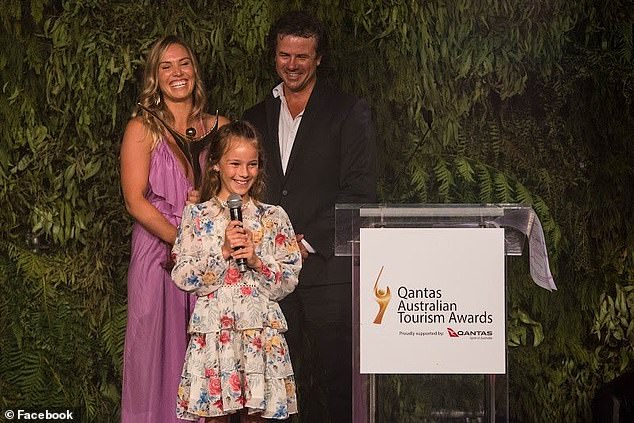 Mia Thomas, 12, (pictured, centre, with mum Sophie, left) survived a horror helicopter crash that killed her father Troy Thomas (right) on Saturday afternoon. Fiona sent her condolences to Sophie, who has lost her husband and father to her children

Emily said Amber’s legacy for surviving family members is to ‘live life to the fullest’ and ‘to love big and love others’.

‘As a 30-year-old woman, my little cousin has challenged me to live a better life – not because of the nature of this very tragic accident, but because of who she was and how she lived her life,’ she said.

The cousin recalled how Amber, Fiona and Clint would spend a lot of time together on their boat, fishing, surfing and skating or at the beach.

‘The three of them were on family adventures all the time – they were so close, they were never apart,’ she said.

She adored them and they adored her, and she knew how loved she was and they knew how much she loved them as well.’

Amber’s mother Fiona also sent their condolences to Mr Thomas’ wife Sophie, who is a close friend of theirs, and sent her best wishes to Mia and Ms Down, who are in hospital. 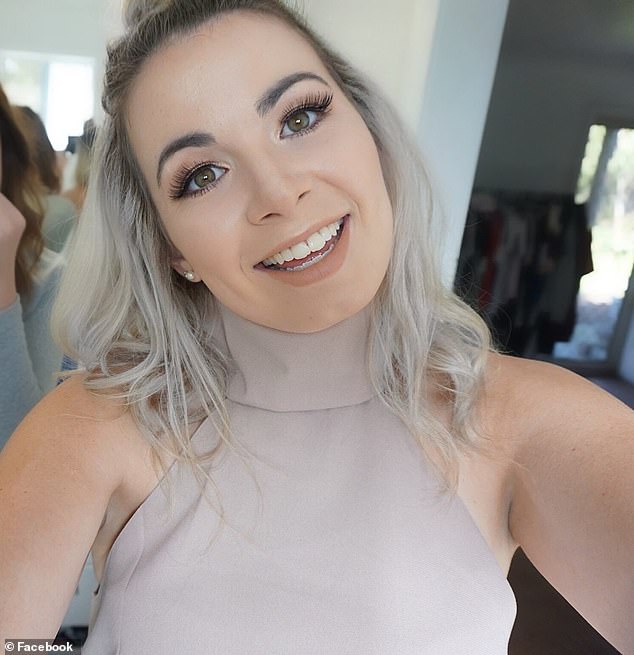 Fiona paid tribute to Mr Thomas and sent her best wishes to Mia Thomas and Maddison Down (pictured), who are both in serious but stable conditions in hospital

‘We express our condolences to our beautiful friend Sophie (Mr Thomas’ wife) who has lost her husband and the father of her children,’ she said.

‘We are hoping and praying for the best possible outcome for our two beautiful friends (Mia and Ms Down) who are fighting for their lives in this horrific accident.’

Clint is an oil worker and also keen fisherman – something he shared in common with Mr Thomas, who died in the crash.

Meanwhile, Amber’s mother Fiona is a Special Needs Education Assistant at Falcon Primary School, which is where she became friends with teaching aide Ms Down.

A close friend of Amber’s family, Ms Down was accompanying Amber on the helicopter trip to Broome.

‘Maddie (Maddison Down) is like a big sister to Amber who played a very important role in her life,’ a family spokesman previously said. 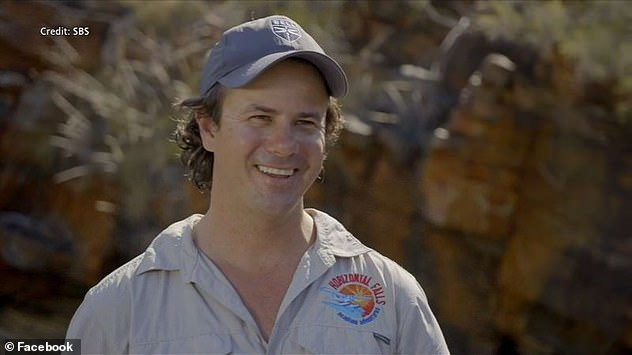 Mr Thomas, 40, (pictured) had been driving his helicopter in Broome, WA on Saturday when the aircraft crashed shortly after takeoff

Ms Down was critically injured in the crash and has been in the intensive care unit of Royal Perth Hospital since the crash – but is now in a serious but stable condition.

Mia was also rushed to hospital after the crash and is now also in a serious but stable condition at Perth Children’s Hospital.

Mr Thomas, who was a leading pioneer in the state’s tourism industry and owner of Horizontal Falls Seaplane Adventures, has since been remembered as an ‘inspiring father, brother, son and friend’.

The group had been on their way to a family holiday when the aircraft plummeted to the ground shortly after take-off. 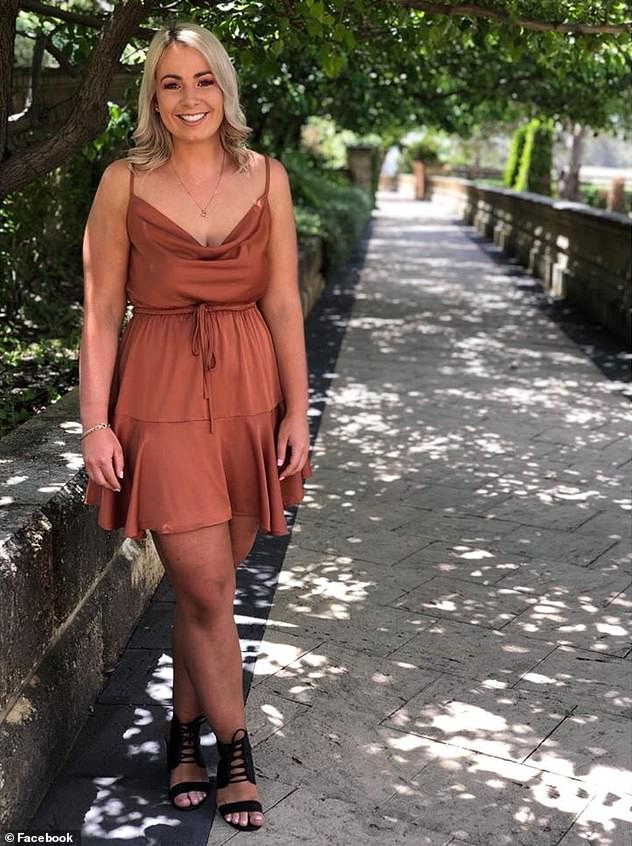 Ms Down (pictured) taught at Falcon Primary School in Mandurah, south of Perth, which is where Mia and her Amber previously attended and where Fiona works

Mr Thomas was killed in the impact of the crash, and Amber was flown to Broome Hospital but tragically died two hours later.

Tributes have poured in for the 40-year-old including a heartbreaking message from former West Coast Eagles star and sports commentator, Karl Langdon, who had breakfast with Mr Thomas just hours before his death.

‘To Sophie, the kids and whole Thomas clan I’m mourning with you today. I still cannot believe what has happened,’ he wrote.

‘We lost an inspiring father, brother, son and friend yesterday.

‘Troy you did so much with your life, I met you as a teenager in Mandurah and at 19 you were chartering you own boat Rare Breed.

Mr Thomas had run the award-winning Horizontal Falls and Seaplane Adventures since 2006. 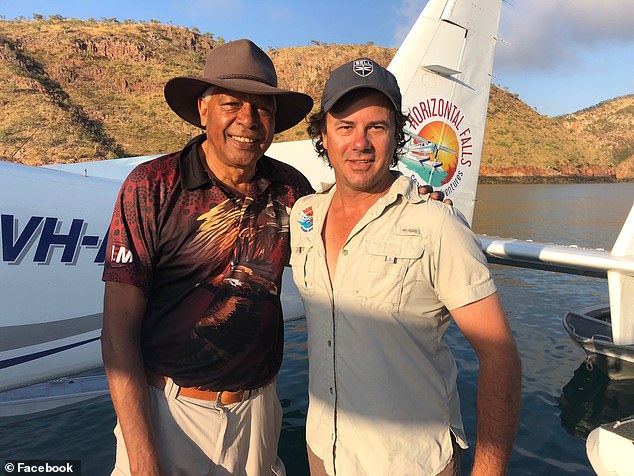 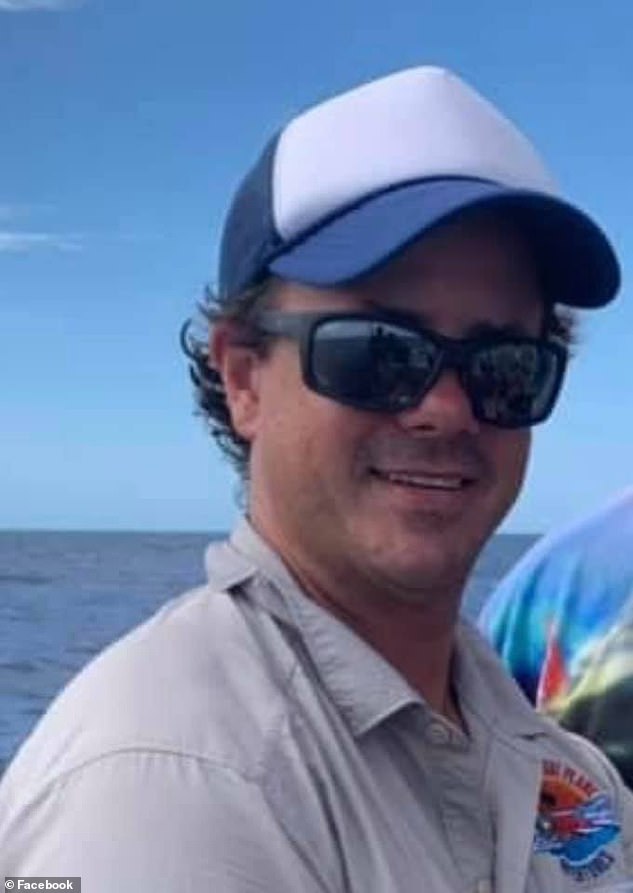 August 6, 2020
Comments Off on Ancient ‘hell ants’ had deadly scythe-like mandibles that they used to pin prey

July 31, 2020
Comments Off on Coldstream Guards investigated by police after bar brawl with Queen’s footmen near Buckingham Palace

July 7, 2020
Comments Off on Health Minister Greg Hunt warns all of Victoria could be locked down if Melbourne outbreak worsens

FOURTEEN times: Over three years, Heard claims this is the tally of attacks Depp launched on her

July 10, 2020
Comments Off on FOURTEEN times: Over three years, Heard claims this is the tally of attacks Depp launched on her

July 13, 2020
Comments Off on China orders woman working in Australia to report to police after criticising President Xi Jinping

July 10, 2020
Comments Off on Moment new tire flies off family car and crashes into oncoming vehicle shortly after it was fitted

July 18, 2020
Comments Off on Moment ‘Karen’ blows a kiss at a landscaper in California before demanding to see his ‘papers’

July 9, 2020
Comments Off on Property prices in Sydney’s Ryde surge by double-digit figures in six months despite COVID-19

ABUL TAHER visits Jungle camp in Calais, saying you pay a fee and they’ll keep putting you on a boat

August 9, 2020
Comments Off on ABUL TAHER visits Jungle camp in Calais, saying you pay a fee and they’ll keep putting you on a boat
Foreign students WON’T be let back into ACT as plans for a ‘safe passage program’ are put on hold
Giant 200kg fur seal is found with a huge HOOK poking through its face