Coles and Woolworths have reinstated product buying limits in Victoria after customers raided shelves ahead of Wednesday’s lockdown.

Metropolitan Melbourne and the Mitchell Shire will be thrust back into a six week lockdown as a second outbreak of COVID-19 ravages the state.

Just one day after buying limits were lifted, supermarkets were forced to bring them back into effect to avoid customers stripping shelves entirely bare.

Video and pictures taken at supermarkets throughout the state show queues wrapped around car parks and through shopping centres.

Everybody in locked down suburbs, aside from those living inside 10 housing commission flats, will still be able to do their grocery shopping. 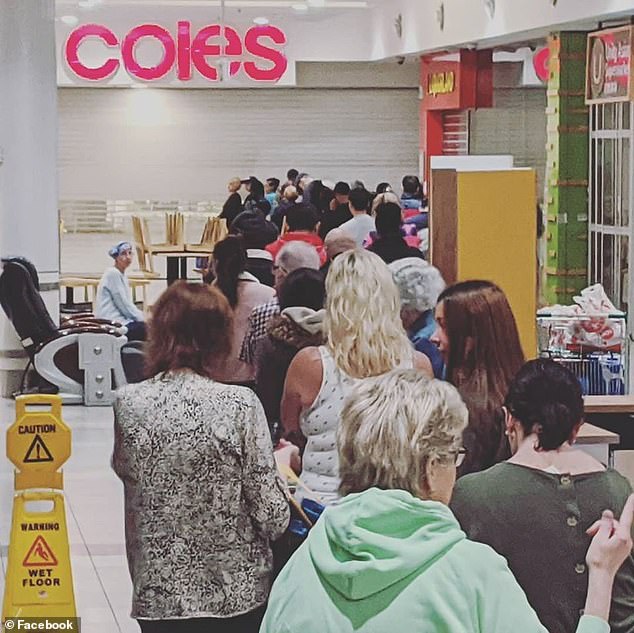 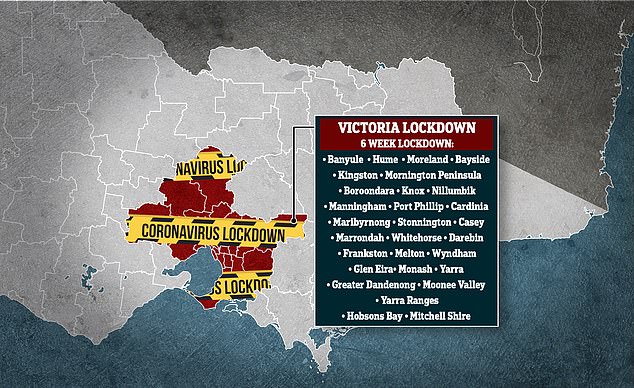 The stay-at-home orders will come with four exemptions, including grocery shopping, exercise, caring for a relative and going to work or school.

Toilet paper is capped at one packet per customer, while restrictions were also imposed on pasta, rice, hand sanitiser and paper towel.

The products impacted by buying limits at Coles include:

The limits will be implemented at all Coles supermarkets, Coles Express and Coles Online within the affected local government areas.

Coles chief executive Steven Cain said the new limits were disappointing but a necessary measure to avoid widespread panic buying which was experienced in the early days of the pandemic.

‘Our thoughts are with the many Victorians who will now be required to isolate at home, and we will continue to work with the state government to provide whatever assistance they need,’ Mr Cain said in a statement. 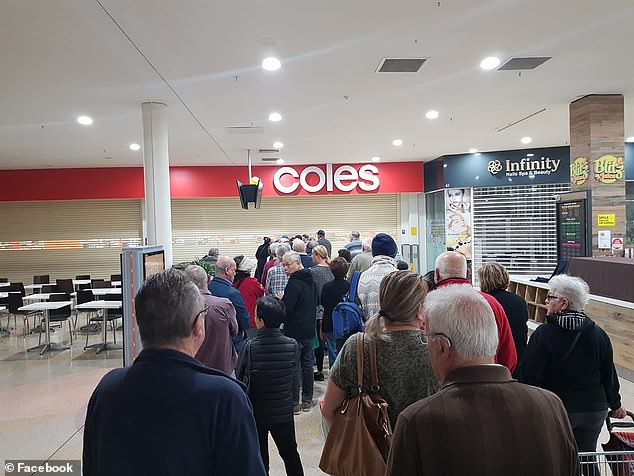 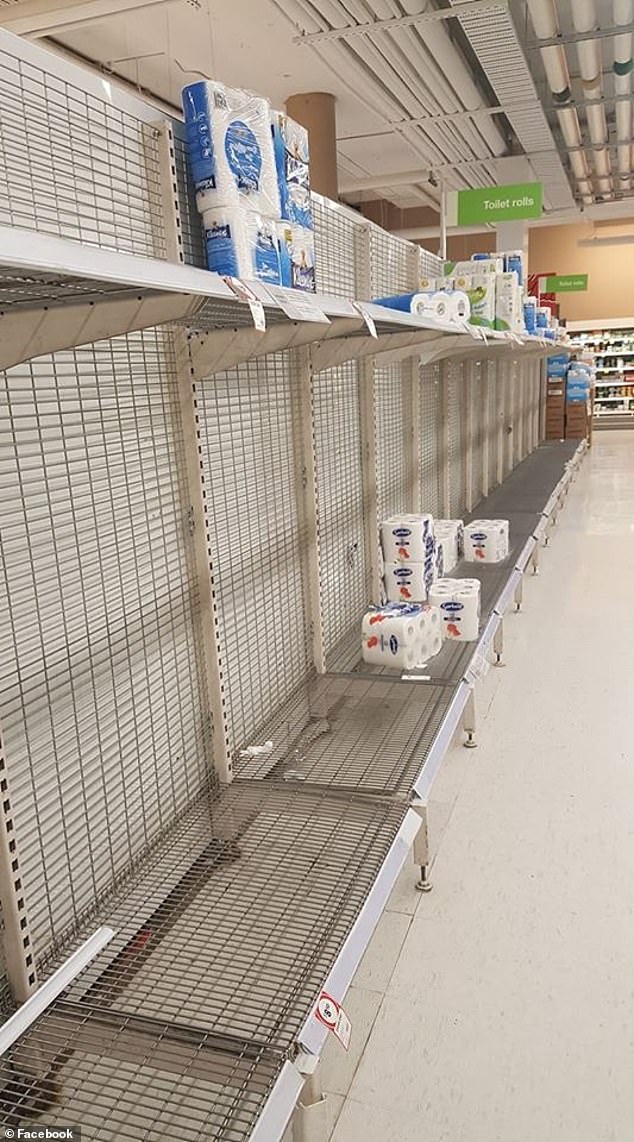 ‘To help provide a safer shopping experience in our stores, we would ask that customers continue to treat our team members with respect, observe social distancing in stores, make use of the sanitising stations at the entrance, and plan their visit so they can be ‘speedy shoppers’.’

Supermarkets are again assuring customers that there is plenty of supply and no need to attempt to stockpile.

Despite being allowed to shop during lockdown, large queues of customers were seen outside Melbourne’s supermarkets on Tuesday night as residents stocked up on supplies before six weeks of home confinement.

‘If anyone in Melbourne is wondering, yes the supermarket is already a terrifying place to be,’ a Twitter post reads.

A Woolworths spokesman said the restrictions were necessary following the surge in demand overnight.

‘All Woolworths supermarkets in Victoria will remain open throughout the next six weeks of stage three restrictions just as they did earlier this year,’ he said.

‘We have more than enough stock flowing from our distribution centres into stores to support all our customers’ food and grocery needs. We encourage our customers to continue shopping as they usually would.’

The hard lockdown comes into effect from 11.59pm on Wednesday. 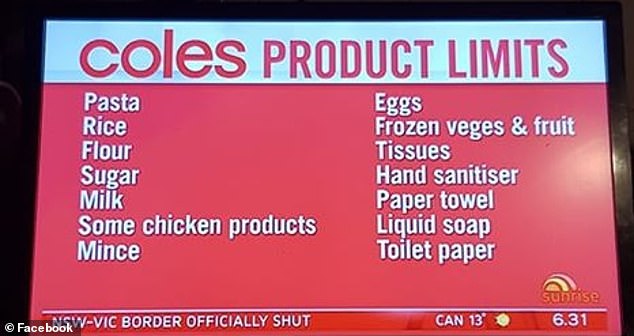 Customers will be limited to buying two of each product, except for toilet paper, which is restricted to one packet per customer 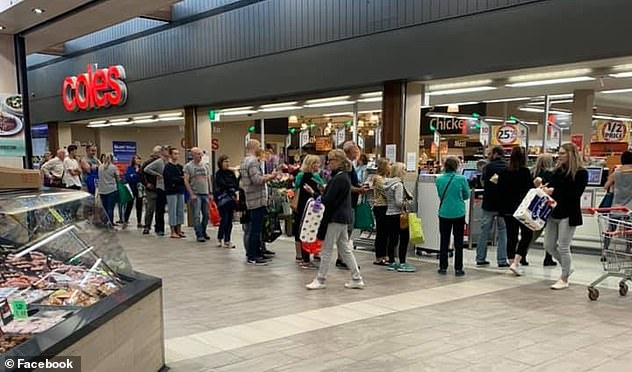 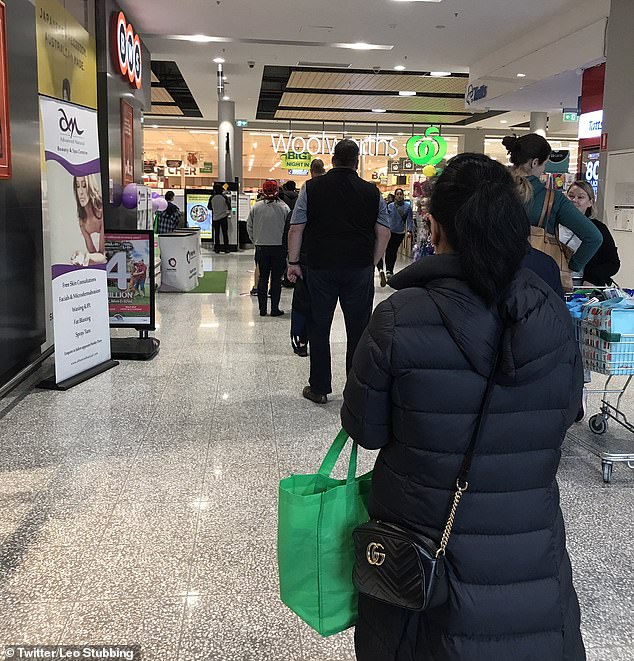 Residents will be only allowed to leave their homes for work and study, giving or receiving care, shopping for essentials and daily exercise near where they live.

Gatherings of more than two people who do not live together will be banned; beauty services and entertainment venues will shut; and cafes, restaurants and pubs will be able to offer takeaway only.

Year 11 and 12 pupils and special schools will go back to class but holidays will be extended by a week for students up to year 10, with remote learning a possibility after that.

Restrictions for the rest of Victoria remain the same – but residents can only enter Melbourne for caregiving, essential shopping and work or study.

Under-pressure Premier Daniel Andrews said the new lockdown was essential to avoid ‘thousands and thousands’ of cases and ‘many, many people in hospital.’

‘This is a pandemic and it will kill thousands of people if it gets completely away from us,’ he said.

The suburbs which are impacted by the product buying limits are:

TV presenter, 28, viciously beaten by a stranger who tried to rape her in front of six-year-old son

August 3, 2020
Comments Off on TV presenter, 28, viciously beaten by a stranger who tried to rape her in front of six-year-old son

August 4, 2020
Comments Off on Trump calls deadly Beirut explosions a ‘terrible attack’ and says US is ready to assist Lebanon

‘Fury’ in Melbourne over spike that ruined Australia’s COVID-19 recovery: and it’s set to get worse

August 3, 2020
Comments Off on ‘Fury’ in Melbourne over spike that ruined Australia’s COVID-19 recovery: and it’s set to get worse

August 2, 2020
Comments Off on The Bizarre final message missing Caboolture dad sent before vanishing a year ago

August 3, 2020
Comments Off on Paulina Porizkova shares topless selfie from her garden in New York

Productivity Commission: young have missed out on pay rises for two decades, will need grandparents

July 30, 2020
Comments Off on Productivity Commission: young have missed out on pay rises for two decades, will need grandparents

July 11, 2020
Comments Off on Why the next three days are crucial in Victoria’s fight against COVID-19 after an explosion of cases

Decapitated and dismembered body of a man, 34, is found in luxury Manhattan apartment block

July 15, 2020
Comments Off on Decapitated and dismembered body of a man, 34, is found in luxury Manhattan apartment block

August 5, 2020
Comments Off on Man cheats death after falling in front of car on Sydney’s M7

REVEALED: The $21 shampoo that is one of the most-searched-for products on Google for 2020

July 10, 2020
Comments Off on REVEALED: The $21 shampoo that is one of the most-searched-for products on Google for 2020
Johnny Depp credits Sir Elton John for helping him in his sobriety battle
Victoria records 134 new cases of coronavirus