Cop who placed Elijah McClain in a deadly chokehold is fired

Cop who placed Elijah McClain in a deadly chokehold is fired

One of the three Colorado policemen involved in the killing of Elijah McClain in August was fired on Friday, after receiving photos of officers fooling around and re-enacting McClain’s killing, which were shown to McClain’s family.

Jason Rosenblatt was fired on Friday for receiving the photo, to which he responded: ‘Ha ha ha”.

The day before another officer, Jaron Jones resigned from Aurora police for staging the disturbing images. His two co-workers, Erica Marrero and Kyle Dittrich, were fired on Friday for appearing in the photo.

The image shows Jones pretending to choke another officer, while Marrero and Dittrich look on and laugh.

The police union reacted with anger to Rosenblatt’s firing, saying he was only terminated for receiving the photos, which he had no part in making, and saying there had not been sufficient investigation.

McClain, 23, a massage therapist who loved animals and who taught himself to play the guitar and the violin, serenading animals to soothe them, died after police held him in a choke hold on August 24. 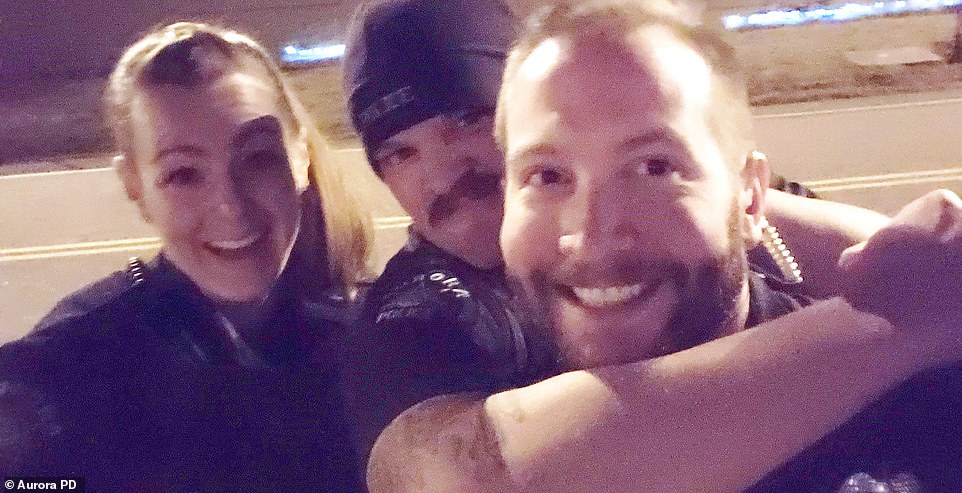 Jaron Jones resigned from Aurora police on Thursday for staging the ‘re-enactment’ photo. Erica Marrero and Kyle Dittrich were fired on Friday for appearing in the photo, which McClain’s family said was ‘a new low’ for the Aurora police department 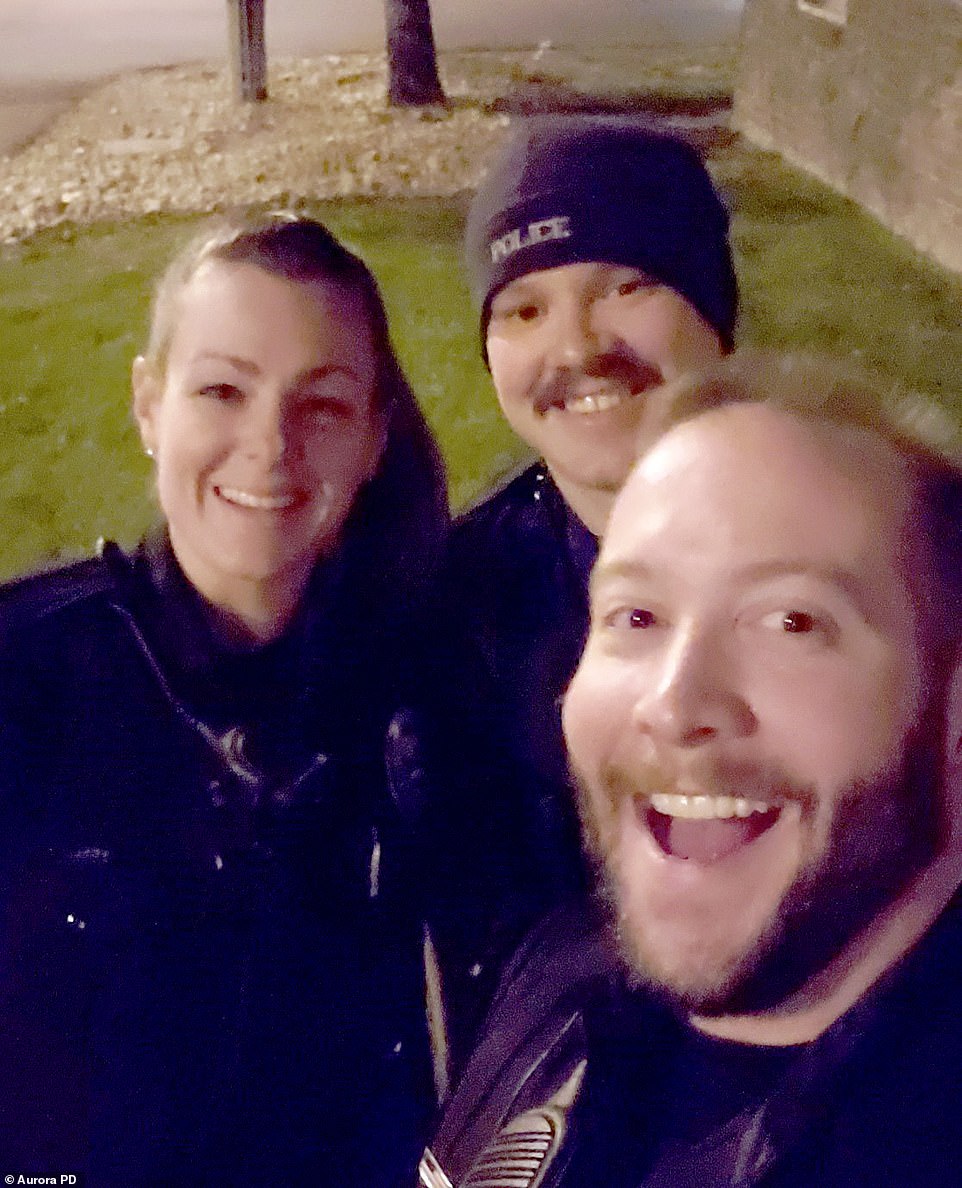 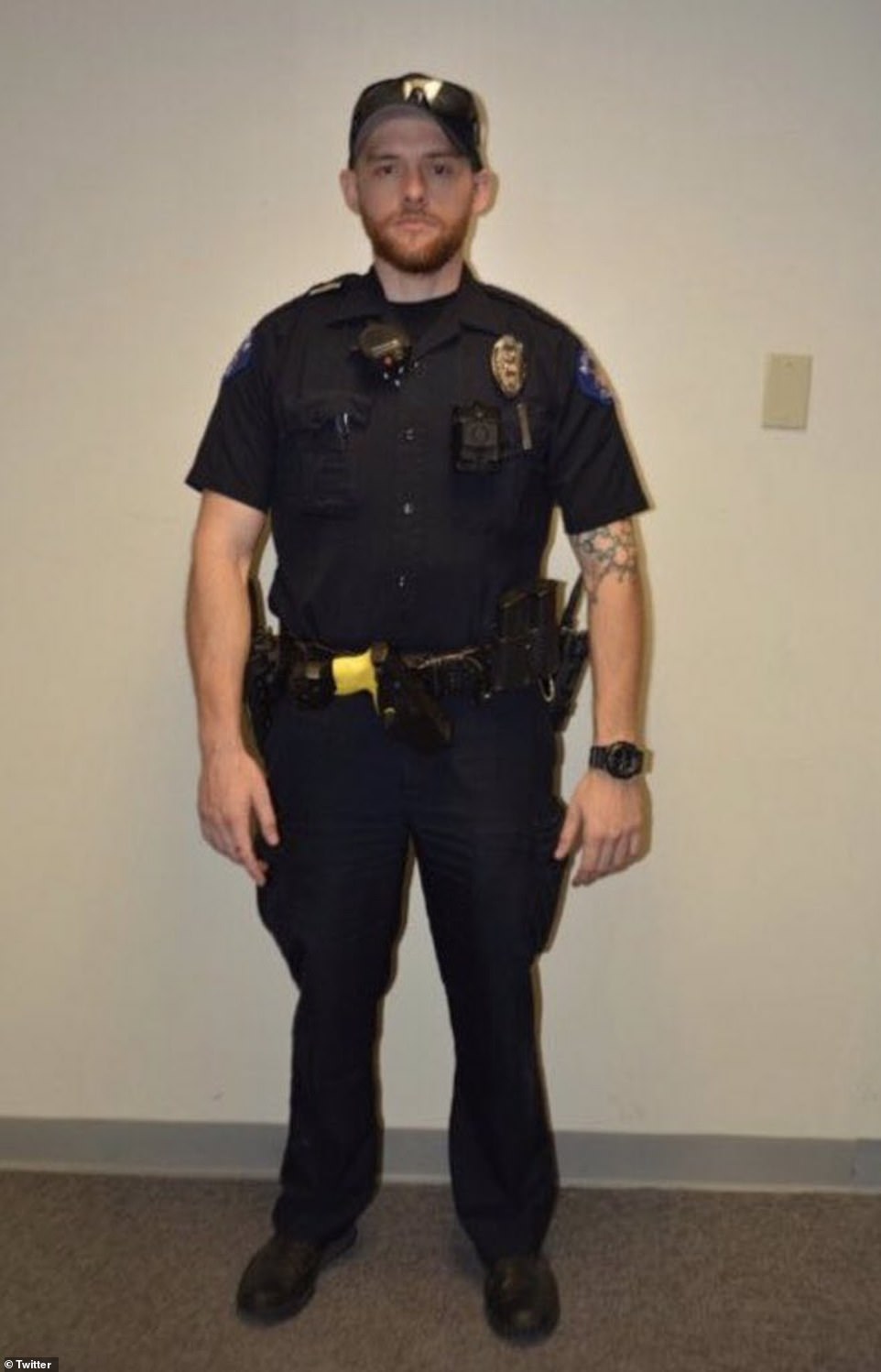 An asthmatic, was walking home from a convenience store in Aurora at 10:30pm when someone called 911, saying he ‘looked sketchy’ and was wearing a ski mask and waving his arms.

The police arrived and, after struggling to handcuff McClain, officers brought him to the ground and used a carotid hold, which restricts blood to the brain to render someone unconscious.

When medical responders arrived, after about 15 minutes, paramedics injected him with ketamine, a powerful sedative. He died on the way to hospital.

‘Just when we thought the Aurora Police could not be any worse, they somehow find a new low,’ the McClain family said in a statement.

‘This is a department where officers tackled an innocent young black man for no reason, inflicted outrageous force – including two carotid chokeholds – for fifteen minutes as he pled for his life, joked when he vomited, and threatened to set a dog on him for not lying still enough as he was dying.

‘They tampered with their body cameras to hide the evidence. They exonerated the killers.

‘They deployed riot police and spewed pepper gas on peaceful protesters at a vigil of mourners playing the violin. And now this.’ 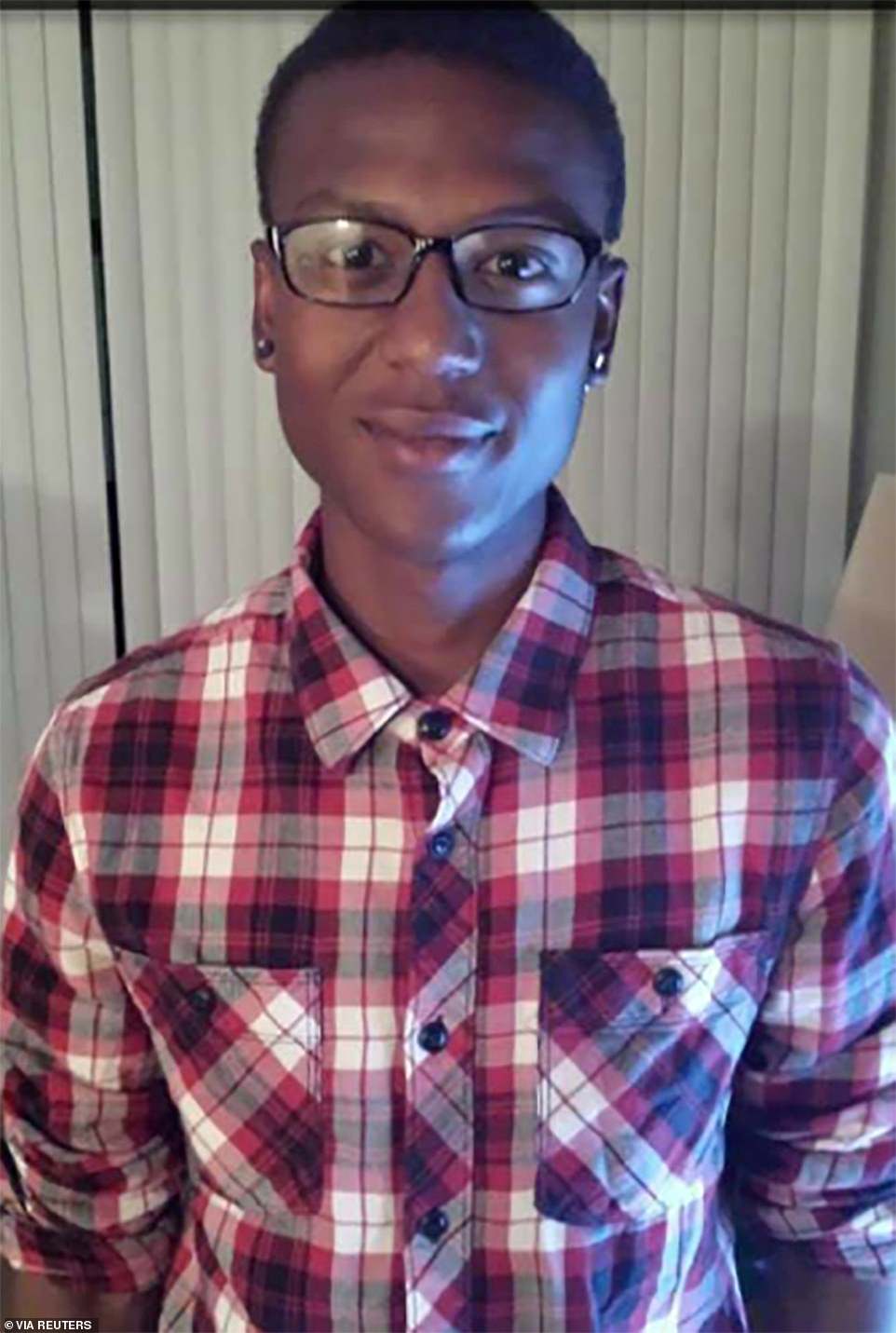 Elijah McClain, 23, was killed by three white police officers in Colorado in August

The three officers were called when McClain was spotted walking home from a store. Rosenblatt, center, was fired on Friday but the other two remain in the force

‘It really reopens wounds in our community,’ he said.

The U.S. Attorney’s Office, the U.S. Justice Department’s Civil Rights Division and the FBI also are looking into the photos to see if they should launch a civil rights investigation.

The three officers who attended the 911 call on August 24 – Nathan Woodyard, Rosenblatt and Randy Roedema – were placed on administrative leave, but they were all reinstated.

On Friday Aurora Police Association condemned the firing of Rosenblatt, without mentioning him by name.

The APA said he had been denied due process. 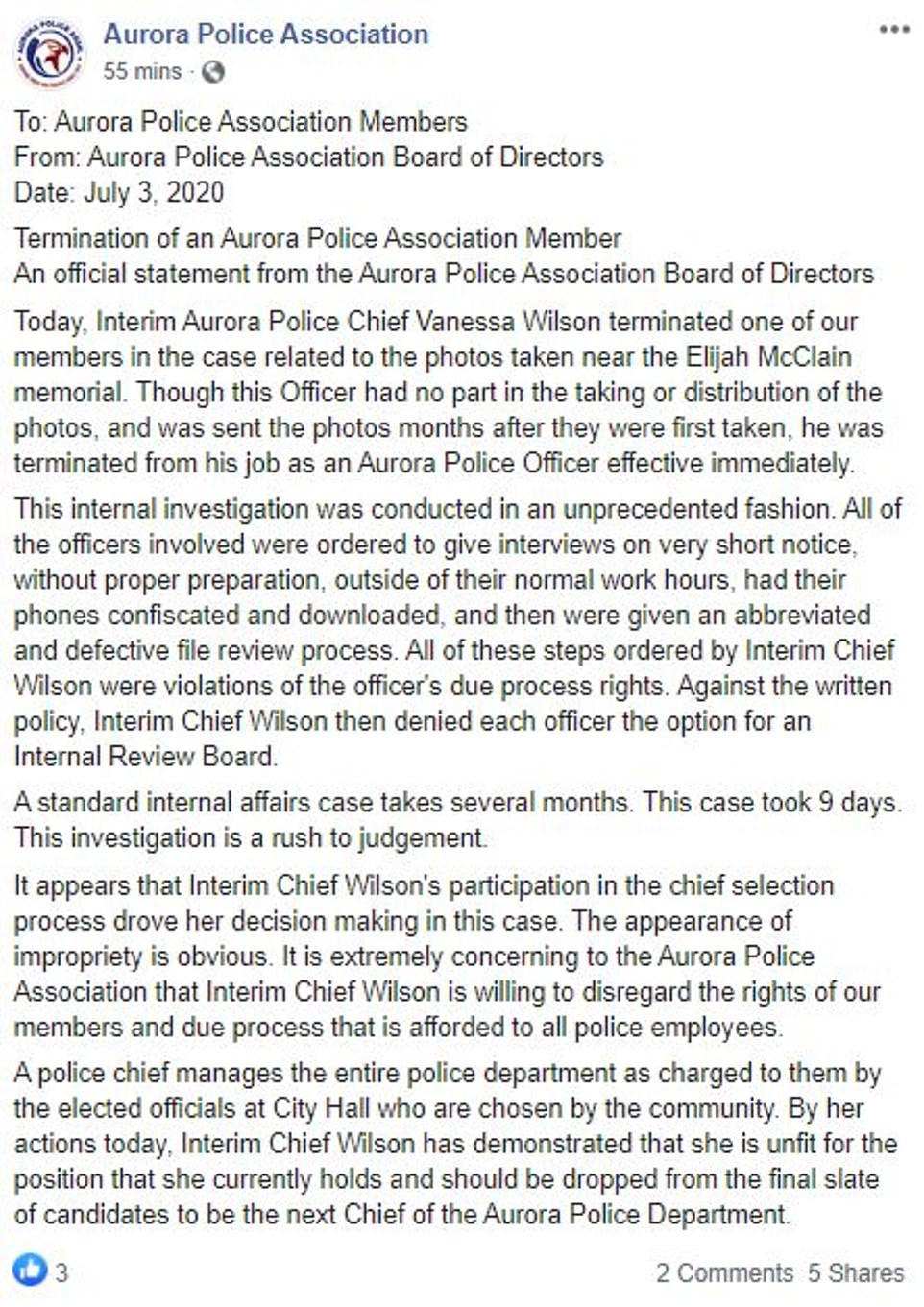 Dave Young, district attorney, said at the time that charges could not be brought against the three because a pathologist could not determine whether it was homicide.

McClain’s death generated renewed attention after the death of George Floyd while in police custody in Minneapolis in May stirred worldwide protests over racial injustice and police brutality.

The governor of Colorado, Jared Polis, recently appointed the Attorney General, Phil Weiser, as a special prosecutor to look into McClain’s case.

Rosenblatt was not fired for his role in the killing, but rather for receiving the image.

Meghan McCain, co-host of The View, tweeted his final words, as heard on police audio.

Meghan McCain was among those to express outrage at McClain’s killing, tweeting on July 1 her disgust at the cops 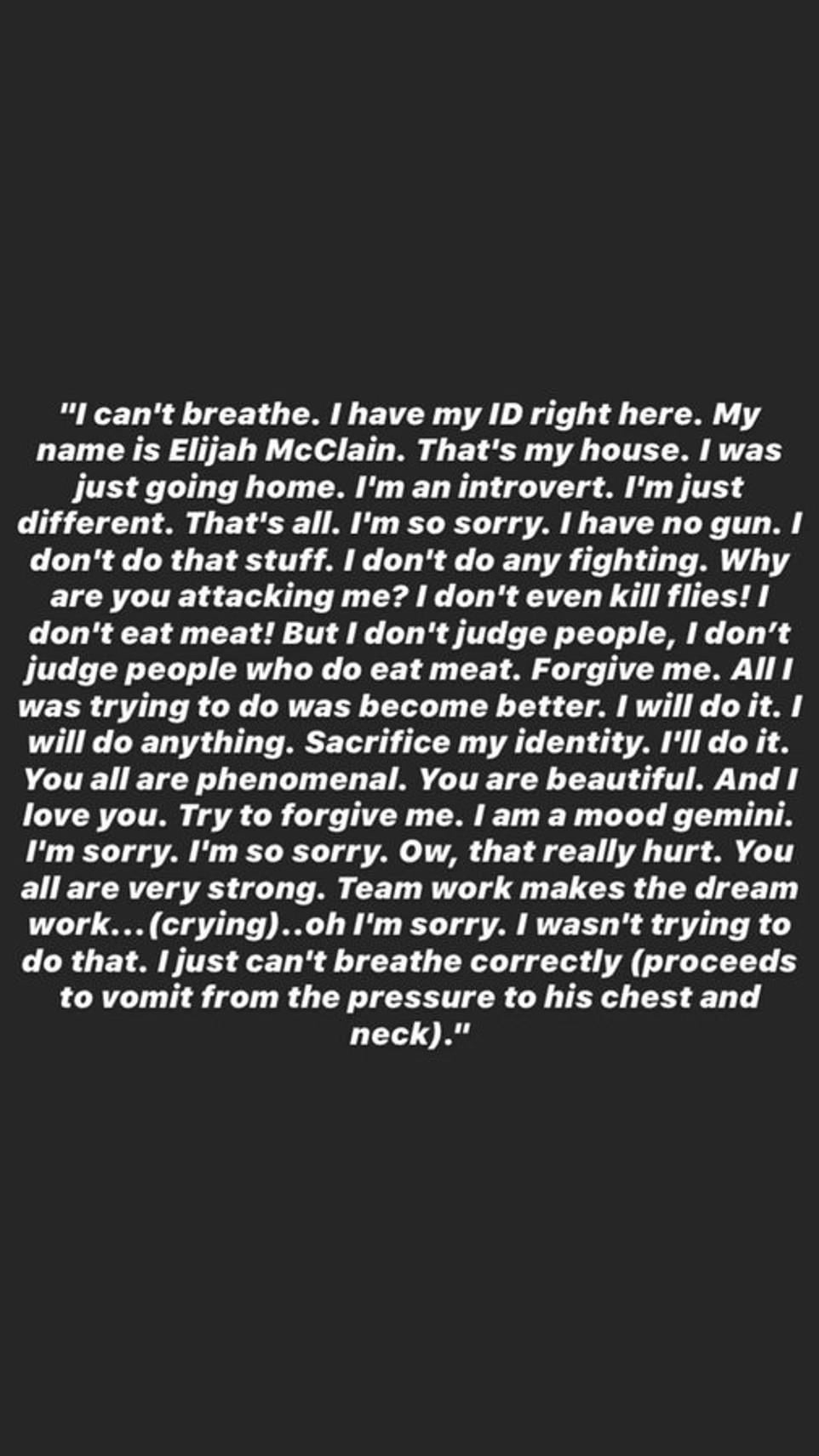 In the audio, McClain tells the police he isn’t armed, and has no intention of hurting anyone, saying: ‘Why are you attacking me? I don’t even kill flies! I don’t eat meat! But I don’t judge people.’

Later, as the choke hold tightens, he says: ‘Oww – that really hurt. You are all very strong. Team work makes the dream work.’

He then begins crying.

‘Listen to the audio and tell me there isn’t true, unabashed evil in this world,’ she tweeted.

July 20, 2020
Comments Off on Princess Beatrice isolated with Prince Andrew so he could ‘walk her down the aisle’

July 13, 2020
Comments Off on Driver uses trick to cover up licence plate to stop other motorists identifying he’s from Victoria

Actors, writers and producers warn of ‘reverse racism’ in the film industry

July 11, 2020
Comments Off on Actors, writers and producers warn of ‘reverse racism’ in the film industry

July 24, 2020
Comments Off on Australian mother uses her $89 Kmart air fryer to make her own vegetable crisps

John Bolton: Donald “Trump Is Capable of Almost Anything”

July 29, 2020
Comments Off on John Bolton: Donald “Trump Is Capable of Almost Anything”

Man, 19, charged after trying to abduct a girl, 9, from Tennant Creek home

July 24, 2020
Comments Off on Coronavirus can infect people 26 FEET away in cold moving air, finds study

July 28, 2020
Comments Off on Amazon takes on grocers with ‘free’ home delivery

Twitter hack was orchestrated by group of young pals

July 18, 2020
Comments Off on Twitter hack was orchestrated by group of young pals