The removal of lockdown restrictions to help kickstart Australia’s crippled economy could be delayed by at least a week by the Black Lives Matter protests.

Thousands flouted social distancing rules when they flocked to mass protests across the nation on Saturday to take a stand for the rights of indigenous Australians in the wake of George Floyd’s death in the U.S.

But it may come at a $1billion cost to the economy and delay a return to work for thousands of Australians.

The Australian Health Protection Principal Committee believes it will take up to a fortnight to assess whether the protests have caused a fresh outbreak of new cases. 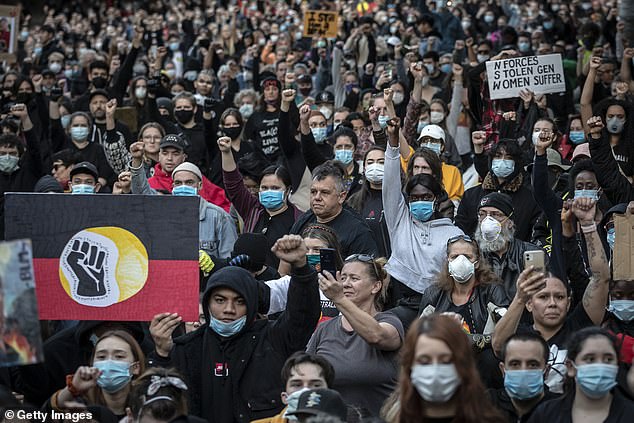 Authorities won’t know for up to two weeks whether Saturday’s Black Lives Matter protests will spark an outbreak in new coronavirus cases. Pictured are protesters at the Sydney rally who packed Belmore Park

New South Wales was the only state to record new coronavirus cases on Tuesday with two returned overseas travellers who tested positive.

There were zero community transmitted cases across the entire country.

The National Cabinet was expected to update its three-stage COVID-19 road map when it meets this Friday and fast-track plans to reopen the economy.

But any plans to rapidly scale back of social restrictions will likely be put on hold to monitor the impact of the mass protests have on coronavirus cases in the coming weeks, The Australian has been told.

The National Cabinet will receive advice from the AHPPC prior to meeting this week. 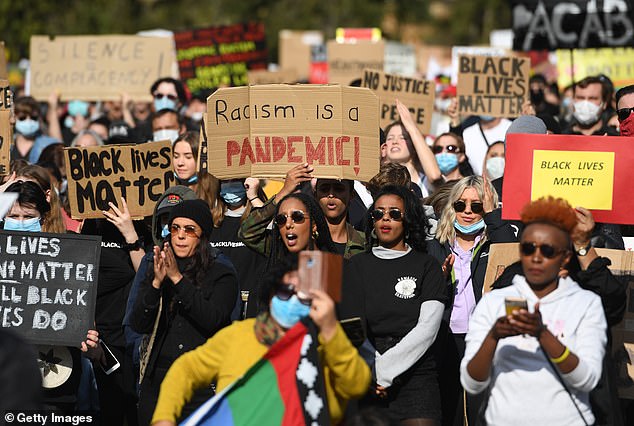 The Black Lives Matter protests could delay the easing of lockdown restrictions.Pictured are protesters taking a stand in Adelaide on Saturday

The cost to the economy of restrictions remaining in place could be up to $6.3bn a month, according to Treasury estimates.

Should restrictions remain in place for a week longer than intended, the economy would take an extra hit of well over $1billion.

‘What we want to do is to get Australians back to what we call a better normal,’ federal health minister Greg Hunt told the publication.

He hinted at the possibility to ‘increase actions and decrease the restrictions’ if Australia’s progress in flattening the curve.

‘I am hopeful that over the course of this week we’ll continue to see progress and, each week that goes by with reduced numbers and a greater flattening of the curve, there’s increased potential across a range of different activities,’ Mr Hunt said. 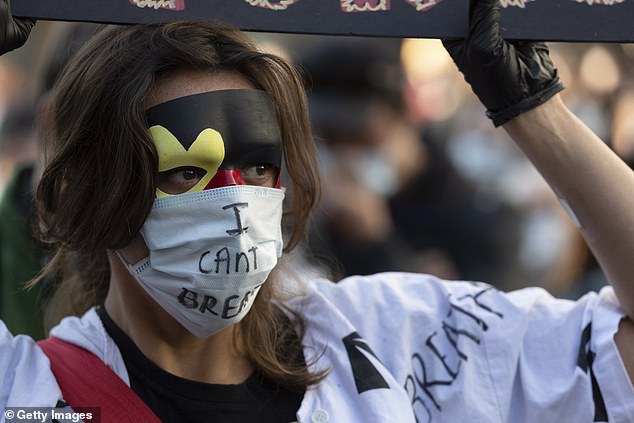 The Black Matter Lives protests could come at a price and cost the economy more than $1billion and delay a return to work for thousands of Australians. Pictured is a woman wearing a face mask at Sydney’s Town Hall on Saturday

Health Services Union and Maritime Union of Australia is campaigning for most social restrictions to be eased, including the return of fans at sporting matches.

Their views are in contrast to the Australian Council of Trade Unions, which fears the easing of restrictions too soon could be catastrophic in sparking a second wave of new infections.

‘Restrictions should not be eased before the medical professionals recommend that, and until we can be sure that the workplaces that Australians will be returning to are safe for them to work in while we are still battling the virus,’ ACTU secretary Sally McManus said.

Bushfires could plunge Australia’s economy into a recession

August 2, 2020
Comments Off on Bushfires could plunge Australia’s economy into a recession

Man guilty of trying to smuggle $150m cocaine into Australia

August 2, 2020
Comments Off on Man guilty of trying to smuggle $150m cocaine into Australia

Bookshelf that led to drugs operation by Colombian gang in Sydney

August 4, 2020
Comments Off on Bookshelf that led to drugs operation by Colombian gang in Sydney

August 3, 2020
Comments Off on Evacuation zone is set up ahead of 46C Saturday as Australian towns on brink of humanitarian crisis

July 31, 2020
Comments Off on Coronavirus Australia: Pubs and bars reopen as restrictions lift

August 3, 2020
Comments Off on High-tech phone cameras to catch drivers texting to be switched on in NSW this SUNDAY

August 4, 2020
Comments Off on Home and Away’s Joel McIlroy charged with assaulting a female police officer

Fury as Sydney goes ahead with NYE fireworks amid bushfires

August 3, 2020
Comments Off on Fury as Sydney goes ahead with NYE fireworks amid bushfires
Australia must join ‘Cold War’ against China says US senator
Sydney boy, 5, drowned when boat capsized on first fishing trip