A recording of Johnny Depp begging ex-wife Amber Heard to ‘cut him’ while he wielded a knife in front of her was played to the High Court today.

The audio recording taken by Amber Heard was yet another piece of evidence in her claims that he abused her on 14 separate occasions.

On the stand today, Depp was quizzed about the recording by QC Sasha Wass, who is defending The Sun after the actor sued the newspaper for libel for calling him a ‘wife beater’.

Commenting on the muffled audio dating back to July 2016, Ms Wass said: ‘You’re threatening to cut yourself in front of Ms Heard and you’re actually holding a knife at the time.

Depp said: ‘I was asking her to cut me… I felt that was what she was doing anyway.’

It came after the court heard that Depp threw a phone at Amber Heard and called her ‘Amber Turd’ after she allegedly defecated in their bed after a blazing row on her 30th birthday party in which he threw a champagne bottle at her.

The 57-year-old actor is being cross-examined on the fourth day of his libel trial at the High Court in London, where he is facing questions about alleged assault against his ex-wife in LA in 2016. 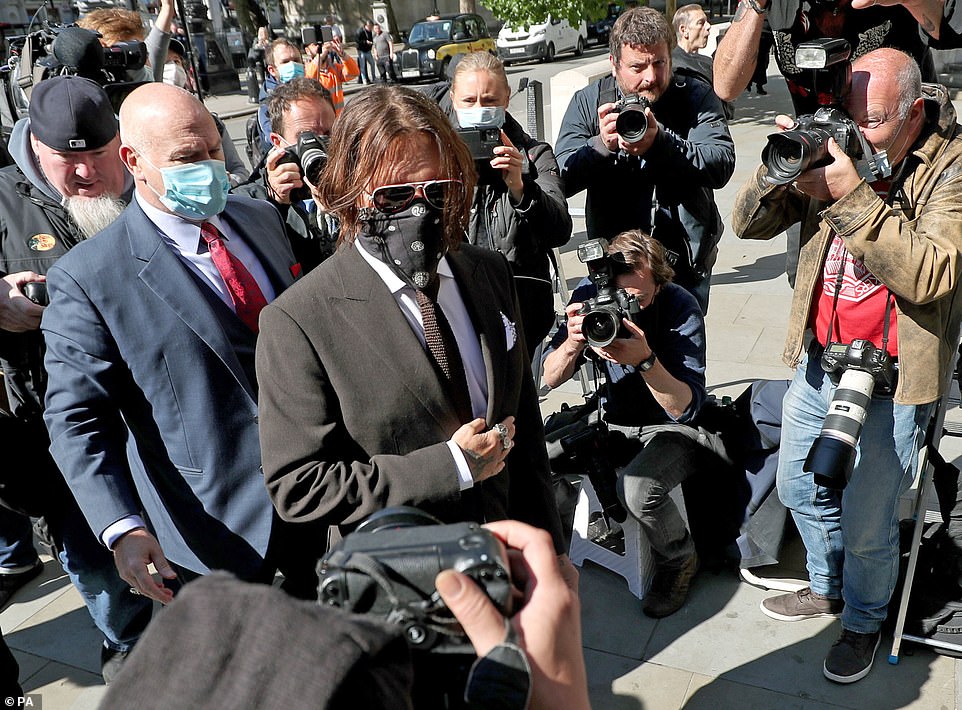 On the stand today, Depp was quizzed about the recording by QC Sasha Wass, who is defending The Sun after the actor sued the newspaper for libel for calling him a ‘wife beater’. 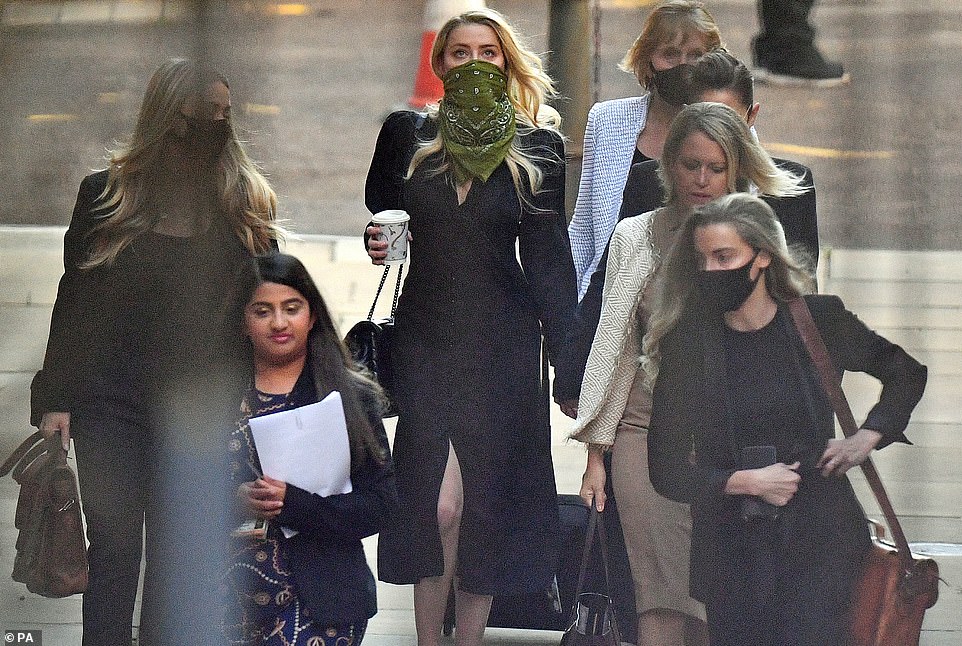 The audio recording taken by Amber Heard was yet another piece of evidence in her claims that he abused her on 14 separate occasions.

Depp asks Amber Heard to cut him in recording

HEARD This is really pretty.

DEPP Thanks. You want to cut me somewhere?

HEARD Do I want to cut you?

HEARD Why would I do that?

DEPP I need to do what I want.

HEARD I know. I know it hurts. I feel the same way.

DEPP Cut me. I want your mark.

DEPP No, thank you. No, thank you. There’s sperm on the pillows. Cut me. If you don’t, I will. Cut me. Eliot Spitzer won’t ask for this because he’s a f***ing conservative prick. Cut.

HEARD Please don’t cut yourself. Please. I know it hurts.

DEPP You do it.

HEARD I would never cut you.

HEARD I would never do that to you. Please don’t.

DEPP Don’t you tell me—

HEARD Please don’t do that.

HEARD Put the knife down.

HEARD Don’t. Don’t do that. Do not do that, Johnny. Please. You’re going to hurt—

DEPP I want to look at you.

DEPP I want to look at you.

HEARD I know you’re in pain, but stop. Please don’t—

DEPP There’s a way for the pain to go away.

The court was shown a photograph of Heard’s bruised face after she claims Depp hurled a phone at her face as they argued over the so-called ‘defecation incident’ a month after the Hollywood legend decided to divorce his wife over the soiling of their bed.

The actor told the court he believes that Heard, 34, was responsible for the defecation but under questioning admitted that it could have been her ‘crass’ trans activist friend iO Tillet Wright.

He arrived at Heard’s birthday party on April 21, 2016 around two hours late after receiving some bad news about his financial affairs from his accountants and smoking cannabis to relieve his stress.

The Hollywood legend admitted that he went to bed to read a book after Heard’s guests had gone and started arguing with her about his behaviour.

As the confrontation escalated, Heard claims that her ex-husband threw a magnum champagne bottle at her and shoved her to the floor several times before leaving a note reading ‘Happy F***ing Birthday’.

Depp claims that Heard had been ‘drinking heavily’ and attacked him while he was reading in bed, punching him in the face four times before he grabbed her arms to stop her.

He says the next day Heard or one of her friends ‘defecated’ in their marital bed, and he believes Heard was responsible after she later told the building manager that it was ‘just a harmless prank’ – at which point Depp ‘resolved’ to divorce her.

A month later he came to collect his things from their LA apartment after deciding to divorce Heard over the defecation incident and another row began, during which Heard claims he threw the phone but Depp claims he did not touch her.

Depp is suing The Sun for libel after it labelled him a ‘wife beater’. He called the accusation ‘utter falsity’ and ‘fraudulent’ and has claimed Heard abused him throughout their marriage.

The barrister said Depp had arrived late at the party after being given some ‘rather unfortunate news’ about his financial affairs at a meeting.

She asked him: ‘Did you ingest any recreational drugs to relieve your stress?’

He replied: ‘Very likely that I would have smoked some marijuana to calm myself.’

Ms Wass then said Depp had arrived at about 10pm and the rest of the party had finished dinner and were drinking magnums of wine.

Depp said: ‘I was in a low state in my mind, it wasn’t a pleasant thing I had just been through.’

Ms Wass asked: ‘Your account of this evening is that you went to bed after the guests had gone and you were reading… no conversation with Ms Heard?’

Depp replied: ‘Ms Heard was venting how upset she was that I was so late for her birthday dinner and that I had made a fool of her and that I didn’t care and everybody was talking about how awful it was of me to do such a thing and it ramped up and became aggressive… she was very, very angry.’

He added: ‘I was lying in bed after the birthday dinner, I got in the bed and started reading, trying to avoid any confrontation with Ms Heard.’

Ms Wass asked Depp if he was really reading a book on his ex-wife’s birthday when she had said she was upset he was late to her party.

He replied: ‘I thought her behaviour regarding the subject of my tardiness to her birthday dinner, I though that it was too much… her anger, her rage… when I had been texting Ms Heard, telling her ‘I am so sorry, I’m going to be late’.’

The actor then said he did not recall which book he was reading, or whether it was a book or one of his journals.

He added: ‘But the reason that I went straight to bed to start to read was because I was trying to avoid yet another confrontation with Ms Heard about something that didn’t go exactly as she had planned or expected.

August 4, 2020
Comments Off on The major changes coming to JobSeeker TODAY

Girl, 6, chokes on ‘FACE MASK she found inside her McDonald’s chicken nuggets’

August 5, 2020
Comments Off on Girl, 6, chokes on ‘FACE MASK she found inside her McDonald’s chicken nuggets’

Why you should never let a face mask DRY: Expert reveals how to get the most out of the product

July 19, 2020
Comments Off on Why you should never let a face mask DRY: Expert reveals how to get the most out of the product

July 15, 2020
Comments Off on Beauty experts reveal the TikTok hacks you should and should NOT be trying

July 17, 2020
Comments Off on Victoria stands down police staff over leaked photos of AFL star Dean Laidley dressed as a woman

July 9, 2020
Comments Off on Downfall of a big-spending tycoon: Pramod Mittal faces bankruptcy

Volcanic island in the Pacific Ocean is experiencing a ‘growth spurt’

July 7, 2020
Comments Off on Volcanic island in the Pacific Ocean is experiencing a ‘growth spurt’

Judge says pervert who indecently assaulted boy, 12, at Sydney public toilet is not a threat

July 8, 2020
Comments Off on Judge says pervert who indecently assaulted boy, 12, at Sydney public toilet is not a threat

The Goldbergs’ Bryan Callen is accused of sexual assault

July 31, 2020
Comments Off on The Goldbergs’ Bryan Callen is accused of sexual assault

July 14, 2020
Comments Off on The three jobs that WILL get you hired in the coronavirus era – and some of them pay VERY well
World map based on Google data illustrates where nationalities most want to go on holiday in 2021
US coronavirus cases hit a record single-day high for the third day in a row with 63,000