Victoria’s top doctor has angrily jumped to the defence of contact tracers as the state battles to contain a coronavirus outbreak from spreading.

The state will be plunged into a seven day ‘circuit breaker’ from midnight Thursday in response to a growing cluster of the highly infectious Indian strain which has soared to 26 cases, after 11 new infections overnight.

It is the state’s fourth lockdown since the pandemic began in March 2020 and sparked a fiery press conference when announced by the Victorian government on Thursday.

The outbreak began when an Australian who returned from overseas, without the virus, contracted it in Adelaide‘s hotel quarantine – before testing negative and flying home to Melbourne on May 4.

Chief health officer Dr Brett Sutton uncharacteristically snapped after a journalist grilled him as to why the state was ‘getting contact tracing so wrong’.

The usually calm and composed top doctor, who has won legions of fans during the pandemic who gush over his every word on Facebook groups, delivered a fiery response.

Victoria’s chief health officer Professor Brett Sutton was forced to defend the work of contact workers on Thursday. Pictured are health workers at a testing clinic

‘It is an absurd proposition that contact tracing has gone wrong,’ Professor Sutton said.

‘We have talked about exactly what the contact tracing team have done here and it is extraordinary.’

‘Contact tracing is an integral part of how to get control. It does not do magic.’

Do you blame the Andrews Government or Morrison Government for Victoria’s latest Covid outbreak and lockdown?

‘When an individual is not infectious and happens to have breached out of hotel quarantine and they are in the community, if they are not infectious, there is nothing to respond to.’

‘I think I’ve been pretty calm over the last 16 months and I hope I’ve always been respectful. But I will get fired up when contact tracers are attacked.

‘They do extraordinary work and do it brilliantly. 10,000 contacts found! The false narrative hurts real people, mentally,’ he tweeted.

‘Now is not the time to try to find an imaginary scapegoat. It’s the time to support Victorians going through another really tough time. We know what to do now and we’ll do it like no other. You’ve gotta love Victorians for how we support each other.’ 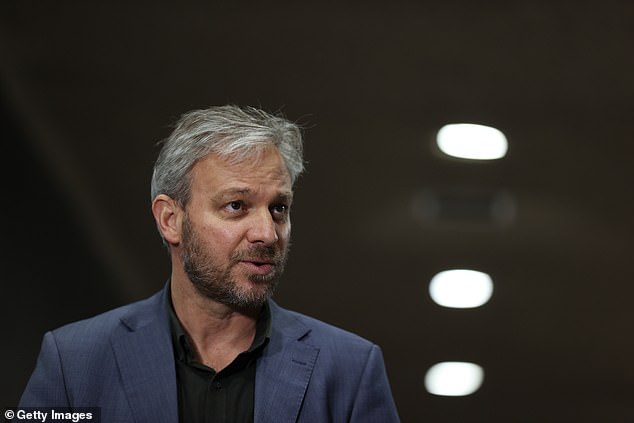 Opinion was divided over Professor Sutton’s defence of contact tracers.

Many Victorians took the opportunity to give Professor Sutton and contact tracers their support.

‘We’re with you Brett, I’m so proud of the way you handled that this morning, that person should be ashamed of themselves. We got this, thank you for bearing this huge burden most of us understand it isn’t easy,’ one woman commented.

But others disagreed and used the recent example where contact tracers identified the wrong Woolworths store as an exposure site visited by an infected case.

Another added: ‘I did extraordinary work too before I lost my job due to Covid outbreaks in Victoria.. a key part of my work was attention to detail and double checking to make sure I had all information correct,’ one man commented. 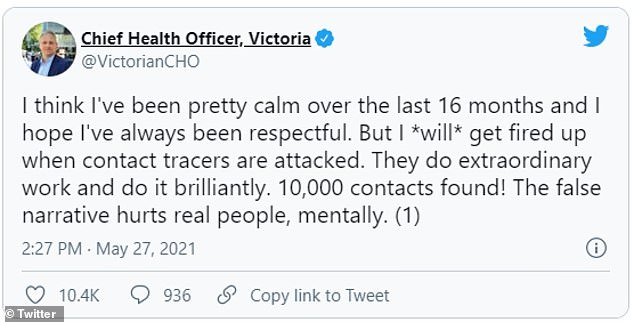 Other pointed to blame not at contract tracers but at government officials.

‘I don’t think it’s the CT’s fault, it’s the system run by your team. Oh, that’s right it’s just ‘bad luck’ that it got out of hand again… give Gladys (NSW Premier) a buzz please,’ one Victorian commented.

Another added: ‘It’s not on them, it’s your system, and your refusal to take any ownership of this outbreak locally is infuriating. The QR system your implementing now won’t fix the fact we’re not checking in to supermarkets and that would solve the Epping issue. Take ownership and fix it please

Professor Sutton wasn’t the only one to come under fire at Thursday’s press conference, where Acting Premier James Merlino also faced a fiery grilling from journalists who demanded answers. 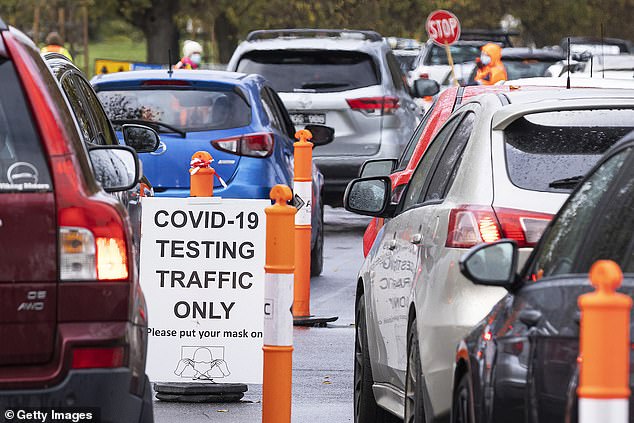 Mr Merlino responded by changing the subject – praising the work of contact tracers and taking a subtle swipe at South Australia.

‘We are continually proving how we respond to the pandemic and I go back to the work that our contact tracers have been doing with this particular outbreak that originated from a hotel quarantine breach in SA,’ Mr Merlino responded.

He also dodged the question of whether the state government took any responsibility for Victorians being hit with another lockdown.