A handful of surfers were brave enough to take on terrifying waves at a little-known Sydney break as Australia’s east coast was battered by damaging winds and monster swell for the third day in a row.

Huge open ocean swells of more than ten metres were seen slamming into the shallow rock ledge just metres away from the rocky shoreline. 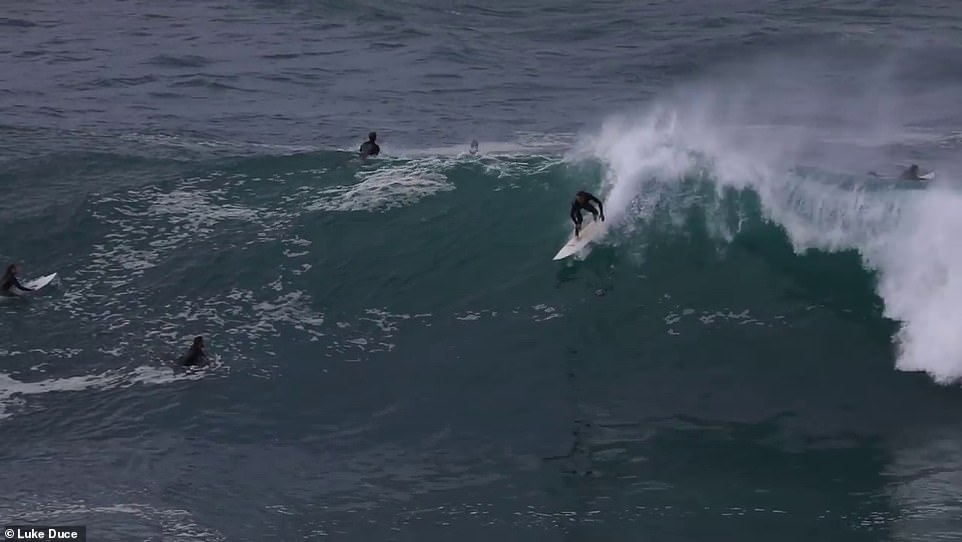 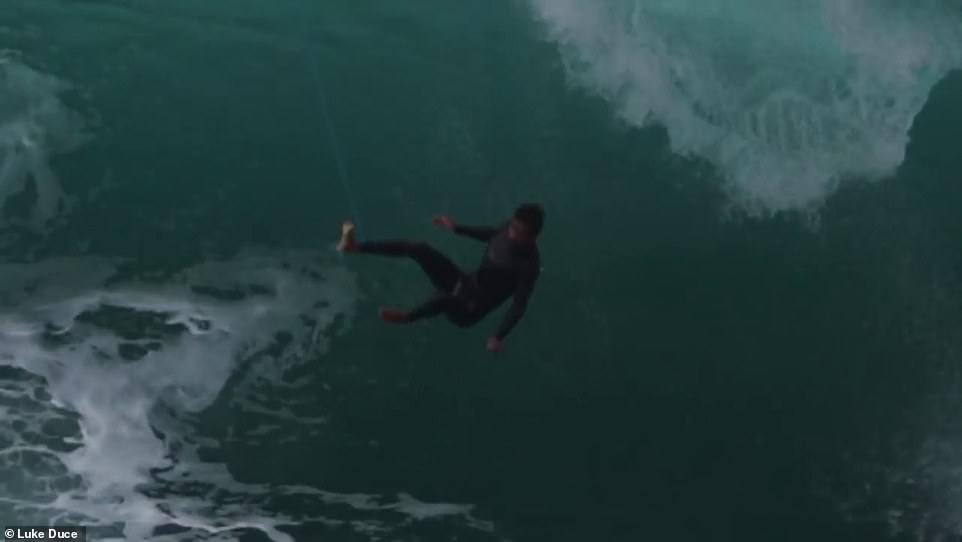 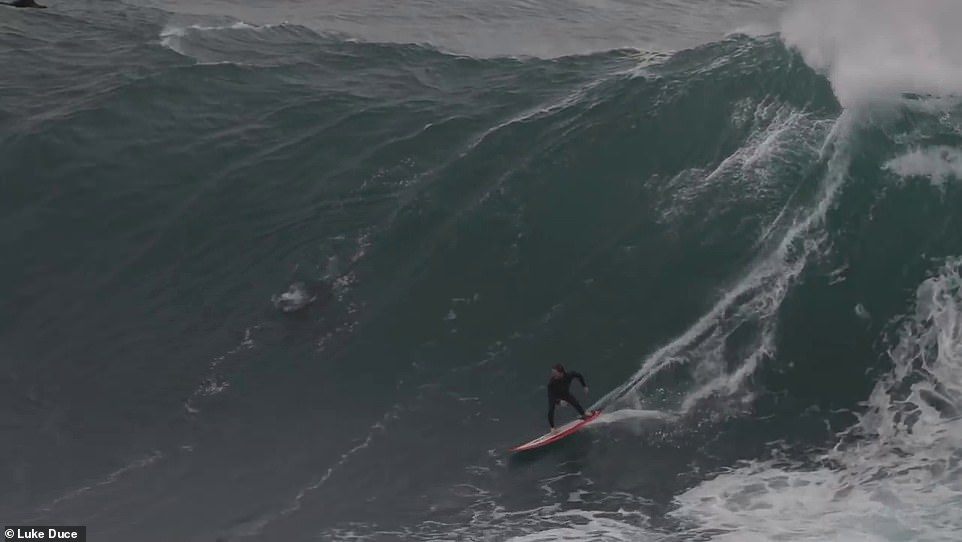 Mr Duce told Daily Mail Australia there was a massive crowd of people on the cliff watching as the surfers battled the waves.

‘It didn’t really look like Sydney to be honest,’ he said.

‘We get lots of big swells but this was a rare swell, we don’t get much of this. There were super, super brave surfers out there.

‘There were definitely some of the biggest waves I’ve ever seen ridden in Sydney.

‘I saw at least 15 surfboards get broken and surfers had to paddle all the way in because of their boards.’

The photographer described the swells as ‘super hectic’ and said there was a great ‘vibe on the cliff’ with lots of cheering and whistling.

‘Everyone in the water was the same – cheering each other on and making sure everyone was always safe,’ Mr Duce said. 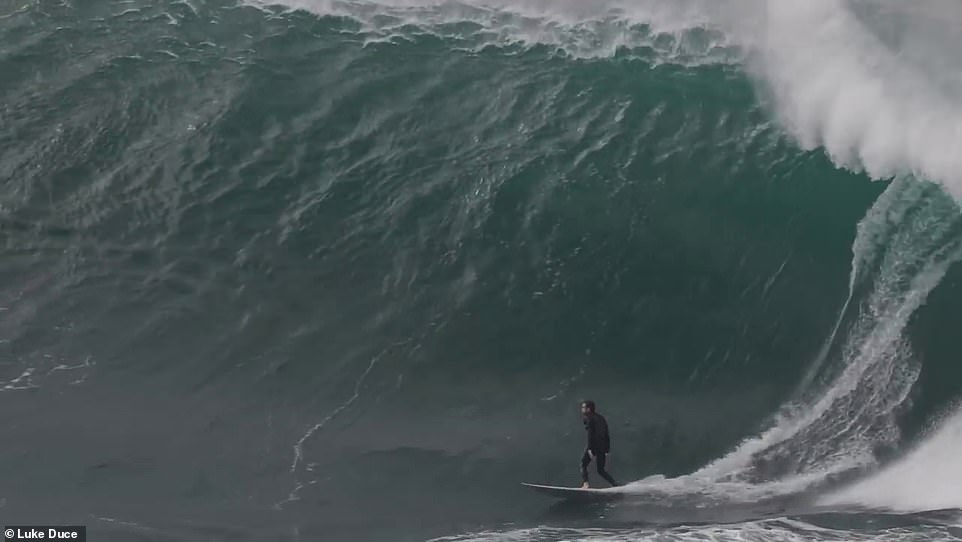 The brave board riders were filmed tackling the powerful surf conditions off Shelly Headland, south of Manly Beach 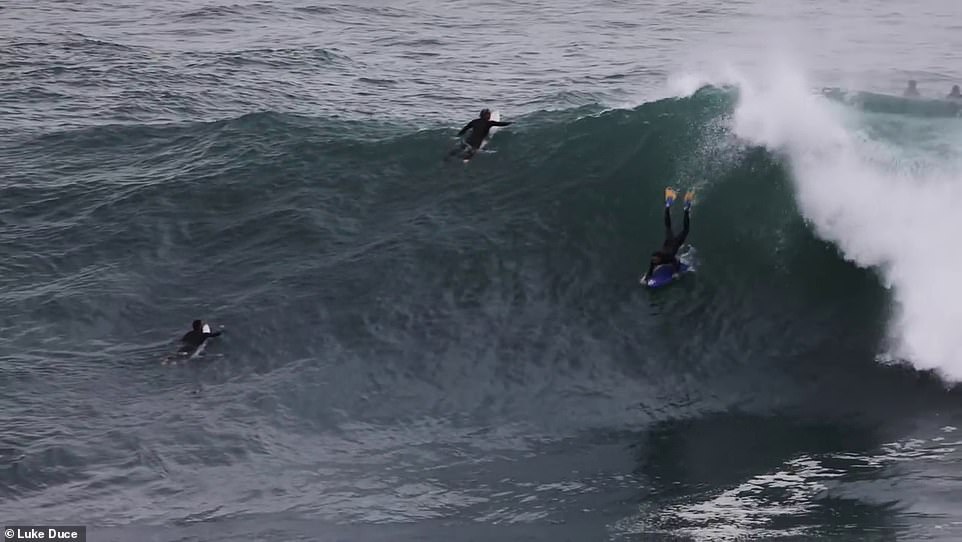 Avalon Beach filmmaker Spencer Frost described one of the waves as ‘hands down the best I’ve ever seen ridden in Sydney’ on his Instagram.

‘I’m not sure who the surfer is but he must be pretty damn stoked with this one,’ Mr Frost said, sharing three photographs of a surfer deep in a barrel twice the size of him.

‘I’ve been wanting to shoot this angle of this wave for a few years now – and today the stars finally aligned. Stoked to see everyone pushing it – what a wild day of waves,’ he added.

A large low pressure system dubbed the ‘Tasman Low’ was behind the wild surf conditions on Wednesday, with waves causing significant erosion along the coast.

‘The Tasman Low is making her exit quite dramatic,’ NSW Incident Alerts wrote on Facebook. 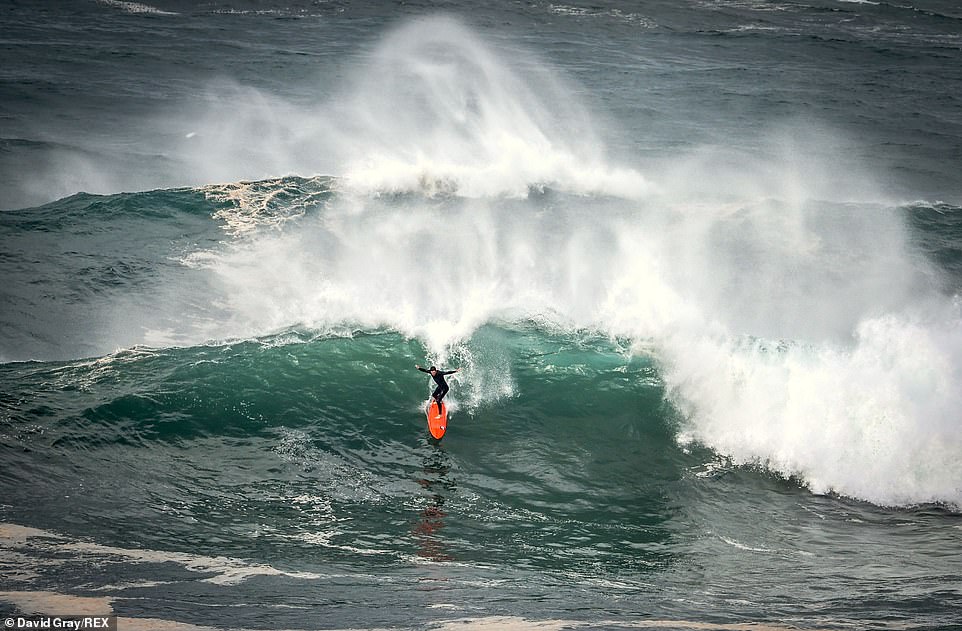 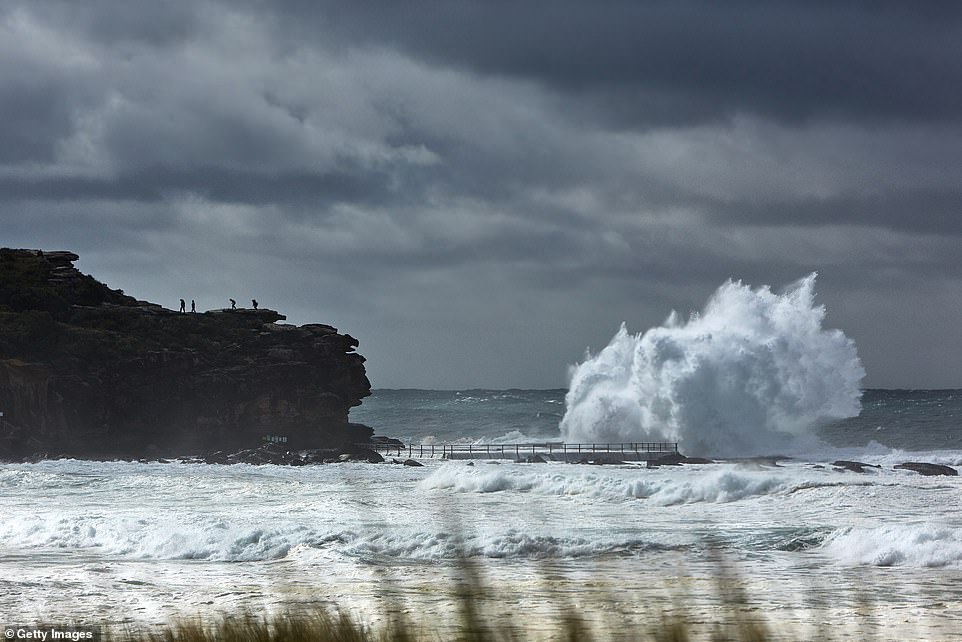 People are seen watching the large swell from atop North Curl Curl Headland, as a wave impacts and explodes below 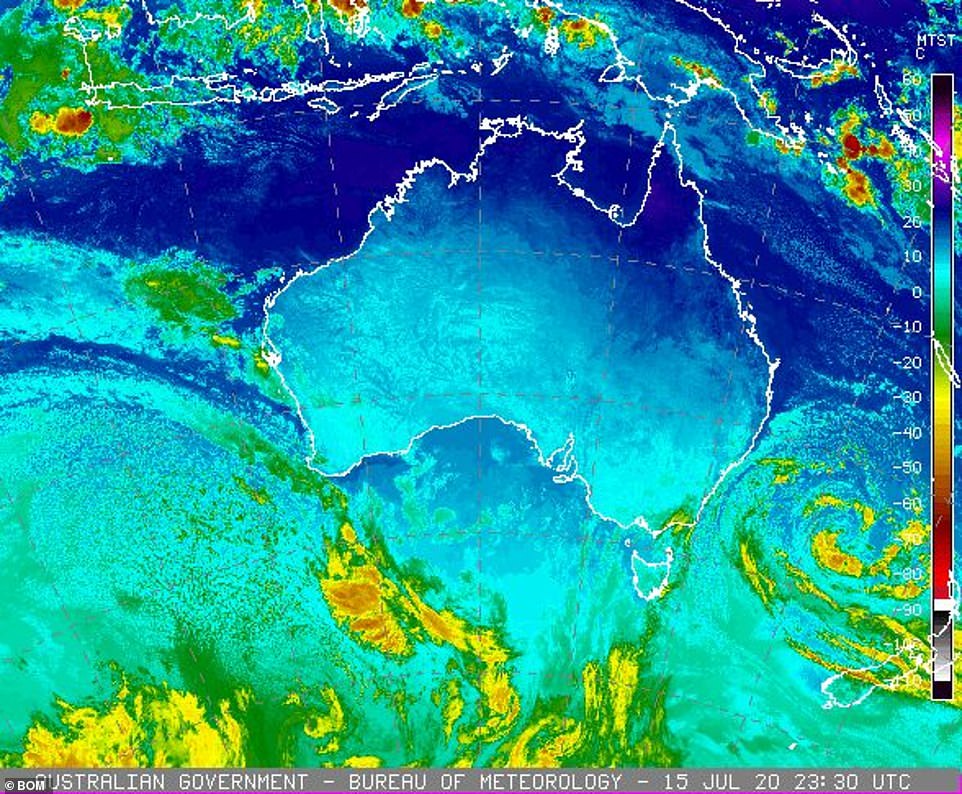 The low pressure system is seen off the coast of New South Wales, causing damaging surf and wind

A hazardous surf warning remains in place for Thursday and Friday from Byron Bay to Eden along the NSW Coast as huge swells and damaging winds batter Australia’s eastern seaboard.

A peak wave height off the Sydney coast overnight reached 11.6metres, with the NSW police marine area command advising people to stay out of the water and avoid surf-exposed areas.

Police have advised people planning to do coastal activities including rock fishing, boating, and swimming to reconsider. 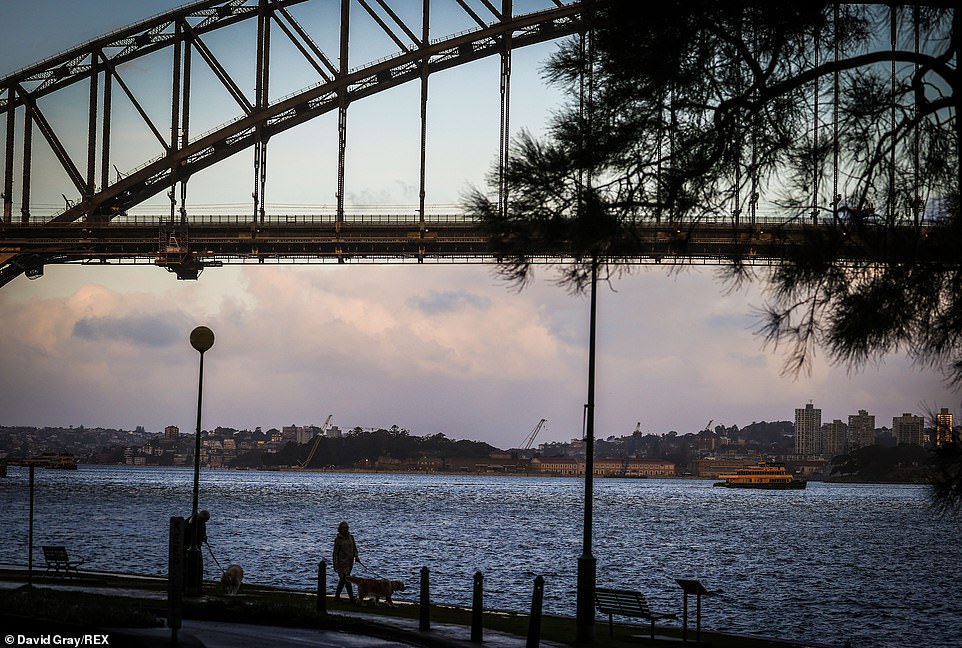 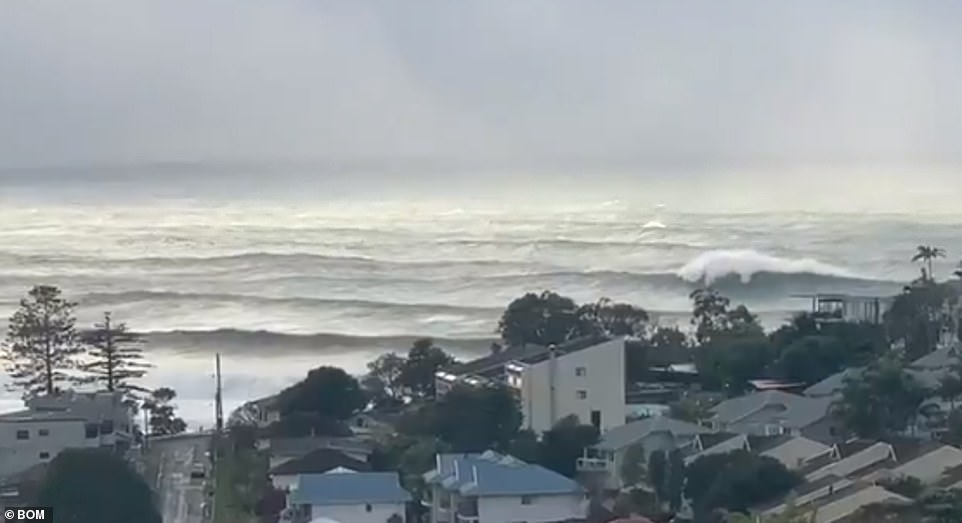 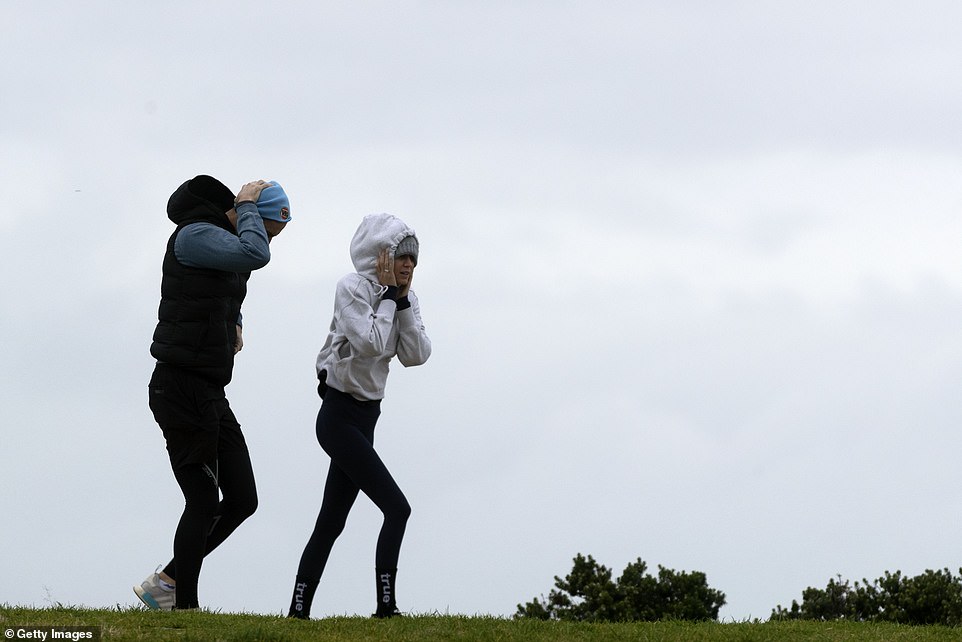 The hazardous south-east swell rolled into Australia’s east coast on Tuesday and will begin to ease into the weekend, with beach users told to remain wary of the waves.

‘A deep low pressure system is centred over the central Tasman Sea,’ the Bureau of Meteorology website reads.

‘This system is whipping up blustery winds and powerful waves along parts of the New South Wales coast, with conditions gradually easing later in the week as the low moves east towards New Zealand and a high pressure ridge moves over the state from the west.’

The weather bureau issued a separate warning about damaging and powerful wind gusts. 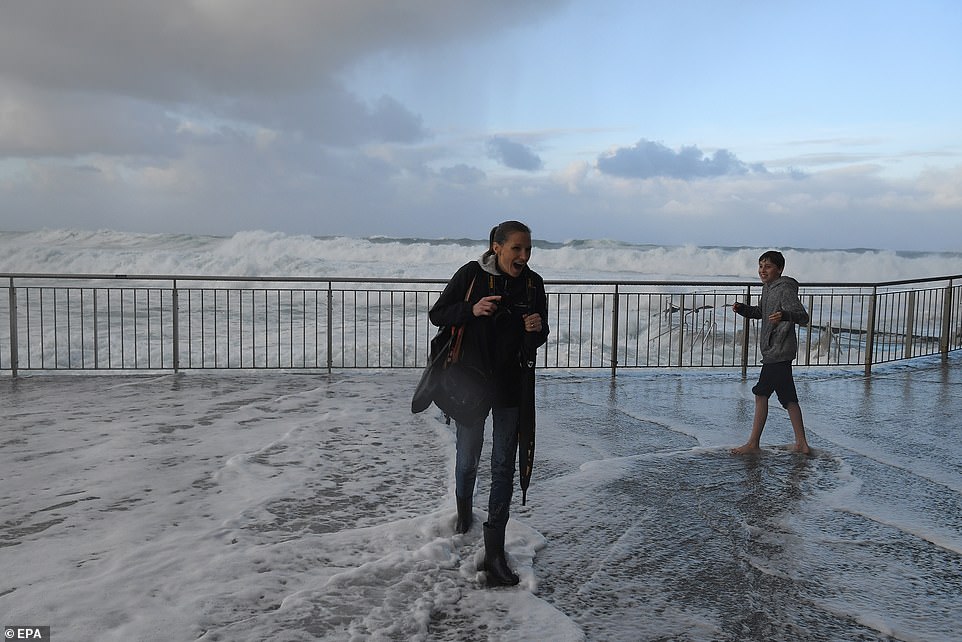 Swell rose up to 11.6m as an east coast low swept wild weather across the NSW coastline (pictured, large waves hit onlookers at Bronte pool in Sydney on Tuesday) 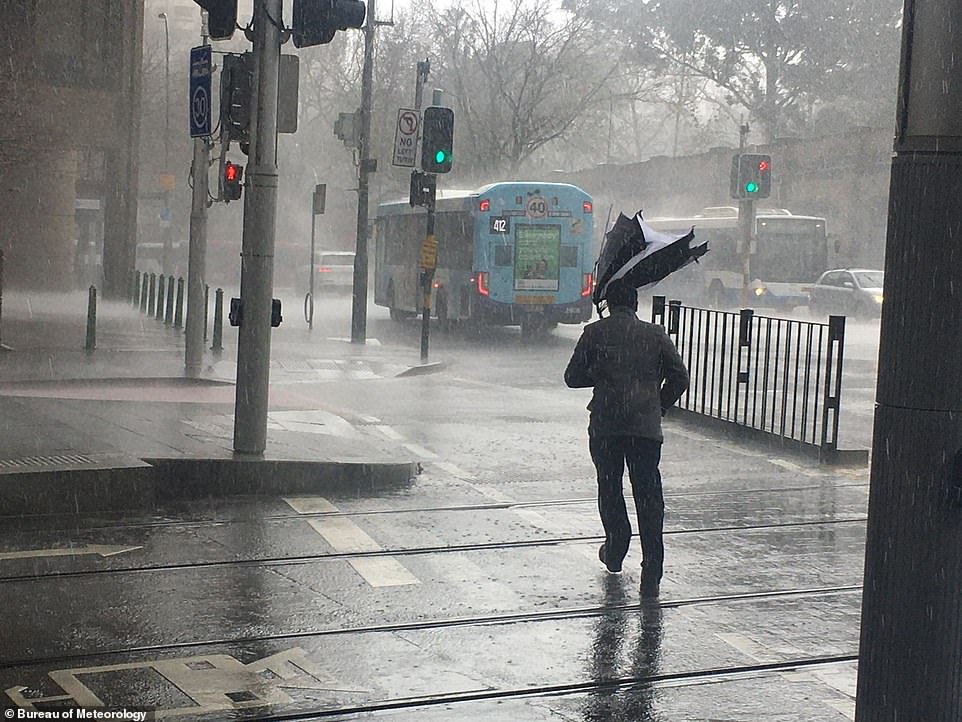 The chilly weather is set to barrel into the weekend, with a low pressure system and troughs sweeping strong winds, large waves and heavy showers across eastern NSW from Wednesday.

Sydney is forecast to be windy with some rain and a top of 17C and is unlikely to warm until Saturday, which would make this the longest spell below 18C in several years.

The Harbour City will dry up over the weekend, remaining partly cloudy, with a low of 8C and high of 20C on Sunday.

Canberra woke to frost on Thursday morning with a low of 1C, slowly climbing to the low-teens.

Queensland remains sunny but a hazardous surf and swell warning is in place and people are urged not to do any coastal activities including are rock fishing, boating, and swimming. 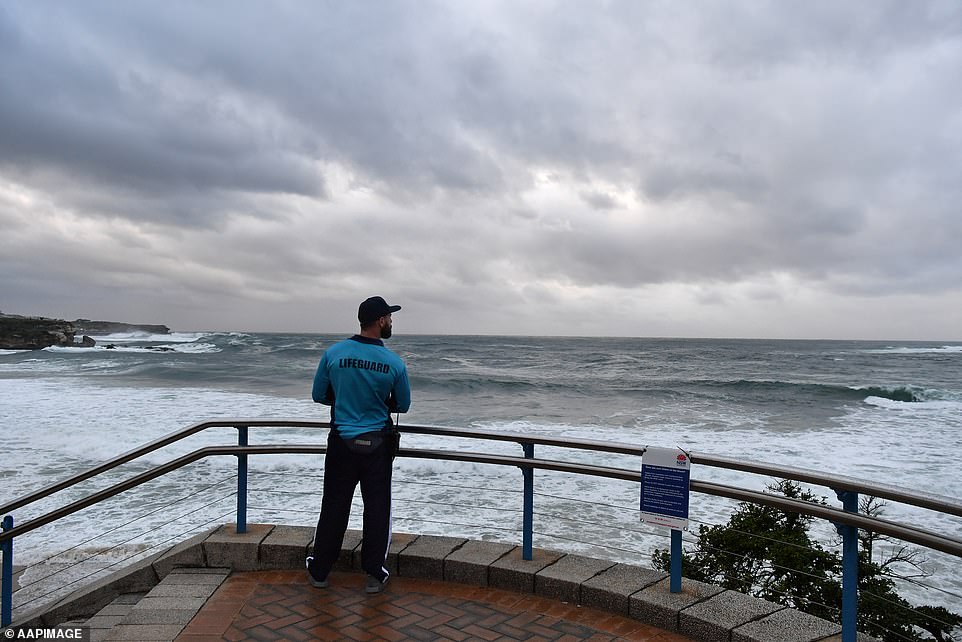 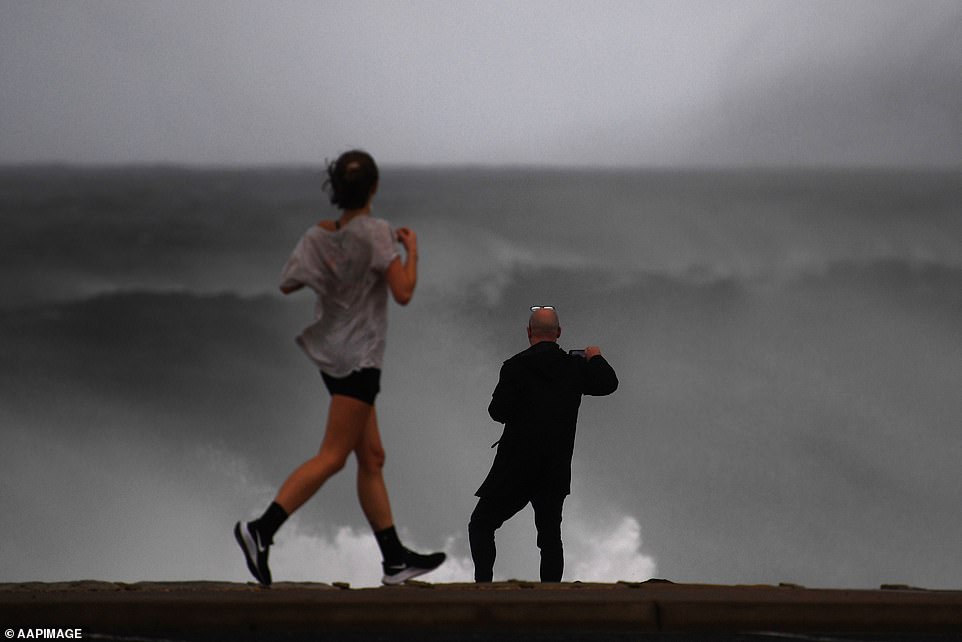 The surf warning is in place Thursday and Friday for Fraser Island Coast, Sunshine Coast Waters and Gold Coast Waters.

Surf Live Saving Queensland is urging people to stay out of the water and avoid walking near surf-exposed areas.

Brisbane is going to be mostly sunny on Thursday with a temperature high of 22C.

In Western Australia, a strong cold front is blowing blistery winds and showers across the state’s southwest.

Perth will be experiencing showers with a possible storm and highs of 21C. 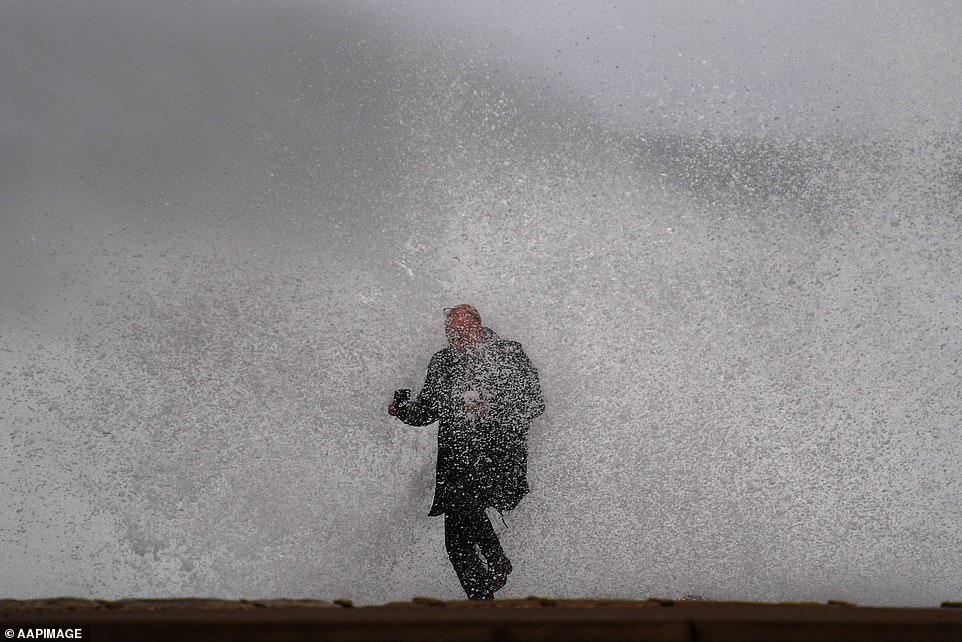 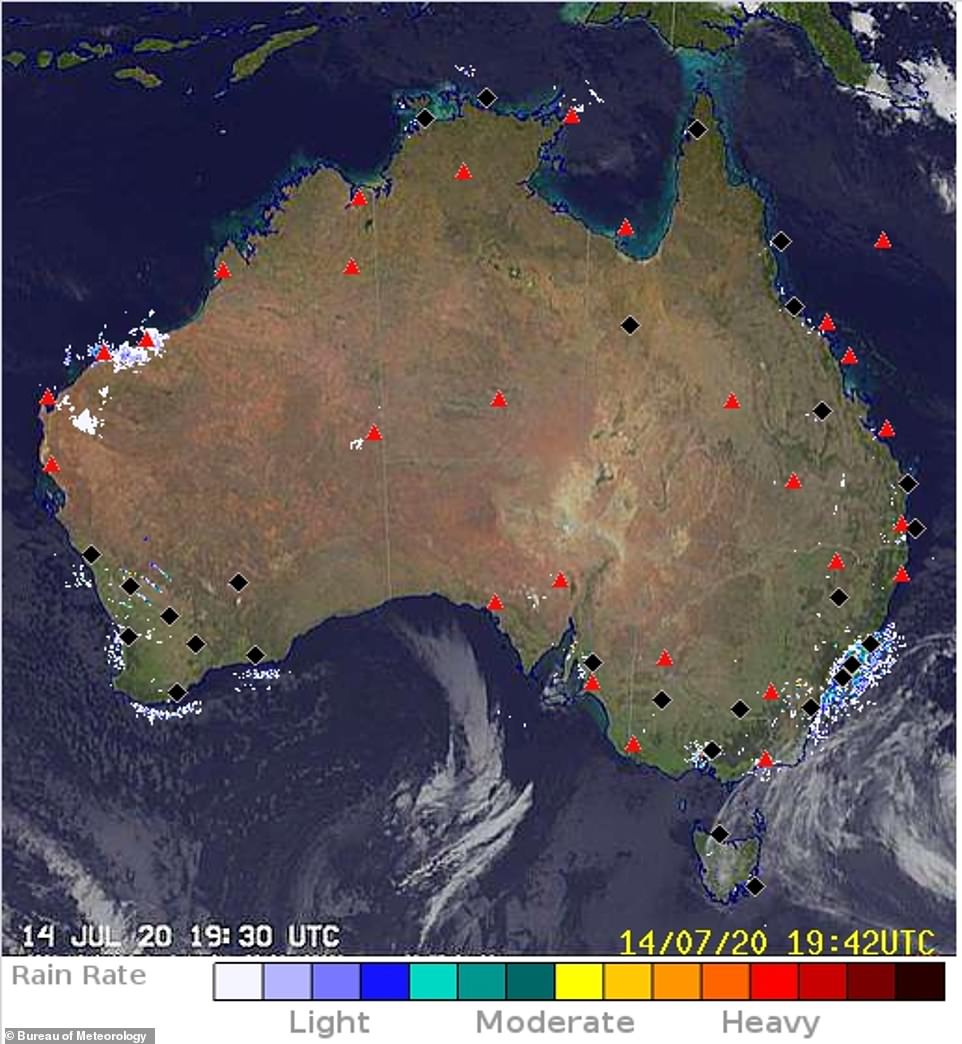 Melbourne woke to fog on Thursday morning, slowly clearing throughout the day with a top of 12C.

It will remain chilly and cloudy heading into the weekend with the mercury dipping to 5C and only topping a moderately cool 15C.

Showers will increase from Sunday, leading into a wet start to next week.

The low and troughs will bring showers in eastern Victoria as well as alpine snow.

South Australia is seeing mostly sun on Thursday with a frost warning also in place for the Mid North, Riverland, Murraylands, Upper South East and Lower South East forecast districts, with temperatures down to -1 degree are forecast.

Adelaide will remain sunny and see top temperatures of 16C.

Hobart will also shiver through cool conditions, dropping to 3C on Friday and Saturday morning. The temperature won’t climb far- reaching a high 12C over the weekend, when showers are expected.

Ammonium nitrate was at the heart of the massive Beirut explosion

August 5, 2020
Comments Off on Ammonium nitrate was at the heart of the massive Beirut explosion

VW, BWM, Daimler: The Race to Beat Tesla at Its Own Game

Donald Trump suffered ‘child abuse’ at the hands of his father, his niece claims in book

July 7, 2020
Comments Off on Donald Trump suffered ‘child abuse’ at the hands of his father, his niece claims in book

Coronavirus Australia: Melbourne lockdown may be OVER six weeks

July 8, 2020
Comments Off on Coronavirus Australia: Melbourne lockdown may be OVER six weeks

July 7, 2020
Comments Off on Girl, 2, raped in coronavirus isolation ward in South Africa

August 7, 2020
Comments Off on Knifeman who killed Arsenal fan at Tube station faces life in jail

July 13, 2020
Comments Off on Man sets out to turn into ‘the most attractive version’ of himself

July 16, 2020
Comments Off on FIFO worker from the 80s pens VERY blunt message to young tradies

August 7, 2020
Comments Off on Scientist ‘was in a seriously disturbed mental state when he stabbed six teenagers in a park’