Delta Air Lines has banned passengers who heckled Utah Sen Mitt Romney and South Carolina Sen Lindsey Graham ahead of their flights last week and will be prohibiting all guns in checked baggage on flights to Washington, DC, until after President-elect Joe Biden‘s inauguration next week.

Romney, the lone Republican senator to vote to oust President Donald Trump after he was impeached, was on a flight from Salt Lake City to DC when he was first harassed by a Trump supporter while waiting on his flight.

A second video showed dozens of people on a flight yelling ‘traitor’ at Romney, though he isn’t seen in that clip.

On Friday, Graham was preparing to leave DC when Trump supporters confronted him at the Reagan International Airport and also called him a ‘traitor to the country’.

Delta Air Lines CEO Ed Bastian said that the company has now placed 880 people on its no-fly list for not complying with its mask requirements and others were banned from flying with the airline for harassing passengers or unruly behavior related to the US election results. 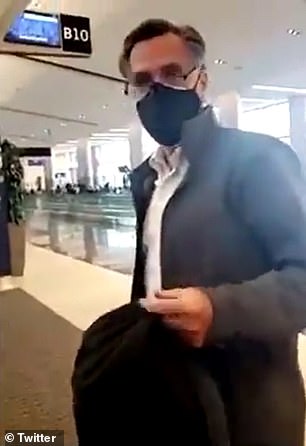 Delta Air Lines has banned 880 passengers who heckled Utah Sen Mitt Romney and South Carolina Sen Lindsey Graham ahead of their flights last week. A woman approached Romney (left and right) while he was waiting on a flight from Salt Lake City to Washington, DC

In addition, Bastian said starting this weekend the airline will prohibit passengers from traveling to DC with firearms.

‘We’re all on high alert based on the events over the last couple of weeks up in Washington,’ Bastian told CNBC Thursday morning.

Law enforcement officials will be exempt from the ban.

Bastian also said other security measures will be put in place at the airports and on planes ‘as we look to the week ahead’.

Earlier last week, Romney was heckled and taunted by Trump supporters ahead of the ‘Save America’ rally.

‘Let him know what we think,’ a woman is heard screaming in a viral video of the incident, before a group of Trump supporters with their masks pulled down chant ‘traitor’ and ‘traitor Mitt’ from their seats.

Romney is believed to be sitting further ahead in the plane, but he cannot be seen as the Trump fans record the incident.

Trump supporters traveling on a plane from Texas to DC caused chaos as flight attendants struggled to grapple control of the plane, amid chants, cheering and arguments.

At one stage in video of the incident, someone on the plane displays a ‘Trump 2020’ projection before the lights in the cockpit are turned on.

Meanwhile, people are heard yelling at each other, with one saying: ‘Shut the hell up!’

Others are heard claiming that someone on the flight ‘threatened’ them but it’s unclear what happened.

The next day Americans watched as dozens of MAGA supporters stormed the Capitol in a shocking incident that killed five people, including a Capitol Police officer.

Sen Graham was in Reagan Airport near DC when he had a run-in with a number of vocal Trump supporters last Friday.

The Trump loyalists confronted Graham after he backed down from his pledge to contest the Electoral College certification on Wednesday under the debunked assertion that many thousands of votes were fraudulent.

The video picks up with someone yelling ‘you traitor’ at Graham as he’s surrounded by police officers walking down a corridor of the airport.

Graham seems to say something to the person yelling, but it’s inaudible.

‘You garbage human being,’ someone yells. ‘It’s gonna be like this forever wherever you go for the rest of your life.’ 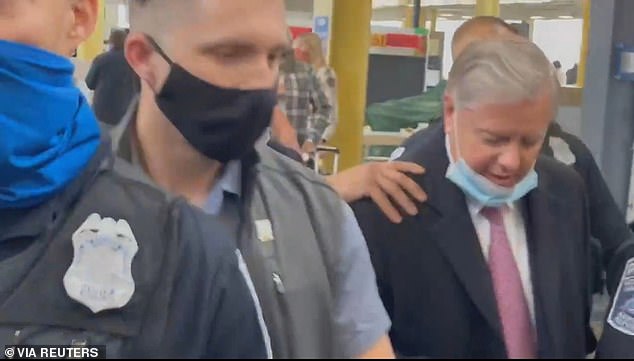 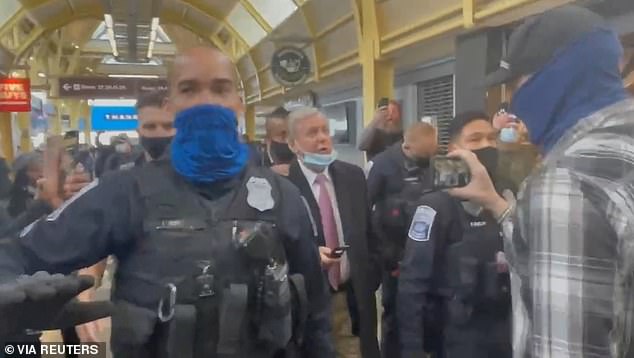 People start chanting ‘Audit the Vote’ and ‘Audit Our Vote’ before someone yells ‘you son of a b**ch’ at Graham.

On Tuesday, Senate Democratic leader Chuck Schumer said Trump supporters who breached the US Capitol should be banned from flying and added to a government ‘no-fly’ list.

And on Wednesday, the Federal Aviation Administration (FAA) announced that it will be implementing a new ‘zero tolerance’ policy on unruly airline passengers following the string of incidents involving Trump supporters.

FAA chief Steve Dickson signed an order directing the agency to harshly sanction any passenger who is disruptive on a flight or who fails to follow the instructions of airline staff.

The number of passengers banned from US airlines is now in excess of 2,700, with dozens of those bans having having been handed out in the eight days since the January 6 riot.

Dickson said any passenger found to be in breach of the new order could face fines of up to $35,000 and possible jail time.

The chief emphasized the FAA will not issue any warning letters or negotiate penalties.

‘We will no longer adjudicate certain of these unruly passenger cases with counseling or warnings. We’re going to go straight to enforcement,’ Dickson affirmed.

‘We’ve seen a disturbing increase in these incidents…. We’ll take the strongest possible enforcement action against any passenger who engages in it.’

Dickson said the agency’s special ‘zero tolerance’ program will be in place until at least March 30.

He added the FAA may in some cases refer incidents for criminal prosecution to the Justice Department, which could seek sentences of up to 20 years for flight disturbances.