Europe passed the grim milestone of 250,000 deaths from COVID-19 on Sunday amid a 44 per cent increase in cases last week.

Night-time curfews on millions came into force in France this weekend as Switzerland required all its citizens to wear masks in indoor public places.

But Israel has managed to flatten its outbreak through draconian measures including a ban on travelling more than a kilometre from home.

The government lifted that restriction on Sunday and reopened kindergartens, beaches and national parks.

Israeli mother, Talia Zinkin, said she was initially unsure whether to send her son back to day-care. “But I felt he would enjoy being with other children,” she told AFP. “We have to try to live normally.”

Likewise, Melbourne has managed to control its upsurge in cases and officials were able to allow the city’s five million inhabitants to leave their homes for more than two hours a day for the first time in three months.

While people will be allowed to travel up to 25 kilometres from home if they have valid reasons, restaurants and other businesses in Melbourne will remain closed.

These few signs of local success in lowering transmission of the virus bucked the global trend, with cases soaring beyond levels seen in the earlier this year. A man is undergoing a corona test on September 22, 2020 in Utrecht, Netherlands.

Europe’s death toll makes it the second hardest-hit region after Latin America and the Caribbean, where fatalities have surpassed 350,000.

The United Kingdom remains Europe’s worst-affected country in terms of deaths, accounting for almost one-fifth of fatalities on the continent.

The British government continues to struggle to combat the virus, with local officials resisting attempts by ministers to impose restrictions by region.

France, which counted more than 32,000 new cases on Saturday, has introduced a curfew from 9pm to 6am for at least a month in nine cities including Paris, affecting 20 million people.

At 10pm on Saturday, the streets of the City of Light were eerily empty apart from a few stragglers risking a $224 fine unless they can provide a certificate to show they have good reason to be out and about.

“I’m coming back from the hospital… where my daughter is being operated on. They gave me this proof,” one man tells a group of police officers, showing them a one-page document.

The measures fall short of the blanket confinements imposed in many countries earlier in the year, but raise fears of new, severe restrictions across the continent.

The Swiss government said on Sunday it would enforce mask-wearing in all indoor public spaces from Monday and forbid gatherings of more than 15 people, among other restrictions.

Some were not happy about the new rules, with several hundred people staging a demonstration outside the government’s Federal Palace in Bern.

Across the border in Italy, the government said it would earmark an additional $45 billion to tackle the coronavirus crisis and support its economy, the third-largest in the eurozone. 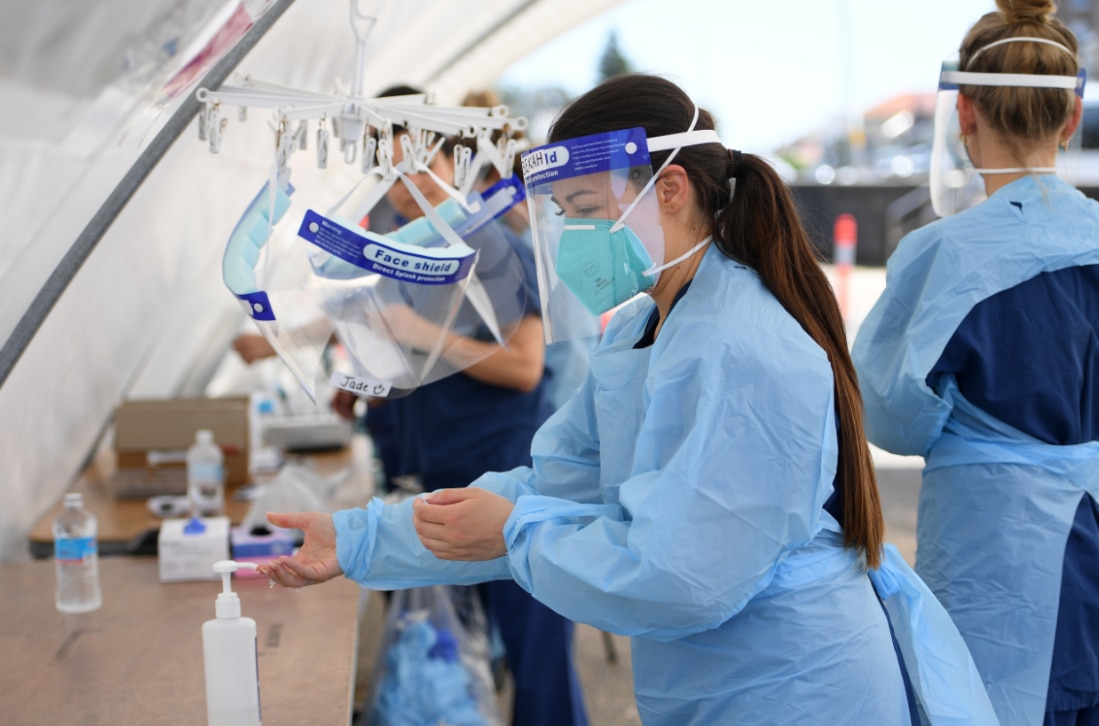 Nursing staff are seen at a coronavirus testing facility at Bondi Beach in Sydney, Thursday, October 15, 2020.

Governments are now mindful of declaring victory too early – Israel suffered one of the highest rates of infection in the world after quickly lifting an earlier lockdown.

Meanwhile, a new study in Japan has found that the coronavirus remains active on human skin for nine hours.

In comparison, the pathogen that causes the flu survives on human skin for about 1.8 hours, according to the study published this month in the ‘Clinical Infectious Diseases journal’.

The research team tested skin collected from autopsy specimens, about one day after death.

They concluded that frequent hand washing is the best way to combat the pandemic.

“The longer survival of SARS-CoV-2 on the skin increases contact-transmission risk; however, hand hygiene can reduce this risk,” the study said.