Healthcare workers in Sydney’s southwest have potentially been exposed to COVID-19 after a woman was diagnosed with the deadly respiratory virus on Wednesday.

The woman in her 30s was in close contact with staff at Liverpool Hospital prior to her diagnosis.

The woman was the only case not from a returned traveller currently undertaking mandatory hotel quarantine. 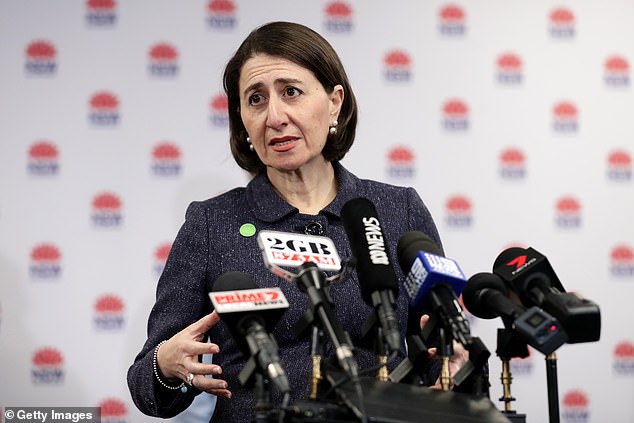 A Melbourne teenager on holiday with his family in Merimbula, south-east New South Wales has tested positive for coronavirus – as Premier Gladys Berejiklian considers sealing off border towns

Authorities are particularly concerned about whether it’s a historical infection or a more recent one, Ms Chant explained.

Another case which was identified in New South Wales was a 17-year-old from Victoria.

The teenager and his family were holidaying in the coastal town of Merimbula.

They were not from a hotspot in Victoria, and the boy had returned a negative result prior to travelling.

Once the family arrived in New South Wales, they received a call to say the negative result was false and that he did indeed have the virus.

They are all now in isolation, but had visited  the Tathra Hotel prior to the diagnosis.

Ms Chant praised the venue for its hygiene practices and said the risk of infection for the other 80 patrons was ‘very low’.

Residents living in towns near the Victorian border have been warned not to travel to other parts of the state, with the premier flagging further action may be needed to isolate those communities. 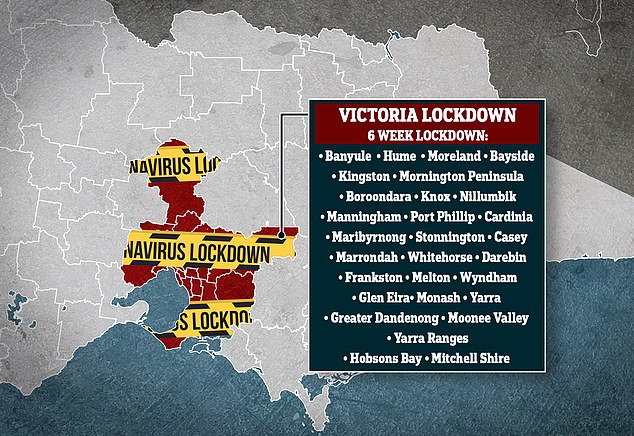 The whole of Melbourne and the Mitchell Shire north of the city will be placed back into lock down for six weeks from 11.59pm on Wednesday after Victoria recorded 191 new cases of coronavirus – its worst figure yet. Pictured: A map showing the suburbs in lockdown

Premier Gladys Berejiklian on Wednesday said more than 60,000 exemption permits were issued overnight for people living in border communities, allowing them to cross the border.

But the premier warned the widespread community transmission of COVID-19 in Victoria is a huge risk for NSW and urged residents in Albury and other border towns not to travel to other parts of the state.

‘The probability of contagion in NSW given what’s happened in Victoria is extremely high,’ she told reporters in Sydney.

‘The probability that we need to be tougher on broader restrictions is extremely high.

‘The government is considering what further action we take to make sure the bubble of these border communities is maintained.’

Ms Berejiklian also flagged some COVID-19 health orders relating to gatherings will be tweaked in the coming days, but that it would be ‘nothing major’.

July 8, 2020
Comments Off on AFL star’s heartache over moving from Melbourne to coronavirus hub and leaving his wife and daughter

August 2, 2020
Comments Off on Family tragedy of the Bognor Regis teenager charged over Twitter hack

July 31, 2020
Comments Off on Radio host whose two husbands died reveals why she will not love again

August 7, 2020
Comments Off on Scientist ‘was in a seriously disturbed mental state when he stabbed six teenagers in a park’

August 3, 2020
Comments Off on ‘Anti-ageing’ enzyme ‘tweaked’ by scientists made roundworms live longer

August 9, 2020
Comments Off on Mum who lost her hair after giving birth reveals how she transformed her locks with JSHealth vitamin

August 8, 2020
Comments Off on New South Wales to be hit by huge weather system size of half the state

August 4, 2020
Comments Off on Kevin Hart joins celebrities sticking up for Ellen DeGeneres
Bride who fleeced bosses out of thousands to fund wedding avoids giving birth in jail
Words Daniel Andrews may live to regret: Premier accused of ‘blaming’ Victorian for Melbourne crisis