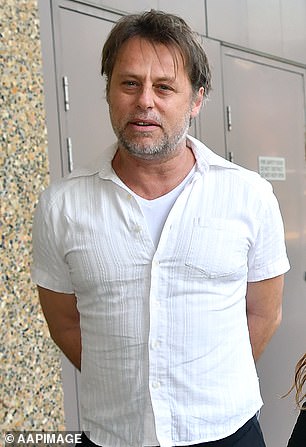 A Home and Away star accused of severely bashing a policewoman will be back on the streets after spending more than three months behind bars.

Joel McIlroy, who could face seven years in prison if convicted of assault, was granted $10,000 bail in the New South Wales Supreme Court on Monday.

The Silver Logie nominee is dying from the degenerative brain condition Huntington’s disease, which the court heard caused him poor impulse control.

The disease had already claimed the life of 46-year-old McIlroy’s father.

McIlroy allegedly repeatedly punched a 29-year-old senior constable during a violent scuffle in Sydney’s inner-city in October, putting the officer in hospital.

The officer had suffered significant ‘physical and psychological damage’ and had been off work for the past five weeks, the court heard.

McIlroy was originally charged with two counts of assaulting police, one of resisting police and one of wilfully obstructing an officer in the execution of their duty.

He was then additionally charged with assaulting an officer occasioning actual bodily harm, an offence which carries a maximum penalty of seven years in jail.

McIlroy appeared via video link from prison on Monday, supported in the public gallery by his mother and her husband of almost 40 years. 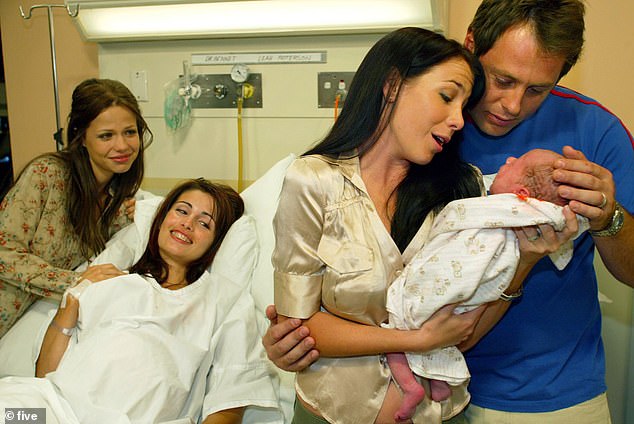 Joel McIlroy was granted bail in the NSW Supreme Court on Monday after telling a judge he would take medication for the degenerative brain condition Huntington’s disease. He is pictured far right with his one-time Home and Away screen wife played by Kate Ritchie 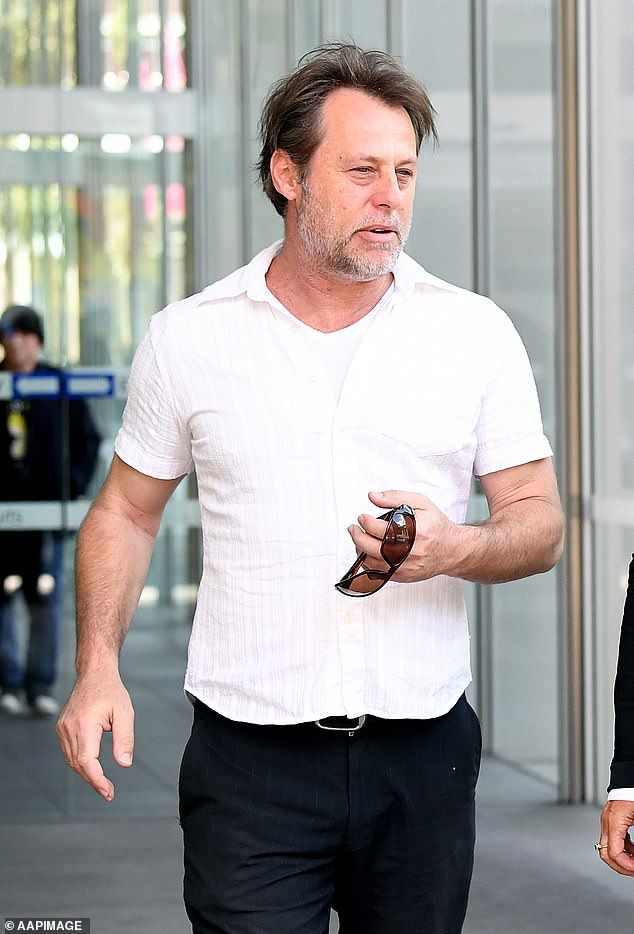 McIlroy could face up to seven years behind bars if convicted of assaulting a police officer. He told a judge he was still adjusting to having been diagnosed with Huntington’s disease

Central Local Court previously heard McIlroy ‘viciously’ shoulder-charged and punched the policewoman when he intervened in an arrest unrelated to him at Surry Hills on October 22.

The officer was only 164cm tall and weighed around 60kg, while McIlroy weighed 100kg and was almost 20cm taller.

The injured policewoman was taken by ambulance to St Vincent’s Hospital where she spent the night being treated for soft tissue damage including bruising and swelling to her shoulder, face and neck.

Police prosecutor Sergeant Liam Edwards told the court the officer would need ongoing physiotherapy after she suffered a dislodged vertebrae.

McIlroy appeared on Home and Away from 1994 to 2006, the year he was nominated for a Silver Logie as the most popular actor on Australian television.

On Monday the Supreme Court heard McIlroy, who also suffered from depression and was on Centrelink payments, had initially been reluctant to take medication after being diagnosed with Huntington’s disease in 2013.

Defence lawyer Peter O’Brien said his client’s symptoms would get worse with age but his poor impulse control could be contained. 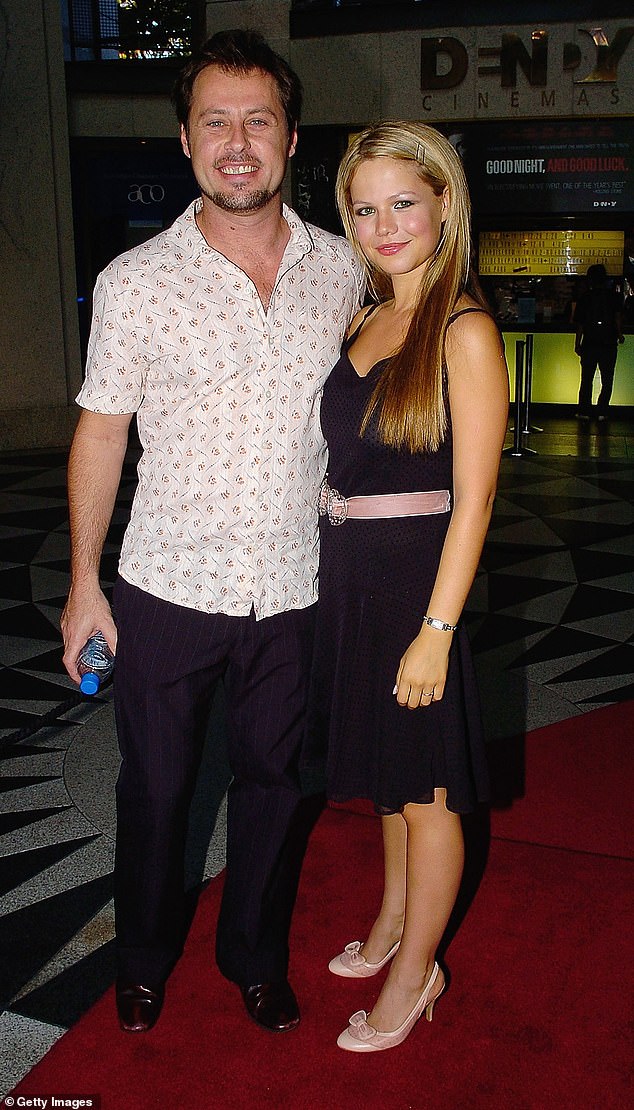 The policewoman allegedly assaulted by McIlroy will need physiotherapy for soft tissue damage and a dislodged vertebrae. McIlroy is pictured with singer and actress Tammin Sursok 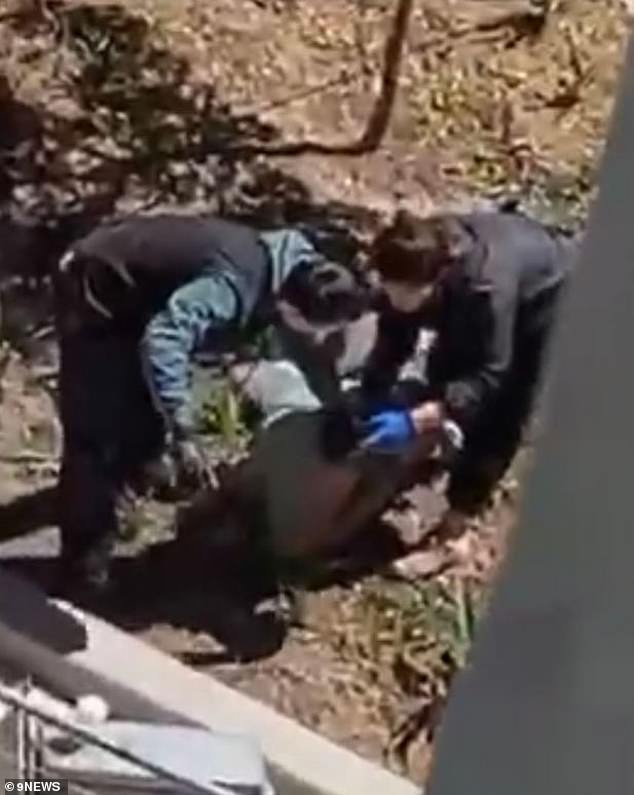 McIlroy is pictured being arrested by police after the scuffle in Surry Hills. He shouted ‘lies’ and ‘that’s incorrect’ as a prosecutor alleged he had tried to put a female officer in a headlock

McIlroy directly addressed Justice Peter Hamill, telling him he would be prepared to take appropriate medication and accept medical treatment.

‘I’m still in a bit of denial that I’ve got a disease, to be honest,’ McIlroy said.

‘I’m happy to take medication for the sake of the safety of the people of New South Wales. I don’t really have any anger towards the police.’

On the day of the alleged assault police from North Central Transport Action Group had a man under arrest for minor property offences.

McIlroy, who lives on Rutland Street where the incident occurred, allegedly approached two female officers about 11.15am but was told to leave.

He allegedly then shoulder-charged and punched one of the policewomen in the face several times as a struggle ensued.

McIlroy and the female officers fell to the ground. He was arrested with the help of a member of the public and taken to Surry Hills police station.

Video of McIlroy’s arrest allegedly showed him yelling during the struggle: ‘I can’t breathe’ and ‘get your hand off my face.’ 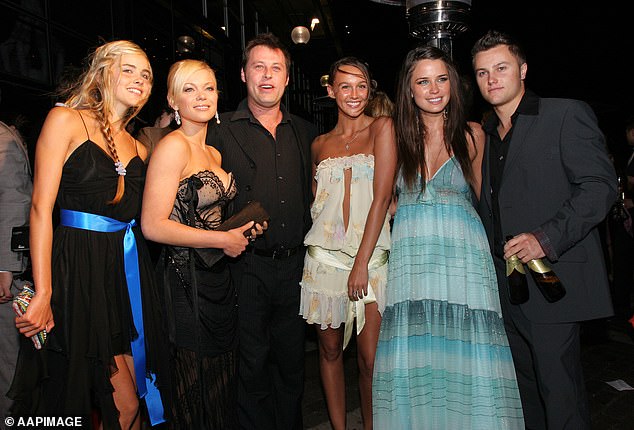 The police officer McIlroy is accused of assaulting was only 164cm tall and weighed around 60kg, while McIlroy weighed 100kg and was almost 20cm taller. McIlroy (third from left) is pictured with (L-R) Isabel Lucas, Holly Brisley, Sharni Vinson, Jodi Gordon and Mark Furze 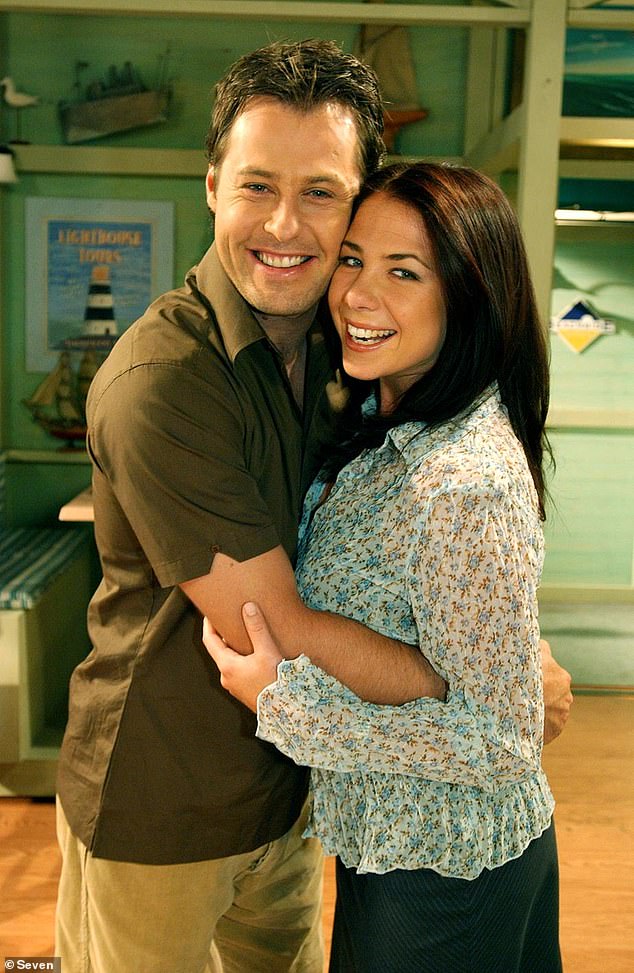 Home and Away actor Joel McIlroy, 46, allegedly punched a female senior constable multiple times as he intervened in the arrest of another man in Sydney’s Surry Hills on October 22. He is pictured with fellow star Kate Ritchie, who played his wife in the long-running television series

The Supreme Court heard McIlroy had been fined for a common assault in 2013 and the recent alleged attack was ‘violent, unconstrained, uncontrolled’.

‘The allegations are it took two police plus a random member of the community to restrain this applicant, then four officers to place him in the police vehicle,’ the Crown submitted.

‘This is someone who has… displayed a willingness and ability to engage in extreme physical behaviour.’

Mr O’Brien said his client did not realise the two female officers he confronted were police.

‘He thought they were not police officers,’ Mr O’Brien said. ‘He questioned them (about) being police.

‘It is not gratuitous violence. It is not violence encouraged under the influence of drugs or alcohol.’

McIlroy broke down in tears when he first appeared in court via video link in October when he was refused bail.

He yelled out ‘lies!’ and said ‘that’s incorrect’ when Sergeant Edwards accused him of trying to put the female officer into a headlock ‘for no reason whatsoever’.

Justice Hamill read several character references which portrayed McIlroy as a ‘decent, hardworking man’ before granting him $10,000 bail on conditions including that he lives at an address in Belmont, near Newcastle.

He must also agree to ongoing treatment and taking medication, report to police three times a week and not contact the two officers involved in the Surry Hills incident.

McIlroy, who also appeared in television series Water Rats, All Saints, and Heartbreak High, must surrender his passport, not go near international points of departure and remain in NSW.

He is due to appear in Central Local Court on February 18.

Huntington’s disease is caused by the inheritance of an altered gene.

The death of brain cells in certain areas of the brain results in a gradual loss of cognitive, physical and emotional function.

Huntington’s disease is a complex and severely debilitating disease, for which there is no cure.

The most common symptom is jerky movements of the arms and legs, known as ‘chorea’.

Chorea usually starts as mild twitching and gradually increases over the years.

A person with Huntington’s disease may also have difficulties with speech, swallowing and concentration.

Someone with Huntington’s disease may live for 15 to 25 years after developing the first symptoms.

Anthony LaPaglia denies claims he was ‘dumped’ at the Novotel

July 30, 2020
Comments Off on Anthony LaPaglia denies claims he was ‘dumped’ at the Novotel

July 31, 2020
Comments Off on Coronavirus Australia: Jetstar flights from $35 as travel resumes

August 2, 2020
Comments Off on Coronavirus: Pregnant Katy Perry ‘in lockdown’ in Sydney hotel

August 2, 2020
Comments Off on Infrared pictures taken from space of Australian bushfires