A horrified Woolworths shopper has shared how she discovered a soiled nappy in a home delivery order after noticing a peculiar pink bundle inside one of the packages.

The Melbourne woman was collecting her recent grocery order from outside and bringing it into her home when she noticed an usual bag.

While it was still a Woolworths bag, it was different to those the supermarket giant typically use for its home order.

After packing away all of her other goods, the 73-year-old opened up the odd bag and spotted an indistinguishable parcel nestled in the bottom.

But when she picked it up and noticed it was wet, she realised it was a soggy nappy.

‘I’ve never been so disgusted,’ she told 7News.

‘I told my husband and washed my hands immediately, I just couldn’t believe it. I was stunned and I was flabbergasted.’

The woman said she has been using the service for years, as she and her husband both have health ailments which make it difficult to shop in store.

Concerned by the disturbing find, she reached out to the supermarket over its Facebook page after efforts to contact the company via phone and the website proved fruitless.

‘Today I received my grocery order from Woolies online,’ she wrote.

‘I have never been so disgusted because as I opened the final bag, there was only one article in the bag. There it was sitting at the bottom, a – wait for it- a sopping wet NAPPY. Yes, a DIRTY NAPPY. 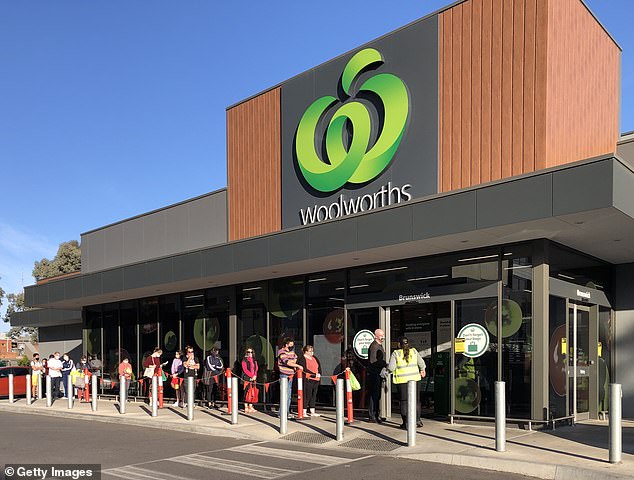 A Woolworths spokesperson said the supermarket is investigating the ‘concerning’ claim

‘I couldn’t believe what I was seeing.’

A Woolworths spokesperson told Daily Mail Australia the supermarket is investigating the incident.

‘This is a concerning claim and we’re keen to investigate it with our delivery partners,’ the spokesperson said.

‘We’ve been in contact with the customer to apologise and will be looking into this as a matter of urgency.’