For the better part of a century, members of the Church of Jesus Christ of Latter-day Saints have made their political home under the Republican Party’s tent, motivated by conservative beliefs rooted in the family values, personal liberty and economic frugality of their faith.

But some church members now find themselves in a political quandary: They’re still Republicans, but they no longer fit in with the party as exemplified by President Donald Trump, who for them represents a hard departure from the church’s teachings on sex, crude language, empathy and humility.

In Arizona — the only state up for grabs that has a significant Latter-day Saint population — a growing number are finding refuge in Joe Biden, the Democratic presidential nominee. Joe Biden, the Democratic presidential nominee, speaks during a campaign event at Carpenters Local Union 1912 in in Phoenix, Arizona, 8 October, 2020.

Most church members are still likely to support the president again this year. Still, exit polling from 2016 showed 56 per cent of church members supported Mr Trump, far less than the support he received from members of other faiths.

Even a small shift in Latter-day Saints’ voting patterns could have a large impact in Arizona. There are about 437,000 members of the faith in the state, though that number includes children; Mr Trump won by just 91,000 votes in 2016.

Despite their reservations about Mr Trump in 2016, members of the faith largely fell into familiar voting patterns, supporting Mr Trump or begrudgingly casting their votes for a third-party candidate.

But Mr Biden doesn’t cause the same reluctance among some Latter-day Saints as Hillary Clinton did. They like his temperament and personality, arguing that the warmth and empathy he displays much more closely mirrors the behaviors that the church demands of its followers than Mr Trump’s grating style. Christie Black, a member of the Church of Jesus Christ of Latter-day Saints and once staunch Republican who has now joined the Democrats.

Rob Taber, head of the LDS Democrats of America, has been courting Latter-day Saints for the Democratic Party since 2012, when Mitt Romney, perhaps the world’s most famous church member, was the Republican nominee.

He said his job had become considerably easier in recent years.

He said he understands how isolating it can be for church members who don’t support the Republican nominee, and he is trying to create “a home for the politically homeless” in the Biden campaign.

“We like to say, converts are welcome,” he said. “But this election, visitors are welcome.”

Although the current Supreme Court vacancy could have the potential to bring more Latter-day Saints home to the Republican Party, Matt Miles, a political scientist at Brigham Young University in Idaho, said that if it was filled before the election, as expected, members of the faith who were opposed to Mr Trump would have less incentive to jump back into his camp.

“Voters don’t reward politicians for things they’ve done in the past; they vote for things that are going to happen in the future,” he said. 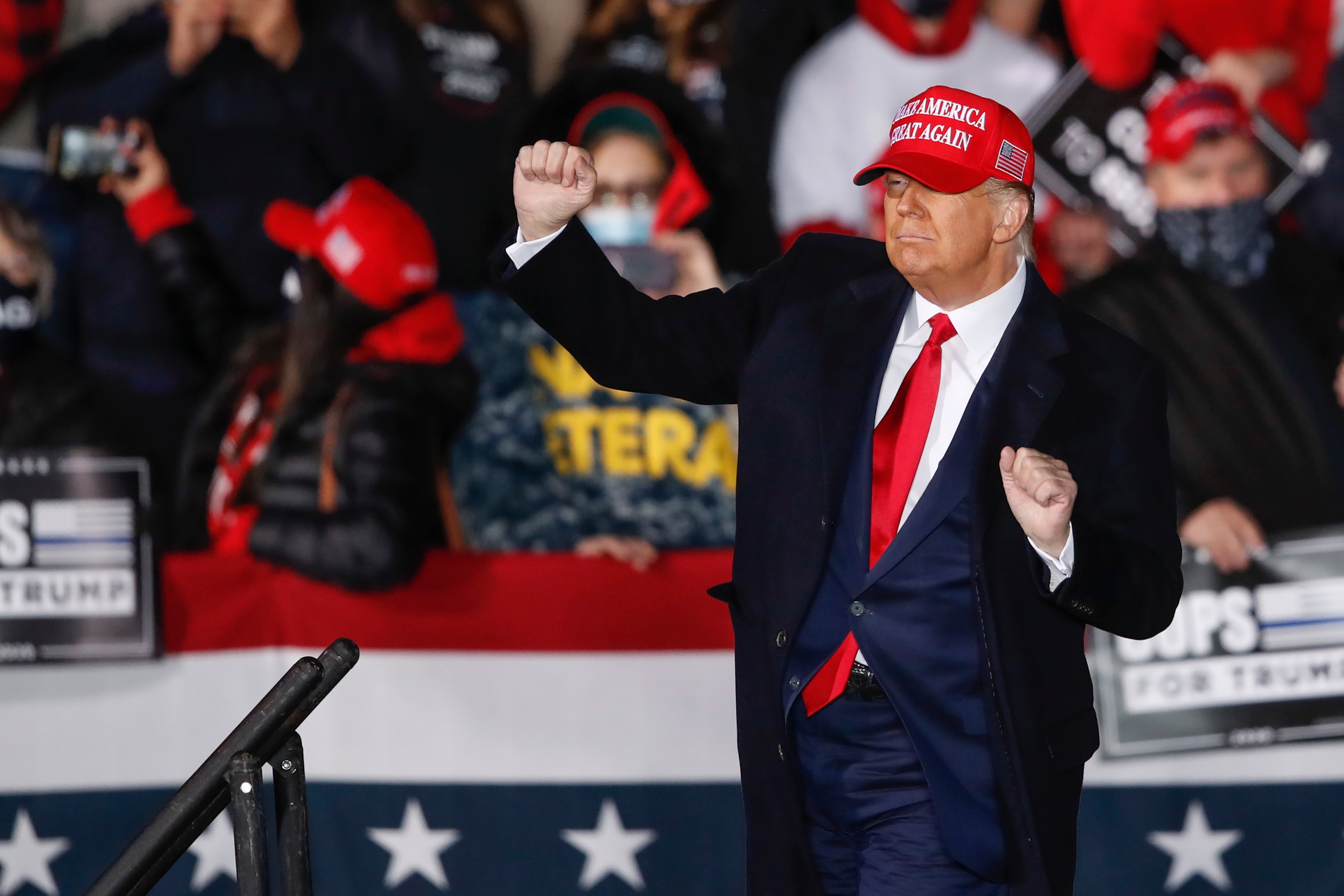 US President Donald Trump dances on stage after speaking at a campaign rally at the Southern Wisconsin Regional Airport in Janesville.

Kirk Adams, a church member who served as chief of staff to Governor Doug Ducey of Arizona, a Republican, and was the former speaker of the state’s House of Representatives, agreed that the motivation would diminish once Judge Amy Coney Barrett was confirmed. But he said that for now, having the Supreme Court nomination and the issue of abortion front and centre helped Republicans to make the race about more traditional conservative issues like abortion rather than just supporting Mr Trump.

Four years ago, Dan Barker, a retired state court of appeals judge and a Republican, couldn’t bring himself to support Mr Trump, who he said was not capable of the kind of moral leadership that he wanted in a president. For the same reason, he couldn’t support Ms Clinton. Instead, he wrote in Mr Romney on his ballot.

“This year is different for two reasons,” he said. “I have stronger feelings about what would happen to our country with four more years of our current president, and Joe Biden is not Hillary Clinton.”

The Latter-day Saints’ relationship with the federal government is complicated, and some members support Mr Trump precisely because he is shaking up the government.

“The institutional norms sort of seem to be dissolving, and there’s a group of Mormon Republicans that loves that; that’s exactly what they want,” Mr Miles, the BYU political scientist, said. “They would be happy to see the federal government not gone away, but really, really weak.”

There is a large group of Latter-day Saints whose members don’t like Mr Trump’s style, but they say his policies on abortion and conservative court appointments outweigh their personal distaste for him. For many of them, supporting the president’s reelection is an easy decision.

Justin Olson, an elected utility regulator and former state lawmaker who was invited to be part of the president’s Latter-day Saint coalition in Arizona, is solidly behind the president now, though he said he was initially hesitant to support Mr Trump four years ago.

He was suspicious that Mr Trump wasn’t a real conservative and wouldn’t follow through on the policies that he had espoused on the campaign trail. But the president has not disappointed him, Mr Olson said.

“The question comes down to a question of policy versus personality,” he said. “And to me, policy matters most because it’s going to impact our country for generations to come.”

The Church of Jesus Christ of Latter-day Saints diverges from the president on several policy fronts. It takes a more empathetic stance on immigration and refugees, positions informed by its global reach, legion of missionaries and the church’s own history as an unwelcome religious minority in the country.

When Mr Trump, as a candidate, called for a ban on Muslims entering the United States, the church took the unusual step of issuing a statement that said although it is neutral in regard to party politics and election campaigns, it “is not neutral in relation to religious freedom.”

More recently, the church reiterated that believers should volunteer their time, talents and friendship to refugees immigrating to the country.