Franklin, having played just one AFL game in the past 21 months, is set to tackle Adelaide at the SCG on Saturday.

The 34-year-old’s status as one of sport’s great entertainers, coupled with an incredibly long stint on the sidelines which has resulted in increased uncertainty over when Father Time will catch up with the father of two, has triggered excitement and obvious headlines. 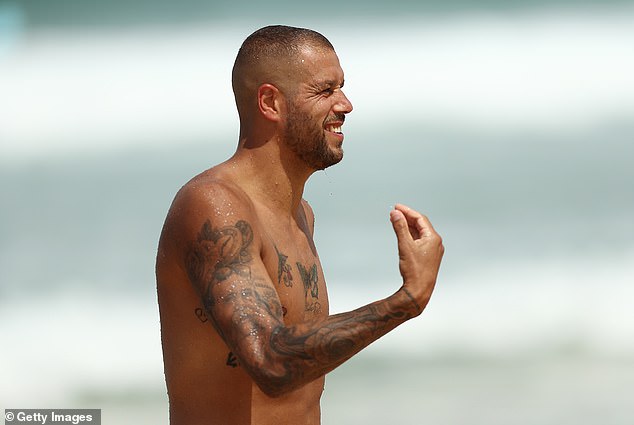 Comeback: Sydney superstar Lance Franklin has attacked his 581-day wait to return with energy, empathy and trademark competitiveness. Pictured on March 8, 2021, in Sydney

Those playing ‘Buddy bingo’ this week can already mark off mentions of his nine-year contract, buzz, prospects of playing beyond 2022, ongoing quest for a premiership since leaving Hawthorn, impact on crowds in the fickle sporting market, push for 1000 goals, unique kicking arc and the void he will leave upon his retirement.

The four-time Coleman medallist’s capacity to get tongues wagging and put bums on seats is arguably unparalleled in the AFL.

Yet there is a new added sense of the unknown about the notoriously shy showstopper, who emerges from a hiatus spanning longer than most sabbaticals with fresh questions over his longevity.

Few have followed Franklin’s struggles as closely as Swans coach John Longmire, who has fielded more questions about the iconic key forward than any other topic during recent years. 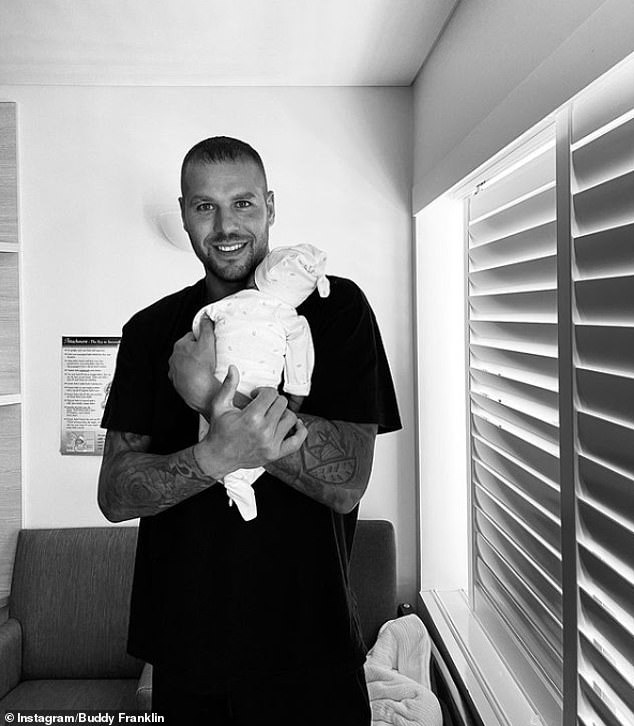 ‘Our baby boy has arrived’: Buddy recently became a father for the second time when his wife Jesinta welcomed a son

Longmire loved what he saw last year after Franklin gave up hope of getting on the park that season, yet opted to stay with teammates in a hub rather than return home.

‘He just has great empathy and care for a young forward group. He’s been like that since day one,’ Longmire told AAP.

‘He won’t sit there and just agree with everyone.

‘One of many things that Lance is good at is calling it as he sees it. You don’t get to that age and experience, and be that good a player, without confidence in being able to put your opinion across.

‘And he makes the young blokes feel comfortable. He’ll talk to them about what opposition defenders like and don’t like – if you’re Logan McDonald sitting in a forwards meeting and Lance is helping you, that’s always a positive.’ 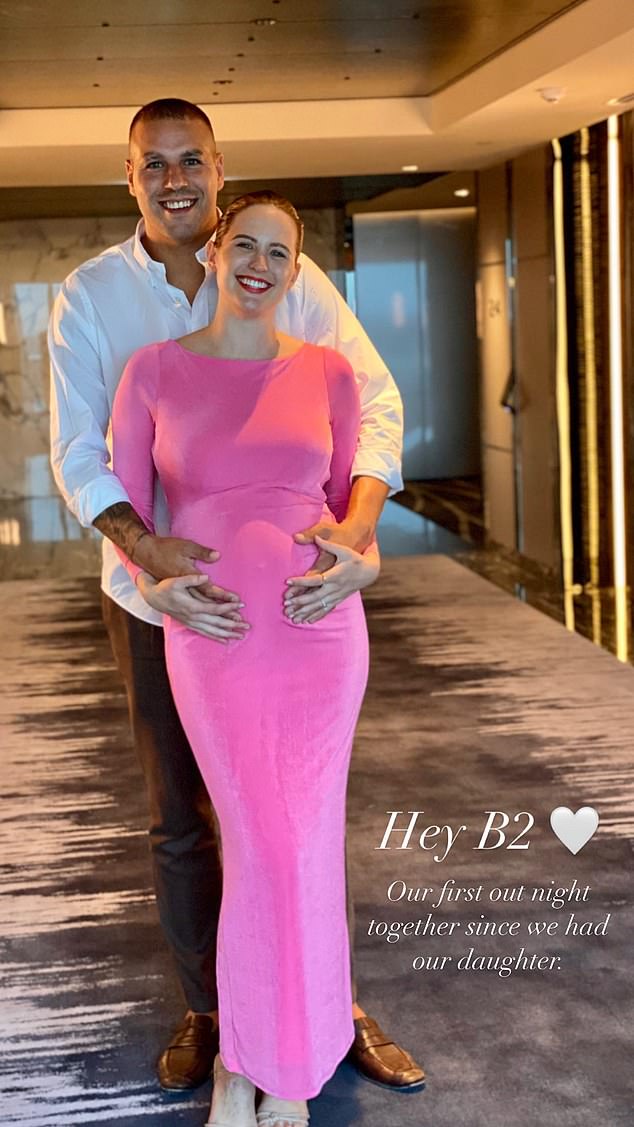 Family: The AFL star is pictured with his wife Jesinta

Longmire offers a Cheteshwar Pujara-like straight bat in response to commentary about Franklin’s $9-million contract, signed in 2013 and due to expire at the end of 2022.

‘It’s not relevant for me… I know what he does,’ the 2012 premiership coach said.

When pressed on whether the Swans may have opened rivals’ eyes to the upside of long-term deals, Longmire notes ‘one of the biggest issues in AFL footy is managing your salary cap’.

‘That’s a reality for a lot of clubs… it’s not just about security for one player over a long period of time,’ he said.

Franklin’s profile is immense but, hunted by paparazzi to a point where taking out the bins became both chore and clickbait, he is a private man in a public circumstance.

It is different at the SCG where young teammates Callum Mills and Nick Blakey praise Franklin’s mentorship and leadership as much as his monster goals and left boot.

Mills was particularly impressed by Franklin’s positivity in the hub, which belied a long-term injury.

‘He’s just so energetic around the group and such a great leader for any young player coming through in terms of hard work and what is required,’ he said.

Blakey senses that ‘everyone looks at him as Buddy the footy player … this competitive beast’.

‘But if you actually get to know him as a person and off the field, he just genuinely cares,’ he said.

Franklin’s competitive streak is nonetheless the stuff of legend and what has driven him to the point of greatness – Longmire’s go-to term to describe his gun forward is a ‘competitor’.

Ruckman Tom Hickey, having joined the Swans a tick over four months ago, has witnessed Franklin’s will to win as friend and foe in a range of settings.

‘You should see him when he’s playing ping pong,’ Hickey said.

‘He refuses to go off the table.

‘He’s a ripping guy. I consider myself lucky that I get to run out with him… I hated playing against him, you always knew that at any moment he could just turn it on.’

It was the unbridled joy of Isaac Heeney, asked earlier this week what No.23 will bring to his team, that perhaps best reflected the sentiment of bedazzled AFL fans (red and white or otherwise) that plan on tuning in or turning up.

‘There’s something about Buddy.’