Inside the land of the free: The good people of Geelong are living the good life

Inside the land of the free: The good people of Geelong are living the good life

Less than an hour down the highway from Melbourne towards the surfing Mecca of Bells Beach, the good people of Geelong are wallowing in freedom.

While Melburnians shivered in their homes huddled by their radiators, Geelong residents have hit the main drag for a Furphy – they invented it you know – a feed and a kick of the footy down at the local park.

The sun was shining on Melbourne on Thursday, but few ventured outside to enjoy it. 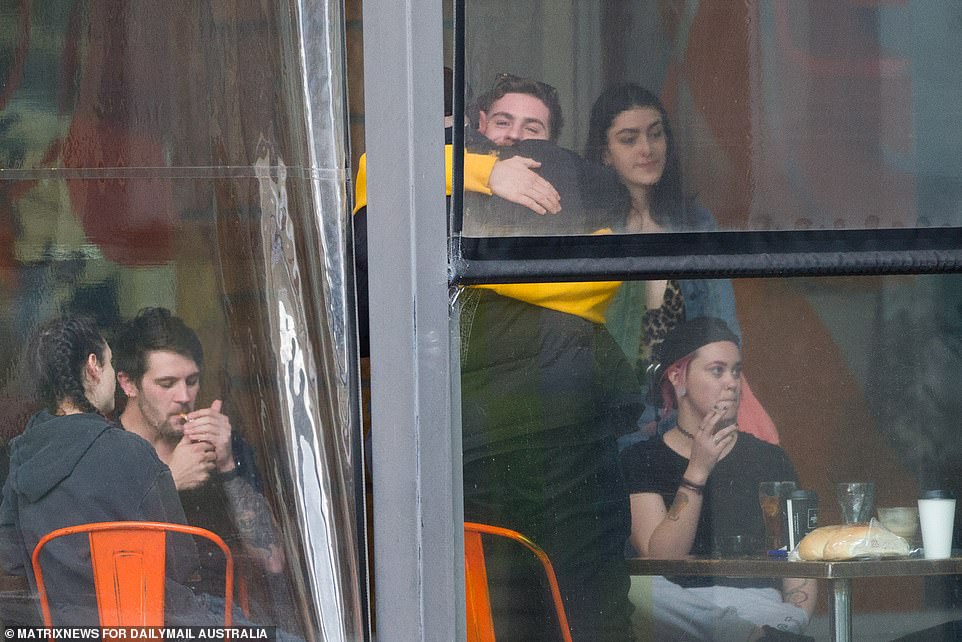 While Melburnians shivered in their homes huddled by their radiators, Geelong residents (pictured) have hit the main drag for a Furphy 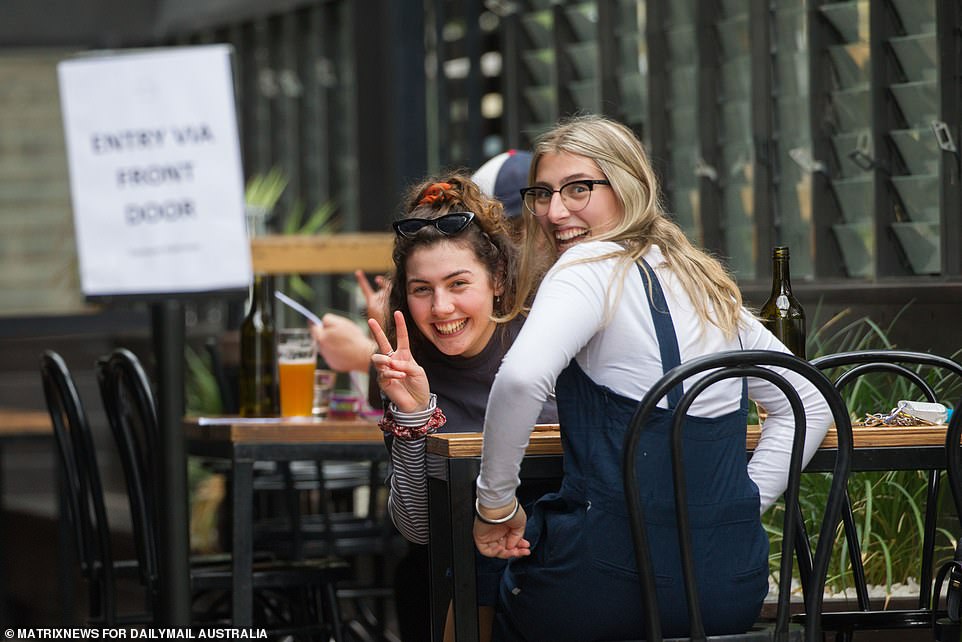 It’s business as usual in Geelong where friends still gather for an ice cold beer, poured fresh from a tap. In Melbourne, they are being forced to drink out of cans at home again 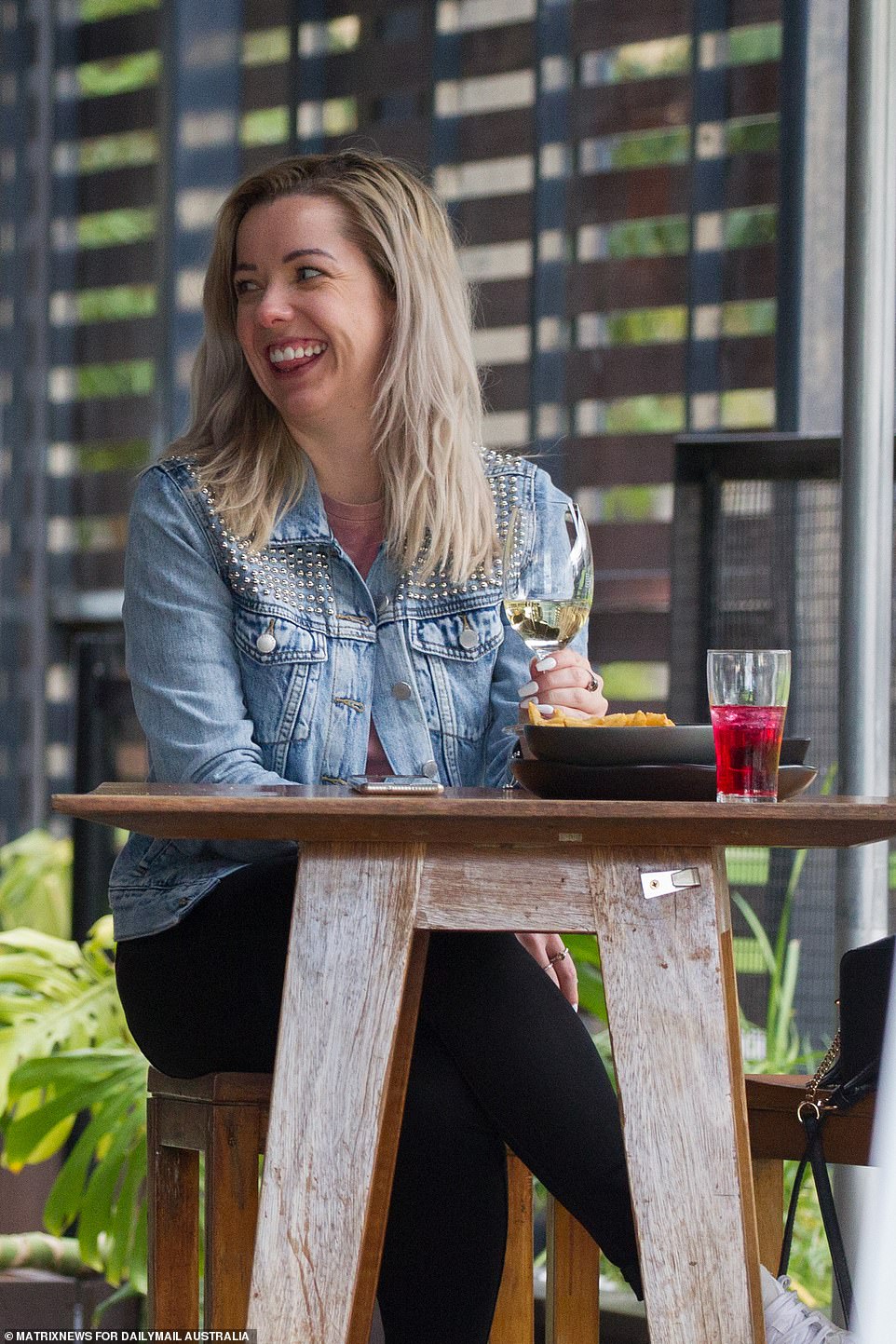 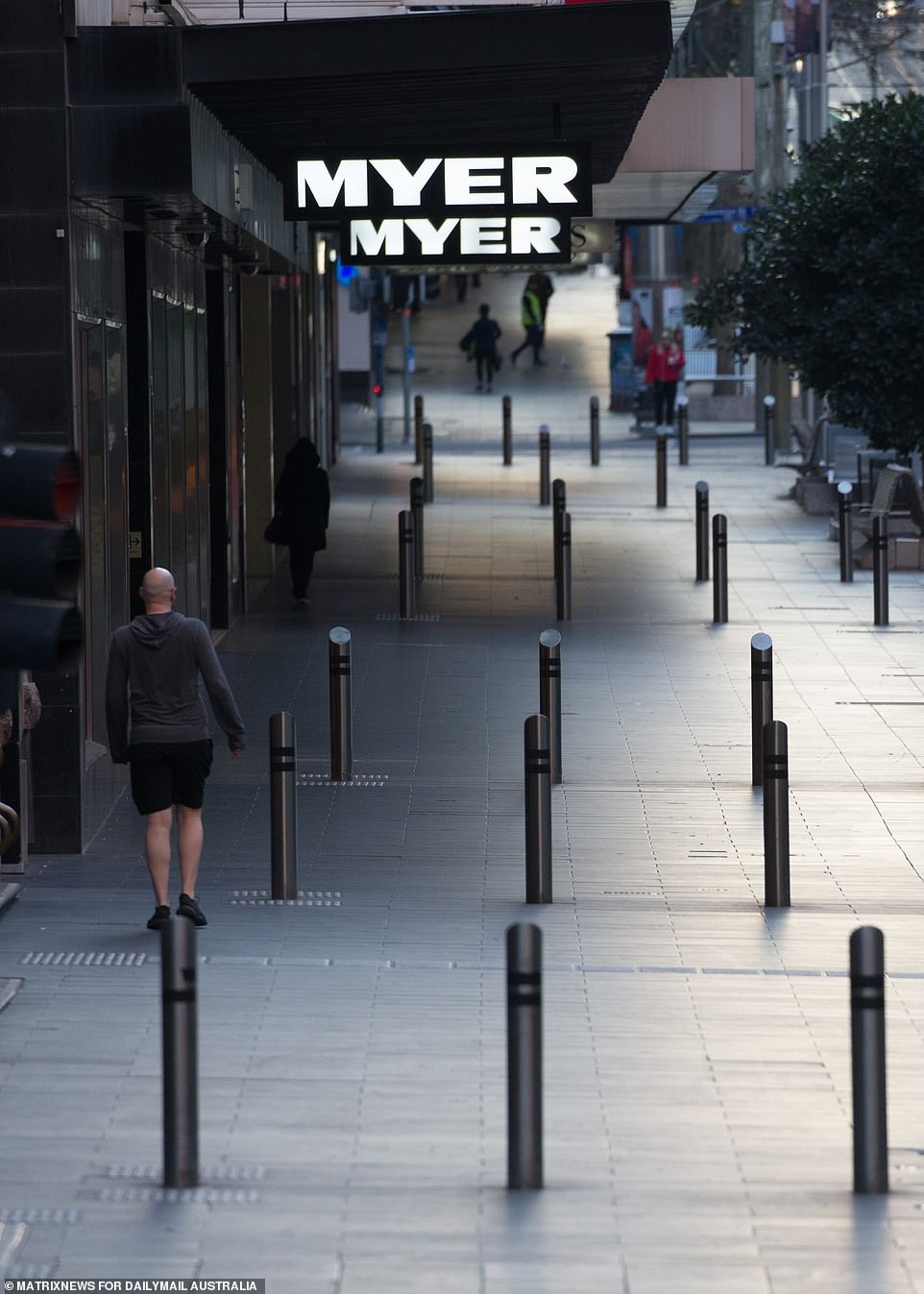 Down the highway and into the heart of Melbourne, Bourke Street Mall was almost completely deserted on Thursday 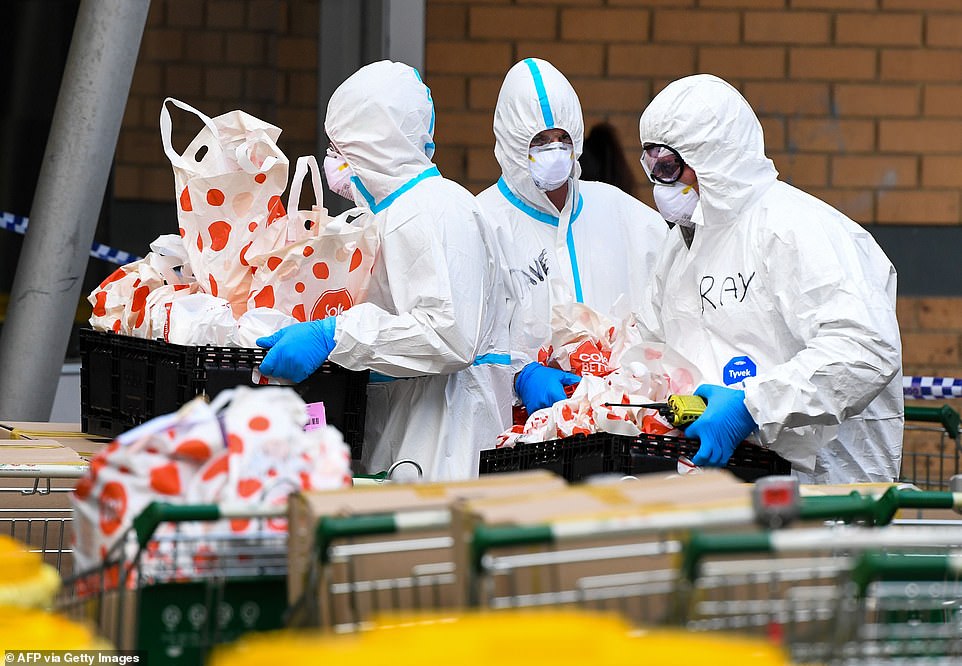 They’re not allowed to unless they intend on working up a sweat with a jog around the suburbs.

Down in Geelong, folk are trying not to think much about what is happening in Melbourne.

This is a town with proud heritage and a fierce rivalry with Melbourne.

It is the land of the AFL’s Geelong Cats, Gary Ablett, great old pubs and the gateway to the legendary Great Ocean Road and all its postcard beaches. 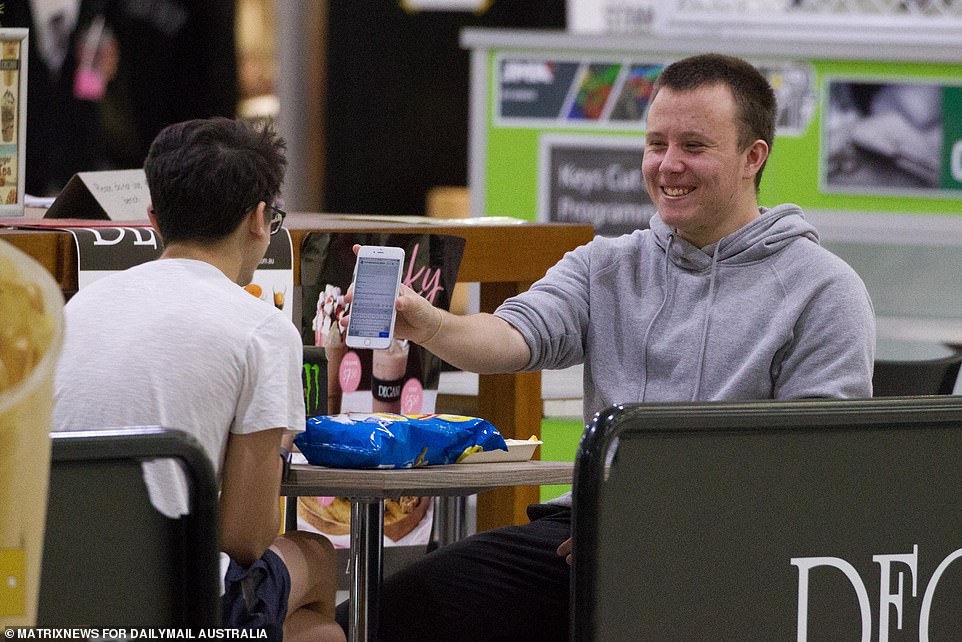 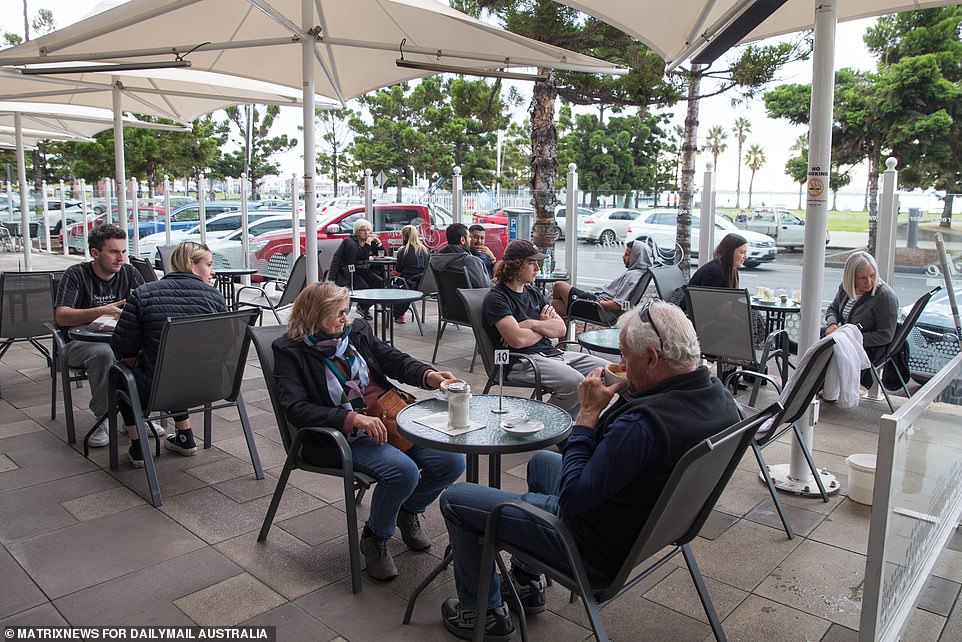 It’s always a nice time for a feed and a coffee in Geelong, where people are still allowed to behave like people in Melbourne cannot 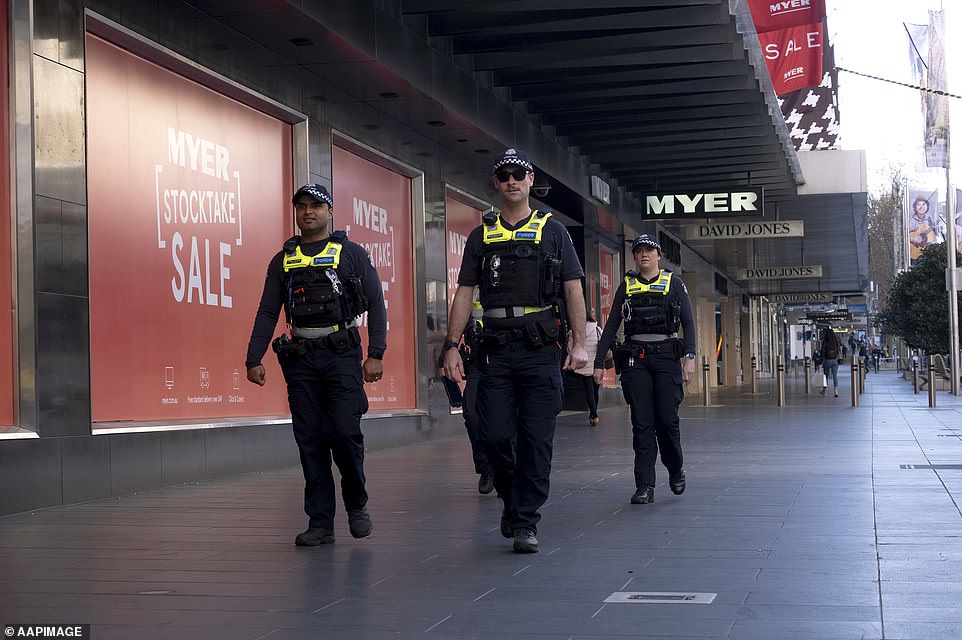 In Melbourne, the only groups of people allowed to gather are cops. On Thursday they marched down the deserted streets of Melbourne 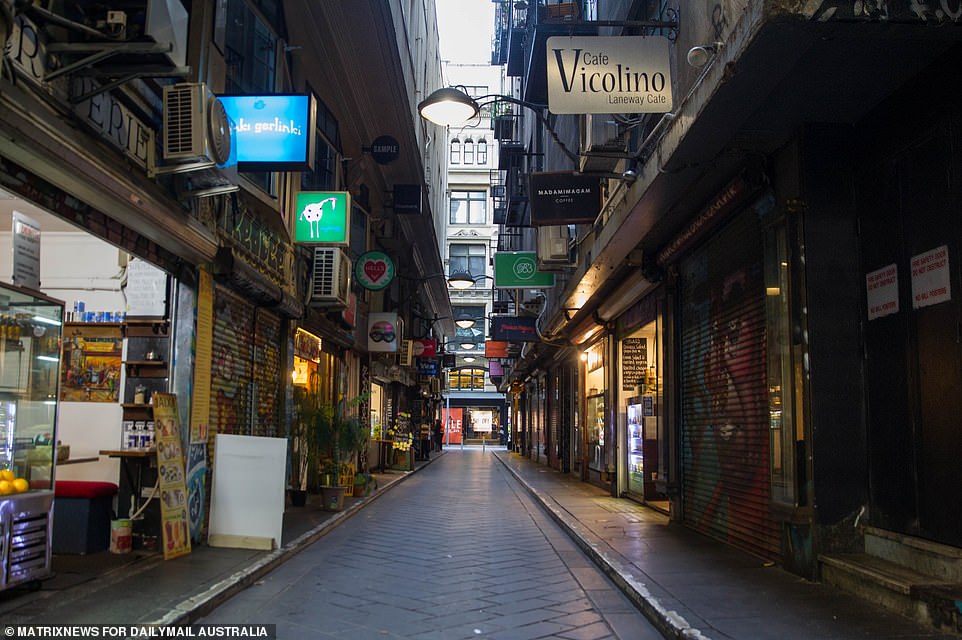 Melbourne’s Degraves Street, in the heart of the CBD, was a cold and lonely place to be on Thursday. Many businesses will not survive the latest lockdown

And they never cared for Melbourne’s Show Day public holiday either.

They party at the Geelong Cup and they have their own show – which sadly was cancelled amid the COVID chaos caused further up the highway.

People from Geelong don’t refer to Melbourne as ‘town’ – their town is Geelong.

Blow-ins from Melbourne usually annoy the good folk of Geelong.

The go there and get drunk. Cause trouble. Or infect them with coronavirus.

It’s hard to imagine the people of Geelong caring much that police have set up a road block stopping Melburnians from getting in. 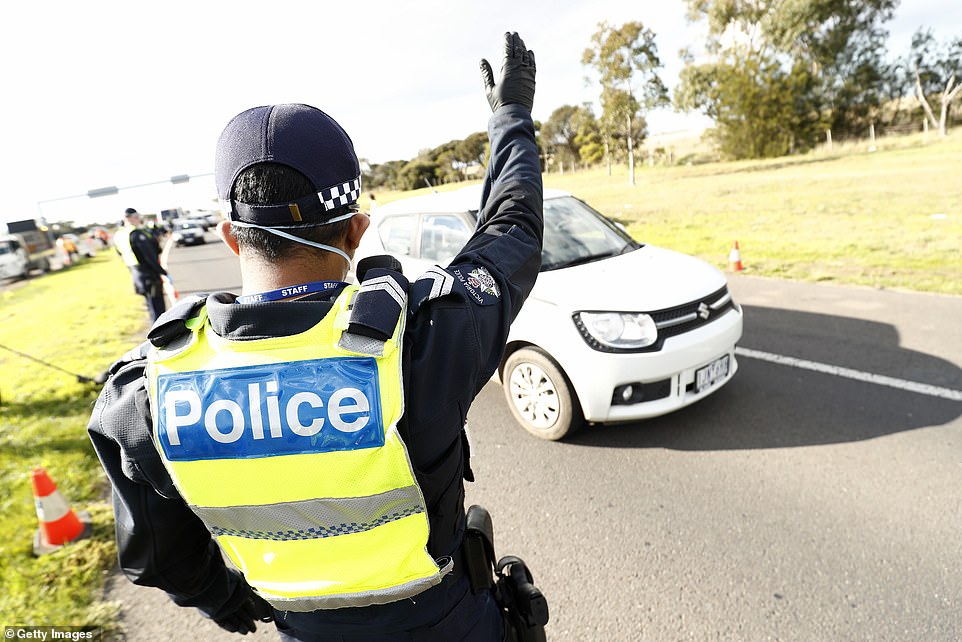 Police stop people travelling from Melbourne on the approach to Geelong at Little River. It has caused massive traffic hassles for people returning to Geelong after working in the infected zones of Melbourne 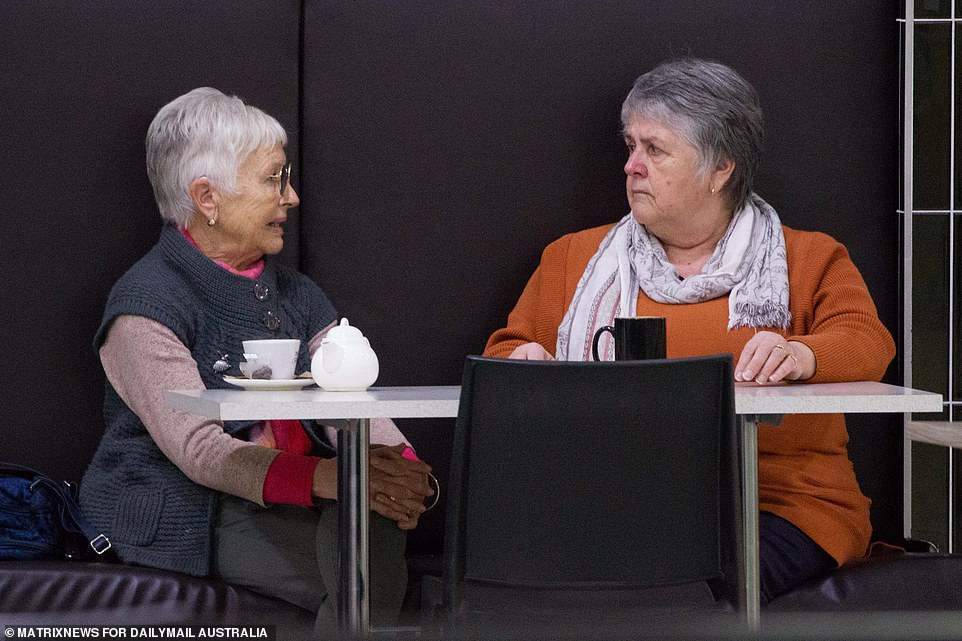 In Geelong, older people don’t fear death when they pop down to the cafe for a cup of tea 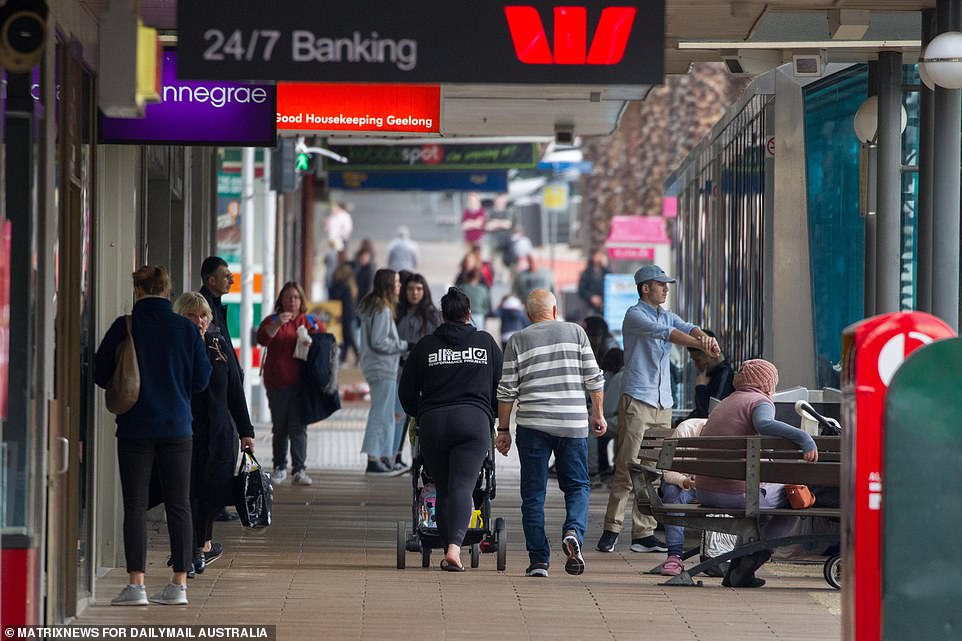 They might be more annoyed that Daily Mail Australia was waved on through that road block without even being stopped.

The policeman manning the road block shook his head in embarrassment as he waved through several vehicles on Thursday afternoon.

Earlier, the road block had caused traffic chaos for the many Melburnians who travel to Geelong to work.

Later, the traffic from the road block near Little River banked back for kilometres all the way to Werribee.

It’s going to get old fast for the G-Town folk.

Across Port Phillip Bay on the Mornington Peninsula, which is separated only by the small opening to the bay, they remain locked up with the rest of Melbourne.

Despite being more than 70 kilometres away from Melbourne’s CBD, and on the other side of the city to the most severe COVID-19 outbreaks, the Mornington Peninsula has been included in Stage 3 lockdown.

Business owners there are fuming. 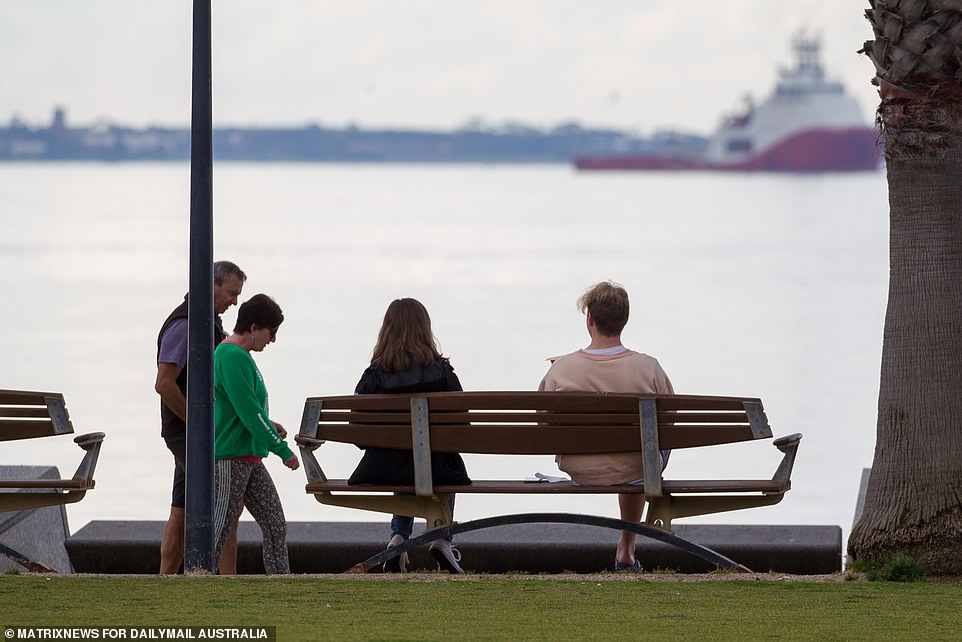 Just sitting by the bay wasting time. In Geelong this is still an acceptable practice 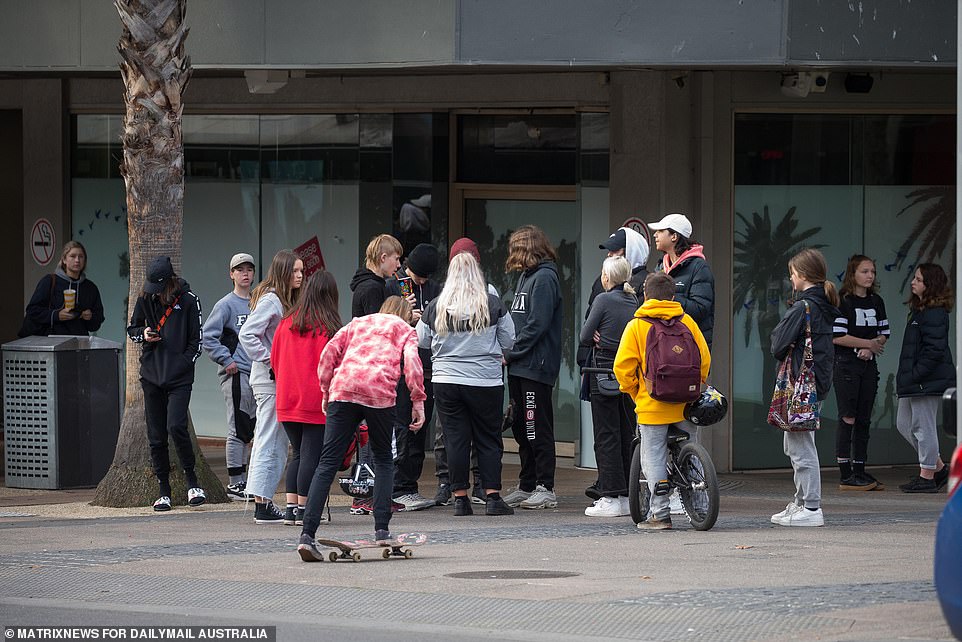 Teenagers gather at the local mall for a chinwag in Geelong. Teens in Melbourne are forced to trash talk their mates over the Xbox One 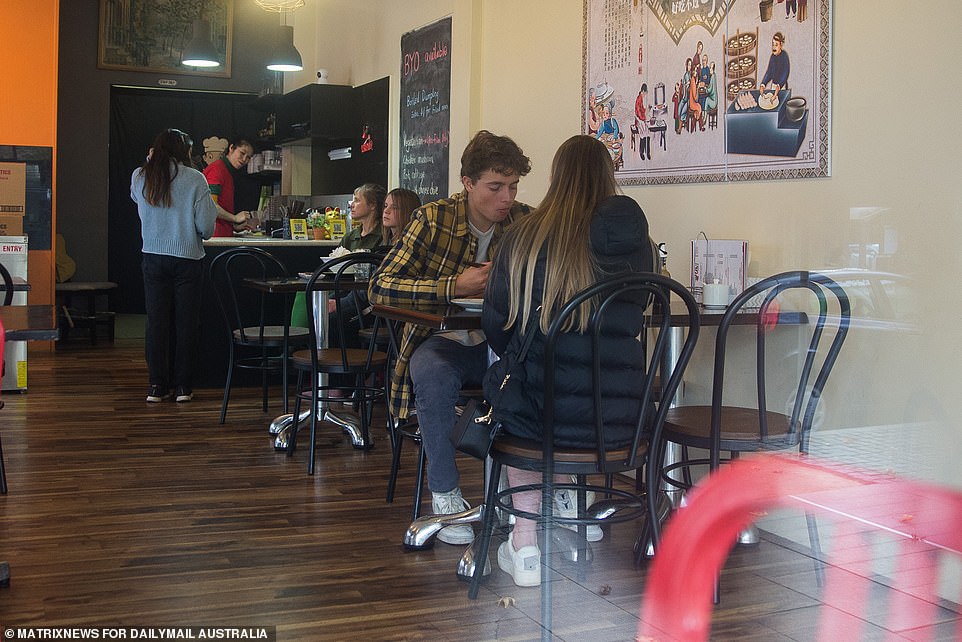 Couples gather for a flat white at a cafe in town. The town of Geelong that is. People who live in the city – Melbourne that is – can take their coffees and move on 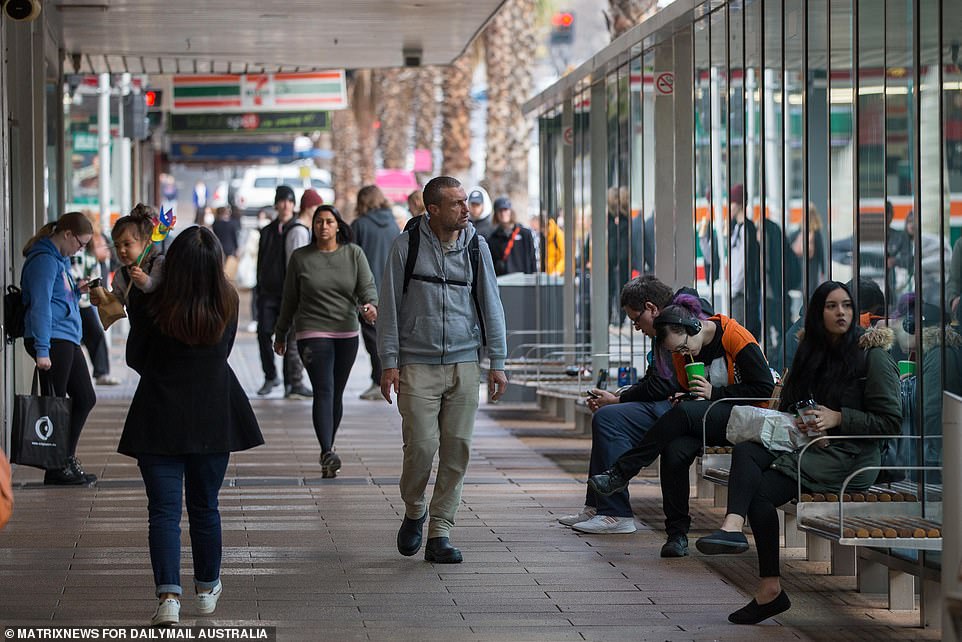 People have no need or want to stay home in Geelong. They move freely here and enjoy a comfort not seen in Melbourne since Wednesday

They’re going broke while Geelong is in the land of milk and honey.

‘We’re probably further from a major outbreak than what Geelong is, and we’re completely shut down,’ he said.

‘We want to make sure everyone’s safe, but the effort we went to to open again … weeks and weeks of work and now it’s all shut down within 24 hours.’

If Geelong cares – and they don’t – it is hardly planning to shut up shop in a sign of camaraderie with its ‘friends’ just across the bay.

On Thursday afternoon, teenagers enjoyed their school holidays like every kid in Melbourne wishes they could.

The mall was packed.

In Market Square Shopping Centre, people were sitting down at the food court to eat.

They shopped, ate and were merry. 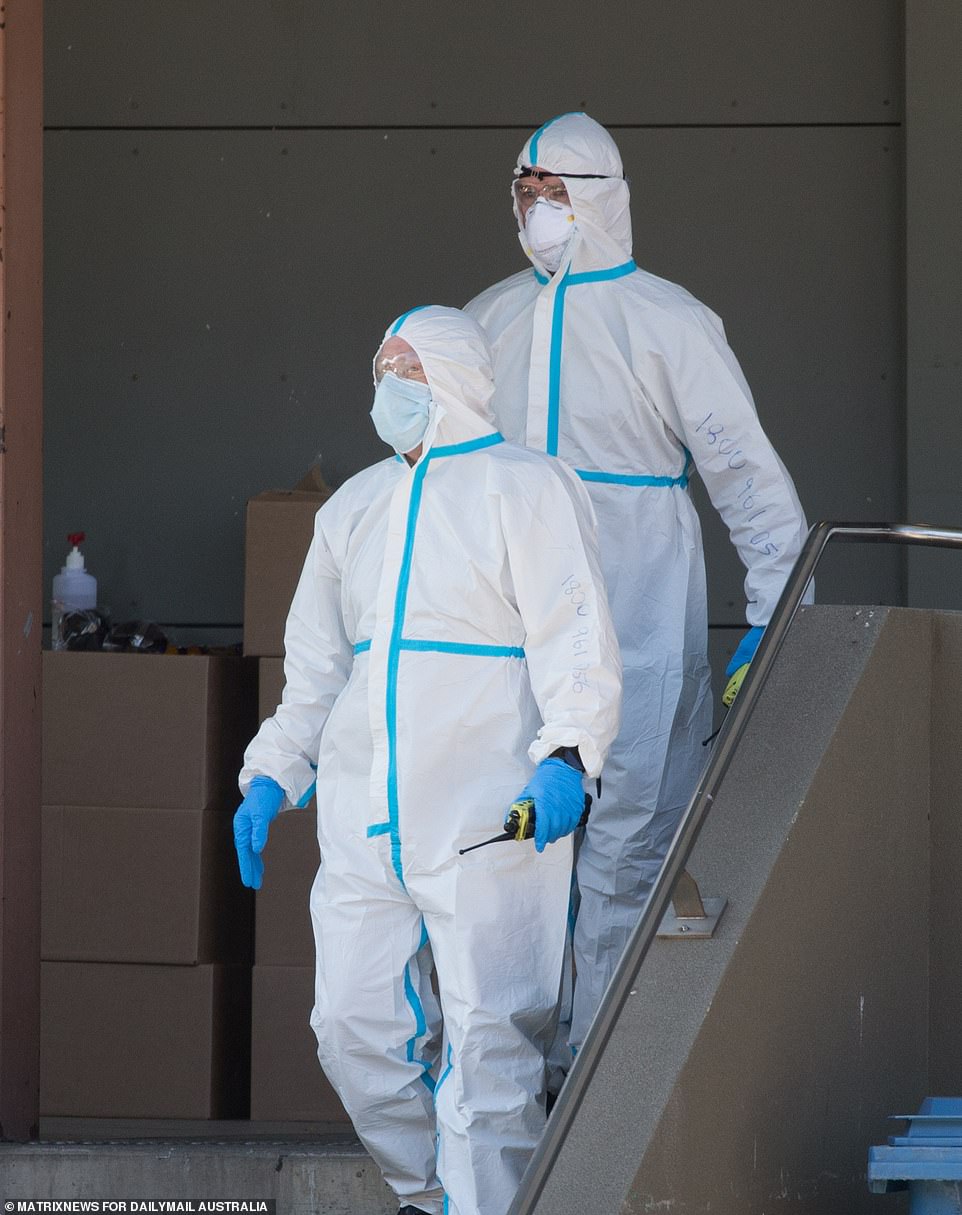 Life in Melbourne is cold and harsh. People delivering supplies to locked down buildings wear plastic in Melbourne 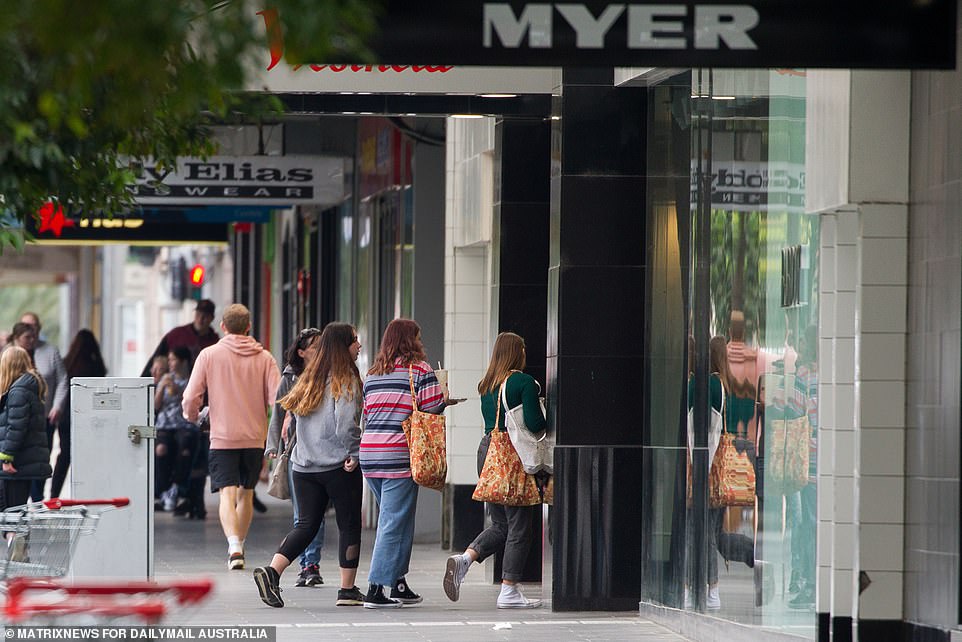 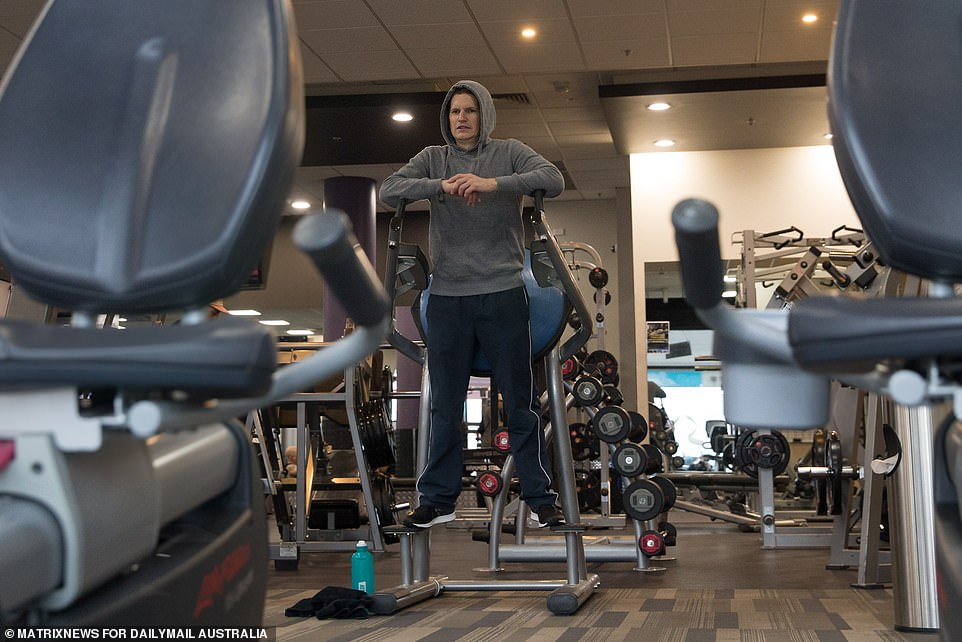 People who live in Geelong are still able to hit the gym. Victorian Premier Daniel Andrews says ‘we’re all in this together’. Geelong people don’t think so 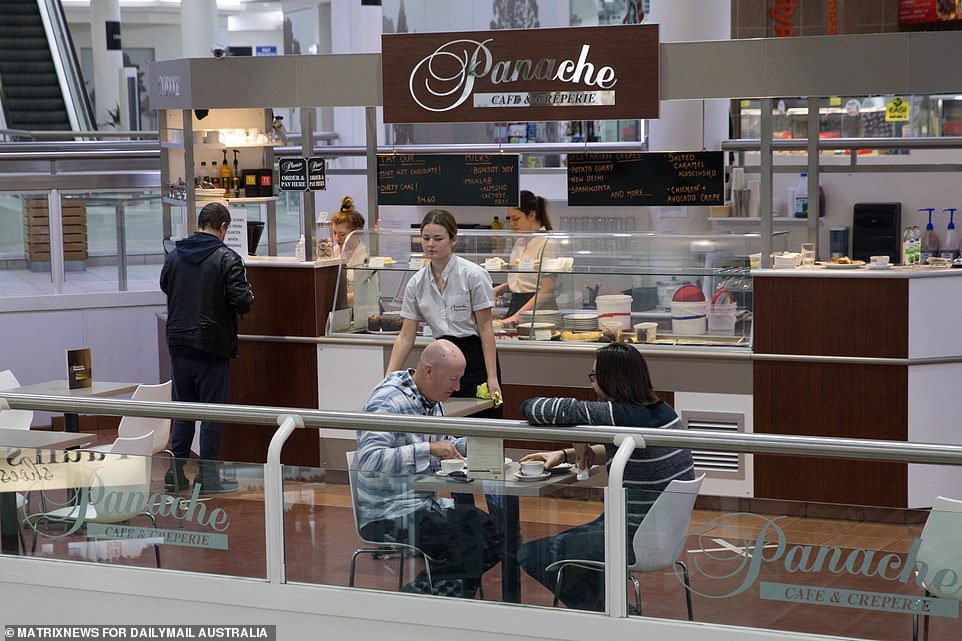 In Melbourne, people are forbidden from sitting down for a meal inside a shopping centre food court. In Geelong, they can sit about and order as many sweet and sour pork dishes as they like

Along Corio Bay, which enjoys a picturesque view of the magnificent You Yangs mountain ridge, people congregated along the foreshore for a meal, a wine and good times.

Children frolicked with their parents in the park along the bay.

And when Geelong take on the Brisbane Lions tonight – in the free land of Sydney – they’ll probably bring home the bacon for their fans too.

It’s going to be a long six weeks in Melbourne.

August 5, 2020
Comments Off on Kim Kardashian and Kanye West ‘jet to remote Caribbean island in a FINAL bid to save their marriage’

July 15, 2020
Comments Off on Dog owner slams Kmart after pooch was nearly KILLED by a popular bargain chew toy

July 25, 2020
Comments Off on Man who smuggled Nissan boss Carlos Ghosn out of Japan talks

July 14, 2020
Comments Off on A gender clinic has agreed to help this boy even though he admits he may still change his mind

Is it ever okay to date a loved ones’ ex? Expert asks if some couplings should be off limits

August 5, 2020
Comments Off on Is it ever okay to date a loved ones’ ex? Expert asks if some couplings should be off limits

Jeffrey Epstein’s private jet goes up for sale for $16.9M

I’d get everyone back NOW to save us from ruin, CHARLIE MULLINS

August 3, 2020
Comments Off on I’d get everyone back NOW to save us from ruin, CHARLIE MULLINS

July 22, 2020
Comments Off on Earthquake in Alaska: Tsunami warning after enormous 7.8m tremor strikes off coast

July 8, 2020
Comments Off on Kogan KitchenAid buys – including 40% off stand mixers and artisan slow cookers
Giant 200kg fur seal is found with a huge HOOK poking through its face
Millionaire matchmaker reveals the seven signs he won’t commit to you