President-elect Joe Biden will ask Congress to green-light another $1.9 trillion in spending to rescue the country from the COVID-19 crisis during a primetime address Thursday night from Wilmington.

Biden will unveil the broad strokes of a rescue plan that includes items that will likely have some bipartisan support – like an additional $1,400 for Americans – boosting the total to the $2,000 per adult President Donald Trump demanded in December.

But it also outlines loftier goals, like implementing a national $15 per hour minimum wage, a campaign promise the Democrat made.

President-elect Joe Biden will speak from Wilmington, Delaware Thursday night and outline a $1.9 trillion plan he wants to see Congress pass in his first few weeks for additional COVID-19 relief 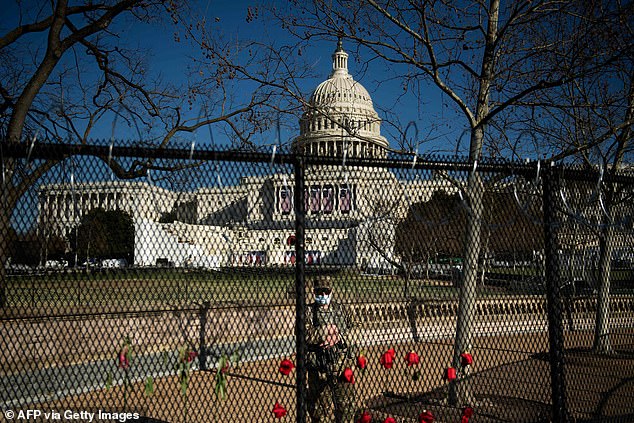 Capitol Hill, which is currently fenced in after last Wednesday’s MAGA riot, will get pressured by Biden’s team to pass a large COVID-19 rescue package quickly. Among Biden’s demands, upping relief checks to $2,000 and a $15 minimum wage

Overall, $400 billion of the $1.9 trillion is specifically geared toward combating the virus, including $160 billion to go toward a national vaccination program.

Incoming senior administration officials on an on-background call Thursday with reporters scoffed at the job the Trump administration has been doing on the vaccine front.

When Biden publicly complained about the roll-out last month, Trump tweeted that it was ‘up to the States’ to distribute vaccines.

‘Biden failed with Swine Flu!’ the president also yelled at the time.

Still, Biden’s team expressed confidence they could dole out 100 million shots in Biden’s first 100 days, even if there wasn’t a third or fourth vaccine option.

Right now, just the Pfizer and Moderna COVID-19 vaccines have been approved.

Incoming senior administration officials also offered that while, for instance, the Trump administration never set up a national testing infrastructure, dollars doled out by Congress could go directly to work.

‘We can buy rapid antigen tests right away that will not only help us start to do testing in places like schools, to support our school reopening,’ an official said.

Biden’s team also believed they would be able to open K-8 schools within his first 100 days in office.

$130 billion is specifically allocated to go toward schools.

The plan also calls for the unemployed to get a boost.

Biden’s plan to reduce student loans by $10,000 per borrower is not in this immediate rescue package, though incoming Biden officials said he still supports it.

A spokesman for the transition did not immediately comment on how many months student loan payments will be waved off.

Other extensions proposed go through September.

That includes Biden’s call for Congress to extend the eviction and foreclosure moratoriums.

The new administration would also like to see an additional $30 billion in relief go to renters and small landlords for energy and water assistance.

Biden’s team said he also wants to see the 15 per cent increase in SNAP benefits go at least through the summer, noting that that’s when ‘childhood hunger spokes due to a lack of school meals.’

While Democrats will soon have a majority in the Senate, the legislative filibuster still exists, meaning 60 votes would be needed to invoke cloture on the ambitious package.

Democrats also have a narrower majority in the House, especially because Biden plucked out several members to join the White House and cabinet.

Boosting the minimum wage and adding 14 weeks of paid sick and family leave, like the proposal outlines, may be too difficult to get passed with Democrats’ razor-thin majority.

Biden also wants money for state and local governments, which Republicans have objected to in the past.

‘We have done a lot of consultation with members of Congress,’ an incoming official told a reporter who asked if the entire Senate Democratic caucus was on board. ‘We have spent a lot of time speaking to and listening to governors and mayors and we think there is a broad understanding of the urgency of the moment, the immediacy of the crisis and the need to act.’

The official said they were ‘hopeful’ that the package would get ‘a lot of support.’

Directly after the plan was released, House Speaker Nancy Pelosi and Senate Minority Leader Chuck Schumer sent out a joint statement praising it.

‘The emergency relief framework announced by the incoming Biden-Harris Administration tonight is the right approach,’ they said. ‘It shows that Democrats will finally have a partner at the White House that understands the need to take swift action to address the needs of struggling communities.’

Down the line, the administration will pitch a ‘recovery’ plan to Congress as well, with a big focus on jobs, especially green ones, officials said.