Karlie Kloss was pictured pushing a baby stroller along the streets of New York City on Sunday morning.

The 28-year-old supermodel appeared to be cutting a very stylish figure while taking her newborn son Levi out for a walk through the Big Apple’s streets.

The fashion industry figure shares her child with her husband, Joshua Kushner, whom she married in 2018. 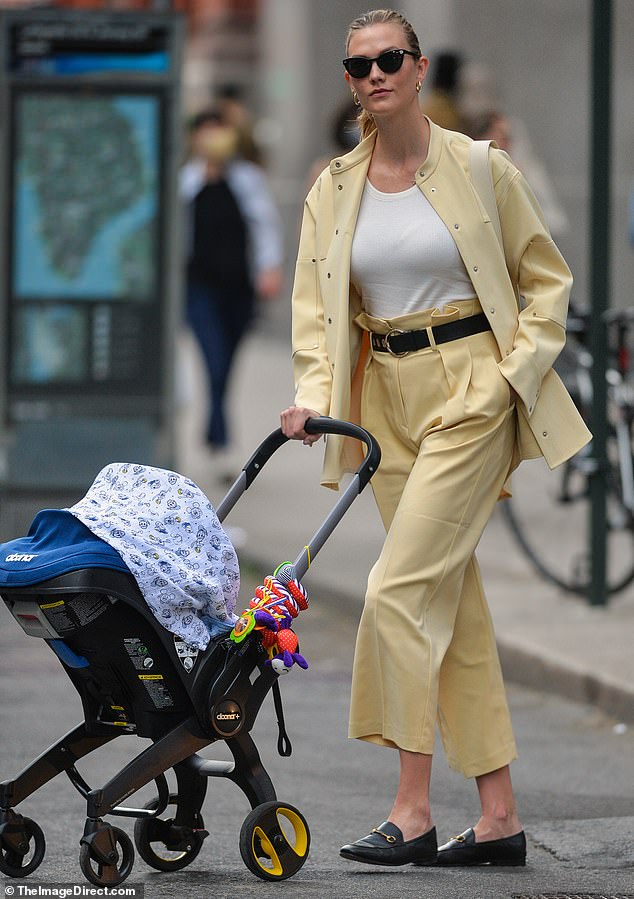 Mom time: Karlie Kloss was seen taking her baby son Levi for a stroll along the sidewalks of New York City on Sunday morning

Kloss was dressed in a light yellow button-up jacket that was paired with a matching set of pleated trousers during her stroll.

The former Victoria’s Secret Angel contrasted the light shade of much of her clothing with a white t-shirt, as well as a pair of leather loafers and a black belt.

The runway regular kept her typically flowing blonde hair tied back in a loose ponytail while spending time in the fresh air.

She accessorized with a stylish pair of black sunglasses, a set of gold earrings, and a single necklace. 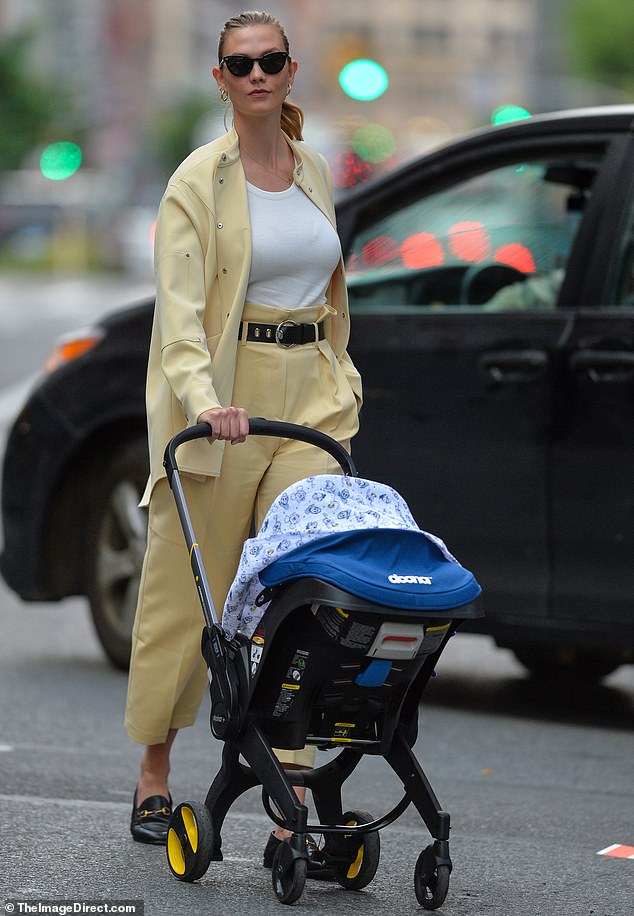 Eye-catching outfit: The former Victoria’s Secret Angel was dressed in a light yellow button-up coat and a matching pair of pleated trousers 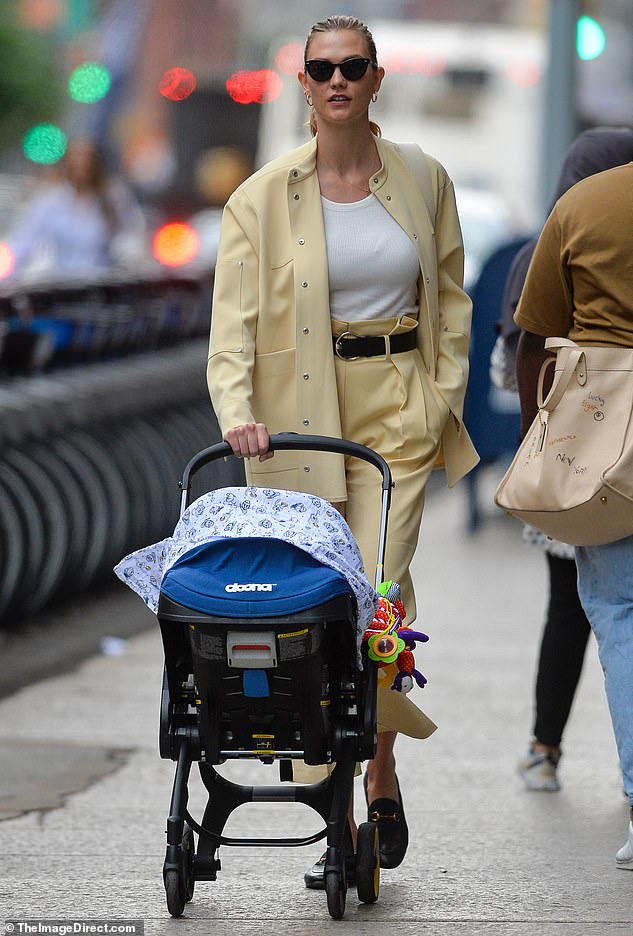 Contrast: The supermodel offset the dominant shade of her outfit with a white t-shirt and a pair of black leather loafers

Kloss shares her child, aged two months, with Kushner, whom she initially met in 2012.

That same year, the two were spotted attending the 2012 Victoria’s Secret Fashion Show with one another, sparking rumors about their connection.

They went on to make their first official appearance as a couple at a gala in 2013, and the model’s now-husband, 35, was first seen on her Instagram account the following year. 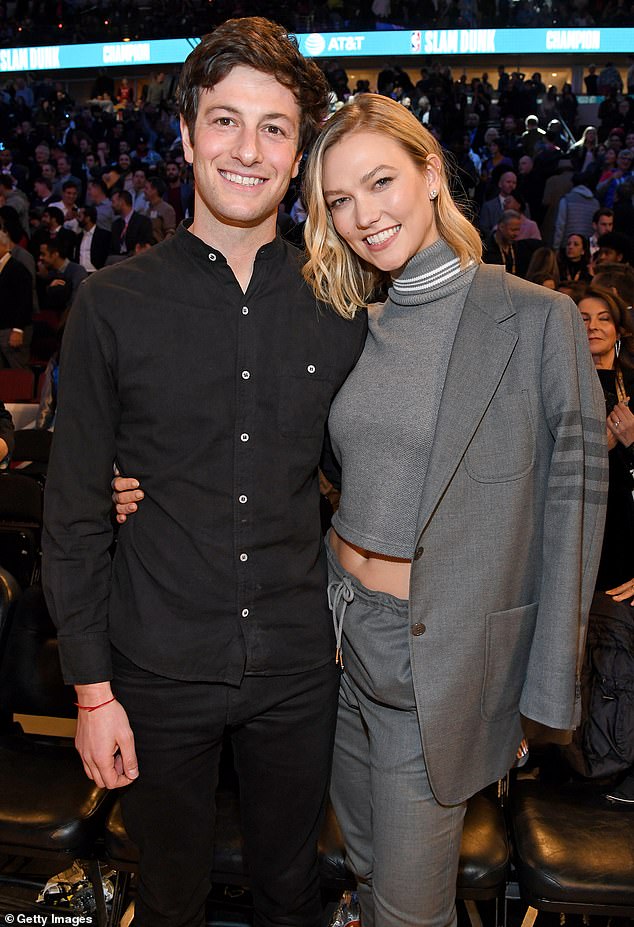 Proud parents: Kloss shares her baby son with her husband, Joshua Kushner; they are pictured together in 2020

The pair went on to tie the knot during an intimate wedding ceremony that was held that same year, and welcomed their child this past March.

Kloss spoke at length about her relationship with Kushner during an interview with Vogue, where she expressed resentment at the fact that her personal life is oftentimes more covered than her status as a model.

‘I’ve chosen to be with the man I love despite the complications. It’s frustrating, to be honest, that the spotlight is always shifted away from my career toward my relationship,’ she said. 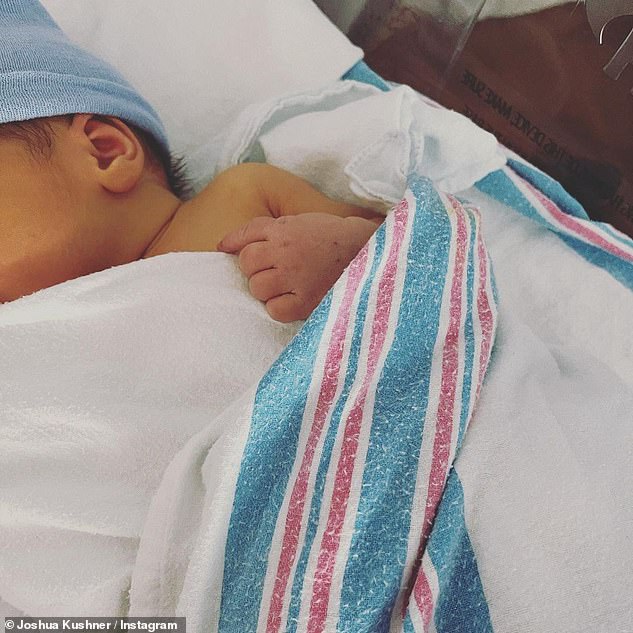 Starting a family: The model married her husband in 2018, and they went on to welcome their baby son earlier this year

The fashion industry figure went on to note that she and her husband are very close and have come to accept each other for who they are.

She remarked, ‘we’ve really grown together personally and professionally. Josh knows that I’m just a nerdy, curious human being. I think that’s why he loves me. We have each other’s back.’

Kloss concluded by noting that she has learned to disregard any outside opinions about her personal life in favor of trusting her own instincts.

‘At the end of the day, I’ve had to make decisions based on my own moral compass—forget what the public says, forget social media,’ she said. 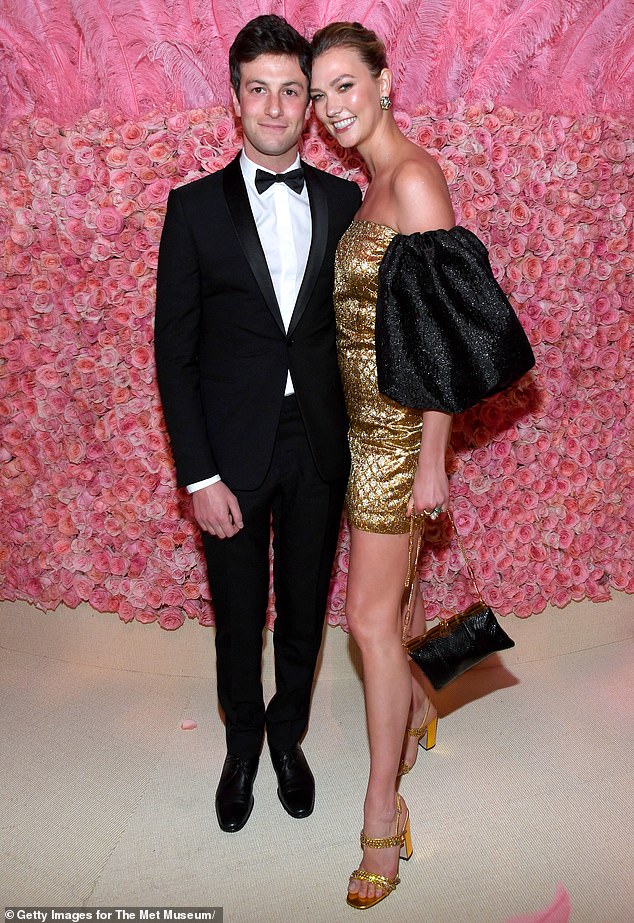 Steadfast couple: Kloss spoke about her relationship with Kushner during an interview with Vogue, where she expressed that they ‘have each other’s back’; they are seen at the 2019 Met Gala