Macaques snatched from their mothers, chained and forced to harvest up to 1,000 coconuts a day

Macaques snatched from their mothers, chained and forced to harvest up to 1,000 coconuts a day

Kulap is a pig-tailed macaque who should be living in a huge, matriarchal family, chattering in the trees of the lush rainforests of Southern Thailand.

He is intelligent and sociable, able to communicate thoughts and feelings — perhaps to his siblings and devoted mother, who should have been by his side for years, protecting and nurturing him as he played, foraged for seeds, leaves and flowers, and grew slowly into adulthood.

But instead, when he was still an infant, he was snatched from the forest, chained by the neck, shoved into a cage barely big enough to hold him and transported to a specialist ‘monkey school’.

There, he was trained to shimmy up 100ft-high coconut trees — always chained — and pick up to 1,000 coconuts a day. 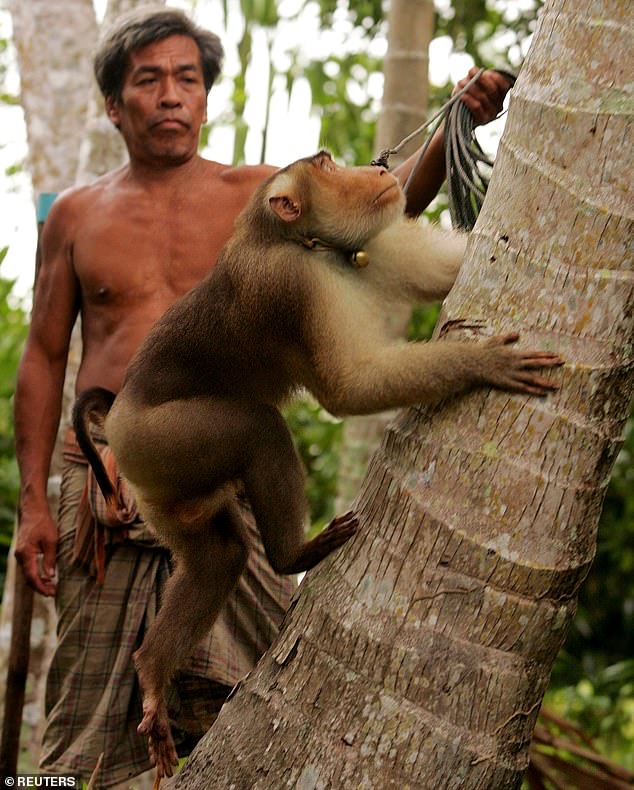 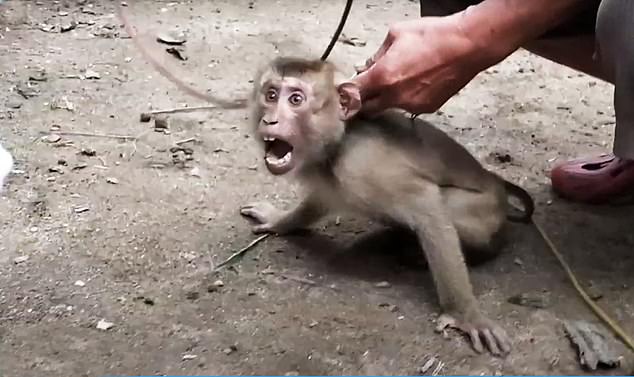 PETA investigators visited eight farms where monkeys are forced to pick coconuts-including those for Thailand’s major coconut milk producers, Aroy-D and Chaokoh, as well as several monkey-training facilities and a coconut-picking competition 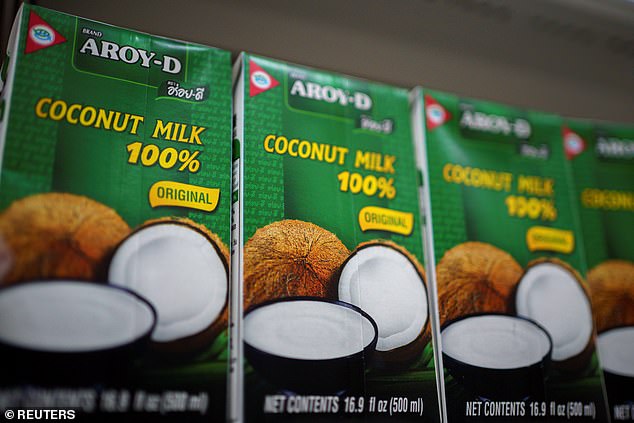 Coconut products are pictured at a supermarket in Bangkok, Thailand, on Monday July 6

His body isn’t much bigger than a coconut itself, but he learned how to use his strength to twist each from its stem and drop it to the ground, before moving on to the next, and the next, and the next, playing his miserable part in the £315 million Thai coconut milk market — about eight per cent of which is bought by the UK.

This week, an undercover investigation by PETA identified 13 plantations and training schools in Southern Thailand where monkeys were forced to pick coconuts for export around the world.

Many, like Kulap, had been trained for three months not just to harvest coconuts, but also cruelly to ride bicycles, shoot basketball hoops, perform sit-ups, yoga and pretend to lift weights — to double as money-spinning entertainers for tourists.

They’ll be either up trees picking — passed between handlers to maximise their work — or shackled. And if they become feisty when they hit puberty aged between five and six, they’ll have their canine teeth wrenched out to stop them fighting back.

As Peta Senior Vice President of International Campaigns Jason Baker puts it: ‘These animals —some of whom were seized from their natural habitat as babies — cannot play or be with their families.

‘They are denied freedom and any semblance of a natural life, and the industry’s training methods are harsh and psychologically damaging.’

The mental effects on the poor creatures are often far worse than the physical impact. 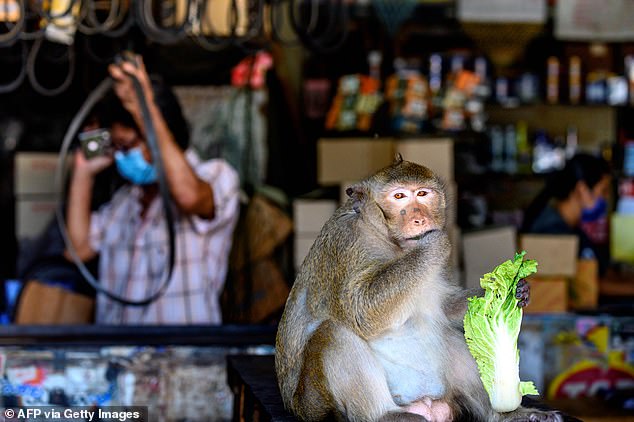 Waitrose has stopped selling coconut products from Thailand after it emerged some products used slave monkey labour to harvest the fruit. Pictured: A macaque eats a piece of Chinese cabbage outside a shop in Lopburi, Bangkok

Naturally sociable animals, the ‘slave monkeys’ suffer terrible loneliness and depression, grieve for lost companions and, when they’re not picking, pace backwards and forwards as far as their chains stretch.

Their life expectancy is just 15 years, compared to 36 in the wild.

Yet none of this has dented our apparently insatiable demand for coconuts. Over recent years, coconut products have become the new superfood. 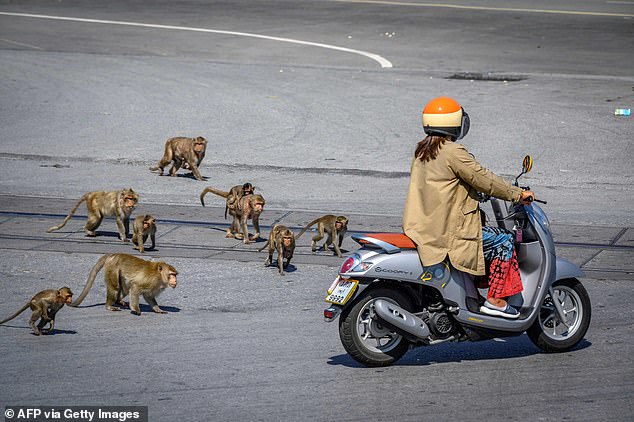 The benefits — supposedly helping everything from weight loss to lowering cholesterol, digestion and immunity — are lauded in health blogs, magazines and by celebrities.

Actress and multi-millionaire ‘wellness’ guru Gwyneth Paltrow recommends swilling coconut oil around your mouth every evening to whiten your teeth, and slathers it over her face and body.

Ladies in Lycra swig bottles of £2.50-a-pop coconut water on the way home from Pilates classes, blissfully unaware that it’s not even a nut, but a drupe (like a peach or plum) and is often produced at terrible cost to the animals who harvest it.

But perhaps not for much longer. For while some people have pointed out that macaques have been trained to pick coconuts for over 400 years, and written to newspapers asking if it’s any different from using oxen in the fields or horse-drawn milk floats, the reaction from British supermarkets has been immediate.

More from Jane Fryer for the Daily Mail…

In the last week alone, after Peta’s investigation, Waitrose, Ocado, Co-op and Boots have vowed to stop selling some goods.

Morrisons, meanwhile, had already removed products made with monkey-picked coconuts from its shelves, Sainsbury’s said it was ‘actively reviewing’ its ranges after a plea from Carrie Symonds, Boris Johnson’s fiancee, and Tesco confirmed it did not sell any offending goods.

Walmart-owned Asda said it was removing Aroy-D and Chaokoh branded products from sale while it investigated the report with its suppliers.

Meanwhile, the Thai government appears in denial. Commerce minister Boonyarit Kalayanamit insisted the animals were well-treated, not exploited and even enjoyed the work. But Kulap and his fellow macaques are not the only victims of the global obsession with all things coconut.

Like palm oil, it is used in everything from hair conditioner to mosquito repellent. But somehow, unlike palm oil — which many now boycott because of the impact oil palm cultivation has had on the world’s orangutans — coconut products have been embraced for their health benefits with little concern for environmental impact.

According to the International Union for the Conservation of Nature (IUCN), the coconut industry threatens more than twice the number of species affected by oil palm, olive oil and soybean production combined.

The IUCN says coconut plantations have directly contributed to the extinction of some species, including a bird called the Marianne white-eye from the Seychelles and the Solomon Islands’ Ontong Java flying fox.)

Of course, coconuts can be picked by humans — and in most countries are — but people are just not as efficient as macaques, usually averaging a paltry 80 coconuts per day to the macaque’s 1,000-plus. Men also need paying and insuring.

Harvesting coconuts provides a critical source of income in poorer countries. But there are ways to do it that reduce the environmental impact and maximise benefits for local people.

Countries such as India are embracing mechanised pickers and many farmers now favour dwarf trees, whose coconuts are easier to harvest.

But while the reaction of British supermarkets has been reassuring, I suspect nothing has changed for poor Kulap.

Unless he follows the example of his fellow monkey Brother Kwan who, in 2009, after years of beatings and harvesting, killed his 48- year-old Thai handler by hurling a coconut at his head.

August 3, 2020
Comments Off on Teenage revellers gearing up for Schoolies week are told to celebrate via ZOOM due to coronavirus

August 6, 2020
Comments Off on Mother of tragic Charlie Gard feels ‘surge of pure love’ as she holds her newborn son

July 16, 2020
Comments Off on NSW Police arrest man at Bunning’s in Byron Bay

August 3, 2020
Comments Off on Inside Mike and Carole Middleton’s Buckleberry mansion

July 16, 2020
Comments Off on Cops hunt suspect who used a CANE to beat and seriously injure NYPD officers

15 tortured children rescued from an Islamic school in Nigeria

July 21, 2020
Comments Off on 15 tortured children rescued from an Islamic school in Nigeria

Rev. Al Sharpton and the mother of Eric Garner attend the funeral of a one-year-old boy shot dead

July 28, 2020
Comments Off on Rev. Al Sharpton and the mother of Eric Garner attend the funeral of a one-year-old boy shot dead

August 8, 2020
Comments Off on Top Oxford vaccine scientists in ethics row over whether to infect volunteers with coronavirus
Coronavirus panic-buyers flaunt hoards of groceries as Melbourne goes into lockdown
Cruel tragedy that made me have a secret baby