Newly elected Rep. Marjorie Taylor Greene has said she plans to file articles of impeachment against Joe Biden on the first full day of his presidency, alleging ‘abuse of power.’

Greene announced the provocative move in an interview with Newsmax on Wednesday night, insisting it was not merely symbolic, despite the futility of her plan with Democrats controlling the House.

‘We cannot have a president of the United States that is willing to abuse the power of the office of the presidency and be easily bought off by foreign governments, foreign Chinese energy companies, Ukrainian energy companies,’ Greene said.

‘So on January 21 I will be filing articles of impeachment on Joe Biden,’ added Greene, a Georgia Republican with a history of touting conspiracy theories, and an ardent Trump loyalist.

Newly elected Rep. Marjorie Taylor Greene has announced she plans to file articles of impeachment against Joe Biden on the first full day of his presidency 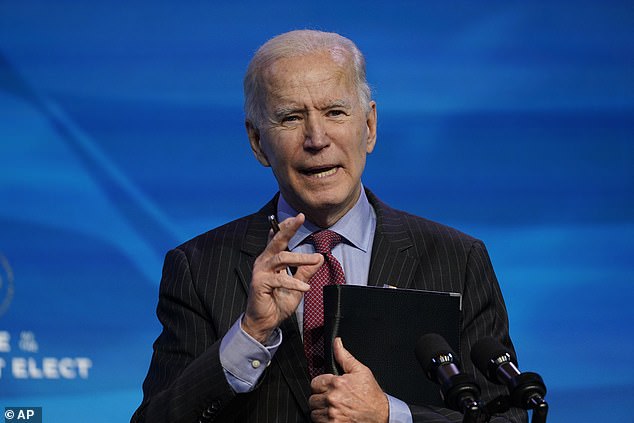 Greene alleges ‘abuse of power’, citing well worn claims that Biden pressured the Ukrainian government while he was vice president to financially benefit his son

Alleging abuse of power, Greene specifically pointed to claims that while he was vice president, Biden illegally pressured the Ukrainian government to fire a prosecutor who was investigating an energy company that his son sat on the board of.

The claims spurred Trump’s own first impeachment, after House Democrats alleged he had abused power by pressuring Ukraine to investigate Biden.

On Newsmax, host Greg Kelly pointed out that Greene’s party is in the minority, and asked her if her impeachment plan was merely symbolic.

‘I’m a big believer in having people in office that are actually willing to do the job and I can imagine people in this country being so fearful of a future of a Biden presidency that they may be willing to commit violence like they did in the Capitol here in Washington, DC,’ Greene said.

‘We cannot have that, I do not condone that violence,’ she quickly added.

‘The American people need to know there are Republicans in Congress that are willing to stand up and fight for them regardless of being in the minority, regardless of having odds against us.’

On Twitter, Greene reiterated her plan, writing: ‘It’s time to take a stand. I’m proud to be the voice of Republican voters who have been ignored.’

‘On January 21, 2021, I’ll be filing Articles of Impeachment against Joe Biden for abuse of power,’ she tweeted.

Fox News host Sean Hannity, though he did not specifically mention Greene’s plans, amplified the call for attempting to impeach Biden on day one of his term.

‘In a truly amazing example of hypocrisy, the media still can’t be bothered to cover Joe Biden’s Ukraine quid pro quo. You can’t make it up. He bragged about it on tape,’ Hannity said on his show on Wednesday night. ‘If you apply the same standards, we’re going to have to impeach Joe a week from today.’

In Biden’s infamous taped remarks, he admitted to pressuring Ukraine to fire a prosecutor by threatening to withhold billions in foreign aid, but did not say it was to shield his son’s company. The Biden camp has always insisted that the prosecutor in question was corrupt and needed to be removed for that reason.

Greene’s impeachment vow is the latest sign of a growing rift in the Republican conference, between die-hard Trump loyalists and others who are disturbed by their efforts and see Trump as toxic to the party’s future. 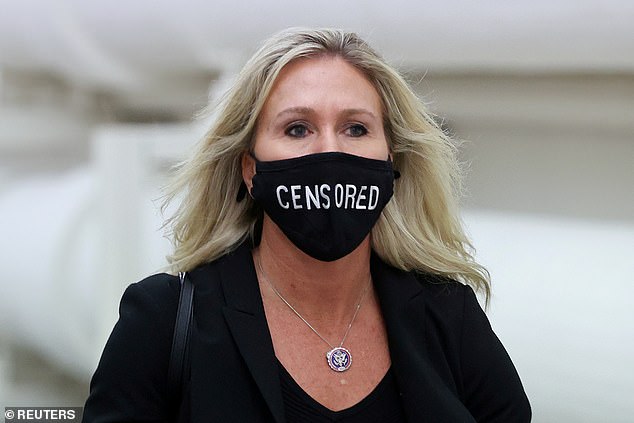 U.S. Representative Marjorie Taylor Greene (R-GA) wears a mask reading ‘Censored’ as she walks to the House floor during debate on the second impeachment of President Trump

Kinzinger was responding to Greene’s tweet about Trump’s second impeachment reading ‘President Trump will remain in office. This Hail Mary attempt to remove him from the White House is an attack on every American who voted for him.’

‘These are quite literally the things that incite insurrections,’ Kinzinger wrote on Wednesday morning.

‘Four years of programming people with this message. This is also quite literally anti-democracy. Let’s get rid of this ‘DC for fame’ culture that this exemplifies.’

Greene was thrown off the House floor on January 3 during the first session of the new Congress because she was not wearing a face mask.

On Wednesday she wore a face mask reading ‘Censored’ for the impeachment vote.