A Michelin-star chef turned Playboy model is launching a cookbook featuring ‘aphrodisiac recipes’ to help couples reignite the spark during the pandemic.

Cândida Batista, 39, from Brazil, is using her culinary expertise to help couples in crisis with a new cookbook launch set to feed appetites and make mouths water.

The book will feature several easy-to-cook aphrodisiac recipes to ‘stimulate’ one’s sex drive for couples who are self-isolating at home. 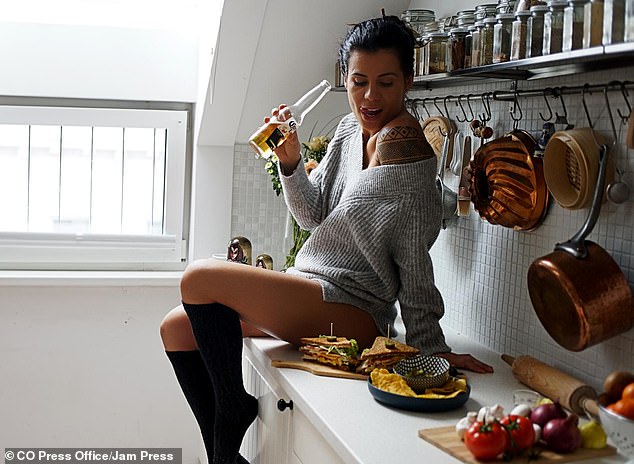 Spice things up! Cândida Batista, 39, from Brazil, is a Michelin-starred chef who is now using her expertise to help couples heat things up outside of the kitchen 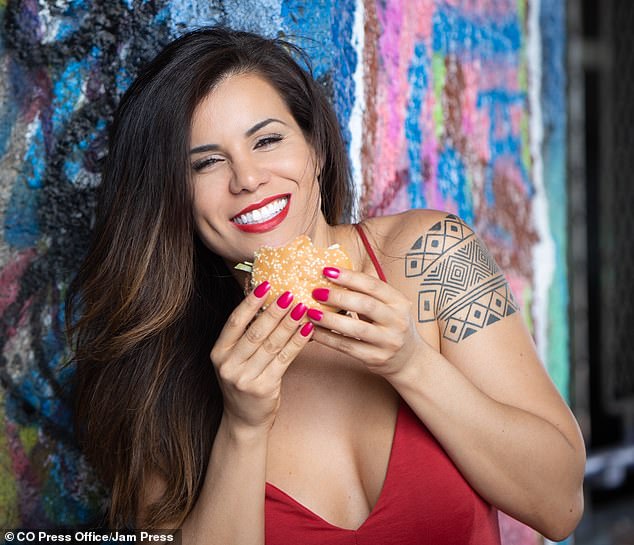 Expert: The former Playboy model is putting together a cookbook filled with ‘aphrodisiac recipes’ that she promises will help couples to reignite their romance

(These ingredients help to ‘keep your sex hormones on point’ and increase your dopamine levels, which will help couples to bond.)

(The Capsaicin in the chili triggers the release of endorphins to improve your mood, while the spinach boosts blood flow.)

Chocolate soufflé with honey and pistachios

(This dish will serve as a sexual stimulant, while also helping to combat any erectile issues.)

Coffee or matcha with cinnamon-topped petit-fours

(The caffeine will make sure that you don’t fall asleep too early in the evening, while cinnamon has been known to increase a woman’s interest in love-making.)

Chef Cândida, who posed for the cover of Playboy Slovakia in January this year, has served politicians, diplomats, royalty and the military working as a chef at the Brazilian embassy in Vienna.

But she has now turned her focus to helping couples keep the passion alive in their relationships through food – explaining to DailyMail.com that a delicious and aphrodisiac-based meal can cure all kinds of sexual issues.

‘Either dealing with erectile dysfunction, or just the boredom from every day routine, many couples [reveal what issue they want to tackle] when asking me for a romantic dinner,’ she said.

Cândida believes that the entire environment of the dinner is key to creating the perfect romantic atmosphere, noting that she encourages couples to think about lots of different aspects beyond the food itself.

‘For sure the whole set up helps: a sexy playlist, carefully chosen lingerie, the very cliched, but never outdated, candles and flowers, some red wine [which helps you] to relax and increases the sexual appetite for woman, says a 2009 Italian research with 800 subjects.’

But the key element of any passionate plating is, of course, the food – and Cândida has plenty of ideas about what ingredients help to fan the flames of romance.

Speaking about her favorite aphrodisiac recipes, Chef Cândida said: ‘I believe in food as the best medicine, so I add a few ingredients on my dishes to please the palate and give an extra boost after the dessert is served.

‘One of the most requested meals that I serve [include]: Avocado cream, which provides healthy fats, and matches perfectly with salmon tartar and its omega-3, which according to The Journal of Reproductive Medicine keeps your sex hormones on point.’ 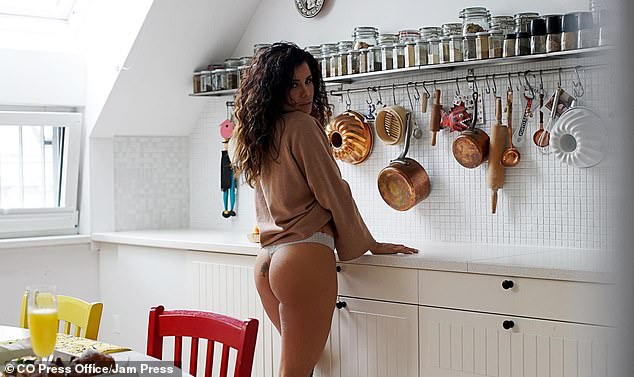 Routine: ‘I believe in food as the best medicine, so I add a few ingredients on my dishes to please the palate and give an extra boost after the dessert is served,’ Cândida said 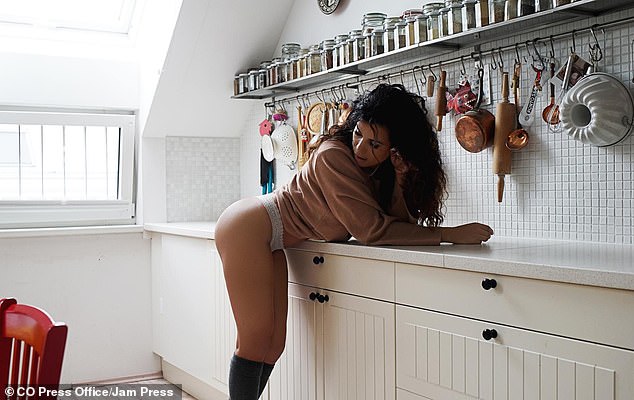 Kicking things off: The cooking expert recommends that couples start a meal with a high-protein dish like salmon tartare and avocado cream

She continued: ‘Protein rich foods increase dopamine levels, which can help to build bonding between couples.

‘Rib eye steak with chili sauce, that contains Capsaicin, known for triggering the release of endorphins, accompanied by spinach, [which is a] source of folate, a great blood flow booster.’

For the final bites of the meal, Cândida recommends ‘a sexy chocolate soufflé’, which she says is ‘an all time winner for its tastes and look’.

‘[You should serve it] with honey, that has been used for centuries as sexual stimulant, and pistachios [which improve] erectile function parameters.

‘Finishing up with coffee or matcha to add up some caffeine, guarantees that “going to bed” [doesn’t mean you are going to] sleep.

‘With them I always serve some petit-fours with cinnamon; its aroma is believed to cause woman to experience more interest than usual in lovemaking.’

She added to Jam Press: ‘I bet on recipes like salmon with caper sauce, shrimp with garlic and pepper, and for dessert, it is even worth a hot chocolate with cinnamon.

‘These are some tricks that stimulate sexual appetite, using food that increases the production of sex hormones and improves blood circulation. 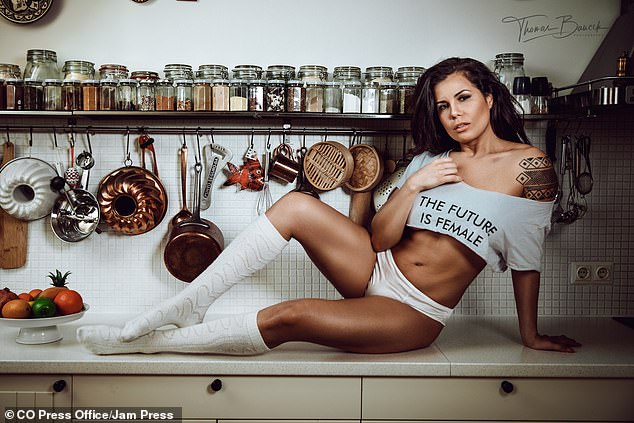 Don’t skip dessert! At the end of the meal, Cândida says both partners should drink coffee or matcha to ensure that they don’t fall asleep too early 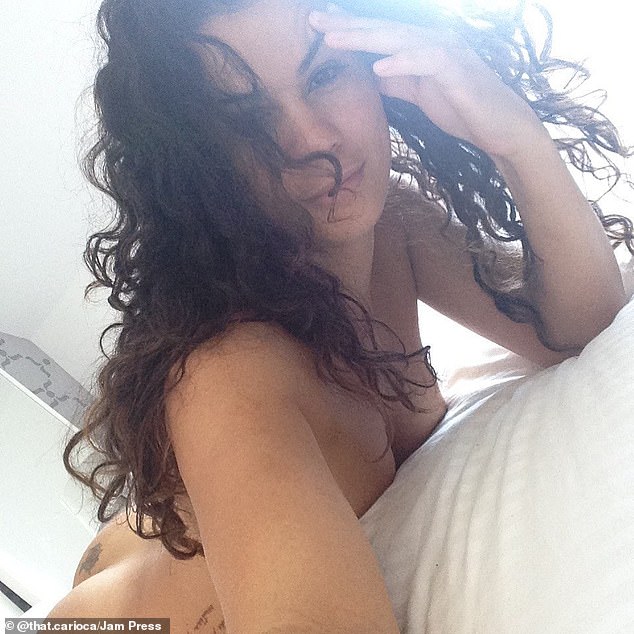 Tips: ‘My first tip is to not over do in anything: too much alcohol is counterproductive, and stressing out with details can be exhausting,’ she said

‘They are great for a dinner for two.’

As far as alcohol is concerned, Cândida has some great tips for which bottle to choose – but she notes that no matter what you are drinking, you should make sure that you don’t go overboard.

‘My first tip is to not over do in anything: too much alcohol is counterproductive, and stressing out with details can be exhausting, that’s when the professional hands is necessary and moderation is always the key.’

Chef Cândida has worked at the world’s most famed Michelin starred restaurants, including establishments endorsed by Gordon Ramsay and Konstantin Filippou.

Speaking about her work experience, Chef Cândida said: ‘The scenes that seem exaggerated on TV are real, the conversations are aggressive and the level of stress is indescribable, but it was where I learnt the most.’

In 2004, she abandoned her field in architecture and decided to pursue gastronomy.

She has also worked in JW Marriot, where she won 1st place in a student competition and scored an internship at Le St Honore-Meridien.

August 5, 2020
Comments Off on Toddler survives being knocked down and run over by a car in Brazil

August 2, 2020
Comments Off on Hunt for ex-boyfriend as woman’s body found in fridge in Brazil

August 5, 2020
Comments Off on CAS rule in Barcelona’s favour after Santos claim over Neymar transfer

August 7, 2020
Comments Off on Thiago Alcantara is desperate to experience the Premier League next with Liverpool interested

August 14, 2020
Comments Off on The jaw-dropping images that have wowed the judges in the annual Moscow International Foto Awards

August 13, 2020
Comments Off on Man City owners ‘fail in £3.5m bid’ for Brazil U20 midfield star Vinicius Souza from Flamengo

August 3, 2020
Comments Off on Pensioner burns down 673 hectares of Brazilian rainforest by setting car alight in insurance scam

August 13, 2020
Comments Off on Botafogo and Fluminense REFUSE to resume playing this week amid ‘chaotic scenes’ in Brazil

CNN Brazil reporter is mugged live on air at knifepoint

August 9, 2020
Comments Off on CNN Brazil reporter is mugged live on air at knifepoint
Hunt for ex-boyfriend as woman’s body found in fridge in Brazil
Two Brazilian police officers will face criminal charges after violent arrest