A Polish woman found stuffed inside a suitcase in London was ‘afraid’ of the Lithuanian boyfriend now being hunted by British police in Europe after her murder, an extraordinary video unearthed by MailOnline reveals today.

Joanna Borucka, 41, was found dead at Pay And Sleep in Southall, west London, on Friday December 18 after staff reported a ‘foul’ stench from the property – five weeks after she was last seen.

Police are ‘urgently’ looking for Petras Zalynas, 50, who is thought to have left the UK and may now be in Germany with officers ‘working with their European counterparts’ to locate him in connection with her death.

Friends have said that ‘kind and gentle’ Joanna fell in love with Zalynas after she fell ill with sepsis, lost her home and business, moving in with him at the hostel. ‘But he was a bad guy – sometimes he hit Joanna’, the friend said.

Zalynas nickname is Arturas, which is what people in the hostel knew him as.

MailOnline has unearthed a video of Joanna cooking for her lover and two friends in the hostel over Easter last year, six months before she was murdered.

Wearing a favourite head-scarf, she tells the man not to film her as she prepares a traditional egg soup she had made in the Ealing restaurant she had run before becoming unwell.

In the video Zalynas waves at the kitchen and the man behind the camera says: ‘She is a bit scared, when you waved a little’. Joanna can be heard saying in Polish: ‘I’m still afraid of him’. 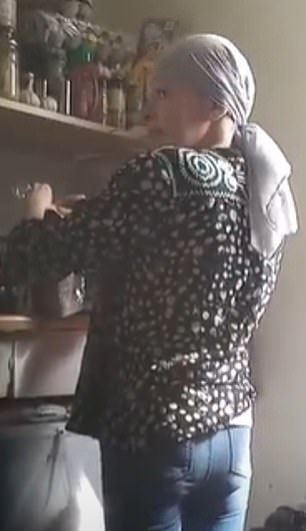 MailOnline has found a video of Petras Zalynas, 50, (left) in a video with Joanna Borucka, 41, (right) who was found dead inside a suitcase. He is wanted in connection with her death 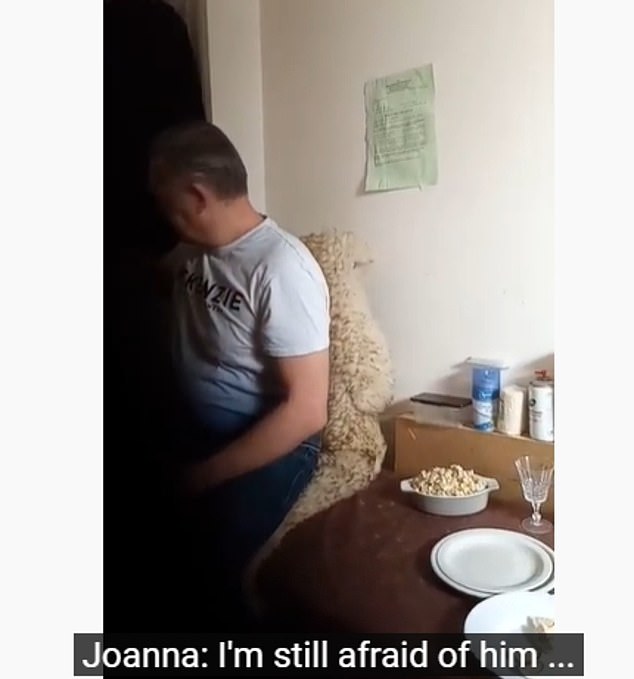 Police are ‘urgently’ looking to speak to Petras Zalynas, 50, (pictured) who Joanna says she is ‘scared of’ in the video 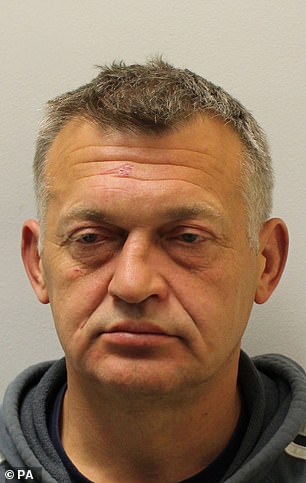 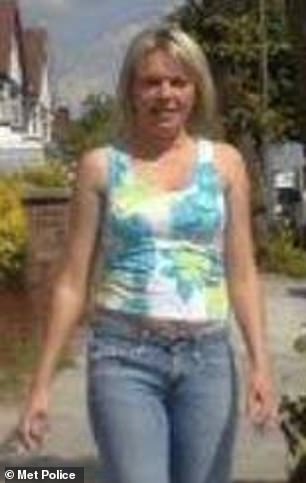 Police are ‘urgently’ looking to speak to Petras Zalynas, 50, after Joanna Borucka, 41, was found dead at Pay And Sleep in Southall, west London, shortly on Friday December 18 after staff reported a ‘foul’ stench from the property

The insider said: ‘At the beginning Joanna and Arturas were friends, he helped her with her homeless issues, then. But they started to become more friendly and had a sexual relationship’. The friend claimed Joanna had loved him but he had beaten her.

A source at the hostel said: ‘Joanna and Petras were a couple as far as I know and had been living here for around nine or ten months.

‘Joanna sometimes wore a bandana and I think she and Petras drank quite a bit.

‘I last saw Petras at the end of last year. He disappeared some time before Joanna’s body was found in a suitcase in her room.’

A member of staff at Singh’s Super Store said that Joanna would pop in every day and buy high strength Perla Mocna Polish beer.

He said: ‘She was a regular customer and would usually buy between five and eight of those cans, depending on how much money she had. They are strong lager – 7.6 per cent.

‘She used to come in by herself, I never saw anyone with her.’

Scotland Yard has today released a photo of Zalynas, which is clearly a police mugshot, but have not said what he was previously arrested for.

Zalynas is believed to have have been Joanna’s boyfriend after hostel residents told MailOnline that he had disappeared around five weeks before she was found dead by a painter and decorator who opened the suitcase two weeks before Christmas.

Investigators believe Ms Borucka was last seen alive on November 13, and the cause of her death is yet to be confirmed. Her friends believe she had gone to Victoria coach station, potentially to get a bus home to Poland. 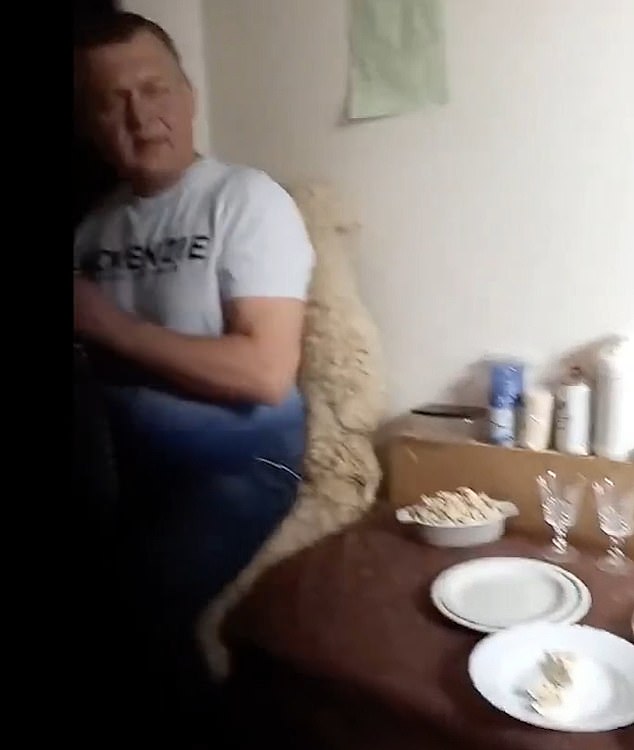 In the video Zalynas waves at the kitchen and the man behind the camera says: ‘She is a bit scared, when you waved a little’

A source at the hostel said: ‘Joanna and Petras were a couple as far as I know and had been living here for around nine or ten months. I last saw Petras at the end of last year. He disappeared some time before Joanna’s body was found in a suitcase in her room’

But painter visiting the hostel a months later opened the suitcase to find the body of a female. His grim discovery followed reports of a ‘really foul smelling odour’.

Detective Chief Inspector Wayne Jolley, of the Met’s Specialist Crime Command, has appealed to ‘London’s Lithuanian community’ who may know where he is.

He said: ‘It is thankfully very rare for a body to be found in these shocking circumstances. I know it makes the news of Joanna’s death all the more difficult for those who were close to her.

‘Our investigation is progressing well. We have identified Petras Zalynas as a person who we need to speak to in order to find out what happened to Joanna.

‘I’m confident there are people out there who may have seen Zalynas or who might know where he is. I would urge them to come forward.

‘I would particularly appeal to London’s Lithuanian community. If you know anything about the whereabouts of Petras Zalynas, please get in touch. You will be supported and your information could hold the key to unlocking this investigation’. 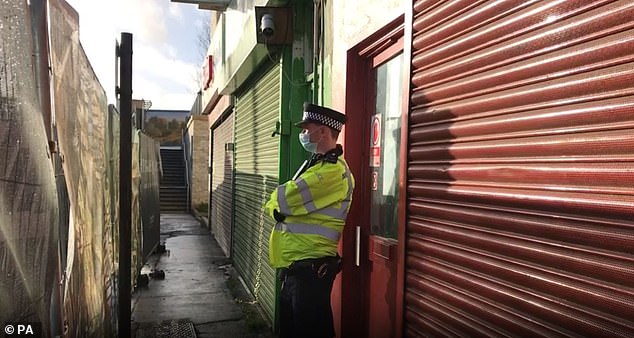 Joanna Borucka, 41, was found dead at Pay And Sleep in Southall, west London, shortly before 3pm on Friday December 18 (pictured after she was found) 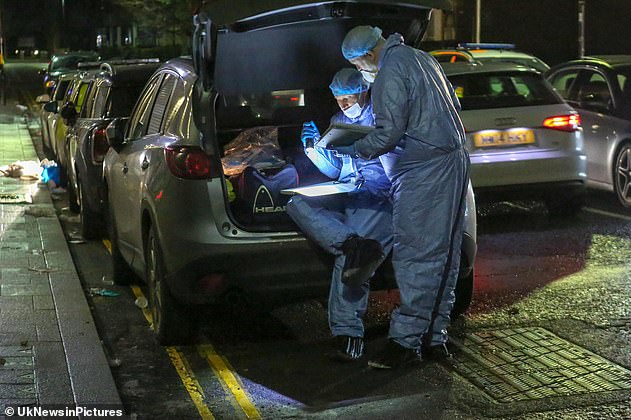 Joanna’s death shocked hostel residents, who said they had known her for around five years.

One resident of the hostel said: ‘She lived in the floor up at the top. We were told by one of the other Polish guys that she’d gone to Victoria coach station,’ she said.

‘No one could get hold of her but now we know why. Her boyfriend has gone missing, because she had someone living in the room with her. We don’t know where he is. She was a lovely girl, she kept herself to herself.’

Another female resident, who wanted to remain anonymous, said: ‘They found a dead woman’s body from a couple of weeks ago stuffed in a suitcase.

‘The guy who had the room has left and hasn’t come back.’

Another resident, Martin, who did not want to give his last name, claimed he had known the woman for ‘about five years’ when he lived in Acton.

‘We had similar friends. Nice girl, very nice and friendly,’ he said. ‘A very good person.’