A holidaymaker was puzzled to return home to find 40kg of potatoes mysteriously dumped on his doorstep – followed by 30kg of carrots days later.

Jordan King assumed the first gift of vegetables outside his home in the Perth suburb of Doubleview was a practical joke by a friend.

But no one came forward in two weeks and he still has no idea who the phantom produce dumper is. Then came the carrots.

‘We had just come back from bit of a trip and found some spuds on our doorstep,’ he told local radio station 6PR.

‘We didn’t think too much of it… thought someone was playing for a bit of a joke, and then yesterday came back and found out someone had dumped some carrots on our doorstep. It’s seriously odd.’

His housemate David Russell said the carrots were dropped off about 2am, and the culprit was still nowhere to be found.

Mr King said he had ‘no idea’ where the vegetables were coming from and planned to put up some cameras to catch the culprit in the act if they returned. 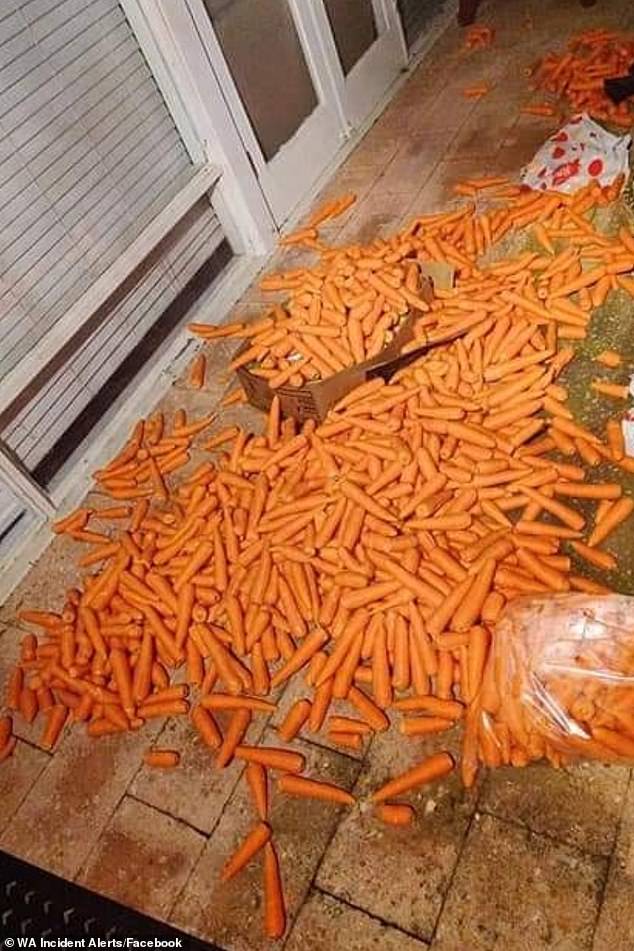 The residents say they do not know who is behind the vegetable dumping, with friends and neighbours pleading their innocence

Friends and neighbours all insisted they were not behind the unusual prank.

The housemates are throwing away many of the vegetables, and feeding some of the carrots to horses at a nearby property.

Facebook users responded with an avalanche of vegetable puns and speculation about why the vegetable villain targeted them.

‘Count your blessings because it’s illegal to be in possession of more than 50kg of potatoes in WA,’ one wrote, siting a bizarre ban dating from 1946 with a fine of up to $5,000.

‘Someone’s dropping the hint you need some extra veg in your diet,’ said another.

The large hordes of vegetables are reportedly mainly being thrown out, with some carrots going to a property with horses nearby