By Adam Shergold for MailOnline

Ollie Robinson is set to be dropped by England for next week’s second Test against New Zealand with the ECB determined to make an example of him after racist and sexist tweets resurfaced.

Despite taking four wickets so far in the first Test at Lord’s, Robinson’s England debut has been overshadowed by the re-emergence of the offensive posts made in 2012 and 2013 when he was 18.

The ECB has launched an investigation into Robinson’s conduct and the bowler faces the prospect of a fine or a suspension.

The Twitter posts, from when Robinson was 18, have overshadowed his England Test debut

Despite apologising to his team-mates in the Lord’s dressing room after the tweets emerged on Wednesday, Robinson is set to be axed for next Thursday’s second Test at Edgbaston.

ECB chiefs, including CEO Tom Harrison, are keen to announce sanctions as soon as the game is over to underline their zero-tolerance policy against all forms of discrimination.

Embarrassingly for cricket chiefs, the tweets came to light hours after England and New Zealand players stood in a ‘moment of unity’ against all forms of discrimination in the game before the first day’s play.

Robinson, 27, was oblivious to the fuss until he left the field on Wednesday but apologised to the team and said he would take responsibility for his actions. 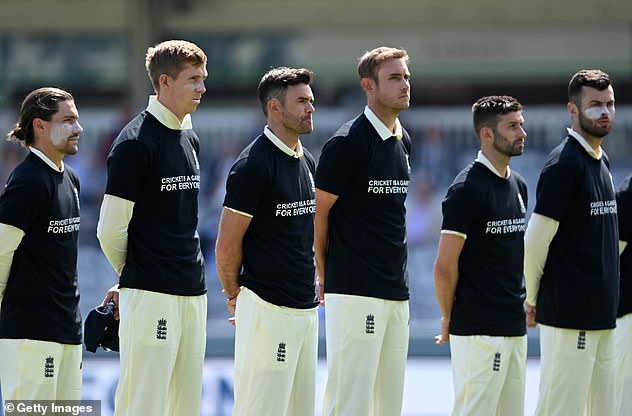 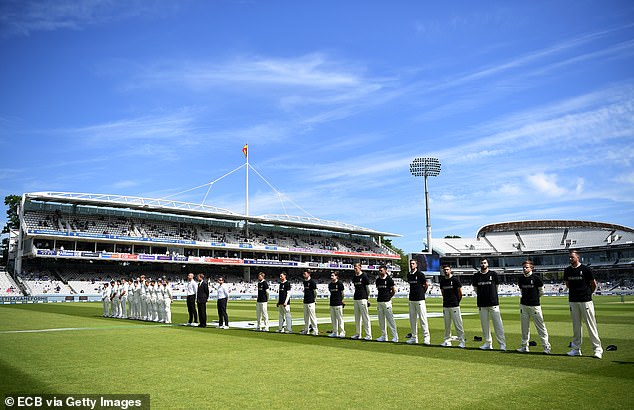 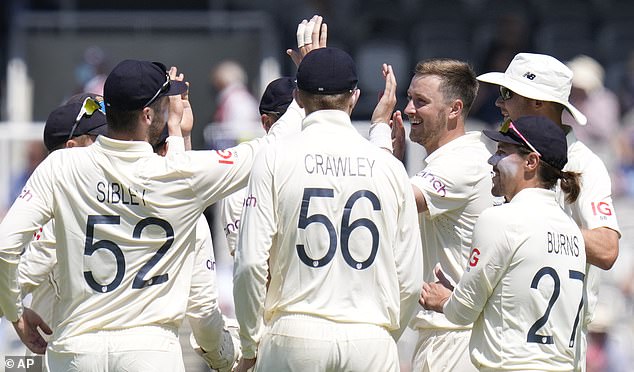 The scandal overshadowed a successful debut for Robinson, who took four wickets

‘I want to make it clear that I’m not racist and I’m not sexist,’ Robinson said in his public apology. ‘I deeply regret my actions, and I am ashamed of making such remarks.’

He returned strongly on Thursday, taking a catch and then another wicket to return first innings figures of 4-75, the pick of the England bowlers.

England are likely to carry out due diligence on the social media of players entering their set-up in the future. There is currently no protocol in place to deal with historic social media posts.

While ECB insiders are adamant the ultimate responsibility lies with the player himself, they also feel they might have done more to avert a situation in which the nine-year-old posts of a debutant were allowed to undermine their strong anti-discrimination message.

Former England captain Michael Vaughan was stunned the ECB had not completed any kind of due diligence.

‘I’m staggered that the ECB don’t do their due diligence on everything – by everything I mean if you are going into partnership with anyone or a brand, you do your due diligence in making sure you know everything about them,’ Vaughan told BBC’s Test Match Special.

‘They haven’t done that on Ollie Robinson. I don’t think this gets put to bed easily because what he has tweeted is out there.

‘A few weeks ago, surely England would have known that Ollie Robinson was in their thoughts. You have to go through everything. These days on Twitter, social media it’s all there for everyone to see.

‘You can’t suddenly – why didn’t they delete it – that’s irrelevant. He tweeted what he had tweeted in 2012.

‘Yes, he was 18 but I do find that staggering that the ECB with everything, the resources that they have in their operation, they don’t go through everything about every player that you pick just to make sure you have got everything covered.’