Police on the Greek island of Lesbos have begun an operation to rehouse thousands of homeless migrants at a new site after their camp was destroyed by fire, according to an AFP journalist.

At around 7am on Thursday, officers were waking people, most of whom are refugees, in their tents to take them to the temporary camp that was hastily set up after the fire on 8 September.

Quietly, with only the sounds of children crying, they folded their blankets, picked up bags containing whatever belongings they had saved from the fire and dismantled their tents.

Women and children with bundles on their backs were seen gathering at a barricade police had set up on the road.

Doctors Without Borders (MSF), which opened an emergency clinic in the area, was barred from accessing the facility during the night, as rumours of the police operation spread, the group said early Thursday.

“A police operation is underway to take refugees to the new camp. This should not prevent medical aid,” MSF said on Twitter.

BREAKING: This morning our team is blocked from accessing the new @MSF #Lesbos clinic by the Greek police. A police operation is ongoing to force the refugees to the new camp. This should not obstruct the provision of medical care! https://t.co/NvS3Q36YaK

Over 12,000 people, including entire families with elderly and newborns, were left homeless when Europe’s largest camp for asylum seekers at Moria burned down on the night of 8 September.

Six young Afghans have been arrested in connection with the incident, with four of them brought before a Lesbos magistrate on Wednesday.

Thousands have been sleeping under tarpaulins or tents at roadsides and in the car parks of closed supermarkets.

The Greek migration ministry said on Tuesday that around 1,200 had entered the new camp.

But many have refused to go, fearing they would be left waiting for months to have their requests for asylum processed and transferred to the Greek mainland or to another European country. 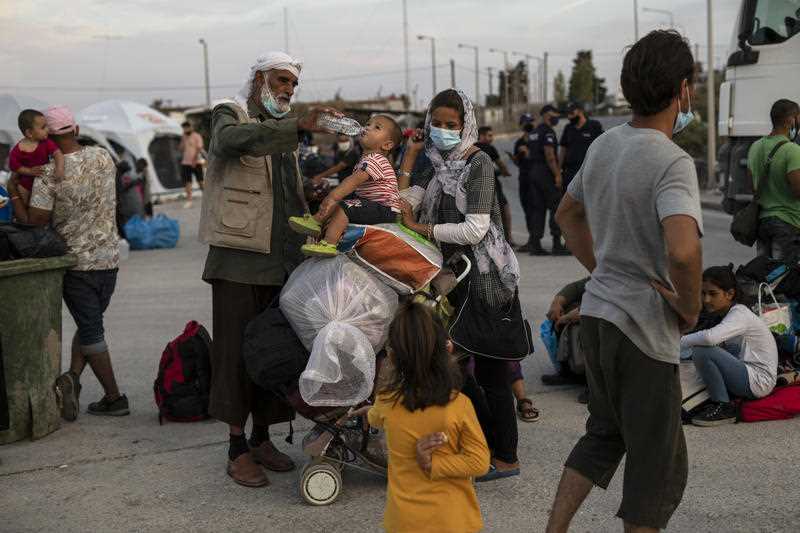 An Afghan man gives water to a child as refugees and migrants from the destroyed Moria camp wait to enter a new temporary camp, on the island of Lesbos.

The UN refugee agency on Wednesday urged Greece to speed up asylum processes on Lesbos.

“The idea is not that people remain forever on the island of Lesbos, but that processes are accelerated so that people can leave gradually and in an orderly way to capital Athens or elsewhere on the mainland”, the UN agency’s chief in Greece Philippe Leclerc told reporters.

Greece’s police minister Michalis Chrysochoidis this week said that “half” the migrants on Lesbos should be able to leave “by Christmas” and “the rest by Easter”.