A ringleader of the M25-blocking eco-group Insulate Britain does not have insulation in his own home, according to reports.

Mr Norton, an electrician, is one of the leading figures in Insulate Britain – an Extinction Rebellion off-shoot campaigning the Government to reduce home heating emissions to zero.

The group infuriated motorists three times last week by blocking the M25 in a bid to put pressure on the Government to pay for all social housing to be fully insulated.

Mr Norton’s property is owned by a housing association.

Mr Norton told the Sun: ‘This is a good example of one of Britain’s leaky homes and why we need the Government to get on with the job.’

MailOnline contacted Insulate Britain for a comment, but has so far not received a response. 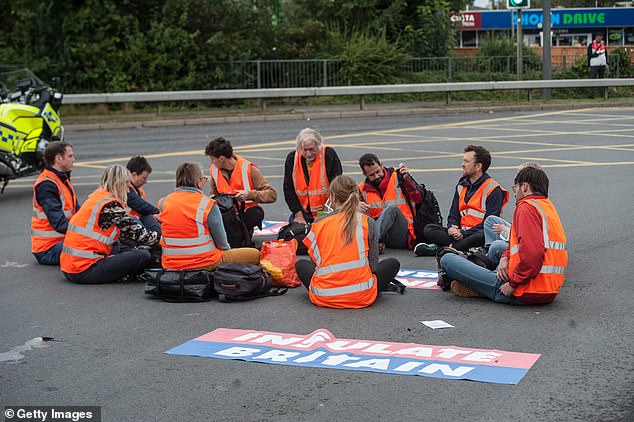 Mr Norton, an electrician, is one of the leading figures in Insulate Britain – an Extinction Rebellion off-shoot campaigning the Government to reduce home heating emissions to zero. The group infuriated motorists three times last week by blocking the M25 in a bid to put pressure on the Government to pay for all social housing to be fully insulated

The mastermind of the Insulate Britain group that has blocked the M25 three times this week is vowing to humiliate Boris Johnson at the UN climate conference.

Roger Hallam is prepared for hundreds of activists to end up behind bars during the Cop26 summit in Glasgow in November.

The co-founder of Extinction Rebellion told his supporters: ‘The whole world’s going to be looking at Johnson and saying “You’re Mr Green and you’ve got 200 people in prison because they want you to insulate some houses?” It’s not going to look good.’

He laid out his masterplan for ‘sacrifice and disruption’ in a video released in July as he toured the UK looking for up to 300 activists prepared to go to jail. 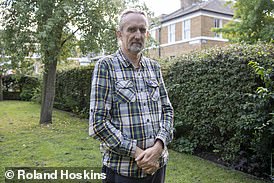 ‘The activists will block other motorways,’ he said yesterday. ‘They will block roads. They will go on hunger strike.

‘They will do all the things that have happened before in British history. If the Government doesn’t take a lead, then there will be massive social unrest.’

Mr Hallam set up his splinter group when he caused a rift within Extinction Rebellion over comments he made about the Holocaust.

He told a German newspaper it ‘was just another f***ery in human history’ – but later said the remark was taken out of context from ‘three seconds’ of argument.

Sources close to Mr Hallam, an organic farmer who lost his business because of severe weather, said he would ‘keep escalating’ his demonstrations to ‘grab the headlines’ from other activists.

Last week the group infuriated motorists by blocking the M25 on three separate days as part of a protest.

Members of the group sat, and some even glued themselves to the road, causing huge delays for drivers

As many as 80 activists from the Insulate Britain group brought the motorway to a half on Monday, Wednesday and Friday, while also shutting down the M3 and M11.

Police chiefs came under intense pressure for the way they tackled the protests and Priti Patel summoned Met Commissioner Cressida Dick and other force bosses responsible for the M25 after they failed to drag away protesters ‘immediately’.

Shocking video emerged showing an officer stopping traffic to allow protesters onto the motorway earlier this week, with the Met saying he was trying to keep the activists ‘safe’.

The anger at the police’s handling of the situation was increased after photos emerged showing some protesters attending all three demonstrations, despite being previously arrested.

Now, senior officers from Hertfordshire, Surrey, Kent, Essex and the Met are considering charging the activists with more serious crimes to ensure they are deterred from further protests.

Conspiracy to cause public nuisance, which carries a maximum penalty of five years in prison, is thought to be one of the punishments considered.

One police source told the Telegraph: ‘The disruption involved massively outweighs the offence and the protesters are well aware of that. Most of those involved have been arrested on suspicion of blocking the highway, which is a relatively minor offence.

‘Even if these cases reach the charging threshold for the Crown Prosecution Service (CPS) and it goes to court, the sentences available on conviction are very small. As we saw with some of the Extinction Rebellion protesters, they walk away with conditional discharges, which ends up encouraging others to take similar action.’

It comes after the Home Secretary held an emergency Zoom call with police chiefs after protesters from Insulate Britain shut down the UK’s busiest road during rush hour every 48 hours this week and made officers ‘look like idiots’, one Tory MP said.

The enviro-zealots even warned officers they would do it again after being released without bail conditions on Monday and Wednesday – with Hertfordshire Police defending the decision not to charge them claiming they still need time to ‘gather evidence and build a case’ despite arresting dozens of them in the middle of the M25.

A spokesman for the Association of British Drivers said: ‘The police have failed to do their duty. It’s time for Chief Constables to decide whose side they’re on. The actions of these people is an absolute bl**dy disgrace. 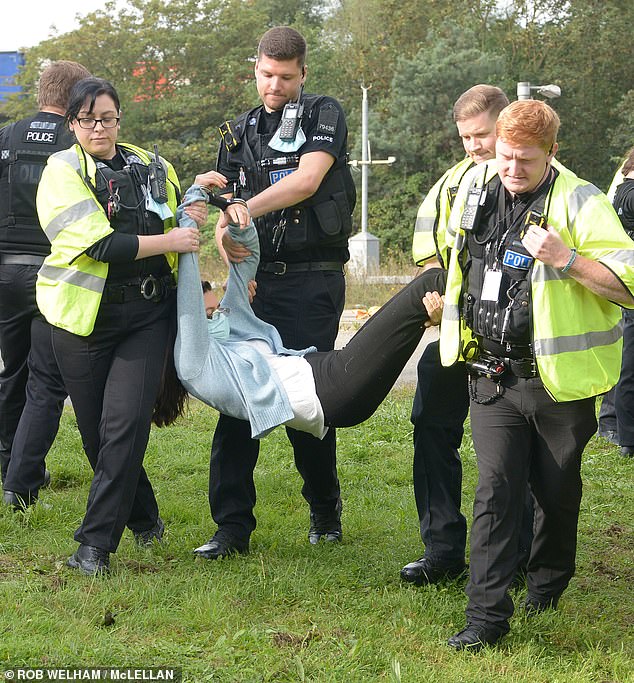 An Insulate Britain activist is dragged off the M25 at Brentwood, Essex as they managed more protests on Friday

‘They should be locked away. I’m appalled about why they have been released on bail with no restrictions. Not only have police not arrested these people for proper offences – they’ve not charged them with anything at all’.

A source close to the Home Secretary told MailOnline that at a Friday summit with police chiefs she reiterated her message that ‘these people are breaking the law and must be removed immediately’.

The insider did not go into what was discussed about the M25 – and how they would break the cycle of protests – for ‘operational reasons’. But said: ‘The British public does not expect the police to be standing by while protesters disrupt people’s daily lives.’

Tory MP for South Thanet, Craig Mackinlay MP, said: ‘I am surprised that the Metropolitan Police Commissioner has not advised her officers to make use of one of numerous possible legal provisions to prevent, remove, arrest and charge the activists within Insulate Britain, Extinction Rebellion and other anarchist groups causing mayhem to the law-abiding public simply trying to go about their normal activities and costing millions in lost business and valuable police time.’

One Tory backbencher told MailOnline: ‘Priti’s tough talking isn’t enough. These protesters are making the police look like idiots and the buck stops with the Home Secretary and her chief constables’.

Ms Patel is under growing pressure with some drivers taking to social media demanding she ‘sorts this mess out’ or resigns. Others said Boris Johnson should sack her if police continue to ‘fail to keep roads open’.

Priti Patel had ordered police to take ‘decisive action’ against the ‘selfish’ eco-protesters and described the ‘guerrilla tactics’ of Insulate Britain as ‘completely unacceptable’.