The BARMIEST of the Barmy Army! England cricket fan belts out ‘Jerusalem’ on Galle’s iconic fort as he watches first Test after travelling to Sri Lanka last MARCH to watch series then never leaving during the pandemic

England fan Rob Lewis caused a stir before the first Test in Sri Lanka as the Barmy Army member belted out the words to ‘Jerusalem‘ before being kicked off Galle’s iconic fort by police!

The 37-year-old – a web designer from Surrey – travelled out to Sri Lanka last March for the original Test series before it was cancelled due to the COVID-19 pandemic.

Yet Lewis stayed out in Sri Lanka in the hope that Joe Root’s team would tour soon and, 10 months later, his patience was rewarded and he was videoed signing the iconic England cricket anthem on his own. 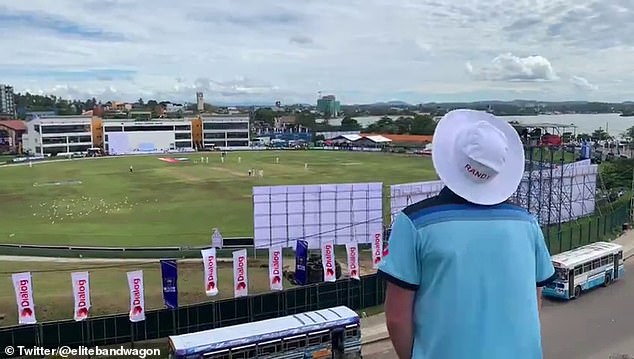 Lewis belted out the words to ‘Jerusalem’ on his own – before police said he couldn’t stay!

‘I’ve been in Sri Lanka the whole time on blind faith, on a wing and a prayer,’ Lewis told The Timeson Wednesday.

‘I thought, “Oh, this coronavirus will be a month. I’ll stay in for that month and then see what happens.” But it rumbled on… there’s never been a point where I thought I should go home.’

Lewis has been able to financially support his stay in Sri Lanka since March and was hopeful, pre-match, of being able to watch the whole Test from the fort.

He said on Twitter on Thursday that he had spent all morning putting up banners, before local police arrived and told him to take them down and leave.

However, should he have witnessed any action, he would have been pleased with what he saw as England took three early wickets in the morning session. 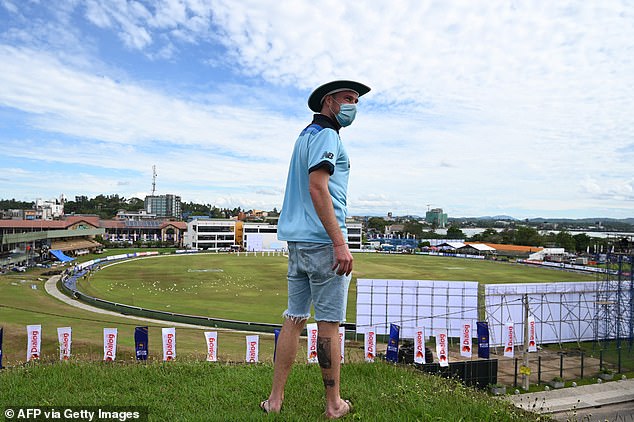 ‘I could get annoyed about the money I spend on rent back home,’ Lewis told AFP yesterday. ‘But it’s offset by the cheaper cost of living here.

‘Lucky enough, because it is Galle, we have the beautiful fort to watch (from).

‘I’m going to print a few hymn sheets out and try and get as many people to help me sing “Jerusalem” as possible.’