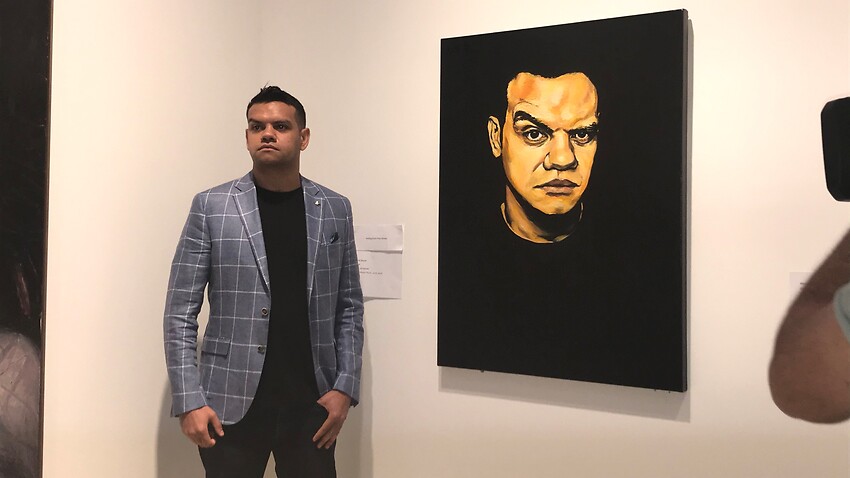 For almost a century, an Indigenous artist has never won any of the prizes on offer in the prestigious Archibald Prize, until now.

Wongutha-Yamatji artist was awarded the 2020 Archibald Packing Room Prize for his self-portrait Meyne on Thursday.

The Packing Room Prize – a cash prize of $1,500 – is awarded to the best entry in the Archibald Prize as judged by the Art Gallery of New South Wales staff who receive, unpack and hang the entries.

The shortlist for the main Archibald Prize was announced on Thursday and the winner will be announced on 25 September.

The West Australian-born, Sydney-based artist, writer and actor is a well-known face in Australia and made headlines in June when he performed a powerful four-minute-speech from his play City Of Gold on the ABC’s Q&A program.

He told the media he only entered the Archibald Prize because of his mum.

“I want to thank the Art Gallery of New South Wales, their staff, [head packer] Brett Cuthbertson and the Packing Room team. Most of all I want to thank my mum, who encouraged me to enter the Archibald Prize in the first place and gave me the courage to be so bold,” he said.

“In a way, that is the essence of the painting and what it reflects – to be bold.”

Wyatt’s painting was selected as one of 55 finalist works from a record number of entries received for the Archibald Prize.

“Being a finalist for the Archibald Prize was a pipe dream, let alone being awarded the Packing Room Prize. I am absolutely ecstatic and truly humbled by this wonderful honour,” Wyatt said.

It is the first time Wyatt has ever entered the Archibald Prize, and he told SBS News he hopes his win will inspire other Indigenous artists.

“I think it’s pretty incredible that I have been the first Indigenous artist because I think there’s a lot of artists that have come before over that 99 years, but I suppose our art and culture has been here for over 60,000 years. This is just a little speck,” he said.

“The Archibald Prize, it’s a cool thing, but hopefully it opens the door for many more Indigenous artists being awarded these prizes.”

After 39 years working at the gallery, head packer, Brett Cuthbertson holds 52 per cent of the vote for the Packing Room Prize.

“When Meyne came into the gallery to deliver his entry he said he hadn’t painted in some time and the work was just a COVID project. I loved the story and was really impressed with the result,” he said.

The top Archibald Prize has still never been awarded to an artist from a non-European background and Wyatt said the art world needs to diversify.

“I think the opportunities are there and those opportunities need to be capitalised on because the work is there, and the artistic integrity is there as well. I think going forward hopefully this does open doors,” he said.

His mother Susan Wyatt is also an artist and was a finalist in the Archibald Prize in 2003 for her portrait of writer Doris Pilkington (Nugi Garimarra).

Works by Indigenous artist have been recognised in other awards by te gallery, including the Sulman Prize for genre work and the Wynne Prize for landscape, but they are not to be confused with the top Archibald Prize and the Packing Room Prize.

In 2016, the Sulman Prize was won by Pitjantjatjara artist Kaylene Whiskey, and for the past four years the Wynne Prize has been awarded to an Indigenous artist or collective.

The Archibald Prize exhibition is open to the public from 26 September to 10 January 2021 at the Art Gallery of New South Wales.