British firm Skyrora Is a step closer to launching a space tug that could tow satellites into different orbits, replace old satellites and even clean up space junk.

The upper stage of the Skyrora XL rocket successfully completed a crucial static fire test at the engine development complex in Fife, Scotland just before Christmas.

This upper stage of the rocket doubles as a ‘ mission-ready Orbital Transfer Vehicle (OTV)’ that can perform a number of in-space missions after delivering its payload.

Edinburgh-based Skyrora hope that by the end of next year, or early 2023, they will be able to launch the OTV, along with small satellites it can carry inside it, on top of the XL rocket from one of Scotland’s spaceports.

They say that this is a huge step for the UK space sector as it will allow them to provide in space services, as well as launching satellites from British soil.

On December 23, the Skyrora test and flight operations team performed one of their most important test campaigns to date, a full upper stage static fire test.

The engine is burnt for 450 seconds over the course of three firings and it involved a fully-integrated setup of the engine, feed systems, avionics, and flight software.

The vehicle will be able to deliver payloads into orbit – and once in space can carry out multiple missions, including replacing redundant satellites or removing junk.

Skyrora CEO, Volodymyr Levykin, said; “Our goal was always to be mission ready once all the regulations and permissions were in place, and this development not only brings us closer to that point but also takes us beyond simply launch readiness.

‘We have been deliberately quiet about this aspect of our Skyrora XL launch vehicle as we had technical challenges to get it to this stage and we wanted to ensure all tests had a satisfactory outcome, which they now have.’ 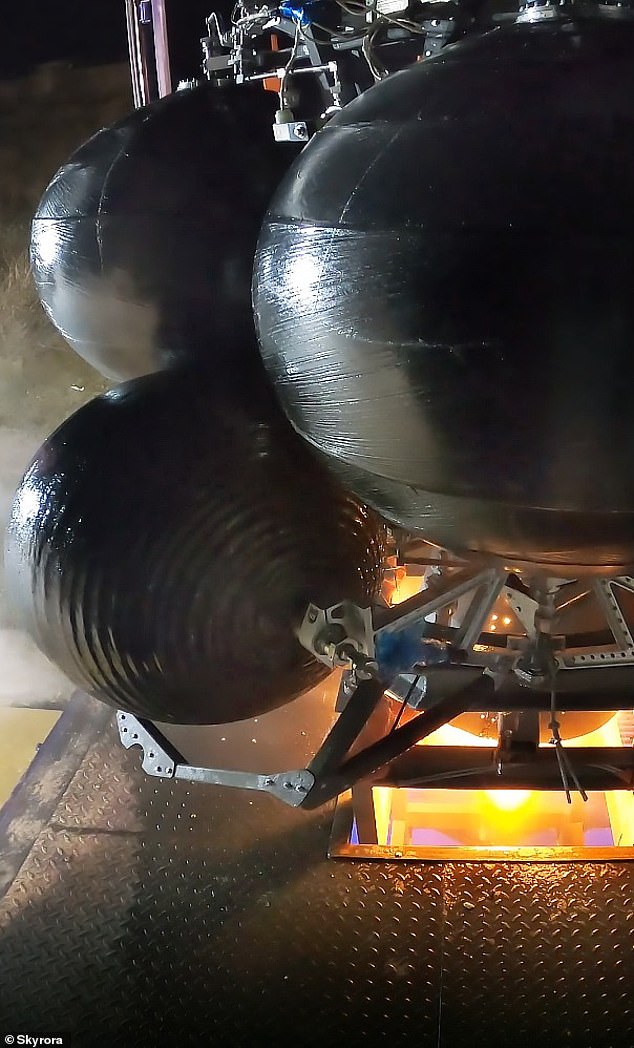 The engine is burnt for 450 seconds over the course of three firings and it involved a fully-integrated setup of the engine, feed systems, avionics, and flight software

He said in the current climate there was a real shortage of good news, so they wanted to make sure it was working properly before sharing it with the world.

‘It’s important to show that even in challenging times we are still a nation that continues to innovate and take the lead in some lofty ambitions,’ Levykin said.

With OneWeb looking to launch over 600 smallsats, and SpaceX looking to build a Starlink constellation of 42,000 satellites, there will be as much demand for in-space operations as there will be for launch services, Skyrora believe.

To date the company has executed a rigorous series of engine tests, but this latest exercise involved a fully-integrated setup.

This included the engine, the flight-weight structure and feed systems, flight-grade avionics and the full flight computer software which will be used in the first flight of Skyrora XL – at some point next year or early 2023.

The test was of the flight software and vehicle structure, as the vehicle performed a full set of engine burns and manoeuvres that simulate the flight of the upper stage in orbit above Earth.

Passing this test puts Skyrora one step closer to the completion of their XL vehicle.

The OTV has the ability to refire its engine several times allowing it to conduct multiple missions during a single trip, making it highly configurable.

“The Skyrora upper stage is a historic first not just for the company, but for the UK Space industry, as it is the first “mission ready” vehicle of its kind to be developed in the country,’ said Skyrora Head of Engineering, Dr Jack James Marlow.

Back in the mid-1980s, several studies were done into the development of an Orbital Manoeuvring Vehicle (OMV) – sometime dubbed a ‘space tug’. 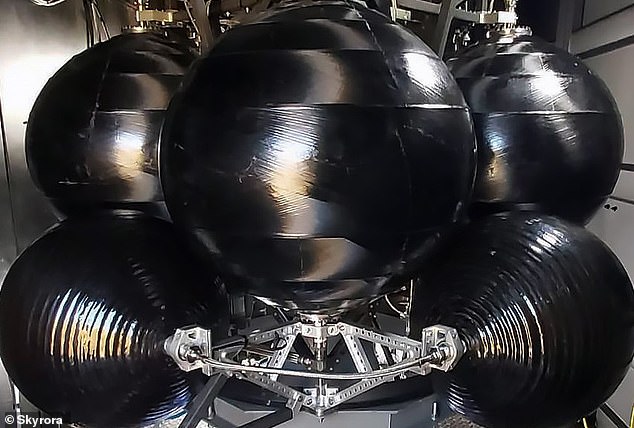 With OneWeb looking to launch over 600 smallsats, and SpaceX looking to build a Starlink constellation of 42,000 satellites, there will be as much demand for in-space operations as there will be for launch services, Skyrora believe

The idea gained little traction due to the limited numbers of launches at the time, but the appetite for such a vehicle has been gaining strength in recent times.

This is in part due to the privatisation of the space launch sector, making it cheaper and easier to get objects into orbit.

In 2018 Spaceflight Inc. launched the Sherpa OMV onboard a Falcon 9 rocket, and in October 2019 a US consortium headed up by Northrop Grumman launched their “Mission Extension Vehicle” into orbit from Kazakhstan.

The spacecraft was used to reposition an existing satellite into a new orbit, allowing it to extend its mission length by another four years-reducing the number of required launches to replace it.

The Skyrora upper stage, once in orbit, can navigate to a wide variety of orbits and make multiple stops – performing a number of functions during its journey. 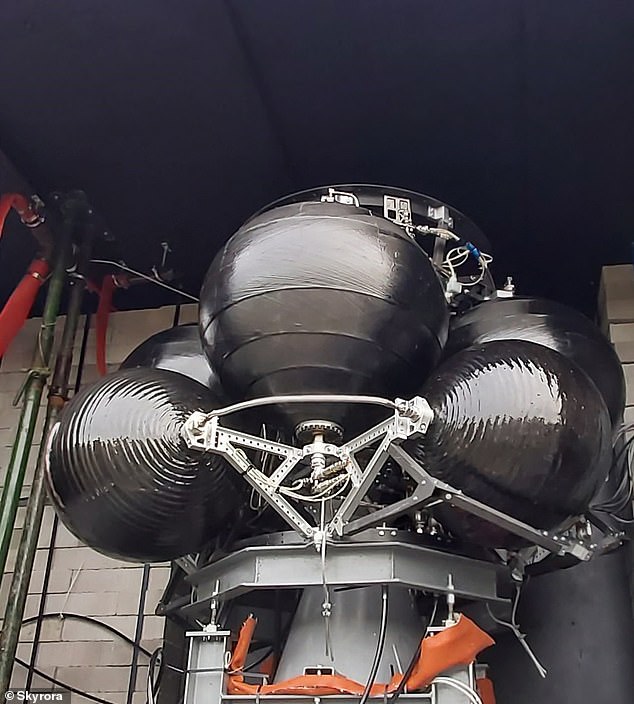 The vehicle will be able to deliver payloads into orbit – and once in space can carry out multiple missions, including replacing redundant satellites or removing junk

This represents a paradigm shift in in-orbit operations, Skyrora boasted.

‘Having a last-mile orbital delivery service, which can drop off numerous satellites into various orbits, move satellites from one orbit to another or perform a variety of maintenance tasks, is revolutionary to the UK/EU Space Industry.’

It would give the UK the ability to remove space junk, launch Earth monitoring satellites and even maintain existing in-orbit satellites without multiple launches.

‘With several missions being achieved by one single rocket launch, Skyrora optimise each launch while minimising any impact on the local environment,’ they wrote.

‘This is coupled with the use of eco-friendly fuel, Ecosene, powering the vehicle to ensure the UK has the most environmentally friendly space industry in the world.’

WHAT IS SPACE JUNK? MORE THAN 170 MILLION PIECES OF DEAD SATELLITES, SPENT ROCKETS AND FLAKES OF PAINT POSE ‘THREAT’ TO SPACE INDUSTRY

There are an estimated 170 million pieces of so-called ‘space junk’ – left behind after missions that can be as big as spent rocket stages or as small as paint flakes – in orbit alongside some US$700 billion (£555bn) of space infrastructure.

But only 22,000 are tracked, and with the fragments able to travel at speeds above 16,777 mph (27,000kmh), even tiny pieces could seriously damage or destroy satellites.

However, traditional gripping methods don’t work in space, as suction cups do not function in a vacuum and temperatures are too cold for substances like tape and glue.

Grippers based around magnets are useless because most of the debris in orbit around Earth is not magnetic.

Around 500,000 pieces of human-made debris (artist’s impression) currently orbit our planet, made up of disused satellites, bits of spacecraft and spent rockets

Most proposed solutions, including debris harpoons, either require or cause forceful interaction with the debris, which could push those objects in unintended, unpredictable directions.

Scientists point to two events that have badly worsened the problem of space junk.

The first was in February 2009, when an Iridium telecoms satellite and Kosmos-2251, a Russian military satellite, accidentally collided.

The second was in January 2007, when China tested an anti-satellite weapon on an old Fengyun weather satellite.

One is low Earth orbit which is used by satnav satellites, the ISS, China’s manned missions and the Hubble telescope, among others.

The other is in geostationary orbit, and is used by communications, weather and surveillance satellites that must maintain a fixed position relative to Earth.