Parts of Britain will enjoy the warmest day of the year so far today with temperatures soaring as high as 64F (18C) in the South – but the North remains on high alert for flooding after three inches of rain in 24 hours.

The UK highs are expected today in Norfolk and Cambridgeshire, well above the current 2021 record of 60.6F (15.9C) set on Sunday, while central and South East England including London are set to reach 59F (15C).

Today’s predicted maximums are significantly above the UK average daily high for February, which is 43.9F (6.6C), and come as the sky glowed a deep orange at sunrise again today thanks to Saharan dust blown north from Africa.

The mercury at 8am today was already at 54F (12C) in Preston, 52F (11C) in Bristol and 50F (10C) in Inverness, County Armagh and North Wales – the sort of temperatures normally seen as maximums for the time of year.

The high temperatures, which come ten days after Britain faced ice, snow and sub-zero temperatures, could even be above the average maximum for May, which is 58.6F (14.8C) for the UK and 60.4F (15.8C) for England.

But northern England and Scotland face more heavy rain, after Keswick in the Lake District had nearly three inches (75mm) in the 24 hours until sunrise this morning, with more expected today. 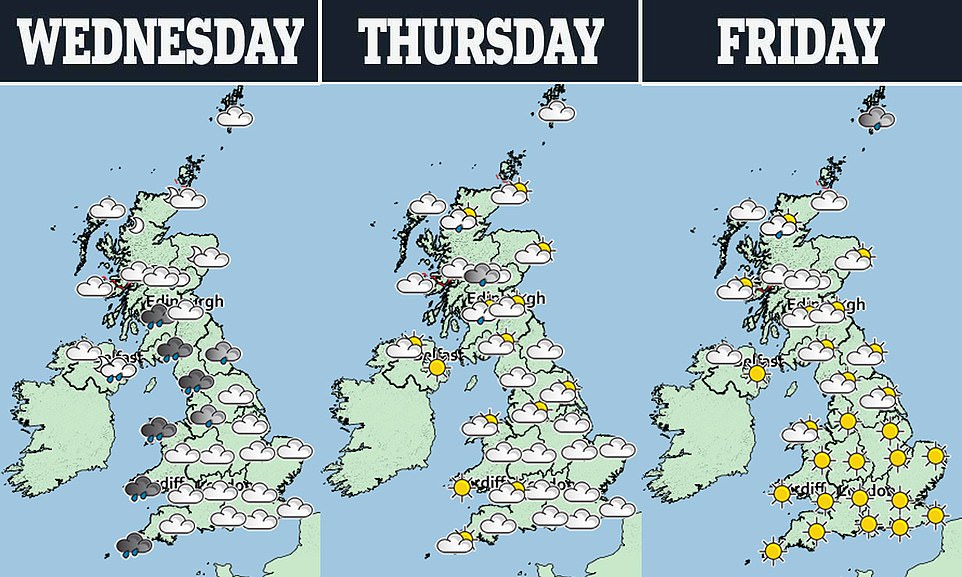 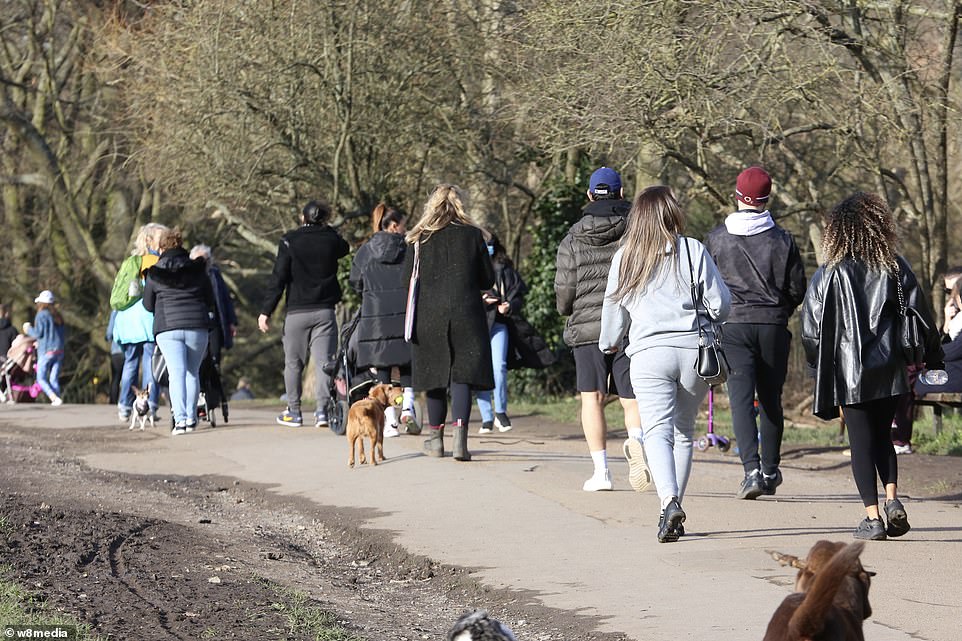 The Met Office has issued two weather warnings for downpours in North Wales, running until 6pm today, and Cumbria, running until 8pm – as up to 3.5in (90mm) is expected to fall across those two areas. 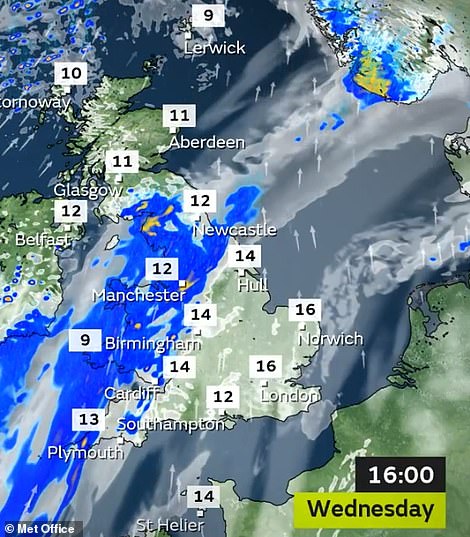 The South will enjoy mild weather while the North faces rain

The rain is forecast to move down across the UK from late today into tomorrow, but is likely to clear by Friday – and more fine weather is predicted for the end of the week, with sunshine and further mild temperatures.

Met Office forecaster Oli Claydon said: ‘A few days of milder temperatures are forecast. It will be a noticeable change from what we’ve had in recent weeks. It will feel more like spring, especially in the sunshine.

‘Through the week we’re into double figures [in Celsius] for many places, including parts of Scotland.’

BBC weather presenter Carol Kirkwood said it was ‘very mild for late February’, adding that parts of the country ‘could see 17C (63F), possibly even 18C (64F) in any prolonged sunshine, in some eastern areas’ today.

Many spring flowers are already blooming as much of Britain enjoys the warm sunshine, with stunning arrays of snowdrops, carpets and crocuses and golden daffodils in full bloom across the country. 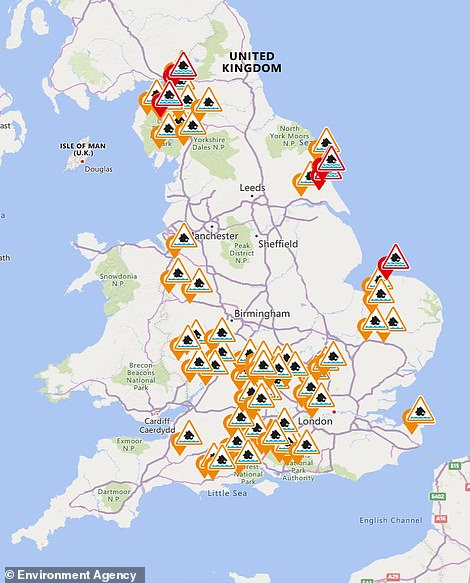 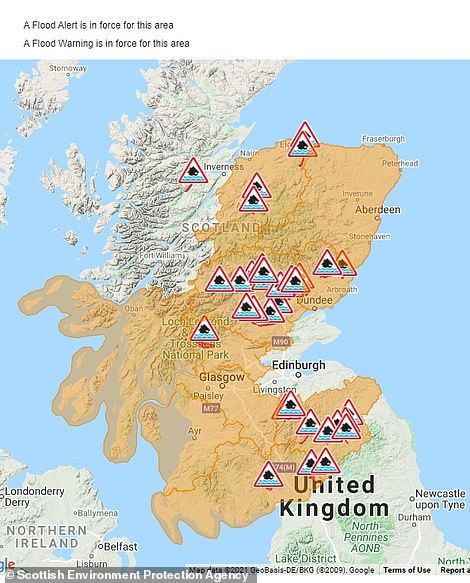 There are 63 alerts and nine warnings in place for England (left), and ten alerts and 38 warnings across Scotland (right)

In Scotland, strong winds have been causing problems, with many Caledonian MacBrayne ferry services cancelled due to adverse weather while the Tay Road Bridge was closed to double decker buses due to high winds.

Gusts of 50mph to 60mph and up to 70mph for the Western Isles and the Moray coast were expected overnight, with Police Scotland urging people to plan ahead if they had to travel.

Transport Secretary Michael Matheson said: ‘The Met Office is telling us to expect another period of difficult weather, with heavy rain and strong winds forecast for much of Tuesday and Wednesday this week.

‘The current Covid restrictions mean you should only be leaving your home for an essential purpose, so please consider if your journey is absolutely necessary before setting off.’

How does Saharan dust make its way towards Britain? 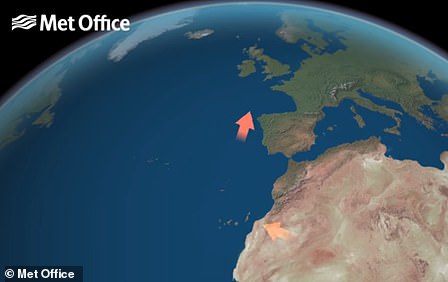 Saharan dust is a mixture of sand and dust from the desert in North Africa. Winds can blow fiercely over the area which whips up dust and sand into the sky, and this could be carried to Britain if winds in the upper section of the atmosphere are blowing north.

The dust can fall to the ground over the UK with rain, which collects it on the way down. When this lands on something and evaporates, it leaves a layer of dust.

The process often occurs several times a year when big dust storms in the Sahara happen at the same time as southerly wind patterns over Britain.

The dust can also affect air pollution, with Defra warning on Monday of an ‘increased chance of pockets of moderate air pollution’ in the South East England due to the latest plume – although this risk has now passed.