Up to 200 anti-vaxxers storm ITN’s London HQ: Angry mob occupy lobby and demand to speak to bosses after chasing Jon Snow while hurling abuse at him and ordering staff to ‘get me Peston’

By Bhvishya Patel For Mailonline

Hundreds of anti-vaxx protesters have stormed the London headquarters of ITV News and Channel 4 News.

Up to 200 demonstrators have refused to leave the building’s lobby and are demanding to speak to the broadcaster’s bosses as part of a protest against vaccine passports.

The scenes come just moments after crowds of angry protesters hurled abuse at veteran Channel 4 presenter Jon Snow as police officers tried to control the mob outside the studio. 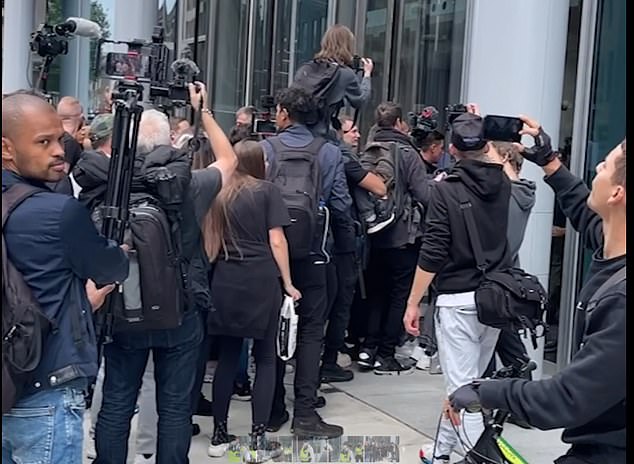 Earlier today footage showed police line up to block off the entrance to the building on Gray’s Inn Road as one protester shouted: ‘They’re coming for our children.’

Meanwhile others were heard hurling abuse at newsreader Jon Snow as he entered the ITN building.

One protester was heard saying: ‘Do the right thing Jon. Come on you’re a man of many words I respect you sir.

‘Jon it’s a real shame you didn’t speak up for the children when you could have.’

The shocking scenes comes just two weeks after anti-vax protesters attempted to storm a studio at the BBC Television Centre in west London.

The Metropolitan Police have said its officers are ‘responding to a demonstration at a private premises on Gray’s Inn Road’.

‘Officers are on scene engaging with building security and removing those who have gained entry,’ the force said.