Vanessa Bryant gushes about how much 13-month-old daughter Capri resembles her father Kobe Bryant: ‘Capri has the leg/calve bend just like her daddy’

By Kevin Kayhart For Dailymail.com

Vanessa Bryant has gushed about how much her youngest daughter Capri resembles her late husband, Kobe Bryant, on social media on more than one occasion.

And on Friday the 38-year-old took to Instagram and made yet another comparison of the pair by posting a photo of her 13-month-old little girl walking just like her father.

‘Capri Has the leg/calve bend just like her daddy, ‘she wrote across the adorable snap. 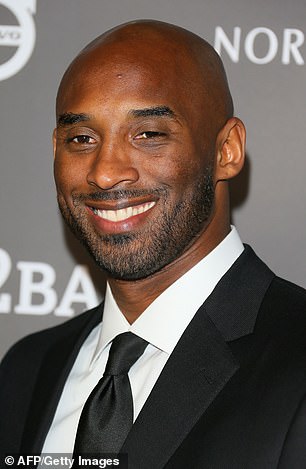 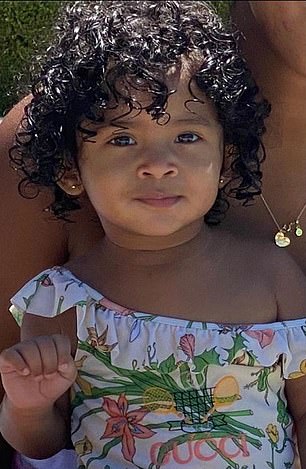 Like father, like daughter: Vanessa Bryant shared about how her 13-month-old daughter Capri resembles her late father Kobe Bryant

In the image, Capri has the exact same cross-over walk, where her feet are close together and pointed inwards, that the legendary Los Angeles Laker star was known for during his NBA playing days.

In celebration of her 38th birthday in early May, Vanessa shared a selfie with Capri while marveling over how much she resembles Kobe.

“Capri looks just her daddy (in Gigi’s outfit)!’ Vanessa wrote in the caption that included a reference to her wearing a dress that was originally worn by her late daughter Gianna. 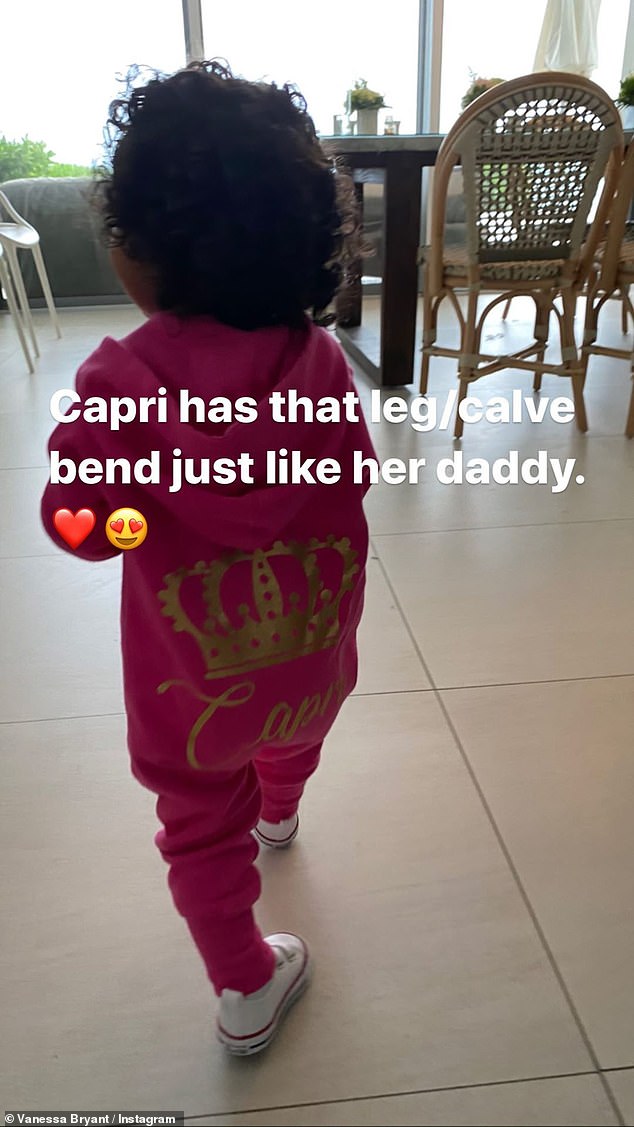 Walk this way: Vanessa Bryant, 38, shared a photo on Instagram Friday, showcasing her daughter’s legs and walk, which is exactly the same as her daddy 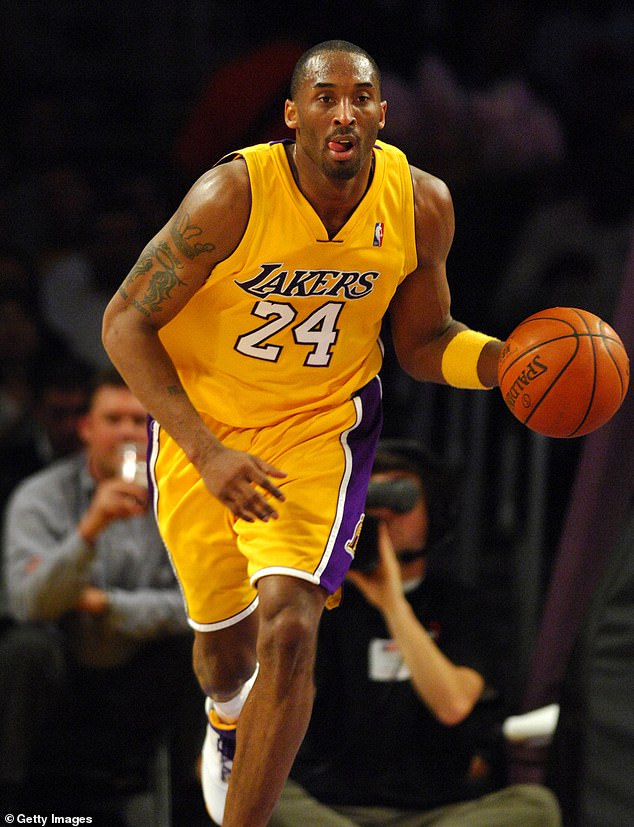 Recognizable: Kobe had been known by family an fans for his cross-over walk, where his feet are close together and pointed inwards

Along with their looks and mannerisms, Capri also shares some names with her famous daddy.

She is often referred to by family and loved ones as Koko Bean; Bean just happens to be Kobe’s middle name.

Plus, the toddler’s middle name is Kobe.

This past June Vanessa celebrated Capri’s first birthday by posting a photo of herself and her late husband staring down at their newborn baby last year.

In the emotional image, the five-time NBA champion cradled their infant daughter in what was her first photo shoot. 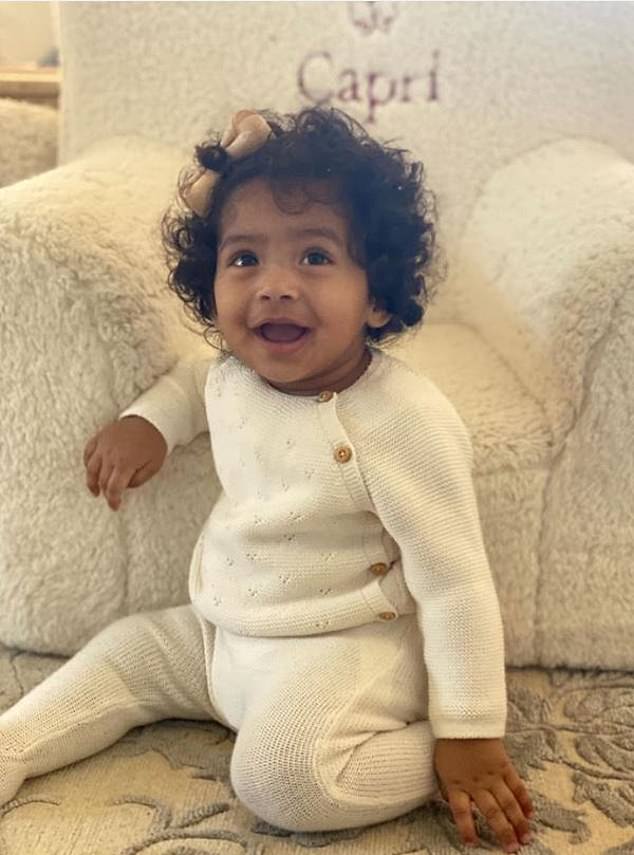 Adorable: Vanessa Bryant has marveled over how much Capri resembles Kobe 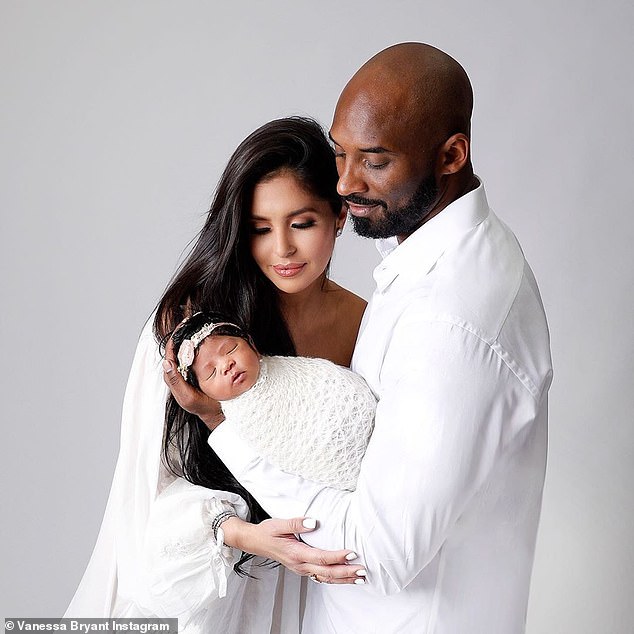 Say my name: Capri also shares some names with her famous daddy: her middle name is Kobe and her nickname is Bean, which is the same as her dad’s middle name

‘Happy 1st Birthday Capri! Mommy, Daddy, Nani, Gigi and BB love you SO much!!!, she wrote in the caption.

‘God Bless you sweet princess. Capri Kobe Bryant a.k.a. “Koko-Bean” named after her dearly missed daddy, Kobe Bean Bryant. We miss you SO much Gigi and Daddy.’

Kobe and daughter Gianna Bryant died on January 26, 2020 when the helicopter they were riding in crashed into the hills in the Calabasas region of Los Angeles.

Seven other people, several of whom were Gianna’s young basketball teammates, also died in the crash. 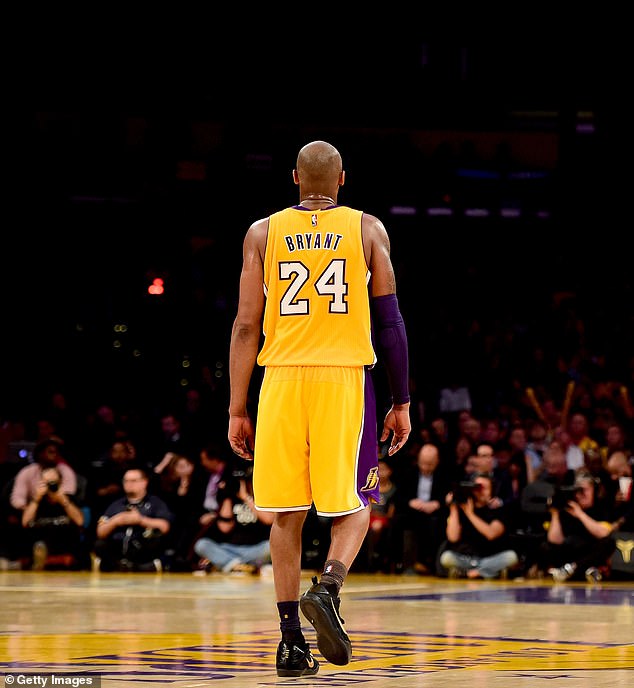 RIP: Kobe and daughter Gianna Bryant died on January 26, 2020 when the helicopter they were riding in crashed into the hills in the Calabasas region of Los Angeles

August 5, 2020
Comments Off on Katie Price arrives back in the UK after breaking both her feet in Turkey

August 8, 2020
Comments Off on Katy Perry shows off her baby bump while dancing alongside car as fiancé Orlando Bloom drives

July 31, 2020
Comments Off on Bachelor in Paradise: Jake Ellis’ father dies after a long battle with ill health

August 5, 2020
Comments Off on BBC responds to complaints after airing same-sex kiss on CBBC drama The Next Step

Dame Barbara Windsor, 82, is moved to a care home amid her battle with dementia

July 31, 2020
Comments Off on Dame Barbara Windsor, 82, is moved to a care home amid her battle with dementia

August 1, 2020
Comments Off on Charlize Theron says she may never ‘be able to live with somebody again’

August 8, 2020
Comments Off on Family time! Jasmine Yarbrough enjoys a stroll with daughter Harper May and lookalike sister Jade

August 4, 2020
Comments Off on Kylie Jenner models a sparkly mini dress with SLIPPERS as she plugs her new Kylie Skin launch