A Virgin Australia flight attendant eating a meal in an aircraft galley suffered a broken leg when a high-speed descent went wrong.

The attendant was one of two cabin crew members injured during a domestic flight from Melbourne to Adelaide in September 2017.

A new Australian Transport Safety Bureau report has found the actions of the captain, a first officer acting as pilot, contributed to their injuries. 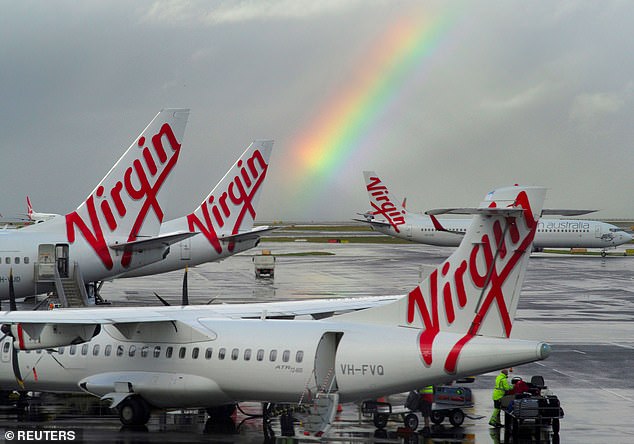 The Boeing 737 was instructed by air traffic control to perform a high-speed descent near Adelaide Airport.

A sudden wind change during the descent resulted in the aircraft’s speed increasing and approaching the maximum operating limit of 340 knots.

The concerned captain abruptly pulled back on the control, disconnecting the autopilot.

It meant sudden changes to the aircraft’s pitch altitude and vertical acceleration as the attendants stood in the rear galley eating a meal.

Both suffered injuries during the incident, the report said, with one ‘badly’ breaking their leg.

It then took over 90 minutes for the crew member to be removed from the plane after touching down in Adelaide.

They were unable to walk or sit in a wheelchair and an ambulance stretcher would not fit down the aisle, the report noted.

Emergency services ultimately dragged the injured staff member to the front of the aircraft using a slide sheet before moving them onto a stretcher.

The ATSB said Virgin has since changed procedures for ground staff responding to emergency services requests, and has updated training and information for pilots on overspeed and overspeed recovery.

Dr Stuart Godley, the bureau’s director of transport safety, said the commercial flight had exceeded its maximum operating speed by one knot.

He said it served as a reminder to pilots that they can decline air traffic control instructions if they believe them unsafe in the circumstances.

Furious NRL fans get locked out of Suncorp Stadium

October 29, 2020
Comments Off on Furious NRL fans get locked out of Suncorp Stadium

October 28, 2020
Comments Off on Mother-of-six Krechelle Carter who weighed 140kg drops HALF her body weight in a year

October 30, 2020
Comments Off on Good Samaritan who sent evidence to solve case of missing Australian grandmother accused of MURDER

October 29, 2020
Comments Off on Australian ISIS member Zainab Abdirahman-Khalif is sent back to jail after appeal overturned’

Naked Australian is arrested ‘after stripping off inside a cemetery’

October 28, 2020
Comments Off on Naked Australian is arrested ‘after stripping off inside a cemetery’

October 30, 2020
Comments Off on Was Sam Mac hungover on Sunrise? Sam and Kochie’s wild claims on live TV

October 30, 2020
Comments Off on Coin collector reveals the rare 5 cent piece that could be worth upwards of $200

The Boxing Day test will take place at the MCG with a crowd of 25,000 people this year

October 28, 2020
Comments Off on The Boxing Day test will take place at the MCG with a crowd of 25,000 people this year
Scott Morrison reveals his favourite Australian animal – and the weird reason he finds them funny