The winning artist of the Archibald Prize for almost a century has typically been a white male – and the face on the canvas has looked much the same.

Artist and Dhungatti man Blak Douglas wants to see that change this year.

But if history is anything to go by, his chances of winning are slim.

“When I was the finalist for the first time in 2015, we found out that 87 per cent of the winning portraits of the past were caucasian male faces,” he told SBS News.

Since 1921, there have been no artists of a non-European background who have won the top prize. 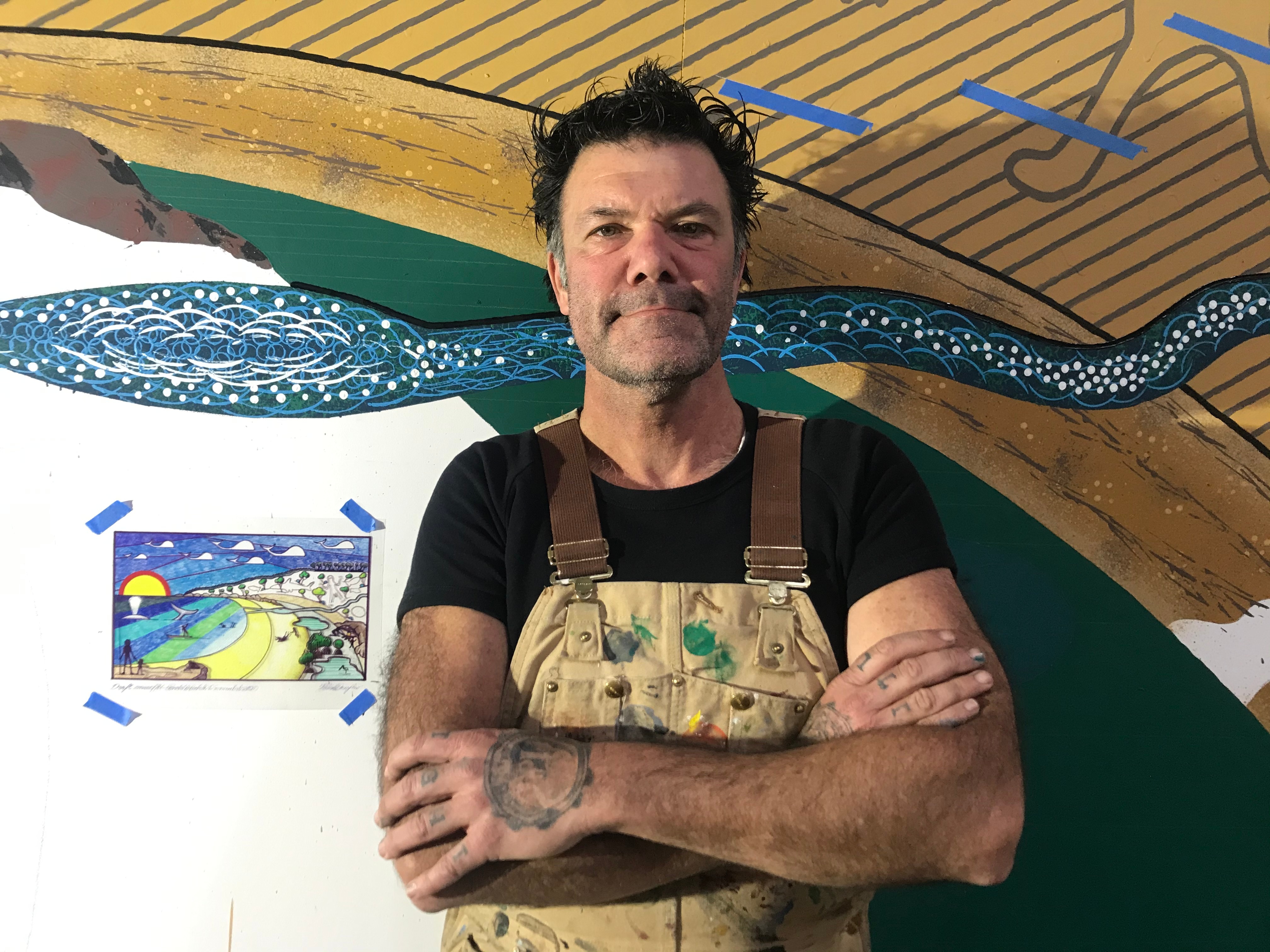 Blak Douglas is hoping to see a change in this year’s Archibald Prize winner.

This year, Douglas has submitted a portrait of 13-year-old Arrernte and Garrwa boy Dujuan Hoosan, who stars in My Blood It Runs, a 2019 documentary about growing up in Alice Springs. The teenager also spoke at the United Nations last year about Australia’s youth detention laws.

Douglas says Dujuan encapsulates the hidden genius and old wisdom of ancient Indigenous culture and offers something different to the competition.

“There has been this predictable but yet unsavoury past history … of painting the lord or painting the master,” he said. 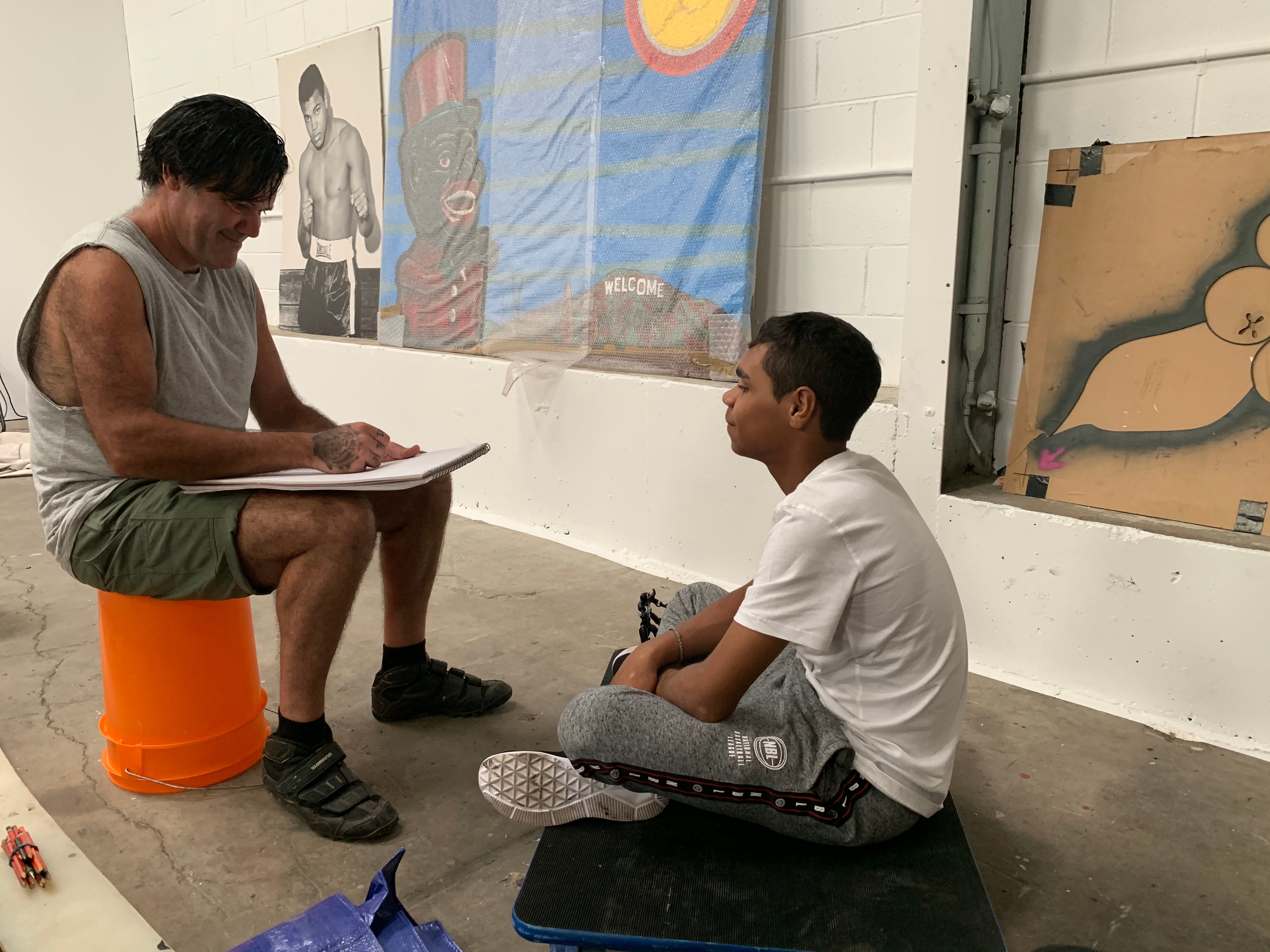 Blak Douglas chose 13-year-old Arrernte/Garrwa boy, Dujuan Hoosan, star of the documentary My Blood It Runs to be his subject for the Archibald Prize.

“Photorealism is what has been the focus of winning portraits of those caucasian portraits of the past; politicians standing in the boardroom with a book. We need to consider looking at art across the board.”

Douglas is not the only person calling for change.

UNSW Associate Professor Felicity Fenner, who specialises in art and design and has curated more than 40 exhibitions, says “the rules that were set down by Jules Archibald 100 years ago are of that generation and of that time and it’s very different to the rules of today”.

She says she would support a change in the terms and conditions of the prize as it would open it up to more diversity. 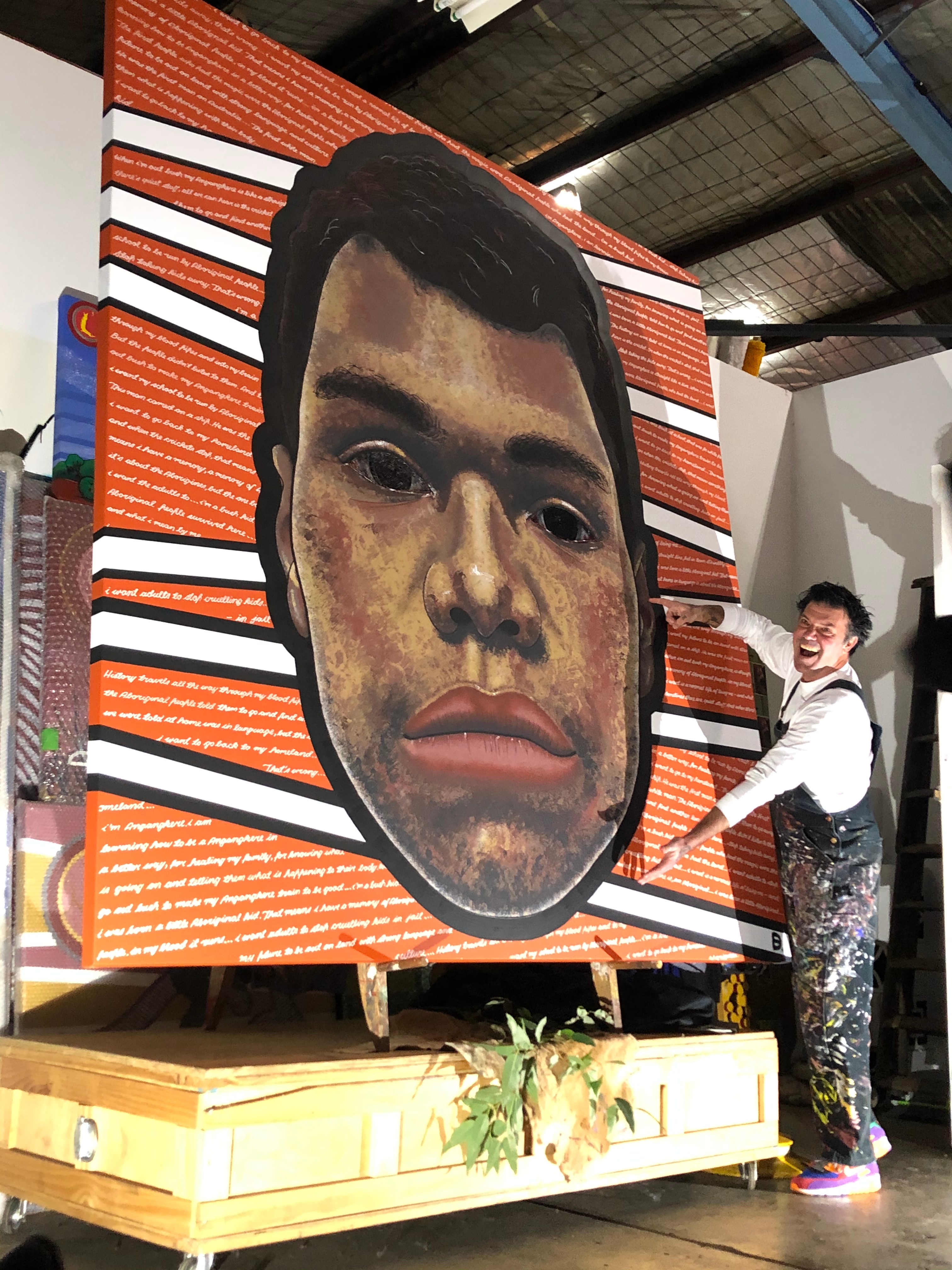 Blak Douglas chose to feature Dujuan Hoosan in his work this year.

“The terms and conditions of the Archibald [subject] … it has to be of a man or a woman who is acclaimed in some way to arts or letters or sciences. Not everybody has access to someone like that,” she said.

“I think it would be fabulous to update the rules and attract more contemporary artists.”

Lesley Wengembo from Papua New Guinea is studying at the National Art School in Sydney and chose not to paint a nationally-acclaimed figure.

Instead, the 23-year-old submitted a portrait of the man he is greeted by each day as he walks into the school; a security guard who has become a mentor to himself and other students.

“It’s a statement, in a way. You see the Archibald is for more of a famous person, but I do a security guard,” he said.

“He plays a part in art, that’s why I feel the connection with the subject and why I paint it.”

As one of only a few Indigenous artists studying at the National Art School, Wengembo says he hopes to see more diversity in the sector. 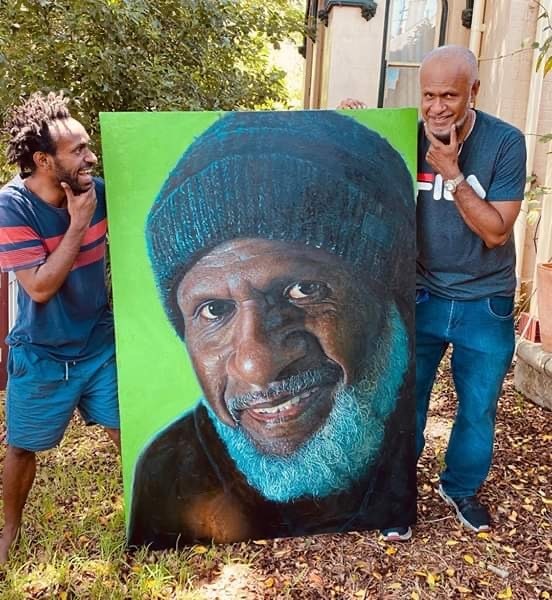 Lesley Wangembo (left) painted security guard of the National Art School (right) for his submission in to the Archibald Prize.

“We have to learn from each other, that’s what I will say – it doesn’t matter what colour or background you came from but it’s all about learning the knowledge of what other people see, and what you see, that’s how you learn.”

There has been a positive shift in recent years towards more diversity in the arts, says Associate Professor Fenner.

“It’s a slow tide to turn, but it is turning,” she said. “The problem with the Archibald is there are no curators choosing the works.

“The curators are the gatekeepers of what gets into exhibitions, including prize exhibitions, and curators have very proactively in recent years, especially in the last five to 10 years, embraced art from diverse cultures.” 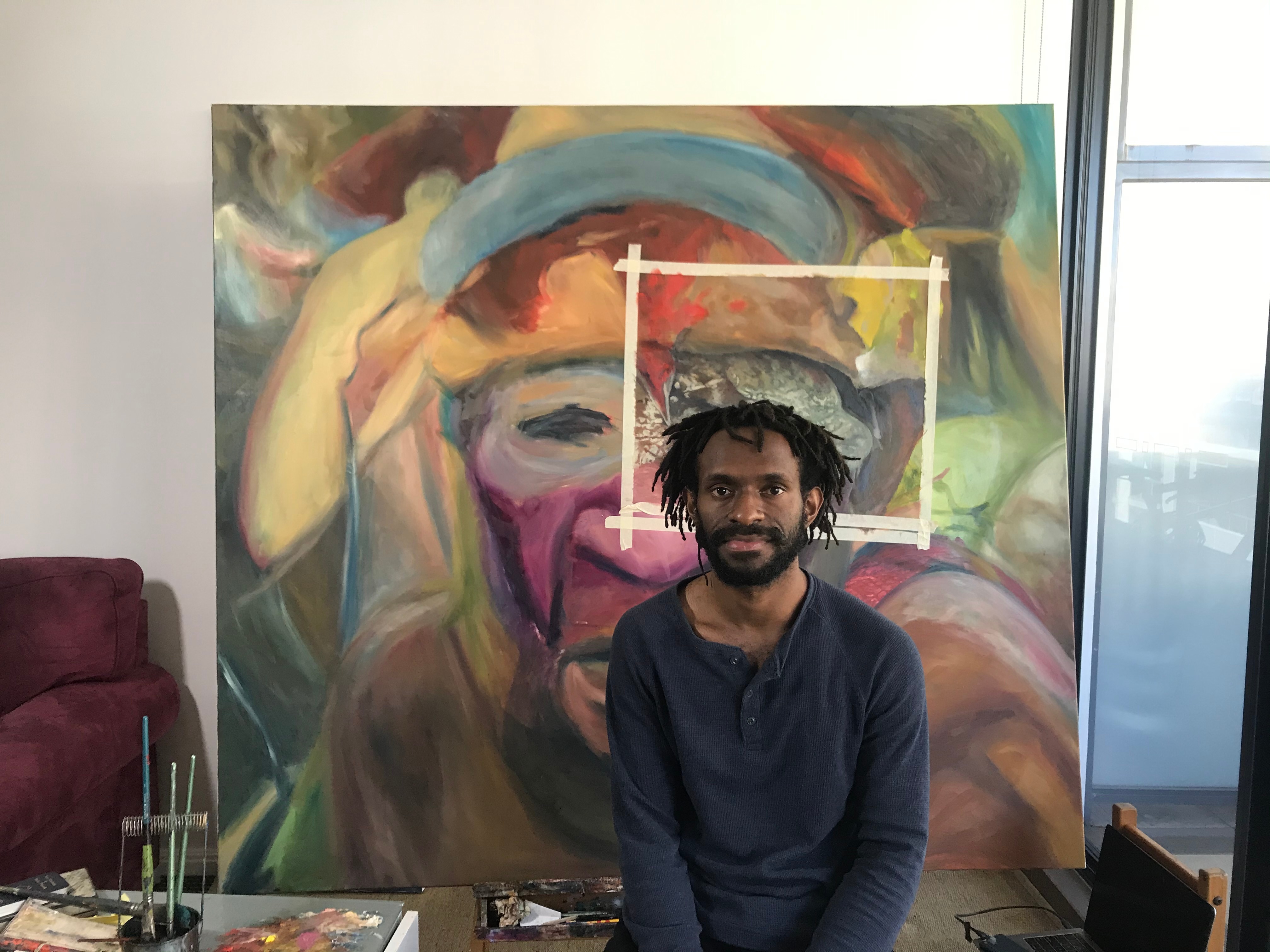 It will be Lesley Wengbembo’s first time entering the Archibald Prize.

In 2016, the Archibald’s Sulman Prize for genre work was won by Pitjantjatjara artist Kaylene Whiskey, and for the past four years the Wynne Prize for landscape has been awarded to an Indigenous artist or collective.

Last year, a portrait of Daisy Tjuparntarri Ward, an elder of the Warakurna community and Ngaanyatjarra people of Western Australia, won the Archibald’s People’s Choice Award, and this year, several entries are by Indigenous artists or feature Indigenous subjects. They include a portrait of former AFL player Adam Goodes by Vincent Namatjira and a portrait of Wiradjuri and Gamilaroi academic Dr Lynette Riley.

Dr Michael Brand, director of the Art Gallery of New South Wales, which hosts the prize, told SBS News it “actively encourages artists of all backgrounds and all communities to enter the Archibald, Wynne and Sulman Prizes, which they did so in record numbers in 2019”.

“While there is yet to be an Indigenous winner of the Archibald Prize, the past five years has seen an almost year-on-year increase in entries into the Archibald, Wynne and Sulman Prizes by artists who have chosen to self-identify as Indigenous,” he said.

“In 2018, Vincent Namatjira was highly commended for Studio self-portrait, which was purchased by the gallery for its collection.”

“We need to think about how we’re going to advance and break the boundaries that exist,” he said.

“Whoever is the [first] First Nations artist to take out the Archibald Prize is the artistic version of Cathy Freeman taking out the 400m.”

The exhibition is open to the public from 26 September to 10 January 2021 at the Art Gallery of New South Wales.