She contracted the virus after her husband, Ron, brought it home from a ski trip in Italy – which was an early hotbed that eventually took the world by storm.

Although her infection cleared after a few weeks, Cusumano still experienced symptoms like fatigue and sensitivity to light.

The symptoms left her bedridden for an entire year.

‘My days used to consist of five appointments, and moving furniture and pitch books and PTA meetings,’ she told DailyMail.com.

‘Three kids, two dogs, I’d stop, come home, make dinner, go back to work. go do another showing. And now, I’ve watched the trees in my backyard bloom, turn to fall, turn to winter and bloom again, all from pretty much the same position in my bed.’

Cusumano has what is known as long-haul COVID-19, a condition in which people exhibit symptoms of the virus long after recovering.

It has left many experts baffled.

She is now featured as part of a new documentary that hopes to raise awareness to her plight, and that of thousands of other Americans. 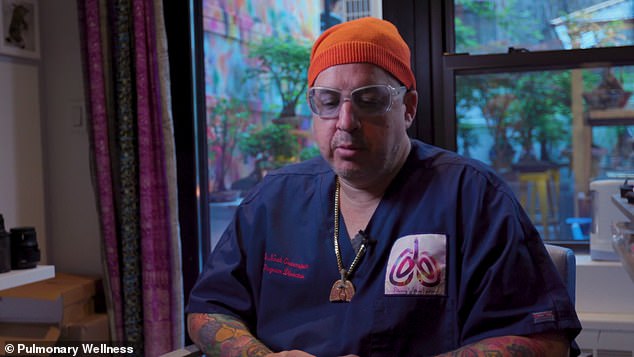 Dr Noah Greenspan (Pictured) has become one of the foremost experts on long-haul COVID in the New York area, and works with patients on treating and managing their long-haul COVID symptoms

Long-haul COVID-19 appears in patients that have recovered from the virus and continue exhibiting symptoms of the virus for weeks, or potentially months or years, after infection.

There are a wide-array of symptoms that can appear, including continued loss of taste and smell, long-term fatigue, or – in Cusumano’s case – long-term sensory issues.

For an entire year she told DailyMail.com she found it impossible to get out of bed and live the life she once did.

At some points, she said, she could not even eat.

Cusumano also had intense sensitivity to light that made it hard for her to even look at her phone screen.

While she is better now, and has returned to work as a real estate broker, she is not entirely out of the clear.

She still feels mild forms of the symptoms everyday, to the point where she even still has trouble going down the stairs in her home.

When she experiences a sensory overload, she goes through what she describes as a ‘flare up.’

Flare ups are caused by anything from physically exerting herself too much, to sudden loud noises around her – like a police siren which once caused a flare up.

More serious flare ups could leave her back in a bedridden state for days at a time, meaning she has to be on alert at all times to avoid triggering a flare up.

‘[I see] a puppy, and I want to play with everybody and run around [with it] but I can’t,’ Cusumano explained.

‘I have to reel it in so tight because the looming flare up is just a breath away, and it’s so devastating when I go back into a flare up because you think: ‘Okay, I’m feeling like myself again and I’m a little better and maybe this is over this time,’ and boom, it’s not over, and you’re back.’ 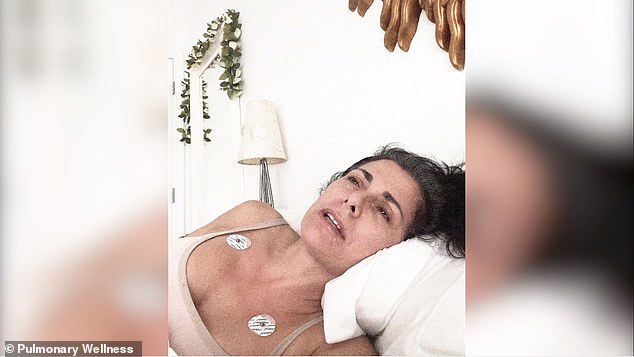 While Cusumona is past the worst stages of her bout with long-haul COVID, she still can experience flare ups that leaves her bedridden for days at a time

The causes for long-haul COVID, outside of getting the virus itself, are unknown, though patients who did not receive any professional treatment for the virus while infected are more likely to develop these long-term symptoms.

Cusumano went to every specialist she could find to figure out what was wrong with her, but none of them knew how to help.

She said that all screenings and tests she took during the time showed that she was healthy, though that obviously was not the case.

‘I’ve kind of given up on the doctors, bless their hearts,’ she said.

Greenspan had taken an interest in long-haul COVID patients from when he first heard about the condition, and wanted to dig in to find out what was happening.

He said he first became aware of long-haul COVID when he heard of many patients, often women in their 30s through 50s who were in relatively good health, experiencing severe COVID symptoms long after having the virus.

As an expert in respiratory care, he was already familiar with what COVID could do to a patients body, but these cases were different than anything he had seen before. 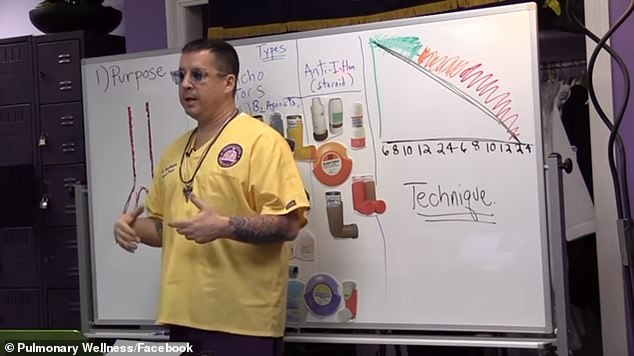 Dr Greenspan is doing research to better understand long-haul COVID, why it appears in certain patients and what can be done to treat it

‘Usually people with severe COVID, people who either had severe cases, people that were hospitalized, people that were in the ICU…they don’t have the same type of situation as long haulers,’ Greenspan told DailyMail.com.

‘These people, although they were very very ill, once they kind of get on the road to recovery it’s been a fairly predictable uphill climb for them.

‘The long-haulers is just just a situation in which uncertainty is the major theme of everything that happens.’

He since launched the first ever freestanding treatment clinic for long-haul COVID in New York City, and offers a free online COVID rehabilitation bootcamp that he says has helped almost 300 people deal with life after COVID.

Greenspan said he can not make a good estimate of what percentage of COVID patients will develop long-haul symptoms and estimates it could be as low as only 10 percent or as high as 90 percent.

He has become an important figure for many in the New York area who do have the condition, though.

‘I was so desperate and so freaked out as to what was happening to me, and, they didn’t even coin it long-haul or anything yet because they didn’t know this was happening,’ Cusumano said of the path that led her to meeting Greenspan.

‘I was alone in what I thought was my own plight, and then slowly but surely we started figuring out this is happening to a lot of people.’

She eventually became part of an online support group led by Greenspan, where long-haul patients could have a safe space to discuss their condition and the trauma of dealing with it with one another.

Cusumano eventually became a patient of Greenspan’s clinic, where he gave her individualized, specialized care that helps her manage her symptoms.

Greenspan is hoping that by working with these patients he can learn more about the condition.

Experts do not know how long long-haul symptoms may last.

They know they can last for at least a year, as many are still dealing with symptoms today after having COVID 15 months ago, but they are not sure if this is something that will wear off, or will last for the rest of peoples lives. 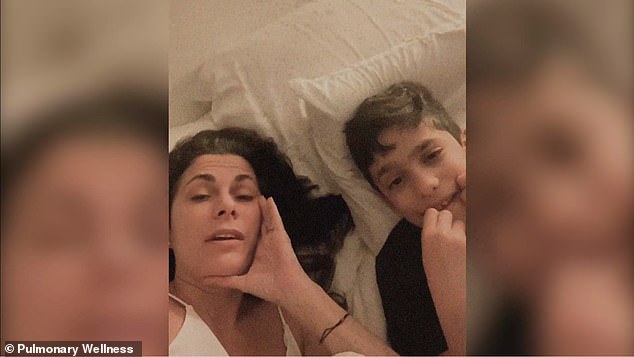 Cusomano began video logging her experiences with long-haul COVID as an outlet for her struggles. Those videos will not feature in the documentary ‘Long Haul’ 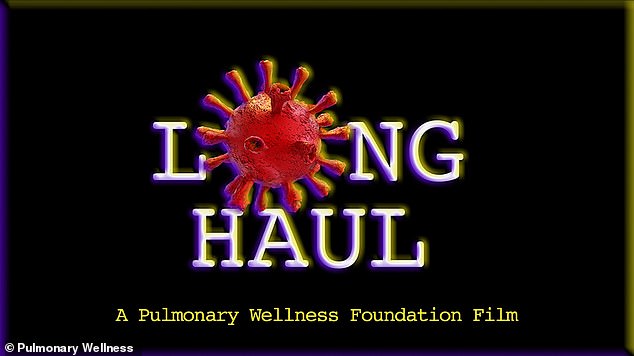 Like Cusumano, a majority of patients who suffer from it do not have any obvious cause for their condition other than knowing it has something to do with contracting COVID-19.

Some believe the vaccine could help treat symptoms, like it did for Cusumano, who said she felt much better after getting her first shot.

Greenspan says cases like hers could just be anecdotal evidence, though, as he has seen cases of the vaccine not effecting peoples recovery at all.

He is hoping that these cases don’t get swept under the rug as America returns to normal post-pandemic, and that awareness – and most importantly funding for research – about long-haul COVID grows.

The doctor is releasing a documentary called Long Haul, which features 20 long-haul COVID patients telling their story of dealing with these conditions long after having the virus.

Cusumano’s story is among those told in the film, and video journals she filmed while she was stuck in bed for a year feature in the documentary. 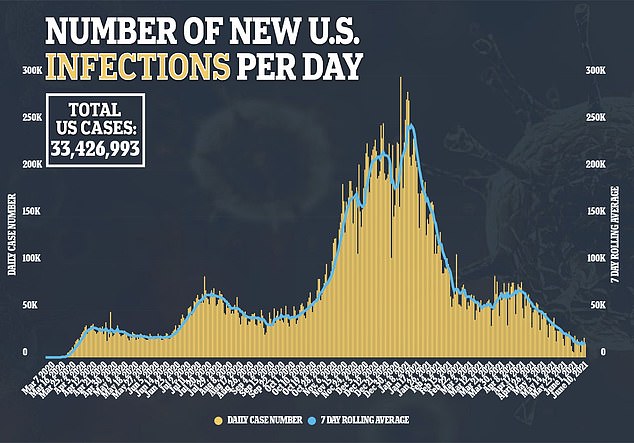 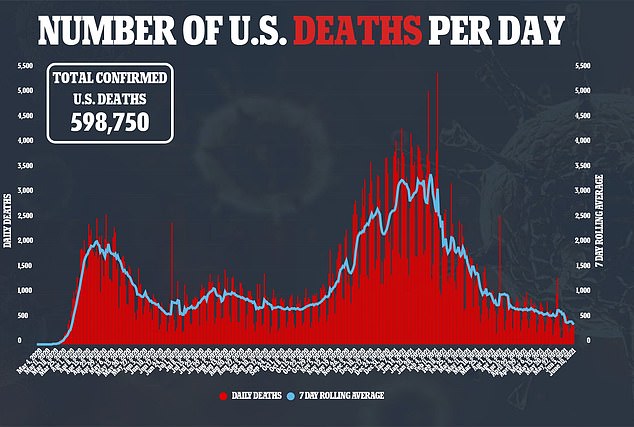 ‘I usually would journal, just to get thoughts out, but I didn’t have the strength to write,’ she said of her video diaries.

‘So I just started doing a video diary, just to have a outlet for all that was happening and how much my head had to take in that this was reality, never thinking they’d be used for anything.

‘It was just my personal outpouring.’

The video diaries give an interesting look into the real day-to-day life of someone dealing with a severe case of long-haul COVID, she added, because usually when people with serious conditions are being recorded they are in a better state than usual.

Greenspan is hoping his film can show the real emotional toll dealing with a condition as bad as Cusumano’s can have.

‘My hope is that as people do return to normal that they don’t push to the side this whole population of people that are still right in the mix of it, and don’t have the opportunity to return to their normal, and may not for a very long time,’ he said.

‘I want people to understand that these people didn’t necessarily do something to catch COVID, it was just really bad luck of the draw.’

Long Haul does not yet have an official release date.